TYSON FURY showed off his stunning £300,000 Ferrari as he prepares to sign a contract to fight Derek Chisora. Fury is a known car lover, ownin

TYSON FURY showed off his stunning £300,000 Ferrari as he prepares to sign a contract to fight Derek Chisora.

Fury is a known car lover, owning a collection of luxury motors with his black Ferrari GTC4Lusso among his favourites.

The Gypsy King posted the supercar onto his Instagram after confirming he will make a boxing comeback to face Chisora again.

He twice beat his heavyweight rival – in 2011 and then 2014 – before the pair later went on to enjoy a friendship.

But lately, the relationship has soured leading to talk of an unlikely trilogy bout between the two.

According to ESPN, the fight is targeted for December in Wales, where Anthony Joshua has twice headlined. 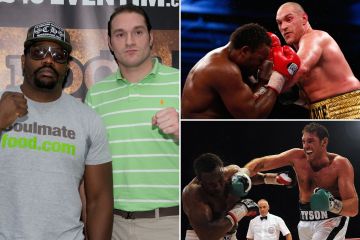 Fury’s trilogy with Chisora eyed for December at 75,000-seat stadium

And it is claimed Goldstar Promotions – the company that handles Fury’s meet-and-greets across the UK – are behind the offer.

That is despite Hall of Fame pair Frank Warren and Bob Arum leading the WBC champion’s career in recent years.

The Gypsy King and Chisora always maintained they had a verbal agreement in place for a third fight together.


Fury's trilogy with Chisora eyed for December at 75,000-seat stadium

SON OF A GUN

'PAINS ME TO SAY IT'


Hearn admits Fury is currently the best heavyweight ahead of Joshua

But after Chisora picked Joshua and Dillian Whyte to beat Fury, their friendship was no more.

It has led to recent back and forth between the two and Chisora, 38, demanded a contract be sent his way.

“Tell them you want to hang out with me, OK? And send me the paperwork bitch.”

But Fury hit back: “I don’t need to speak to anybody.

“I spoke to your management team, we’re all good. Everything is sorted, looking good. Contract be over or a day or so.

“Peace out, you’re getting knocked out.”

Loading...
Newer Post
Maisie Smith dances in her bikini as she posts defiant video about her ‘thunder thighs’
Older Post
Michael Owen jets off on holiday BEFORE meeting Luca – while Love Island star posts snap of Gemma in bed

Does it cost more to run an electric blanket or fill a hot water bottle? 0