Lee Macmillan, who became a viral star with her vanlife travel account, takes her own life
Paris Fury cradles her baby bump in a halterneck dress as she reveals she is past 20-week mark
Gold Coast woman found in charity bin not homeless as rumours swirl she was a known 'bin diver'

A senior executive at Channel Seven has revealed why so many prime-time shows run for an exhausting 90 minutes these days.

The average running time for a reality or entertainment program starting at 7:30pm used to be an hour, but now they’re going until 9pm or even later.

Andrew Backwell, Head of Production at Seven, explained to TV Tonight that networks are ‘stretching’ their major shows until later because programming is becoming more expensive. 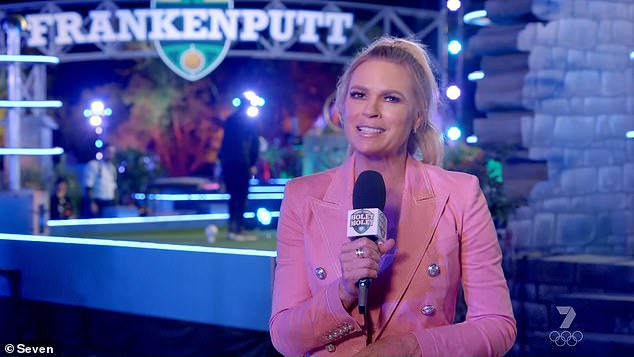 Mystery solved: A senior executive at Channel Seven has revealed why so many prime-time shows run for an exhausting 90 minutes these days. Pictured: Sonia Kruger hosting Holey Moley, which airs on Seven from 7:30pm to 9pm

‘As things have become more expensive you have to try and stretch your big tentpoles to later,’ Mr Backwell said.

He added that networks aren’t ‘investing heavily’ in shows starting at 8:30pm or 9pm because ‘we just don’t have the money to do it’.

The trend of running feature-length programs from 7:30pm isn’t going anywhere because now all the major stations are doing it, Mr Backwell noted.

If one network were to cut its prime-time flagship down to 60 minutes, it would run the risk of the viewer flipping channels at 8:30pm.

‘So these days if everyone is doing 90 [minutes], you kind of have to, unless you have a very dominant show,’ he said.

‘Also in terms of advertising costs, it’s much cheaper to do a 90 than just 60, when you’re investing so much money.’

This trend of running 90-minute shows in prime time is fairly unique to Australia, which has almost no major programs starting after 8:30pm.

Other countries, such as the United Kingdom, have plenty of popular shows that don’t start until 8:30pm or 9pm.

For example, SAS: Who Dares Wins airs from 9pm on Channel 4 in Great Britain. The Aussie version, SAS Australia, starts at 7:30pm on Seven.

However, it is quite commonplace in the U.S. to have extremely long reality shows, with The Bachelor being a prime example.

‘We really want kids to watch this, and not to abandon the last half hour,’ he told TV Tonight.

Other reality shows that run for 90 minutes include Channel 10’s The Bachelor Australia and I’m a Celebrity… Get Me Out of Here, and Nine’s Married At First Sight.

Loading...
Newer Post
Roman soldier's payslip from 1,900 years ago reveals he was left BROKE after military deductions
Older Post
Florida crossing guard hailed a hero after saving 7-year-old from getting struck by car

People are more likely to donate to charity if they benefit in some way, study shows

People are more likely to donate to charity if they benefit in some way, study shows 0

Marv Levy's advice for Bill Belichick on his football future: 'You just coach as long as you love it' 0