Tiny crustacean snaps its giant claw shut 10,000 times faster than the blink of a human EYE

A tiny shrimp snaps its claw in less than 0.01 seconds, around 10,000 times quicker than the blink of a human eye. The movement is so rapid it crea

Surface of Mars looks maroon… but it's just NASA's camera on the blink
'Gone in the blink of an eye': Alabama family escapes minutes before suspected twister flattens home
OnePlus 9 Pro review: powerful and recharges in a blink, but at what cost?


A tiny shrimp snaps its claw in less than 0.01 seconds, around 10,000 times quicker than the blink of a human eye.

The movement is so rapid it creates an audible pop above the water and produces bubbles.

Males of the species Dulichiella cf. appendiculata are only tiny, roughly the size of a sunflower seed, but 30 per cent of their body weight comes from its one huge claw.

The engorged claw shuts in just 93 microseconds, moving at around 38 mph. Human eyes take about 150 milliseconds to complete the process of blinking. 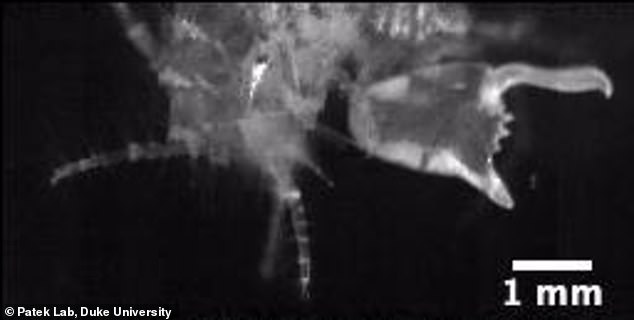 Males of the species Dulichiella cf. appendiculata are only tiny, less than a centimeter long, but 30 per cent of their body weight comes from one huge claw. (pictured bottom right of image, the large claw)

Researchers from Duke University in the US say the shrimp combines a unique set of traits which make the speed all the more impressive.

It is not the fastest appendage movement in the animal kingdom, with the jaws of some terrestrial animals matching and exceeding its velocity.

For example, it is similar in speed to the trap-jaw ants but the ants do not have to contend with the slowing effect of water, which the shrimp does.

The tiny size of the shrimp’s body sets it apart from the Mantis shrimp, also known as the ‘smasher shrimp’, which is much larger and rapidly extends an appendage to hit rivals and evict them from their shells in order to claim it as its own home.

Jellyfish stinging cells, the researchers note, are also aquatic and eject at a quicker pace than the tiny shrimp clicks, but this only happens once whereas the diminutive crustacean can repeat its clicking movement.

‘We take repeatability for granted in biology,’ said Sarah Longo, a visiting assistant professor at Towson University and study author.

‘Lots of ultrafast movements are not repeatable, such as ballistic seed ejection by plants.

‘Some of these seeds are going even faster than this amphipod and traveling an impressive distance, but they are one-off events.’

Professor Sheila Patek from Duke says the shrimp species are crucial to our wider understanding of nature’s physical limits. 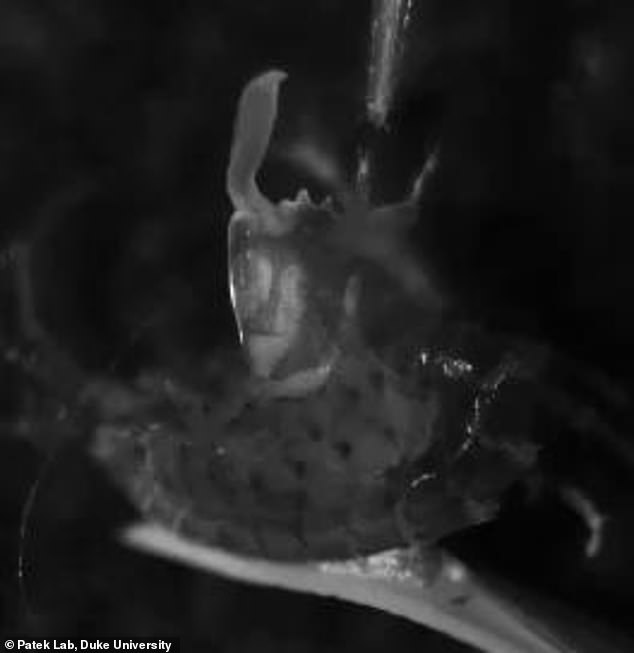 The engorged claw shuts in just 93 microseconds, moving at around 38 mph. Human eyes take about 150 milliseconds to complete the process of blinking 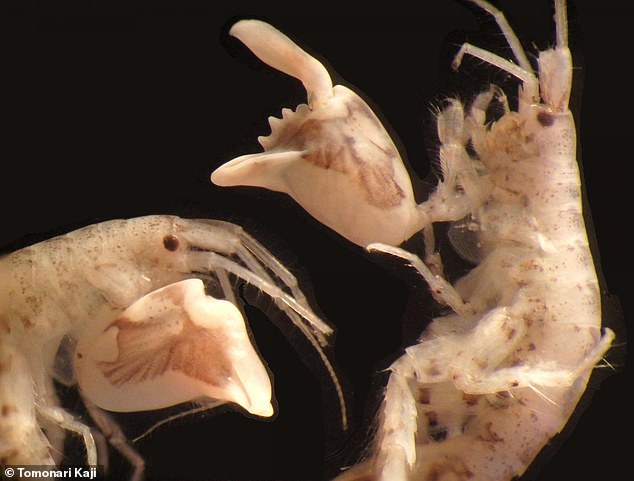 Professor Sheila Patek from Duke says the shrimp species are crucial to our wider understanding of nature’s physical limits. She believes if the shrimp was to close its claw any faster, its body would likely not be able to cope with the force and break

The hyper-aggressive mantis shrimp has evolved extreme power and weapons to help it outmuscle rivals for desirable burrows.

But it also carefully surveys new homes before deciding whether or not to launch an offensive, new research shows.

It is equipped with a club-like appendage which is used to rapidly strike opponents at speeds of up to 50mph.

So powerful are these creatures that they have been given the moniker ‘smasher shrimp’ due to their ability to break aquarium glass.

She believes if the shrimp was to close its claw any faster, its body would likely not be able to cope with the force and break.

‘There appears to be a cutoff where you are going so fast that you inherently have to give up repeatability,’ she says.

‘These organisms are doing things with capabilities that we currently cannot build.

‘Engineered systems that can be used repeatedly are several orders of magnitude slower and bigger than these animals.’

These crustaceans are common and the ones for the research were found off a dock at the Duke Marine Lab in North Carolina.

The shrimp thrives in cool, scummy water and lives on a diet of dead algae, seaweed and other plants and animals.

Snaps from the shrimp are so violent they can create water jets as well as producing small bubbles via a phenomenon known as cavitation. It occurs only when there is a rapid change to water pressure.

Professor Patek explains: ‘Cavitation is an extremely potent effect. It’s one of the most energetic events on planet Earth. It’s remarkable that these tiny creatures can cause it.’

Despite the energy-intensive process being widely observed in the animal’s behaviour, the researchers do not yet know how or why they do it.

‘The claws make up a third of a male’s body weight,’ Professor Patek explains.

‘We want to know why they invest so much into this action, whether it plays into male-female interaction or territorial disputes. That’s something we’re excited to pursue.’

Podcast helped in hunt for 1996 killer of California student