Just when you thought things couldn't get any worse... now's the time to toll the bells, wear black and really prepare for trouble.For Merlina, the

Photographer captures murmuration of starling birds form into shape of a giant bird
Emu mysteries unveiled: How the iconic bird spread across Australia over 6,000 years
The 600kg flightless bird that once roamed Australia – as 10 million year old skull found


Just when you thought things couldn’t get any worse… now’s the time to toll the bells, wear black and really prepare for trouble.

For Merlina, the 14-year-old Queen raven of the Tower of London is missing, presumed dead and, according to myth and legend, the presence of these birds is vital to the survival of the kingdom.

She flew off one night shortly before Christmas for her evening constitutional and, to the shock and dismay of Christopher Skaife, Yeoman Warder Ravenmaster at the Tower of London, she never came back.

‘She just disappeared! We’ve been looking and looking. I’m always looking. It’s been weeks now,’ he says in a choked voice.

Because while Chris loves all his ravens with a passion that drives his wife Jasmine ‘insane’, Merlina was always a bit different. 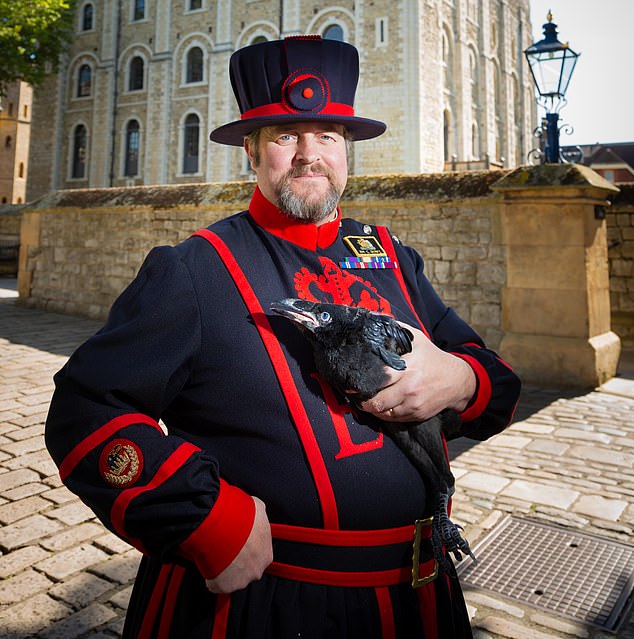 Merlina, the 14-year-old Queen raven of the Tower of London is missing, presumed dead and, according to myth and legend, the presence of these birds is vital to the survival of the kingdom. Pictured: Ravenmaster Chris Skaife at The Tower of London

Wild, free-spirited and cheeky — forever stealing tourists’ sandwiches and Pringles — she was also unusually loving for a raven.

‘We had a special relationship. I was her human buddy. She always knew where I was and kept her eye on me,’ he says.

They also communicated constantly. ‘We used a special clicking noise — like a knock-knocking sound,’ he says. ‘So she’d chat with me and allow me to stroke her beak.

‘She was quite affectionate. I’d never use the term ‘favourite’, but, well… I do have a tattoo of her on my calf.’

If confirmed, Merlina’s death would bring the number of ravens at the Tower to seven. As legend has it, any fewer than six and, well, everything will turn to dust.

Charles II is thought to have been the first to insist that the ravens of the Tower be protected after he was warned the crown and the Tower itself would fall if they left.

And this is a prospect which has already whipped social media users into a frenzy. 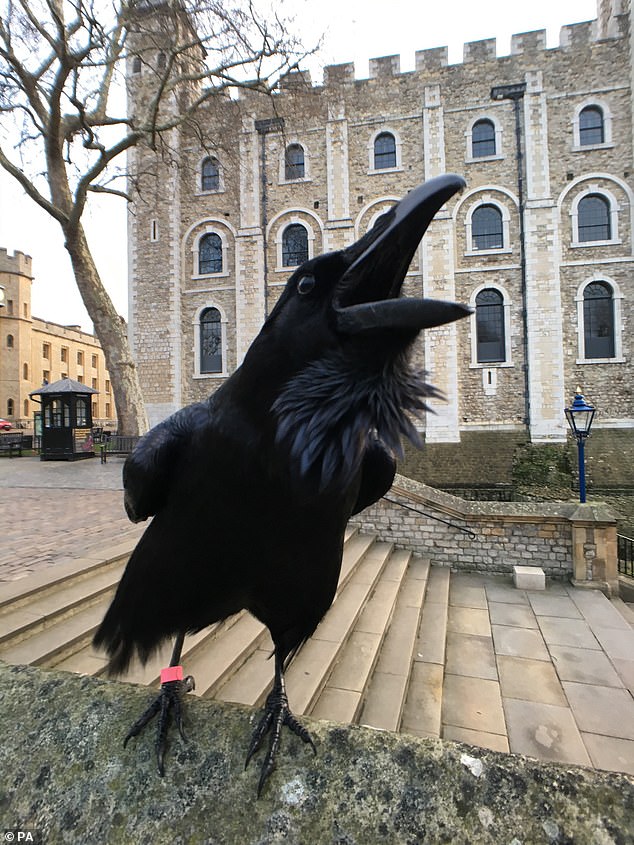 She flew off one night shortly before Christmas for her evening constitutional and, to the shock and dismay of Mr Skaife, Yeoman Warder Ravenmaster at the Tower of London, she never came back. Pictured: Merlina 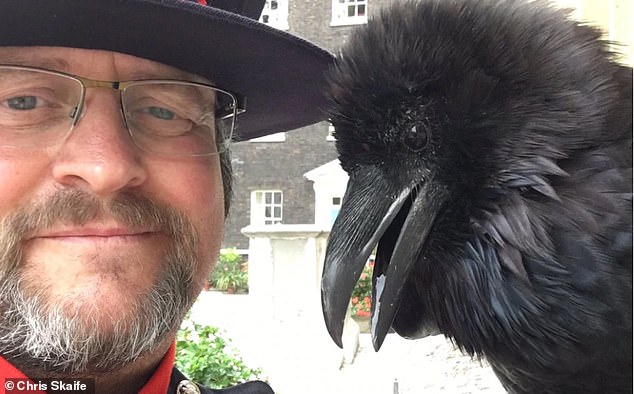 Another said: ‘After 2020 what can go worse in 2021… and it starts with ravens leaving the Tower of London.’

A third wrote: ‘Now, I’m not superstitious in the slightest. But we don’t need this adding to 2021.’

Chris, meanwhile — who became a Yeoman Warder in 2006 and has held the highly coveted post of Ravenmaster since 2011 — is far more worried about his beloved Merlina than the threat to the kingdom.

‘We do have seven ravens here at the Tower of London, six by royal decree. And, of course, I still have a spare one, so we’re OK, at the moment,’ he says, adding: ‘And we also have an active breeding programme. But it is desperately sad.’

While Chris admits to shedding ‘quite a few tears’, back at the Tower, all but one of Merlina’s seven glossy black pals appear unperturbed.

Indeed, for six of them, it’s just business as usual — perching, roosting, flitting from the Tower battlements to their smart, purpose-built house.

And, of course, gobbling through their daily ration of 6oz of fresh meat, hard-boiled eggs, biscuits soaked in blood, the occasional rabbit and, in non-Covid times, however many sausage rolls, sandwiches and crisps they can steal from visitors. 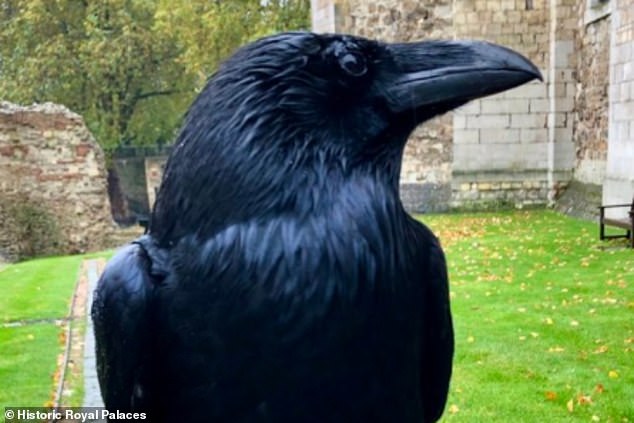 Merlina, the 14-year-old ‘free-spirited’ raven who arrived at the Tower as a chick in 2007, has not been seen at her home at the 11th Century castle for several weeks and is feared dead

But not so for one young buck called Jubilee, aged nine, who had fallen for Merlina shortly before her disappearance, bonded firmly and now looks down in the dumps.

They are also fantastically clever, with a cognitive ability thought to rival that of chimps and donkeys.

All of which means they are curious, naughty, excellent mimics (of crows, blackbirds and even humans — squawking ‘good morning’ to visitors) and get bored easily.

During last year’s lockdown and missing all their usual attention, some started dive-bombing members of staff, which was intimidating given they grow up to 2 ft high, with a wingspan of up to 4 ft, and are equipped with a vicious beak and powerful talons.

Merlina was, of course, the cleverest of the lot, with an avid following on social media. ‘She was a highly intelligent raven. One of the very smartest,’ says Chris. Her party tricks included lying upside down with her legs in the air, ‘pretending to be dead until visitors started crying ‘A raven’s dead! A raven’s dead!’ in alarm’.

Despite the brutal hours of a Ravenmaster — he’s up at 5.30am every day — and the burden of responsibility the role imposes (‘it is my job to ensure that they stay at the Tower’), Chris buzzes when he talks of his beloved charges.

‘I’ve been building up to this all my career,’ he says. ‘It’s an honour and a privilege.’ He had previously served 24 years in the infantry as a member of the Princess of Wales’s Royal Regiment during which he was posted to Germany, Kosovo and Northern Ireland. 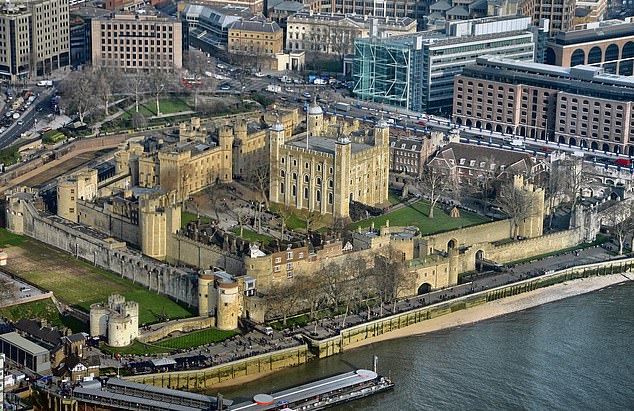 Like all yeoman warders — better known as Beefeaters — he had to have a minimum of 22 years exemplary service to even qualify for an interview at the Tower.

He and Merlina joined the same year. He, as assistant to the then Ravenmaster and she as a young wild bird from South Wales.

Ever since, he has spent every waking hour with her and the other birds and misses them desperately when he’s on holiday.

During his tenure at the top, he has made important changes: smart new overnight enclosures, a breeding programme which produced chicks in 2019 and in 2020 and, most importantly, a new ‘minimum wing-trim policy’.

Traditionally, the birds had their wings trimmed quite severely to reduce the distance they could fly. However, Chris wanted the birds in his care to feel wilder, freer and even to fly off.

‘I wanted them to stay at the Tower because they chose to, not because they were prisoners,’ he says. ‘That’s my proudest achievement.’

This is not, of course, the first time disaster has struck for the Tower’s ravens.

During World War II, just three — Mabel, Grip and Pauline — survived the bombing. But Pauline was killed soon afterwards and the other two died mysteriously, causing Winston Churchill to hurriedly order the flock back to full size.

In 2013, two Tower ravens were killed by a red fox that managed to infiltrate the grounds, and since Chris Skaife took over, one raven called Munin escaped, but was captured by a member of the public and swiftly returned.

Who knows? Perhaps Merlina will surprise us yet. Maybe she just fancied a change of scene — somewhere a bit sunnier, perhaps?

But I think we both know she’s more likely to have made her way to that great perch in the sky. After all, she’d never leave Chris for so long, unless she had to.

Ted Nugent tests positive, has to 'crawl out of bed'; herd immunity may not be likely in US, some experts say: Live COVID-19 updates

Global infections growing at record pace despite vaccines; herd immunity may not be likely in US, some experts say: Live COVID-19 updates

Ted Nugent tests positive, has to 'crawl out of bed'; herd immunity may not be likely in US, some experts say: Live COVID-19 updates 0

Global infections growing at record pace despite vaccines; herd immunity may not be likely in US, some experts say: Live COVID-19 updates 0

Allegiant Air aims for pandemic vacationers with flights to 3 new cities, including Jackson Hole and Portland 0