Stroke victims to get hallucinogenic drug DMT to stave off worst effects of life-threatening condition in first-of-its-kind trial, sc


Stroke victims to get hallucinogenic drug DMT to stave off worst effects of life-threatening condition in first-of-its-kind trial, scientists say

By Luke Andrews For Mailonline

A hallucinogenic drug given to stroke victims as they are rushed to hospital could minimise the damage inflicted on brain cells, scientists say.

Strokes happen when the blood supply to the vital organ is cut off by a clot or burst vessel, risking death in some crucial nerve cells by starving them of oxygen.

But researchers argue their medication – called DMT or dimethyltryptamine – could ward off the worst effects by sparking the growth of new neurons, fast-tracking the healing process.

It will be tested in first-of-their-kind trials in the US, where the psychedelic drug will be administered to patients in the back of ambulances. It will be given in doses too small to trigger hallucinations – but scientists say they should still confer benefits.

Tests could start as soon as next month, if they get the go-ahead from regulators.

Previous studies on DMT have shown it improved motor-function and triggered the formation of new brain cells in rats whose organ was damaged. 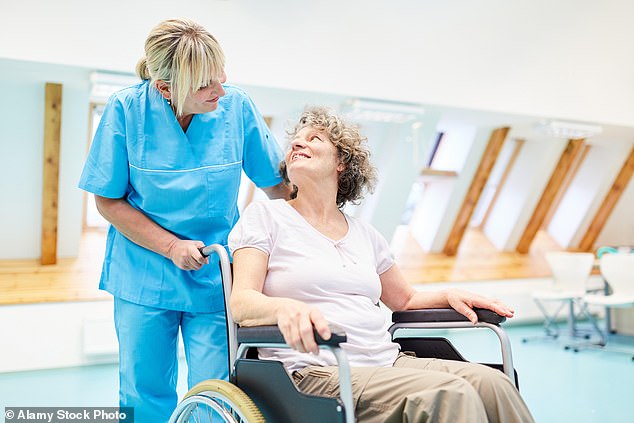 Strokes happen when the blood supply to the brain is disrupted, which can trigger death in some nerve cells. But scientists say the drug DMT – or dimethyltryptamine – could ward off some of the worst effects of the condition (stock)

Its CEO Christopher Moreau, who is a life sciences expert and previously ran a company treating prostate cancer, said the drug will help the brain heal.

‘Since we’re dealing with stroke patients, we will be using the sub-hallucinogenic dose, which in pre-clinical studies has still shown to improve neuroplasticity,’ he told Metro.co.uk.

‘It will help the brain heal even though patients aren’t having the psychedelic experience, and we really don’t want that if your patient has just had a stroke.’

He added: ‘The sooner you can start to treat post-injury the better.

‘DMT may not benefit hemorrhagic (stroke victims), we don’t know, but we’re hoping it won’t cause them any problems because then we don’t have to wait for the CT scan, we can treat in the ambulance.’

He said within hours of a stroke studies show the brain starts trying to rewire itself, which he hopes this drug can accelerate.

There is ‘little’ immediate treatment available for stroke victims because doctors need to know which type someone is suffering from. 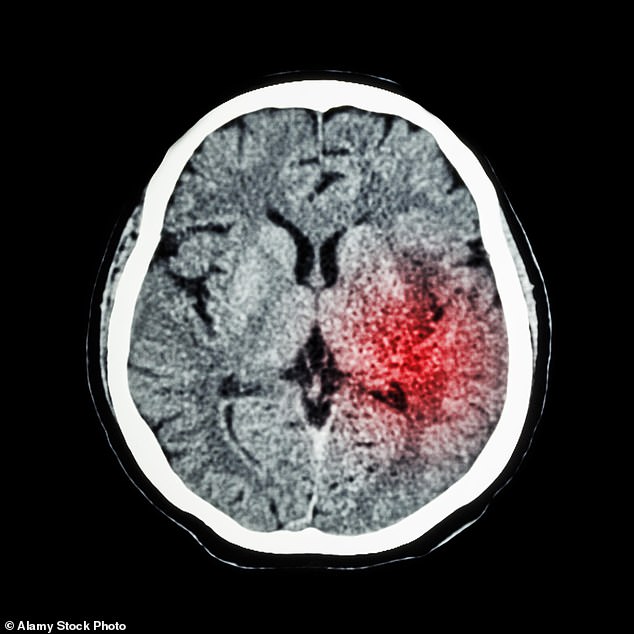 Pictured above is a scan of an ischaemic stroke. This is when a blood vessel in the brain is blocked, cutting off the vital supply of oxygen and nutrients to the surrounding cells

Giving someone the wrong medication for the type of stroke they are suffering could be fatal, said Mr Moreau.

If the Phase 1 trials are successful Algernon plans to push US regulators to approve their treatment for use more widely.

Its stage 2/3 trials will involve following up stroke victims over the short and long term, to establish the benefits of the treatment.

THE CAUSES OF STROKE

There are two kinds of stroke:

An ischemic stroke – which accounts for 80 percent of strokes – occurs when there is a blockage in a blood vessel that prevents blood from reaching part of the brain.

The more rare, a hemorrhagic stroke, occurs when a blood vessel bursts, flooding part of the brain with too much blood while depriving other areas of adequate blood supply.

It can be the result of an AVM, or arteriovenous malformation (an abnormal cluster of blood vessels), in the brain.

Thirty percent of subarachnoid hemorrhage sufferers die before reaching the hospital. A further 25 percent die within 24 hours. And 40 percent of survivors die within a week.

Age, high blood pressure, smoking, obesity, sedentary lifestyle, diabetes, atrial fibrillation, family history, and history of a previous stroke or TIA are all risk factors for having a stroke.

SYMPTOMS OF A STROKE

Of the roughly three out of four people who survive a stroke, many will have life-long disabilities.

Both are potentially fatal, and patients require surgery or a drug called tPA (tissue plasminogen activator) within three hours to save them. THE CAUSES OF STROKE

Jaguar to transition to all electric vehicles, Land Rover to go majority electric 0