Sofia Richie has been linked to a few men since breaking things off with Scott Disick in the summer, most recently seen canoodling on the beach in


Sofia Richie has been linked to a few men since breaking things off with Scott Disick in the summer, most recently seen canoodling on the beach in Miami with billionaire shipping heir Gil Ofer.

On Friday evening however, the 22-year-old model daughter of Lionel Richie – who is reportedly ‘still single’ – was spotted grabbing dinner with her long-time friend Jaden Smith, 22, in Santa Monica.

The pair stepped out after a grabbing a table for two at Giorgio Baldi amid LA County’s newly reopened outdoor dining, after Smith and Richie said in the past that they are ‘just friends.’ 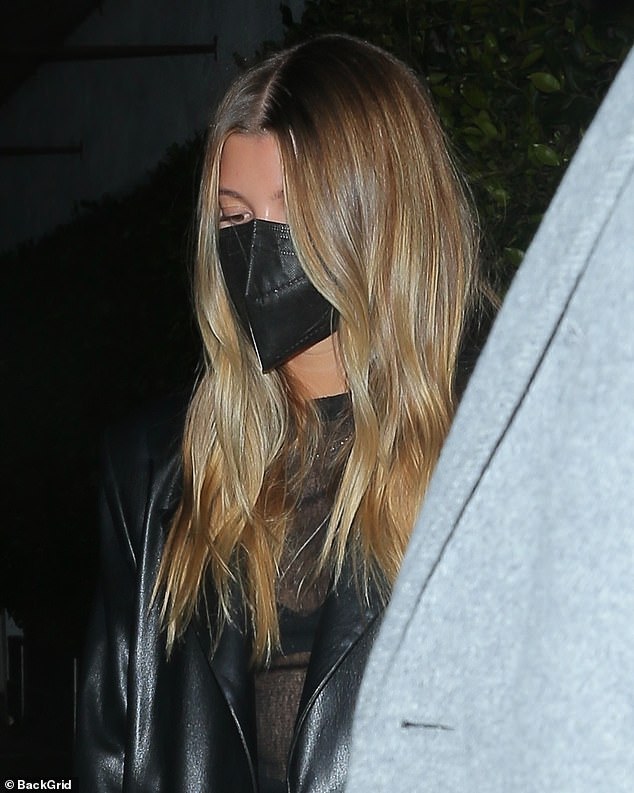 Single life: Sofia Richie, 22, grabs dinner in Santa Monica with Jaden Smith, 22, after shutting down dating rumors in the fall, amid reports she is ‘still single’ despite packing on the PDA with billionaire shipping heir Gil Offer in Miami

Richie looked cool in all black as she stepped out in a leather jacket and jeans with a sheer bodysuit, appearing makeup free for the outing.

The singer-actor son of Will Smith and Jada Pinkett kept it casual in distressed jeans with painted accents and a bomber jacket over a hoodie, throwing on a pair of fresh white New Balances.

Both were suited up in face masks for the outing, continuing to protect themselves from the relentless COVID-19 virus following a major spike and two month stay-at-home order in LA. 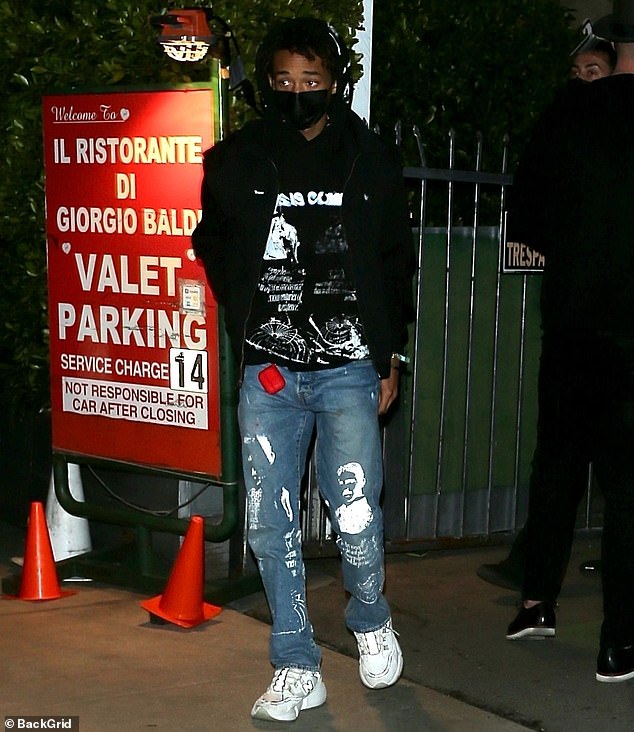 Daring choices: The singer-actor son of Will and Jada rocked painted accents on his jeans and a graphic hoodie with a pair of New Balances

When the pair were first spotted getting a bit handsy on the beach on Labor Day weekend, many were quick to guess that there was a budding romance.

Both shutdown any speculation that their 10 plus year friendship was anything more, with Smith telling Ryan Seacrest on his iHeartRadio show, ‘We’re just homies and we love each other.’

He also added that the longtime pals have been going to the beach together for nearly a decade, calling the day in question pure ‘fun.’ 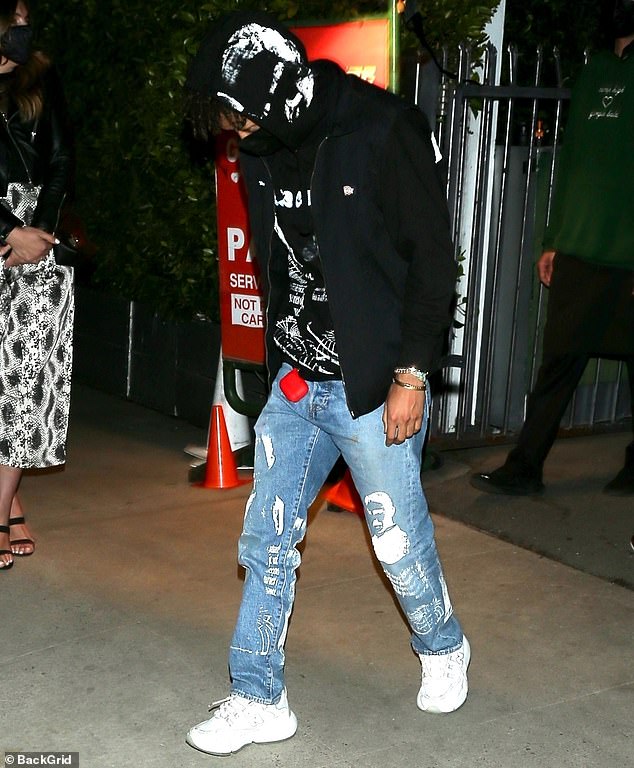 ‘Homies’: He revealed to Seacrest on his iHeartRadio show in September that the pair were longtime ‘homies’ while adding that they ‘loved each other’ as friends

Since breaking things off with 37-year-old Disick in August following a three year romance, Richie has been shooting her shot on the dating scene as she was in a brief tryst with Hard Rock Hotel heir Matthew Morton in the fall and recently Ofer.

A celebrity in her own right, she seems to have developed a taste for wealthy heirs as Ofer is the son of Israeli-born Tanker Pacific founder Idan Ofer, who according to Forbes is the 494th richest man in the world with a net worth of just over $5 Billion.

The two were seen sharing a smooch session in South Beach days ago, but the romance seemed to be a matter of convenience as the Harvard graduate is currently pursuing his MBA at London Business School. 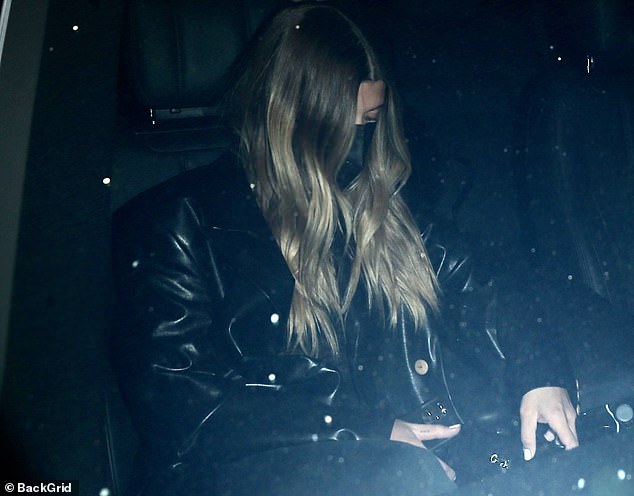 Unattached: Since breaking off her nearly three year romance with Disick over the summer she has been linked to Morton and Ofer, also grabbing dinner Thursday night at Nobu with a mystery man

On Thursday night she proved that she is still largely unattached as she grabbed dinner at hotspot Nobu with a mystery man, climbing into the passenger seat of his black Ferrari shortly thereafter.

A source told E! News on Friday that she is very much ‘single’ and just playing the field.

‘She’s been seeing a few people and is truly having fun right now. She doesn’t want to be tied down in a relationship and is keeping her options open. She’s been going on dates with a few people and her friends have been trying to set her up,’ the insider said.

The source also confirmed that Ofer was a ‘casual’ fling, adding ‘They’ve gone on a few dates and she likes him but she truly doesn’t want anything serious.’ 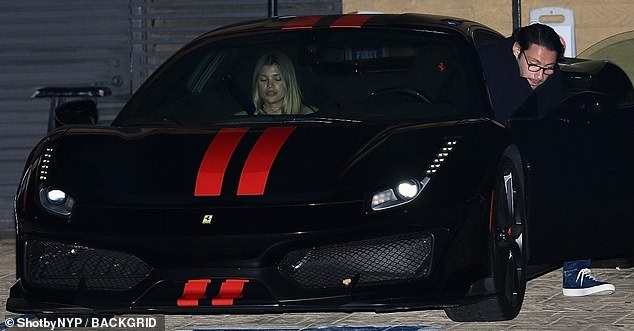 Taste for luxury: Richie grabbed dinner at Nobu on Thursday evening with a mystery man as they left in his black Ferrari afterwards; pictured February 4

Sofia seemed to acknowledge that she had outgrown Disick prior to splitting as she cryptically posted an excerpt from a book that read:

‘Sometimes we outgrow people we used to know and become different people. When this growth happens, some take our changes personally. Not because they have anything against us but because they do not recognize the person that we are now (sic).’

Richie and Disick both stepped out with new people at Kendall Jenner’s controversial Halloween birthday party, as Sofia got cozy with Morton and the Keeping Up With The Kardashians star was spotted arriving with new love interest Amelia Gray Hamlin, 19, who Richie unfollowed on Instagram shortly thereafter.

The new item have been spotted vacationing in Santa Barbara and ringing in the new year in Mexico, and she recently shared a stripped down underwear photo in his Hidden Hills bathroom. 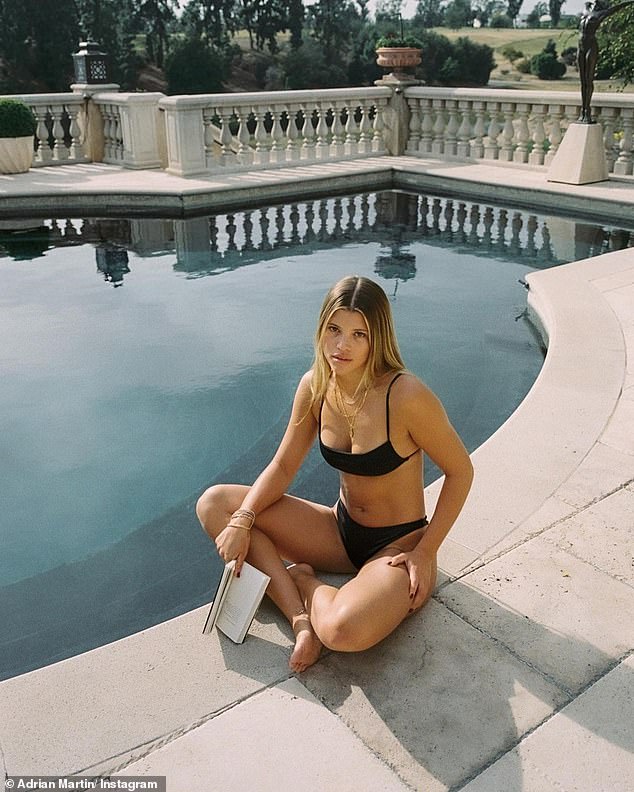 Playing the field: A source told E! News on Friday ‘She doesn’t want to be tied down in a relationship and is keeping her options open’; pictured January 27

Trump says he will probably visit the southern border soon, in exclusive interview with Fox News 0