A 12-year-old girl who was relentlessly abused by a school bully said the moment she was punched repeatedly in the head in an attack that left her concussed ‘sounded like a gunshot’.

Shocking footage shows the Year 7 student at a school in the Blue Mountains being beaten by two girls on Monday afternoon – one of whom she says has been targeting her for three years.

‘I could just hear “bang, bang, bang” and it was hurting and traumatic and it sounded like a gun,’ Sienna-Belle Cross told Daily Mail Australia.

Others later told her they could hear the blows from across the schoolyard in the surprise ambush. 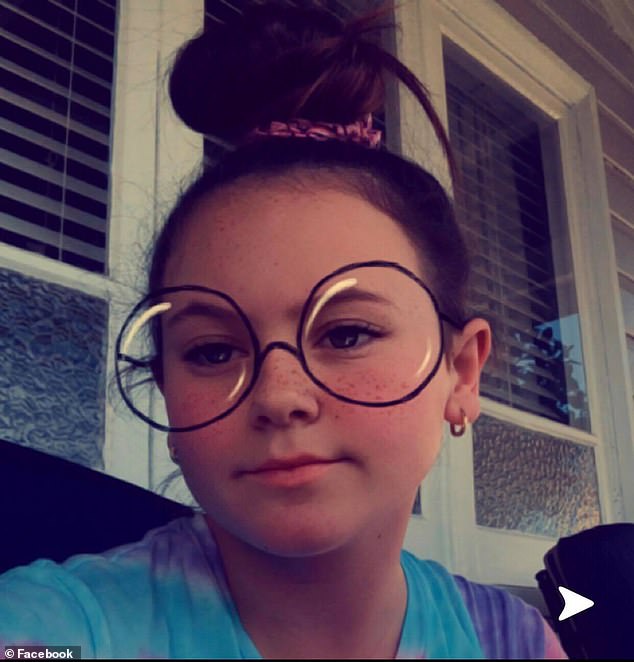 ‘I was coming back from gym class with a couple of my friends and she walked up to me and said “do you still want to fight me?” and she pushed me, she grabbed me and pulled me down,’ Sienna-Belle said.

Her peers watched from the sidelines, either too scared or shocked to intervene.

As the youngster received repeated blows to the head, the attacker’s girlfriend tore the pair apart and teachers intervened.

Sienna-Belle did not have lasting damage, but her mother Rhonda Cross – whose voice was hoarse after spending the day in tears – fears for her daughter’s life.

‘I lost my brother to a one-punch attack,’ the 49-year-old said. ‘It can’t happen to my daughter too.’ 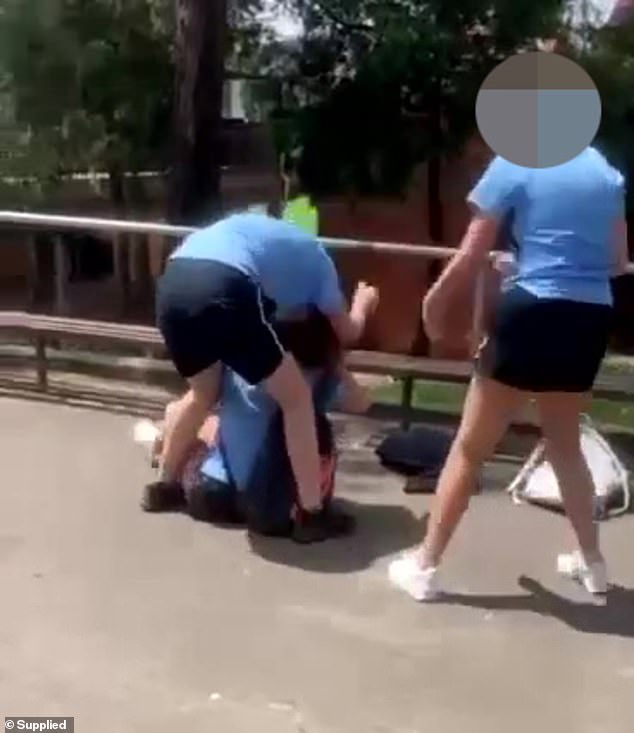 Pictured: Sienna-Bell on the ground while another girl punches her repeatedly in the head 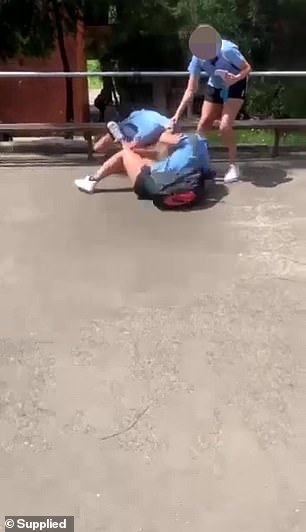 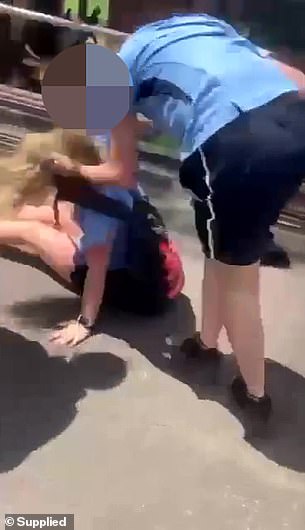 Sienna-Belle (pictured on the ground, left and right) had a concussion after the beating on Monday 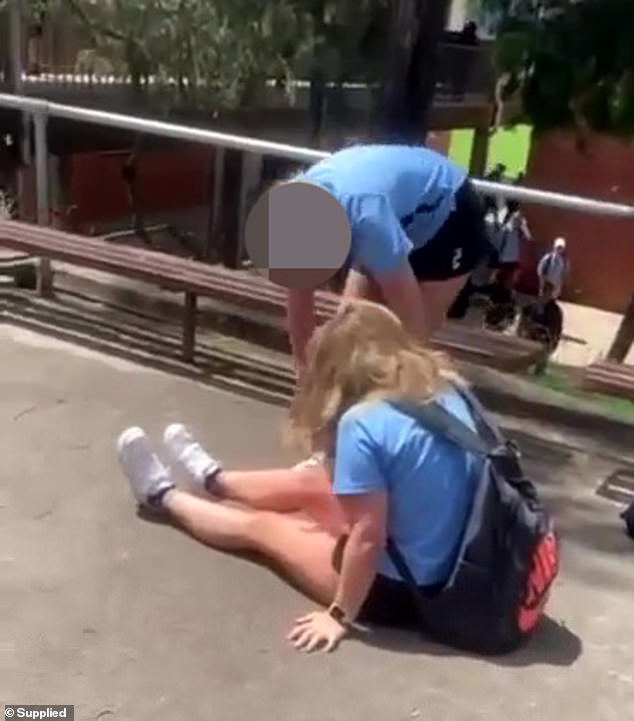 Picutred: Sienna-Belle after the attack. She said the attacks have been happening for three years

The mother-of-two explained her youngest child was a ‘miracle baby’ and she thought she would never be able to have another child after the birth of her oldest daughter Skye 30 years ago.

She struggles to watch the news at night because it reminds her of the abuse ‘her baby’ has dealt with since she was in primary school.

Mrs Cross and her daughter explained that the long-running conflict started when she turned down a date from her attacker.

‘The two girls used to be good friends when they were younger, until the other girl wanted to date Sienna,’ Mrs Cross said.

Sienna-Belle didn’t want a relationship with a girl and, though her ex-friend seemed to accept the situation, she started making a series of ‘narky’ comments. 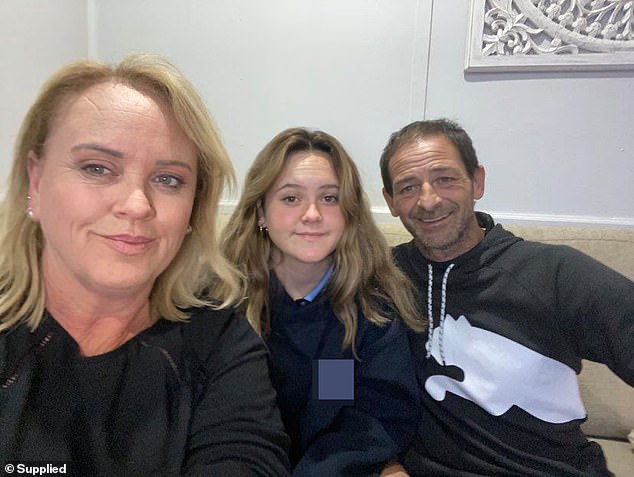 Pictured: Rhonda Cross, 49, with Sienna, 12, and her father Warren, who is a bricklayer 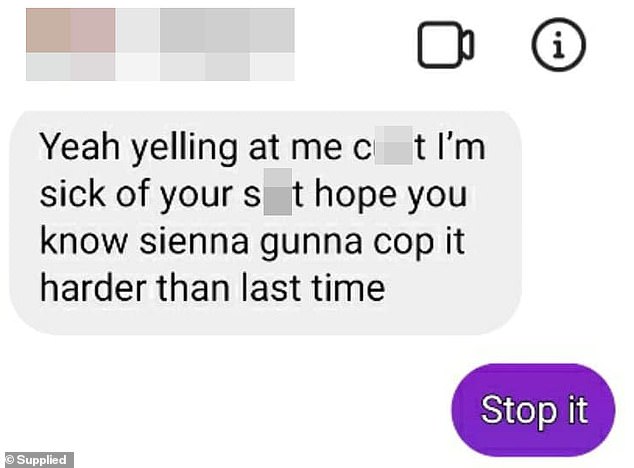 Pictured: An abusive message sent to Rhonda Cross by the girl who is attacking Sienna-Belle

The situation reached boiling point when Sienna-Belle and the girl were having an argument and the girl told her to ‘go off and cry to your mum’.

Without thinking, Sienna-Belle – who was nine years’ old at the time – said ‘at least I’ve got one’.

Mrs Cross said the attacker’s mother left the family a few years ago.

Sienna-Belle said she immediately regretted her words and tried to take them back, but the situation spiralled out of control. 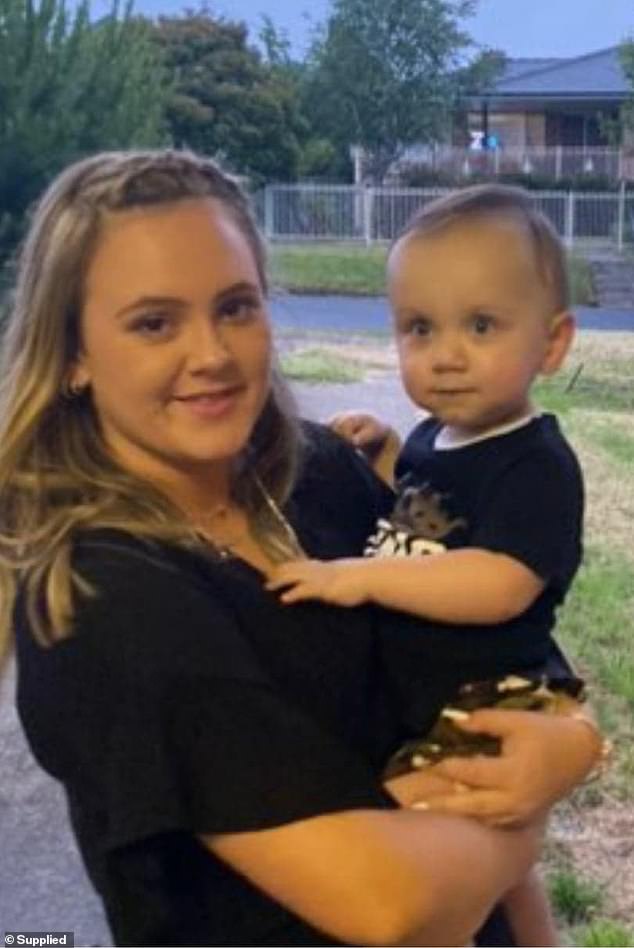 The victim has beaten before, including an incident last year when she tried to choke Sienna-Belle, but the attack on Monday was the worst yet.

While Sienna-Belle has the girl and her friends blocked on social media, she said they still threaten her on Snapchat and through other people.

Mrs Cross received a series of messages from the girl, who threatened to beat her daughter up.

‘I’m sick of your s**t hope you know Sienna gunna cop it harder than last time,’ one message read.

Another read: ‘Don’t be shocked when sienna comes home with no teeth.’

Following the brawl on Monday, the girl was suspended for 20 days, along with her girlfriend and another boy who watched. 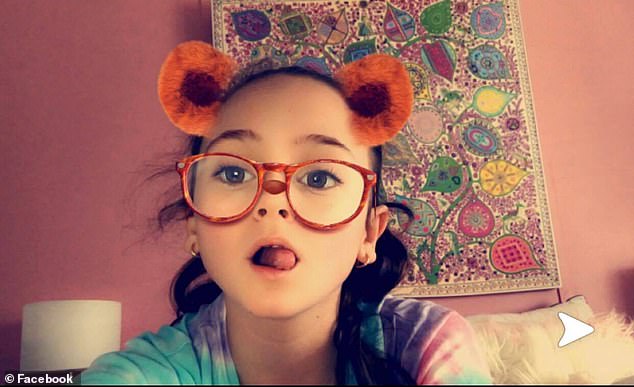 When Sienna-Belle (pictured) was being beaten on Monday, Mrs Cross was on the phone to the principal begging him to check on her daughter

She has been on the phone to the school principal trying to get the situation taken more seriously.

Mrs Cross said all the teachers know the pair can’t be in a room together, but claimed the girl is prepared to miss classes to try and find her daughter.

‘They said she’s safe, but I asked ‘what about between classes?’ and they assured me she would be fine.’

When Sienna-Belle was being beaten on Monday, Mrs Cross was on the phone to the principal begging him to check on her daughter.

The mother also said there is a room called ‘The Hub’ where students can seek refuge if they feel threatened, but the attacker has a card for the room.

Sienna-Belle is now terrified to go to school, and her mother said her brain is scrambled ‘like eggs, from being beaten so much’.

‘How much is this going to scar her now?’ she asked.

‘She’s not the same kid as she was before – she’s become a very quiet kid and it’s hard to get a conversation out of her. 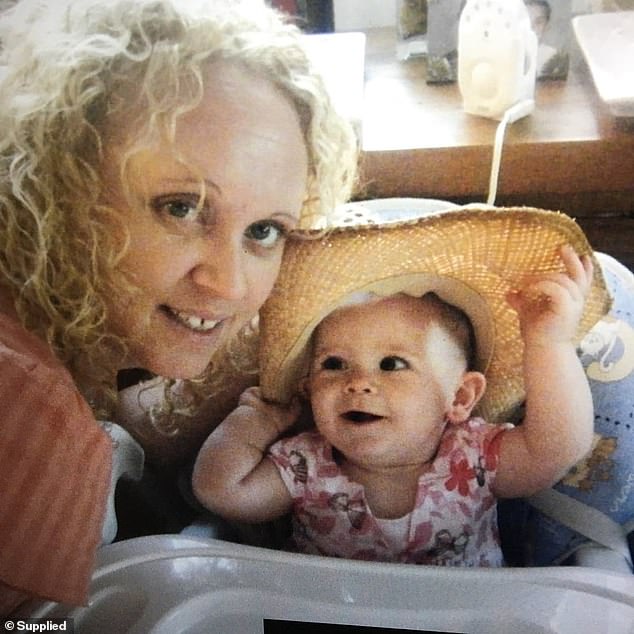 ‘She sleeps in bed with me so I can jeep an eye on her. I work – I wait outside the school.’

When asked why Sienna-Belle didn’t just move schools, Mrs Cross said her daughter has friends at the school who she has known since pre-school.

She fears her daughter, who does not want to move, would spiral into a depression if she was forced to enter a new school environment where she doesn’t know anyone.

An Education Department spokesman told The Daily Telegraph that the school had a zero tolerance approach to violence and bullying.

‘The altercation yesterday was unacceptable and against [the school’s] values,’ he said.

‘A teacher intervened promptly and the school immediately initiated an investigation and disciplinary action continues. The student who was assaulted was fully supported. The school reported the incident to police.’

Local police were called to the school after the attack and are investigating the incident.

‘Police were called to the school grounds after reports of an assault between two female students. The matter remains under investigation.’