‘We’re in America, not East Germany!’ Rudy Giuliani lashes out at his New York talk radio station for airing legal disclaimer distancing itself from his views during his daily call-in show

By Ariel Zilber and Emily Crane For Dailymail.com

Rudy Giuliani blasted the New York radio station that pays him to a daily call-in talk show on Thursday after it aired a lengthy and ‘insulting’ disclaimer before his show saying they did not share his views.

‘The views, assumptions, and opinions expressed by former U.S. attorney, former attorney to the president of the United States, and New York City Mayor Rudy Giuliani, his guests, and callers on his program are strictly their own and do not necessarily represent the opinions, beliefs, or policies of WABC radio, its owner, Red Apple Group, and other WABC hosts or our advertisers,’ the disclaimer said. 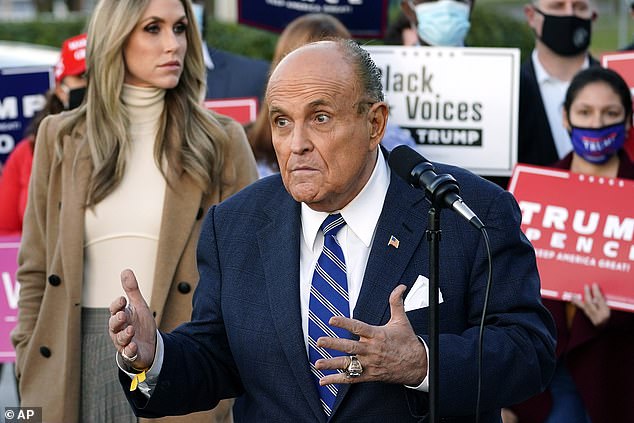 Rudy Giuliani lashed out at his employer, New York’s 77 Talk Radio WABC, after it aired a lengthy and ‘insulting’ disclaimer before his show saying they did not share his views about alleged election fraud. The former New York City mayor is seen above in Philadelphia on November 4

An insulted Giuliani appeared taken aback. After the disclaimer aired, he expressed anger that management did not speak to him about it beforehand.

‘I would have thought they would have told me about that before just doing what they just did,’ the former New York mayor and personal attorney to former President Donald Trump said.

‘[The disclaimer was] rather insulting. And gives you a sense of how far this free speech thing has gone and how they frighten everybody.

‘I mean we’re in America, we’re not in East Germany.’

Giuliani appeared to hint that the disclaimer may force him to quit the station, saying: ‘They’ve got to warn you about me? ‘I’m going to have to give that a lot of consideration.

South braces for severe weather: Tornadoes, hail and flooding rain possible from Texas to the Carolinas 0