NASA/JPL named two sites on Mars after an author and an engineer. Here's why you should know them, too.
Lincoln Project only spoke up when it couldn’t avoid story anymore: author
Why Oprah Winfrey probably didn’t ask Meghan Markle, Prince Harry about Prince Andrew: royal author


Best-selling author Candice Brathwaite has clarified confusion over being ‘replaced’ by Rochelle Humes to present a documentary about the high death rate of black women during pregnancy and childbirth in the UK.

The writer took to Instagram on Saturday to state that she was ‘gutted’ to discover she would no longer be fronting the Channel 4 show, days after she revealed she lost out on a job to lighter-skinned black woman ‘more than once in the last six months’.

Blogger Candice, 32, later shut down rumours that the role was taken from her by the This Morning star, 31, as she insisted she was ‘never in the running’ to host the show as the pair were working on two different programmes.

Lorraine’s style correspondent published her book I Am Not Your Baby Mother in May 2020, years on from when she was rushed to the hospital to drain infected pus which sent her into septic shock after giving birth to her daughter Esmé, now six. 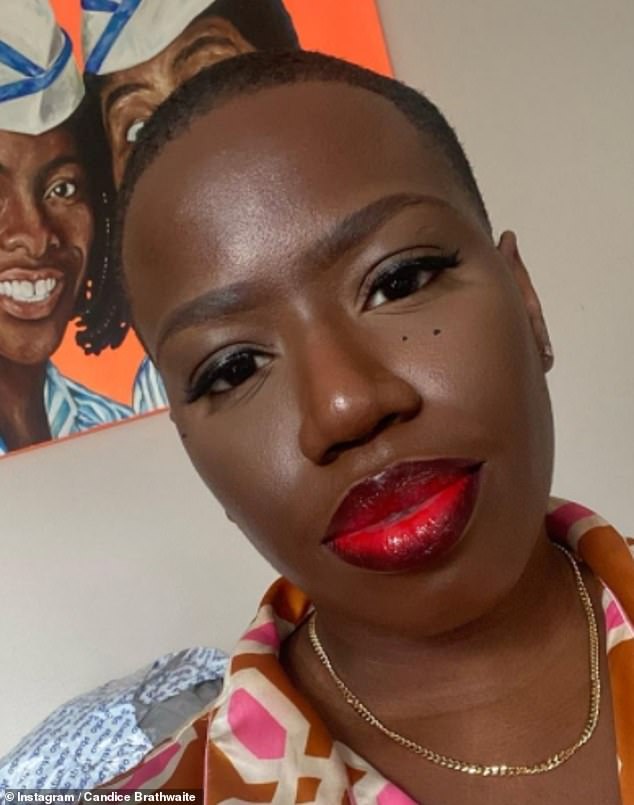 ‘I was never in the running’: Candice Brathwaite has clarified confusion over being ‘replaced’ by Rochelle Humes to present a documentary

Candice – who has campaigned about the tragic issue for years – wrote on Sunday: ‘The producer of the show that Rochelle Humes is to present has called me asking me to clarify that I was never in the running to present that particular documentary.

‘So for the record – I was contacted in March 2020 by a different production company about developing a similar documentary and had been speaking with them throughout 2020 – our last zoom call being on December 1st 2020.

‘I’ve been advised that the show with Rochelle was also being developed at the same time I was engaged in discussions about was obviously commissioned.’

A TV executive also informed the book expert that she wouldn’t be considered to carry the show as they prefer ‘their subjects to be removed from the situation.’ 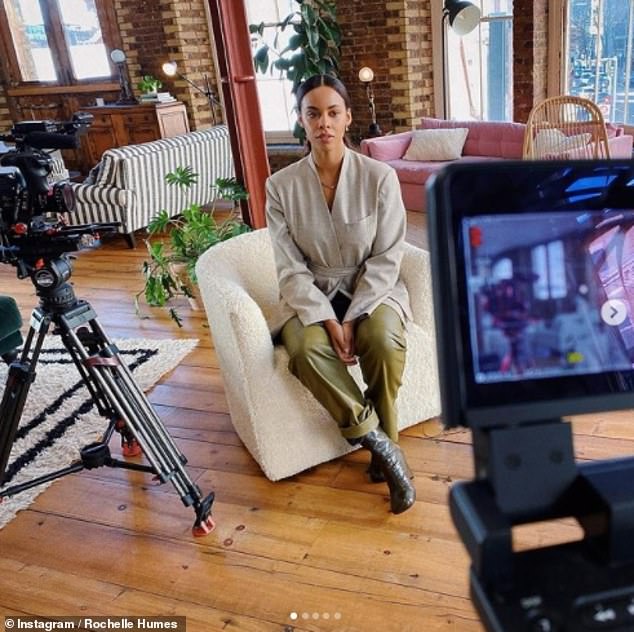 Important issue: On Saturday, the This Morning star, 31, unveiled she was fronting a film about the high death rate of black women during pregnancy and childbirth in the UK 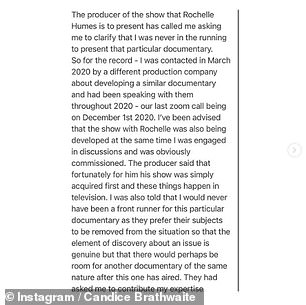 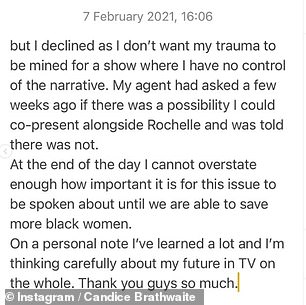 Statement: Blogger Candice, 32, later shut down rumours that the role was taken from her by the This Morning star, 31, as the pair were working on two different programmes

Candice explained how she was offered an opportunity to contribute her knowledge on the topic, but declined after producers rejected her agent’s proposal about co-presenting the film with the former Saturdays singer.

She went on: ‘The producer said that fortunately for him his show was simply acquired first and these things happen in television.

‘I was also told that I would never have been a front runner for this particular documentary as they prefer their subjects to be removed from the situation so that the element of discovery about an issue is genuine but that there would perhaps be room for another documentary of the same nature after this one has aired.

‘They had asked me to contribute my expertise but I declined as I don’t want my trauma to be mined for a show where I have no control of the narrative. 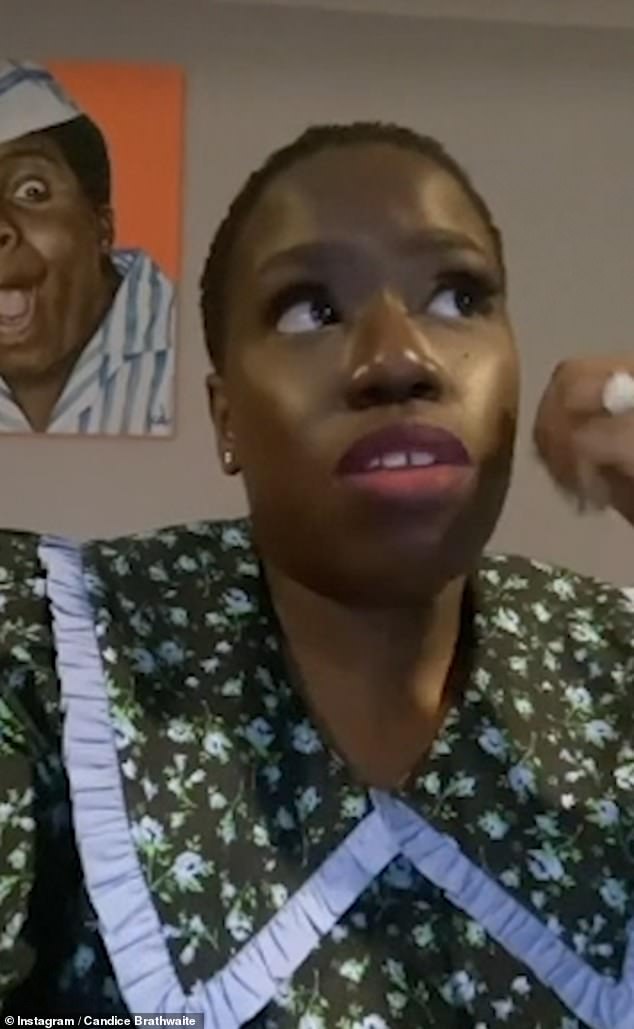 ‘It hit like a ton of bricks’: Earlier in the month, the former marketing assistant revealed she lost out on a job to lighter-skinned black woman ‘more than once in the last six months’

‘My agent had asked a few weeks ago if there was a possibility I could co-present alongside Rochelle and was told there was not.’

Grazia’s contributing editor ended her post by expressing her gratitude towards her fans for their support.

Candice shared: ‘At the end of the day I cannot overstate enough how important it is for this issue to be spoken about until we are able to save more black women.

‘On a personal note I’ve learned a lot and I’m thinking carefully about my future in TV on the whole. Thank you guys so much.’ 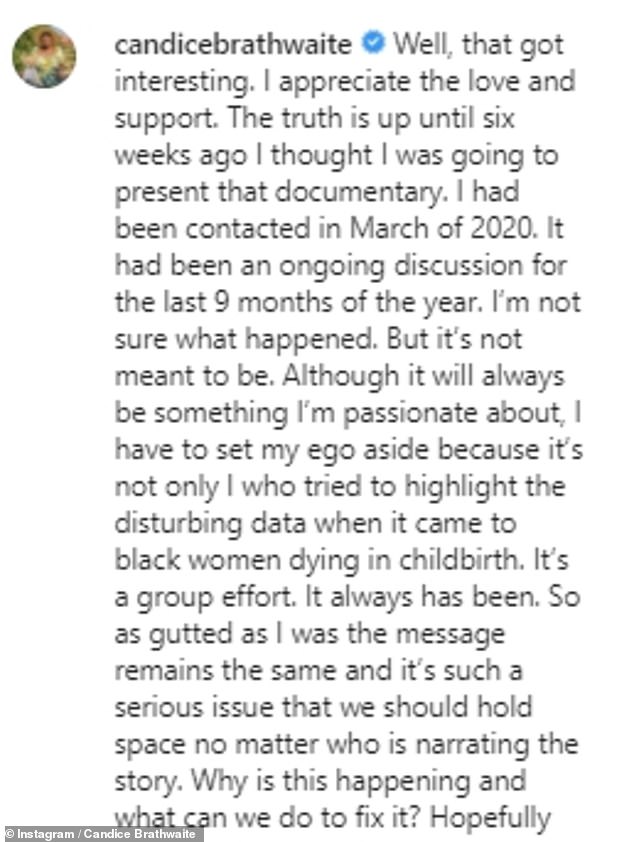 Heart-breaking: In 2014, Candice was rushed to the hospital to drain infected pus which sent her into septic shock after giving birth to her daughter Esmé, now six

Channel 4 said in a statement to the Metro: ‘It is completely untrue that Rochelle Humes replaced Candice Brathwaite on this film. Rochelle was the only presenter attached to the project. Candice was approached to be interviewed but declined.’

The matter set off a conversation about colourism on social media, with many insisting Candice is more deserving of the role due to her work in the black community, while others defended Rochelle’s position.

In her original post, the former marketing assistant said: ‘Well, that got interesting. I appreciate the love and support. The truth is up until six weeks ago I thought I was going to present that documentary. I had been contacted in March of 2020.

‘It had been an ongoing discussion for the last 9 months of the year. I’m not sure what happened. But it’s not meant to be. 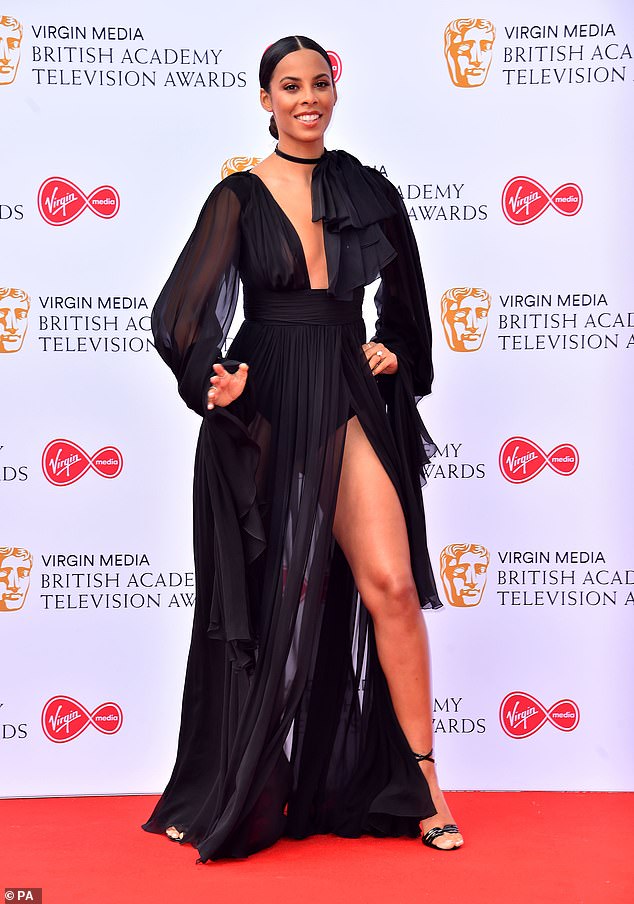 Tragic: The death rate in black women during pregnancy and childbirth is said to have been consistent between 2020 and 2021 (Rochelle pictured in 2019)

‘Although it will always be something I’m passionate about, I have to set my ego aside because it’s not only I who tried to highlight the disturbing data when it came to black women dying in childbirth. It’s a group effort. It always has been.

‘So as gutted as I was the message remains the same and it’s such a serious issue that we should hold space no matter who is narrating the story. Why is this happening and what can we do to fix it?

TV star Rochelle unveiled her Channel 4 documentary on her Instagram platform as she wrote: ‘Hey gang… 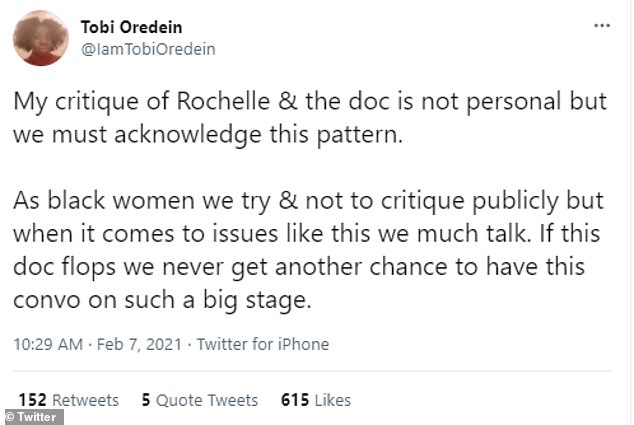 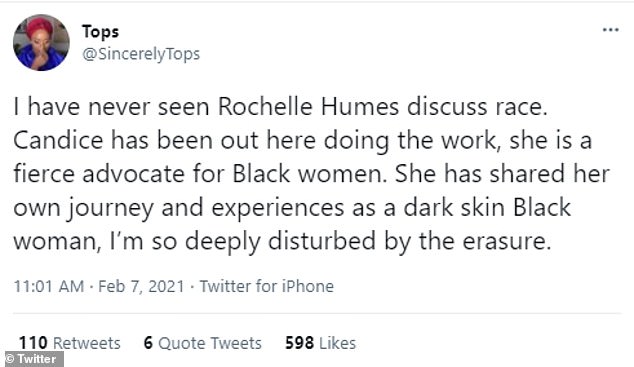 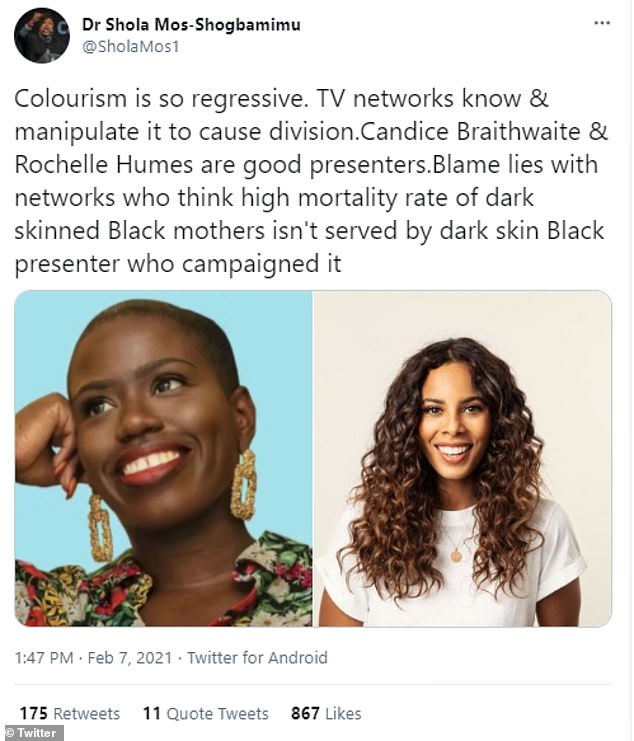 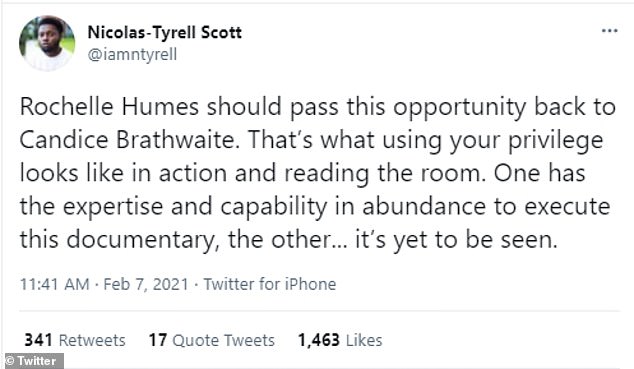 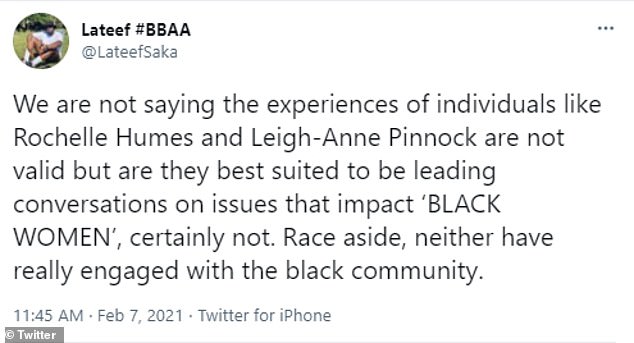 Controversial: The matter set off a conversation about colourism on social media

‘I’m currently making an investigative documentary, looking behind the shocking statistics that in the UK, black women die during pregnancy, childbirth, and shortly after – at a rate of more than four times that of white women.

‘I want to find out why this is, and have met some incredibly brave women as part of my investigation into what’s going on.

‘This is a very difficult and sensitive issue, but I think in order to make a change it’s really important to give a voice to families that have lost loved ones in this nature.

‘I’m hoping in making this film, it leads to tangible changes and solid commitments to bringing these rates down… that’s my goal xx.’ (sic)

Earlier in the month, Candice confessed she was left feeling ‘like I wanted to physically wanted to come out of my skin’ due to being overlooked in the industry.

The media personality said: ‘More than once in the last six months, I have lost out on a job to a lighter skinned black woman. 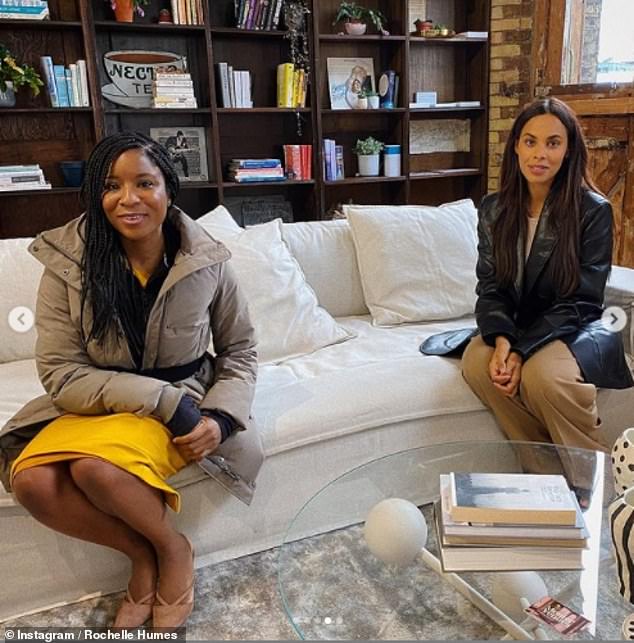 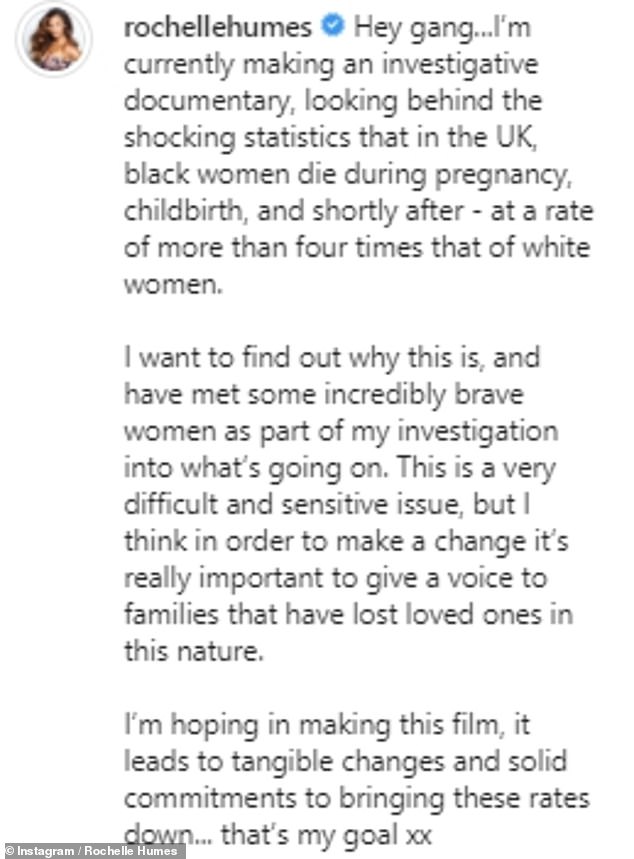 Investigation: The former Saturdays singer declared she hopes to ‘bring these rates down’ with her project (pictured with Dr Christine Ekechi)

The death rate in black women during pregnancy and childbirth is said to have been consistent between 2020 and 2021, according to a report by MBRRACE-UK.

The lead author of the MBRRACE-UK report, Professor Marian Knight, told the Guardian last month: ‘The drop to a fourfold difference should not be a reason to lessen our efforts at a time when addressing these inequalities among pregnant women and new mothers should be a priority.

The rate of deaths among white women has gone up by a tiny amount and the rate of black women has come down a little but neither of these are statistically significant changes because the overall rates are low.’

MailOnline has contacted representatives for Candice and Rochelle for further comment. 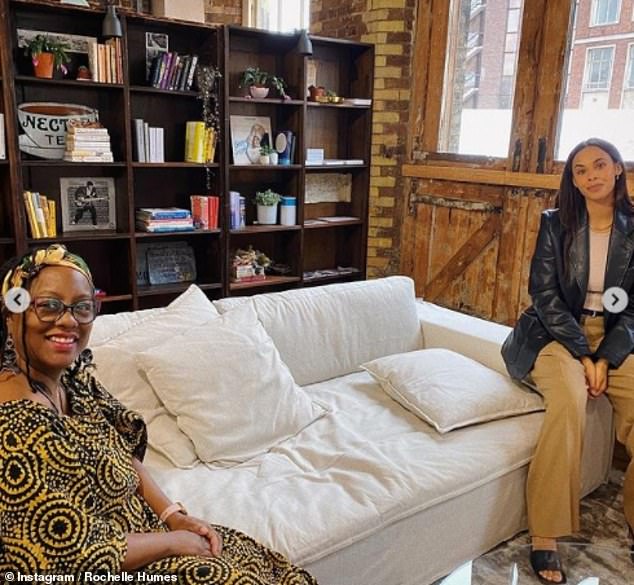 Melissa Caddick's own family Adam Grimley, Edward and Barbara may have been fleeced by missing woman 0

Rep. Jay Obernolte: If Biden's $15 minimum wage happens, for 1.4 million Americans the real wage will be $0 0