A collection of 5,000-year-old cave paintings depicting various figures and symbols has been discovered in Spain.The drawings were discovered in th


A collection of 5,000-year-old cave paintings depicting various figures and symbols has been discovered in Spain.

The drawings were discovered in the rocky area of ​​San Juan, near the town of Albuquerque in the province of Badajoz in western Spain.

They are around 4 inches in length and include some anthropomorphic figures, as well as an arrow and other symbols, according to Spanish daily newspaper La Vanguardia.

The doodlings were discovered by Agustín Palomo, an historic researcher who lives locally to the caves, while he was looking for a type of tomb known as a Dolmen. 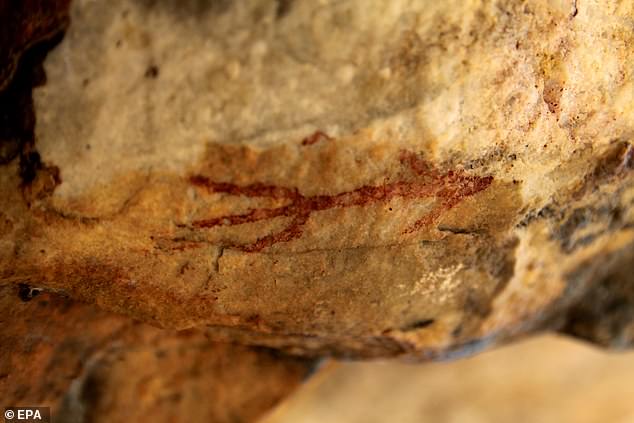 A view of a 5,000 year-old cave painting discovered by Spanish expert and researcher Agustin Palomo in Alburquerque, Extremadura, Spain

Mr Palomo immediately recognised their significance, given their location not far from two other well-known sets of cave drawings – ‘Risco de San Blas’, of the Sierra de la Carava and those of Azagala – the latter of which were only discovered around 20 years ago.

It has taken a year to analyse the drawings, with Palomo, who specialises in the period, undertaking responsibility for studying one of the drawings he discovered himself.

The findings will be published in the latest issue of the Journal of Extremeño Studies on Sunday, December 1.

A jagged and rocky surface of the cave wall could be the reason the paintings have remained hidden for so long.

Various other cave art discoveries have been made in the Extremadura region of western Spain – notably in the caves of Maltravieso, where 71 handprint stencils were found in the 1990s.

The Maltravieso caves were discovered in 1951 and shows traces of human occupation from the Middle Paleolithic period (300,000 to 30,000 years-ago). 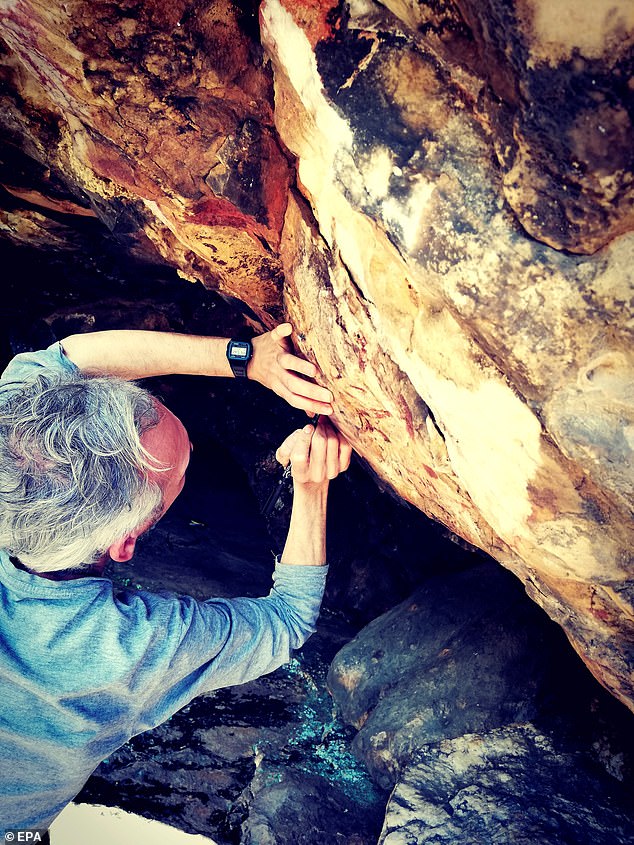 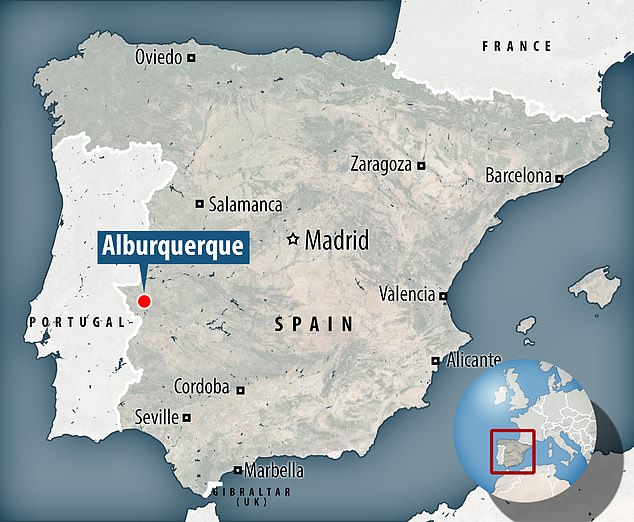 The drawings were discovered in the rocky area of ​​San Juan, near the town of Albuquerque in the province of Badajoz in western Spain

Just last year, three different examples of artwork were found deep inside separate caverns in Spain some 434 miles apart: La Pasiega in the north, Maltravieso in central Spain, and Ardales in the south.

Cave art in La Pasiega dates back more than 64,000 years, and was made by Neanderthals – making it much older than the art work found by Mr Palomo.

The period around 5,000 years ago was when writing born, just after the invention of the wheel and the beginning of historiography.

Researchers from Massachusetts Institute of Technology last year did a study suggesting that cave drawings from the period of and prior to the invention of language prove that the fundamental parts of speech were derived from artwork.

This intersection of drawing and sound is called ‘cross-modality information transfer’, which is the convergence of visual art and auditory information.

Maltravieso Cave showing three hand stencils (circled). One has been dated to at least 66,000 years ago and must have been made by a Neanderthal. The enhanced colour of the photo shows the outline of the hands. The research team believe that the stencils indicate a distinct attempt at art 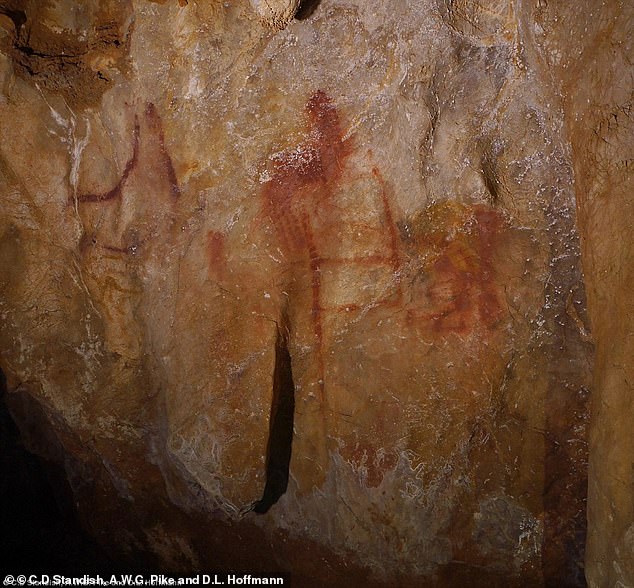 Cave art in La Pasiega (pictured) dates to older than 64,000 years and was made by Neanderthals

The report’s authors said this intersection ‘allowed early humans to enhance their ability to convey symbolic thinking’, the report said.

One of the authors of the Massachusetts study, a linguist from MIT named Shigeru Miyagawa, commented: ‘Cave art was part of the package deal in terms of how homo sapiens came to have this very high-level cognitive processing.

‘You have this very concrete cognitive process that converts an acoustic signal into some mental representation and externalizes it as a visual.’ 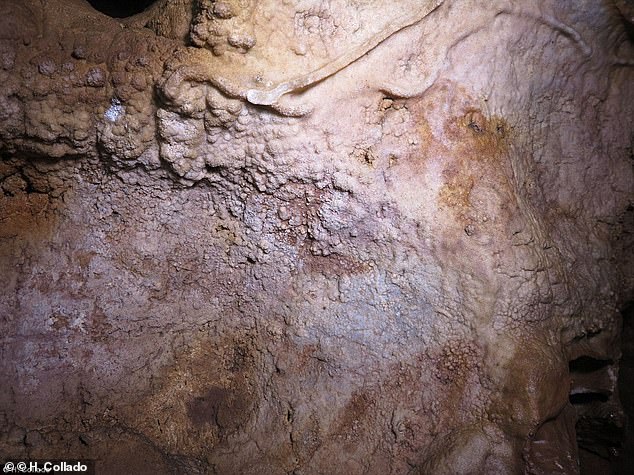 The study suggests Neanderthals invented art 20,000 years before modern humans thought of daubing pictures of prehistoric bison on cave walls. This cave wall in Maltravieso with Neanderthal hand stencils is almost completely covered with calcite. It is more than 66,000 years old which pre-dates the existence of humans in the European region

His theory implies that the creation of cave art was not necessarily a leisure activity. Rather, it had a conventional purpose, allowing humans to communicate clearly.

Miyagawa said: ‘I think it’s very clear that these artists were talking to one another. It’s a communal effort.’

However, scientists are still somewhat in the dark about the origins of human speech. 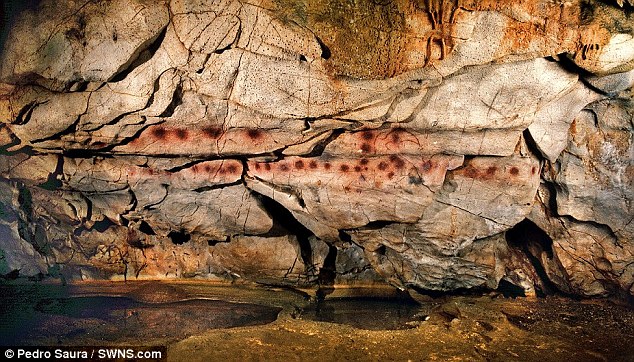 Record-breaker: The ‘Panel of Hands’ artwork in the El Castillo cave in northern Spain. Made by blowing or spitting paint onto the wall, scientists have estimated the art to be at least 40,800 years old

This means the cave paintings were created by either the first anatomically modern humans in the area – first thought to exist 41,500 years ago – or by Neanderthals.

Scientists examined a total of 11 caves in northern Spain, including the UNESCO World Heritage sites of Altamira, El Castillo and Tito Bustillo.

Hand stencils and disks made by blowing paint onto the wall in the El Castillo cave proved to date back to at least 40,800 years. This makes them the oldest known cave art in Europe – up to 10,000 years older than previous examples from France.

A large club-shaped symbol in the polychrome chamber at Altamira was found to be at least 35,600 years old, showing that painting started there 10,000 years earlier than previously thought too.

The creation of art is considered important to the evolution of modern cognitions and symbolic behaviour, and could be associated with the development of language.

Dr Alistair Pike, of the University of Bristol, said: ‘We see evidence for earlier human symbolism in the form of perforated beads, engraved egg shells and pigments in Africa 70,000 to 100,000 years ago, but it appears that the earliest cave paintings are in Europe.

‘One argument for its development here is that competition for resources with Neanderthals provoked increased cultural innovation from the earliest groups of modern humans in order to survive.’