Pregnant Lauren Goodger, 34, wraps up warm in a longline coat for a walk with beau Charles Drury, 23

Pregnant Lauren Goodger, 34, wraps up warm in a longline coat for a romantic walk with her boyfriend Charles Drury, 23, in the snowBy


Pregnant Lauren Goodger, 34, wraps up warm in a longline coat for a romantic walk with her boyfriend Charles Drury, 23, in the snow

She is expecting her first child with her partner Charles Drury in July.

And Pregnant Lauren Goodger enjoyed a romantic stroll with her beau, 23, in the British countryside on Monday.

The former TOWIE, 34, bundled up in a black coat and Louis Vuitton scarf as she posed for a series of snaps with Charles on their walk amid Storm Darcy. 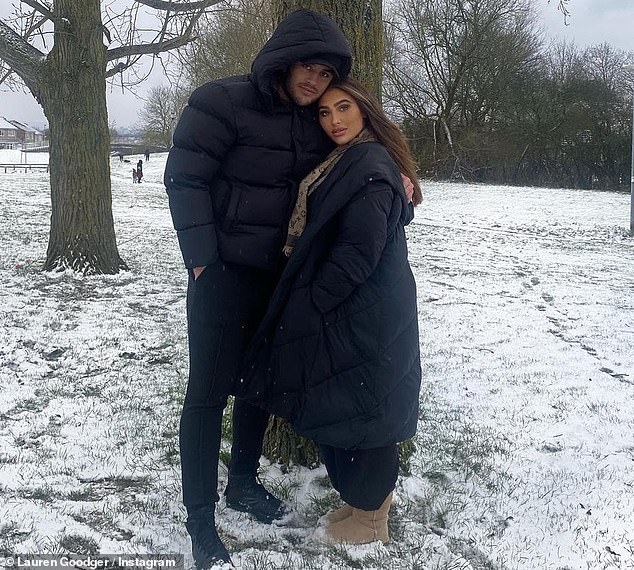 Smitten: Pregnant Lauren Goodger bundled up in a black coat and Louis Vuitton scarf as she enjoyed a romantic stroll with her beau, Charles Drury, in the British countryside on Monday

She rocked cream sheepskin boots and full coverage make-up as her caramel tresses cascaded down in a straight hairdo.

He wrapped his arm around Lauren and shared a tender kiss during their loved-up outing.

Storm Darcy brought chaos to Britain on Monday, with up to a foot of snowfall and 50mph winds causing crashes, rail cancellations and vaccination centre closures amid ‘Beast from the East II’. 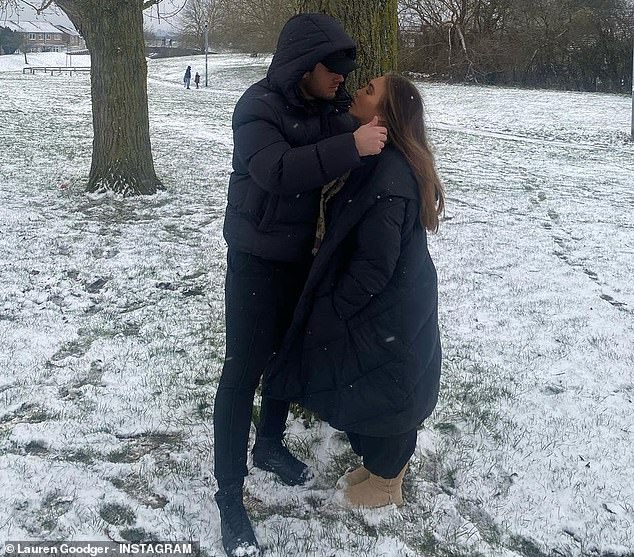 Glamorous display: The former TOWIE, 34, rocked cream sheepskin boots and full coverage make-up as her caramel tresses cascaded down in a straight hairdo

Most of England and Scotland is now covered in snow, with temperatures plunging as low as -7C in Scotland as a ‘bitterly cold’ weather system swept in from Ukraine and the Black Sea.

Lauren confirmed she is expecting her first child with Charles on January 18, three months after announcing their relationship.

She admitted her new boyfriend was initially skeptical after she told him her pregnancy test had returned a positive result.

Lauren said of her happy news: ‘It’s exciting and we’re really happy. It’s difficult, but we’ve just got through it.’ 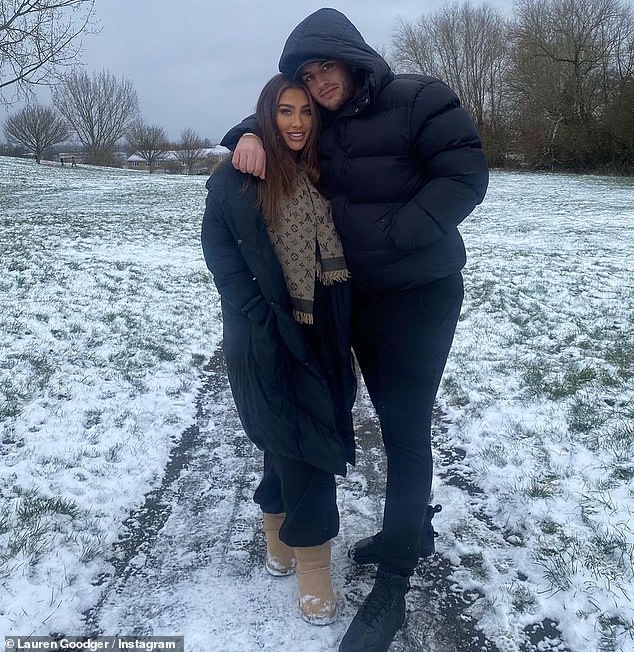 Sweet: Meanwhile her boyfriend, 23, sported a hooded padded jacket and skinny jeans as he wrapped his arm around Lauren and shared a tender kiss during their loved-up outing

Recalling the moment she discovered she was pregnant, Lauren explained: ‘I was in bed not well with a cold and I was meant to come on that day and I’m always quite regular.

‘We went and bought a test from a bargain shop and I did it – I couldn’t believe it! I rang him and he was like: “You’re lying, you’re joking.” He didn’t believe the test! I did a digital one as well and he walked around with it in his bag for about three days.’

The happy news comes after Lauren moved Charles, who previously dated Katie Price, 42, into her Essex home in late October within weeks of meeting him.

A source told The Sun: ‘Charles has moved into her Essex home and they’re really loved up. She’s head over heels for him – friends can’t believe how fast she’s fallen for him. Everyone’s hoping she’s finally found The One.’

Lauren also recently admitted she would be up for doing a Mummy Diaries-style reality show in the future to document her journey through to motherhood.

When one fan asked her on Instagram: ‘Would you do a first time mum show like Sam/Billie and Ferne – Yours would be great x’, she replied with a nodding GIF, suggesting that this would definitely be something she would consider.

Lauren was quizzed by one fan on how her bump is ‘so big already’.

The media star shared a picture of herself out and about, and replied: ‘I do have a bump I did straight away it’s hormones but it’s not as big as some pics.’ 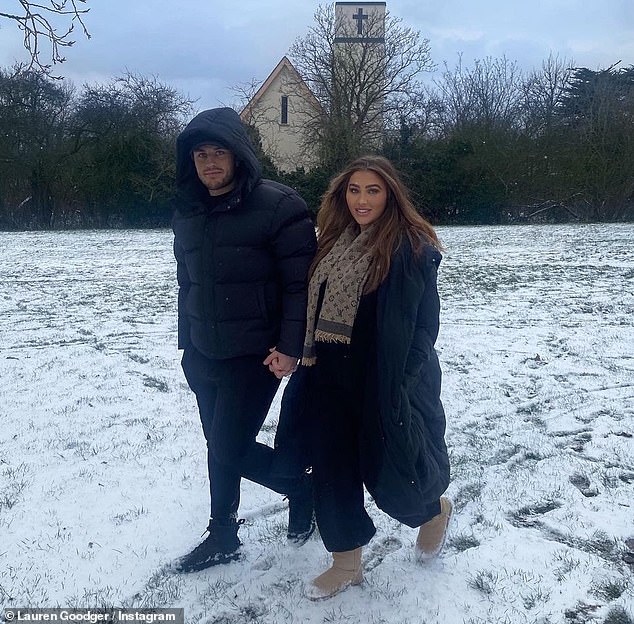 Baby on the way! Lauren confirmed she is expecting her first child with Charles on January 18, three months after announcing their relationship

Loading...
Newer Post
Young motorcyclist, 22, who was killed in a car chase has had her Currajong home robbed
Older Post
Kraisercraft slapband watches recalled because they can kill

How to properly dispose expired medication 0