Ferguson activists, Michael Brown's father demand $20M from BLM
30 years after Rodney King, Derek Chauvin trial is 'like reliving history' for lawmakers, lawyers, activists and others who were there
Migrant children pushed through immigration court alone as activists scramble to provide legal help


A police union leader has slammed Brooklyn Center’s mayor for ‘letting political activists run the show’ in the aftermath of the fatal shooting of black man Daunte Wright by a white female cop during a traffic stop in the city.

Brian Peters, the head of the Minnesota Police and Peace Officers Association, told WCCO-AM radio: ‘If I were the mayor, I would not allow the political activists [to] run the show.’

Peters claims Mike Elliott – mayor since January 2019 – is in ‘way over his head’.

Under pressure to swiftly fire the officer involved, Elliott and the city council voted to fire the city manager, and give control of the police department to the mayor.

He added: ‘The decisions that this mayor is making is completely just nothing like I’ve ever seen.’

His comments came a day after Elliott and new police chief Tony Gruenig were berated at a press conference by a Black Lives Matter activist, who slammed the police force and said: ‘You can take the trash out but it recycles itself. It comes right back!’

The unidentified woman turned to Elliott and said: ‘Get rid of the trash, mayor!’ 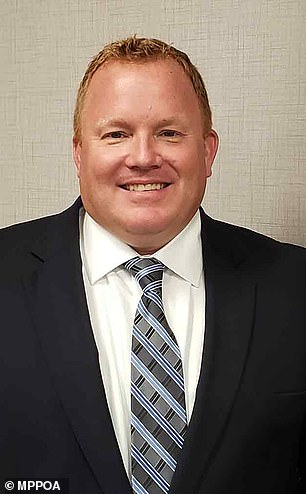 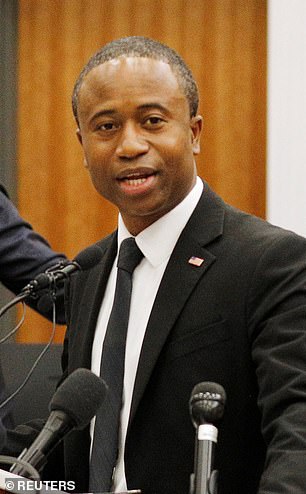 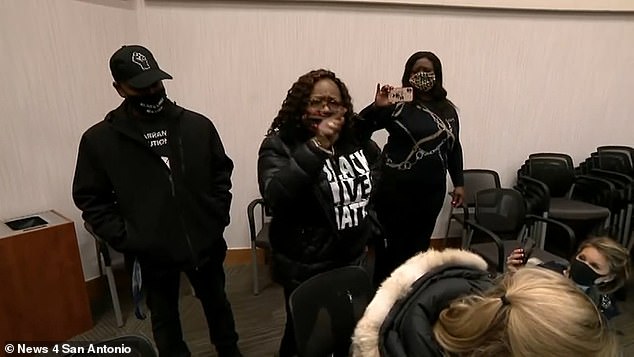 Peters also suggested that victim Daunte Wright ‘should have complied’ during the arrest which lead to his death Sunday, adding: ‘This is going to be an unpopular statement.

‘Daunte Wright, if he would have just complied – he was told he was under arrest, they were arresting him on a warrant for weapons – he set off a chain of events that unfortunately led to his death.

‘I’m not excusing it. But we’re seeing in policing these days is that non-compliance by the public.’

Former cop Kim Potter, 48, was on Wednesday charged with second-degree manslaughter – which carries a maximum penalty of 10 years in prison – for killing 20-year-old Wright.

She posted $100,000 bond Wednesday evening and was released from the Hennepin County jail, online records showed.

Mayor Mike Elliott, 37, a black man who had emigrated from Liberia as a child, has said: ‘It´s been very difficult for myself, for the community, to deal with the pain and the agony that comes from watching a young man be killed before our eyes.’

Since the Sunday shooting, the mayor has become the face of this community’s struggle, which comes as a former Minneapolis police officer is on trial in the Floyd case. 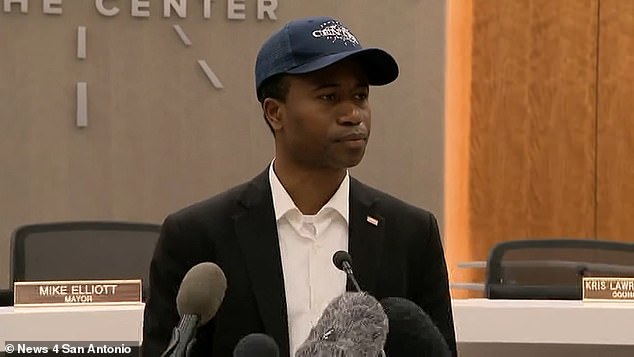 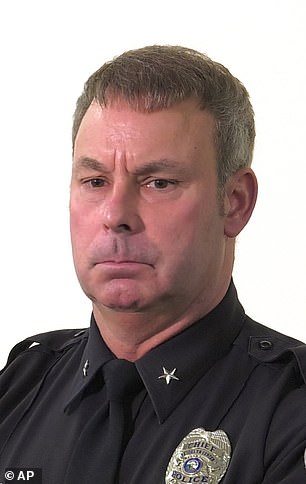 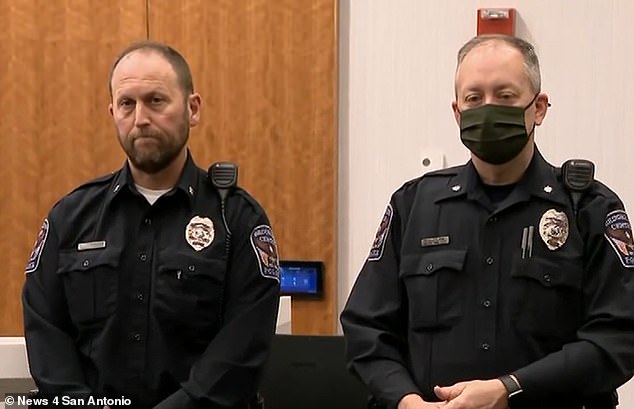 Elliott announced that he was elevating Commander Tony Gruenig (left) to the position of acting police chief. Garrett Flesland (right), the department’s commander of its investigations division, will assist Gruenig, Elliott said

Elliott has promised transparency and vowed accountability for Wright’s death.

On Tuesday, Elliott held a news conference announcing that he was promoting Commander Tony Gruenig, a 19-year veteran of the force, to the position of acting police chief.

Elliott praised Gruenig as ‘someone who has spent a lot of time working with the community’ and who ‘knows Brooklyn Center well.’

Gruenig then gave a short statement to the assembled media and several community activists, including a few who were wearing Black Lives Matter shirts.

‘We were informed less than an hour ago [promotion], we’re just trying to wrap our heads around the situation.

‘We’d like some calm for the community as we try to wrap our heads around the entire situation.’

The shooting of Wright by a white police officer has set off four days of protests in Brooklyn Center. 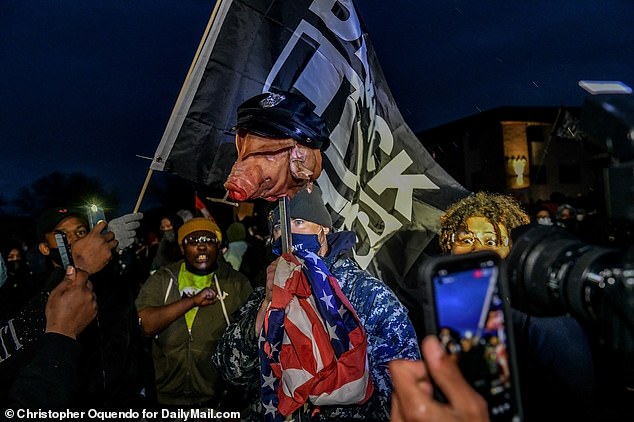 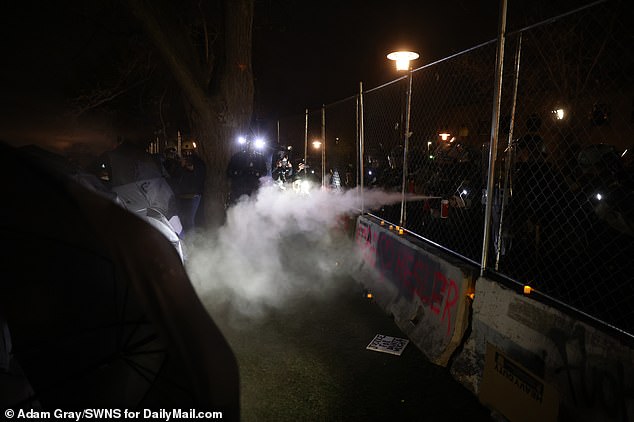 Shortly after 9 p.m., police announced over a loudspeaker that the protest was an unlawful assembly 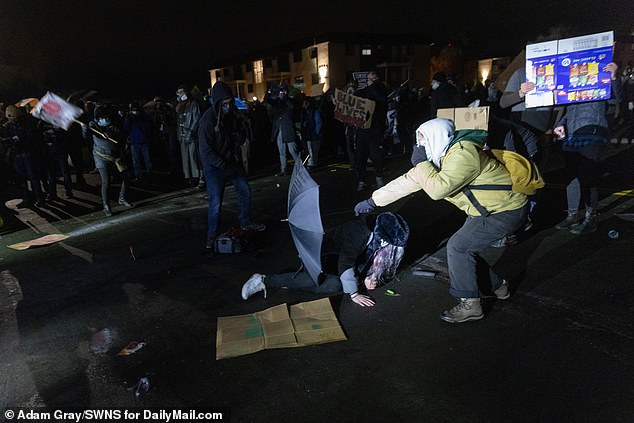 A protester is pictured on the floor during clashed with police Wednesday. A second demonstrator appears to be protecting her with an umbrella shield

On Tuesday, Potter and the police chief resigned. Elliot made clear the city already had been moving toward firing Potter. He said he hoped her departure would ‘bring some calm to the community.’

But the mayor also has acknowledged systemic sources of the distrust between residents and police in his city.

Of the roughly 50 sworn officers on the city´s force, ‘very few’ are people of color and none live in Brooklyn Center, he said, acknowledging he saw the latter as a clear problem.

‘There is a huge importance to having a significant number of your officers living in the community where they serve,’ he said. 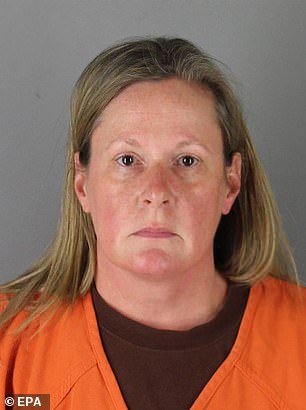 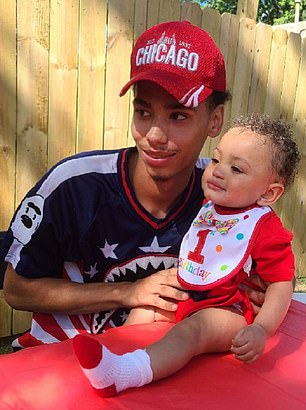 Kimberly Potter, 48, left, was released from the Hennepin County jail at 5.38pm after posting a $100,000 bond after she was charged for the shooting death of Daunte Wright, right

The former Brooklyn Center police chief has said that Potter, a 26-year veteran and training officer, intended to use her Taser on Wright but fired her handgun instead.

Potter shouted ‘Taser, Taser, Taser,’ as she pulled the trigger on her handgun at 2:02:01, firing one round into the left side of the victim, the complaint states.

Wright immediately said ‘ah, he shot me,’ and drove away in his car before crashing and coming to a stop.

Meanwhile, Potter said ‘S**t, I just shot him!’ after firing her gun. 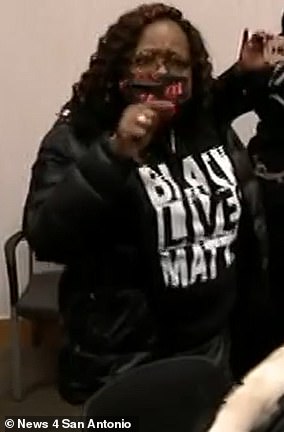 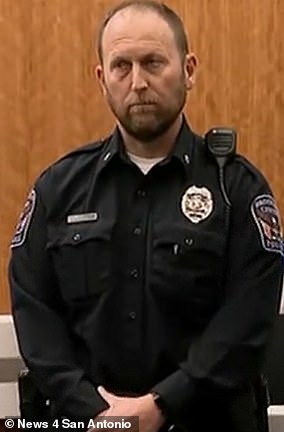 During a news conference on Tuesday, Brooklyn Center Mayor Mike Elliott announced the elevation of acting police chief Tony Gruenig, a 19-year veteran of the force.

‘We were informed less than an hour ago [promotion], we’re just trying to wrap our heads around the situation.

‘We’d like some calm for the community as we try to wrap our heads around the entire situation.’

But the news conference grew tense as a woman standing toward the back of the room berated the newly appointed police chief.

The woman, wearing a Black Lives Matter shirt, blasted the chief for ‘not being able to wrap his head around…what went on with Daunte Wright.’

She demanded that Gruenig show ‘empathy, sympathy, and compassion.’

‘You need to look yourself in the mirror and speak to your own core of your heart,’ the woman told Gruenig.

‘If it was your kid, how would you feel? What would you do?’

The woman continued: ‘You all keep traumatizing us over and over again. And you can’t wrap your brain around it? But yet you go home to your kids and wife every day.’ 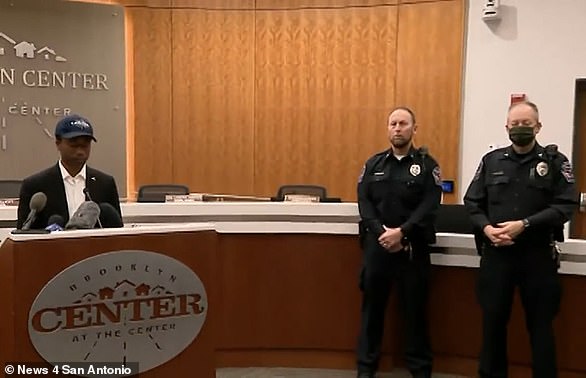 Elliott (far left) praised Gruenig (center) as ‘someone who has spent a lot of time working with the community’ and who ‘knows Brooklyn Center well.’ Gruenig will be assisted in his new role by Commander Garrett Flesland (far right) 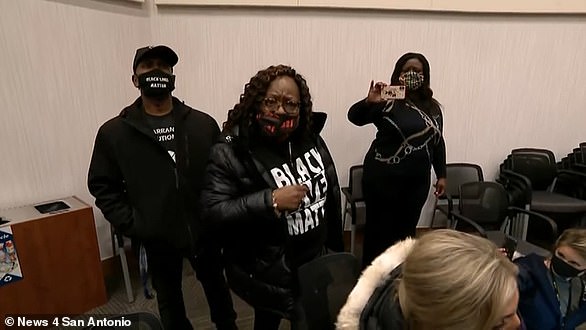 She criticized the commander for ‘not being able to wrap his head around…what went on with Daunte Wright’ and called for him to have ‘empathy, sympathy, and compassion’

The woman continued: ‘I’m going to need you to do more than just wrap your mind around it because it’s corrupt cops here in Brooklyn Center and Minnesota [that endanger] black and brown and indigenous people.’

‘You go home and you wrap your arms around your kids every day!’

The woman went on to mention the names of African Americans who died in police custody.

‘You don’t know what it feels like! I’m sick of you all!’ the woman says.

‘You can take the trash out but it recycles itself. It comes right back!’

She then turned to Elliott and said: ‘Get rid of the trash, mayor!’

Looking to get a tattoo? You're not alone. Artists say they're seeing increased demand, despite the pandemic.

Looking to get a tattoo? You're not alone. Artists say they're seeing increased demand, despite the pandemic. 0