Police hunt masked stranger who tried to snatch two-year-old girl from her pram after chatting to mother, 25Mother, 25, approached by


Police hunt masked stranger who tried to snatch two-year-old girl from her pram after chatting to mother, 25

By Lydia Catling For Mailonline

A stranger wearing a white mask attempted to abduct a toddler from her pushchair, sparking a man hunt.

A 25-year-old mother was walking with her two-year-old daughter in a pram when they were approached by a man they didn’t know in Eastrop Park, Basingstoke, Hampshire.

He began chatting with the mother before trying to take the young child out of the chair on Thursday afternoon. 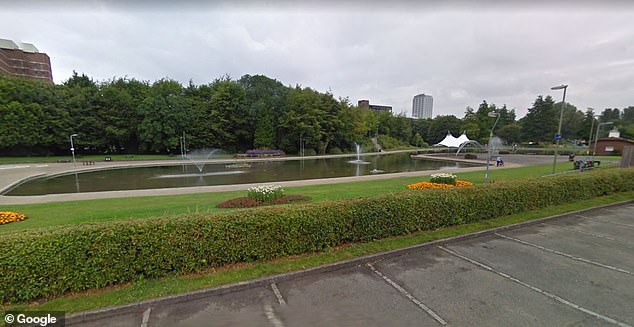 A mother, 25, was walking in Eastrop Park, Basingstoke, Hants (pictured), when a man approached them and tried to take her two-year-old out of her pushchair

Sharing a post on Facebook about the ‘traumatic events’ which took place, she said the park was her daughter’s ‘favourite place.

The mother said the man touched her child’s face before wrapping his arms around her and attempting to pull her out.

She claims he then tried to push the mother out of the way to take the pram.

The man has been described as being around 5ft 6ins, black and in his 40s. He is also said to be stocky with black hair and beard and moustache. 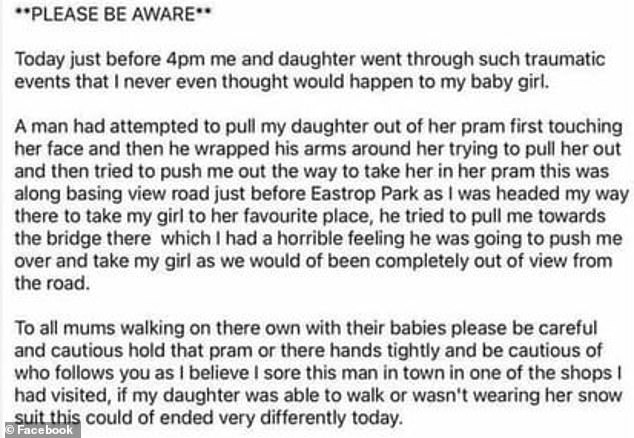 He was described as wearing a white mask, a royal blue puffa jacket, grey jeans and white trainers.

The mother issued a warning to other mothers: ‘To all mums walking on their own with their babies please be careful and cautious.

‘Hold that pram or their hands tightly and be cautious of who follows you as I believe I saw this man in town in one of the shops I had visited.

‘If my daughter was able to walk or wasn’t wearing her snow suit this could of ended very differently today.’

Officers are appealing for anyone with information to come forward.

A Hampshire Police spokesman said: ‘Were you in the area at the time, perhaps you saw or heard something? Do you recognise the man in this description?’

Loading...
Newer Post
Frankie Essex shows off her hourglass curves in a strapless monochrome swimsuit in Mexico
Older Post
Biden should insist that the 'lawmakers' make the law

'High-level chess': How Biden is navigating his relationship with Mexico's President 'AMLO'

Tom Del Beccaro: California's Gavin Newsom recall — why the country needs to get behind it 0