Parents have been left fuming at headteachers who told their children to play in the snow instead of taking online lessons on Zoom.As large parts o


Parents have been left fuming at headteachers who told their children to play in the snow instead of taking online lessons on Zoom.

As large parts of the UK were hit with snow from Storm Darcy, some headteachers took it upon themselves to call a ‘snow day’ for home school students, scrapping online lessons and telling children to go out sledding instead.

One headteacher boastfully said she ‘didn’t care’ about the reaction from already under pressure working parents, who are struggling to deal with home-schooling as it is.

Another even suggested working parents who had complained about the move were ‘ungrateful’.

Meanwhile the Department of Education today refused to criticise teachers over the move, saying it was down to headteachers to make ‘sensible’ decisions over online learning.

But parents were left fuming, with one asking ‘can teachers stoop any lower?’

The row comes as today council bosses begged for more students to be home-schooled because classes for key worker children – who are still going in for face-to-face lessons – are currently ‘over-capacity’. 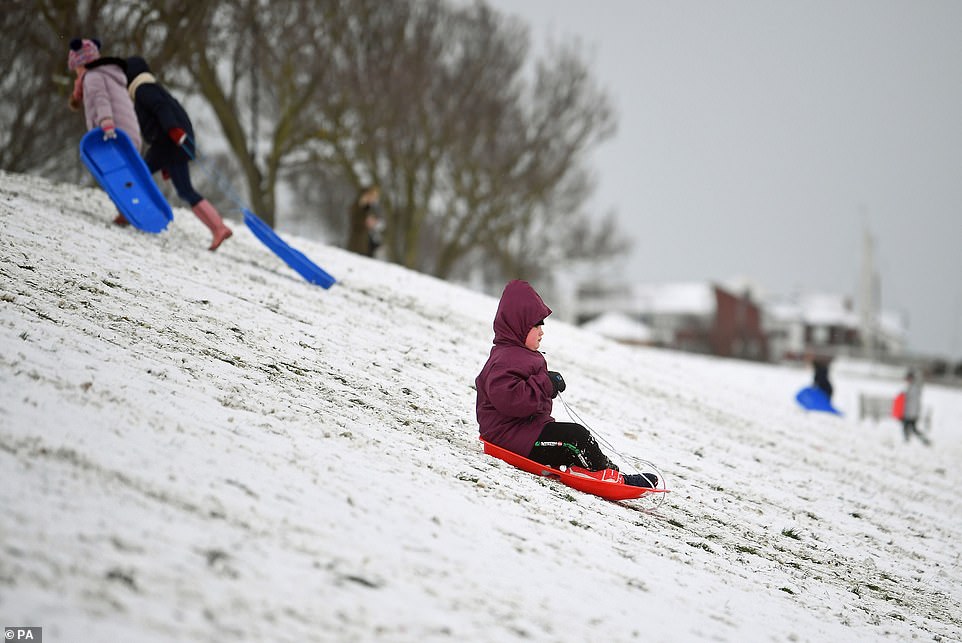 As large parts of the UK were hit with snow from Storm Darcy, some headteachers took it upon themselves to call a ‘snow day’ for home school students, scrapping online lessons and telling children to go out sledding instead (pictured: A child enjoys the snow at Thorpe Bay, Essex today)

One headteacher to call a ‘snow day’ for her online students was Principal Clare Greene from Eastcote Primary Academy, in Bexley, London.

Writing on Twitter, she said: ‘Looking forward to a snow day. Online learning tasks include making a snowman and having a snowball fight.’

Responding to a tweet about another ‘snow day’ school closure, she said: ‘The remote learning tasks will be: make a snowman, go sledging, have a snowball fight and show me a pic of a snow angel. I’m sure one parent will complain, I just don’t care.’

The school is run by the Leigh Academy Trust, who were approached for comment.

In a thread of Tweets, other headteachers also rushed to praise schools for stopping online learning due to snow.

Sue Blyth, a headteacher at Fourfields School Community School in Peterborough, Cambridgeshire, took a swipe at parents who had complained about the decision at her school.

She said: ‘We also did this and then had some parents complain they hadn’t got time to let their children play in the snow because of their full time work! There was a proper Facebook moan about it!

‘Fortunately most families were grateful.’

Another, Ryan Forwood, a PE teacher, said: ‘Very proud that our school took that approach also and also had a lovely email saying please do not feel any pressure to be ‘on it’ today and they’d much rather we enjoyed this unique weather with your family where you can. I thought this was awesome!’

Others praised the decision to stop online learning as ‘brave’. One, an English teacher, said: ‘A school in our area (not ours) called an old fashioned ‘snow day’ and set the following tasks for the day: build a snow man; have a socially distanced good natured snow ball fight; send in snow pictures.

‘A brave head who has the well-being of her staff and students as a priority.’ 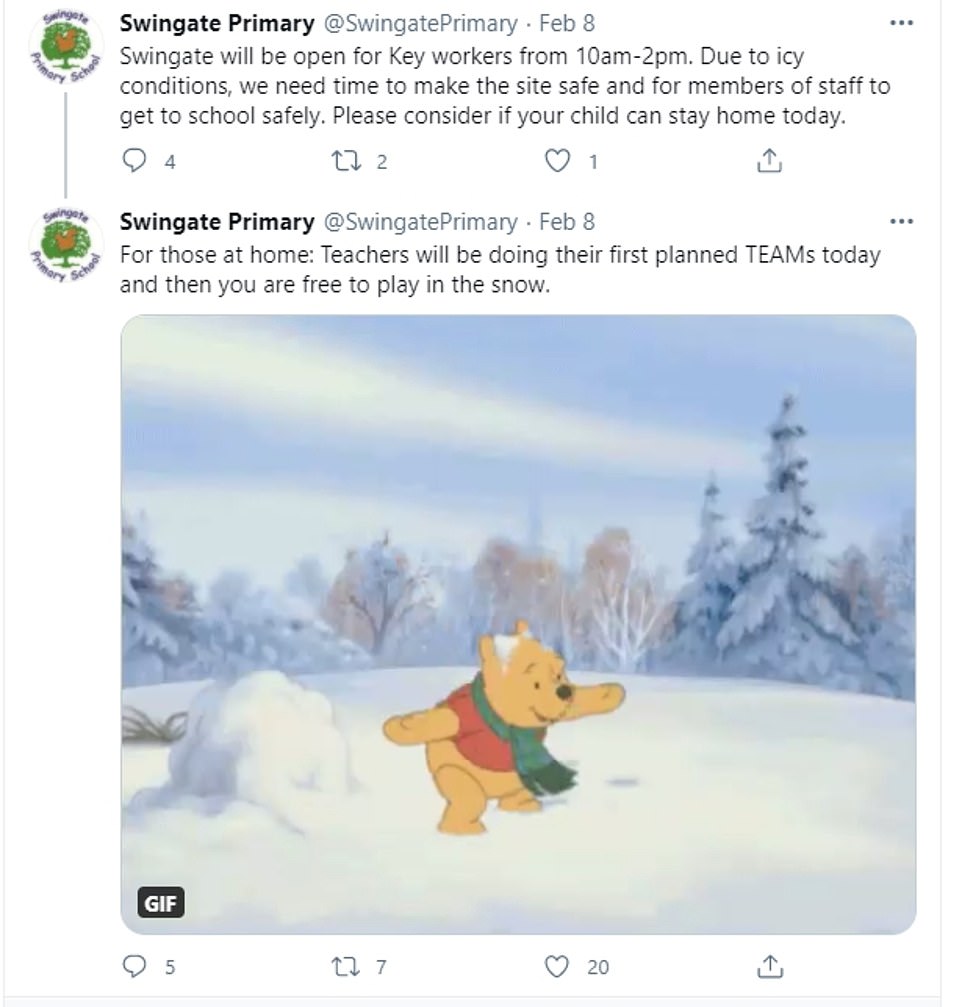 But among anger from parents, a Department for Education spokesperson appeared to back teachers.

A spokesperson said: ‘Schools and teachers are working tremendously hard at delivering remote education while pupils learn from home, and we know that they have been doing an excellent job with students around the country benefiting.

‘Schools are expected to offer 3-5 hours per day of remote education for pupils, dependent on Key Stage, including time for independent study and also either recorded or live direct teaching.’

Asked directly if the department was backing the decision, a spokesperson added: ‘We expect schools to make sensible decisions on it based on their situation and we expect a certain amount of online learning to take place when it is possible.’

And weather experts warn six more inches of snow could be on its way later today along with a -7C chill.

Police have warned people not to travel due to the dangerous conditions.

It comes as council bosses have begged for more students to be home schooled because so many parents have asked to send their children to school during lockdown.

A number of schools across the county are said to be over-subscribed, due to the number of parents who qualify as critical workers during the third national lockdown.

A letter, sent to parents and carers of county pupils by Jane Moore – director of children and family services at Leicestershire County Council, has urged them to teach their children at home if they can.

In the letter, she wrote: ‘Across Leicestershire we are seeing an increasing number of children requiring an onsite school place and, in some places, this is greater than the school’s capacity.

‘The key message from government is to keep your child at home if you possibly can, even if you are a critical worker.

‘To keep both pupils and staff safe, the Leicester, Leicestershire and Rutland Local Resilience Forum (LLR) have set out a guide for school leaders to ensure that those most in need of a place can access one.’

Dancing On Ice: Joe Warren-Plant and Vanessa Bauer return to the rink for group dance during final 0