Ministers will trial round-the-clock Covid vaccinations after bowing to immense pressure to adopt the 24/7 roll-out, according to reports.

A senior Government source claimed this morning that Number 10 is considering a ‘pilot where vaccinations are offered for longer hours’ to gauge whether there is enough demand to keep jab hubs open through the night.

It marks another U-turn for the Government after Boris Johnson claimed earlier this week there was ‘no clamour’ for appointments after 8pm.

The tone deaf comments were met with fury by elderly Brits and critical workers who said they would happily come day or night to speed up the rollout.

But there will be serious doubts about whether ministers are capable of delivering a round-the-clock operation because of issues with supply.

This morning it emerged GPs leading the rollout have been forced to pause vaccinations to allow other parts of the country to catch up.

Practices that have already inoculated every patient over the age of 80 have had their jab deliveries cancelled as minsters want to avoid a postcode lottery, according to The Telegraph.

Matt Hancock hinted this morning that a lack of supply was behind the decision to delay jabs despite the vaccination programme desperately crying out for help to get up to speed. 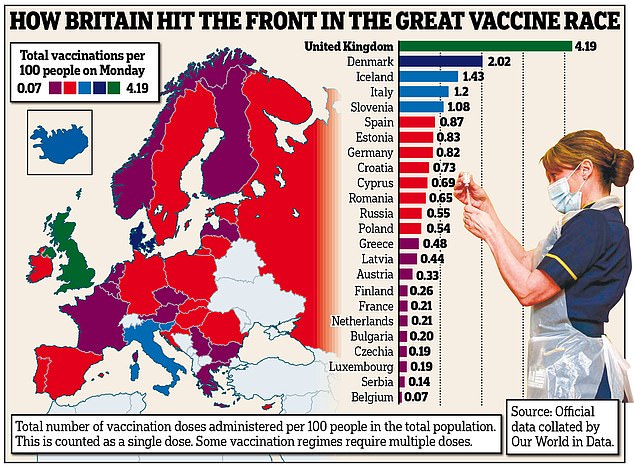 Quizzed about the reports, the health secretary told the BBC Radio 4 Today Programme: ‘The rate-limiting step on the rollout is the supply of the vaccine itself.

‘We are now managing to get that supply more than we have done before and it will increase over the next few weeks,’ he said.

‘We have the capacity to get that vaccine out. The challenge is that we need to get the vaccine in.

‘What I know is that the supply will increase over the next few weeks and that means the very rapid rate that we are going at at the moment will continue to accelerate over the next couple of weeks.’

Britain’s vaccine drive has started to pick up pace following the approval of the Oxford vaccine but has still only seen 2.43million people immunised against the disease since launching at the beginning of December.

It is far short of the 2million a week needed to deliver on Number 10’s ambitious promise to hit a target of 13.4 million jabs by mid-February and end the most draconian lockdown curbs.

She said: ‘We will look at anything and everything that allows us to get this vaccination programme done as quickly as possible’.

Ms Sturgeon said supplies of the vaccine were still ‘relatively limited’, and that with the focus currently on getting jabs to care home residents and those aged over 80, these groups did ‘not lend themselves to out-of-hours vaccination’.

Meanwhile, Defence Secretary Ben Wallace told the Commons that military personnel can ‘do more to assist’, as he suggested that the hold-up was due to a lack of stock and problems in the supply chain.

He added: ‘I could deploy all 100,000 soldiers tomorrow ready to vaccinate but if the stock isn’t there then we’ll have people not… we could employ them better off.

'We must show up no matter what': Foreboding air as people gather in George Floyd Square ahead of Derek Chauvin trial closing arguments

'We must show up no matter what': Foreboding air as people gather in George Floyd Square ahead of Derek Chauvin trial closing arguments 0

Figure that looked like a 'red blob' in a 2,500-year-old Etruscan tomb painting is revealed 0

Jason Rantz: Seattle on life support – here's why businesses and residents are fleeing 0