A mother is so obsessed with the Mr Men franchise she has a memorabilia collection insured for £35,000 and drags her groaning children along to fan


A mother is so obsessed with the Mr Men franchise she has a memorabilia collection insured for £35,000 and drags her groaning children along to fan events.

Michelle Martinez, 48, was hooked on the books from a young age and has tried forcing her own passion for them on to daughter Sophie, 19, and son Jake, 14.

Her love of Mr Men has infiltrated every part of their lives and their semi-detached home in Waterlooville, Hampshire, is crammed with toys, books and collectibles.

They even went on a family holiday to Butlins especially so Ms Martinez could have her photo taken with Mr Bump. 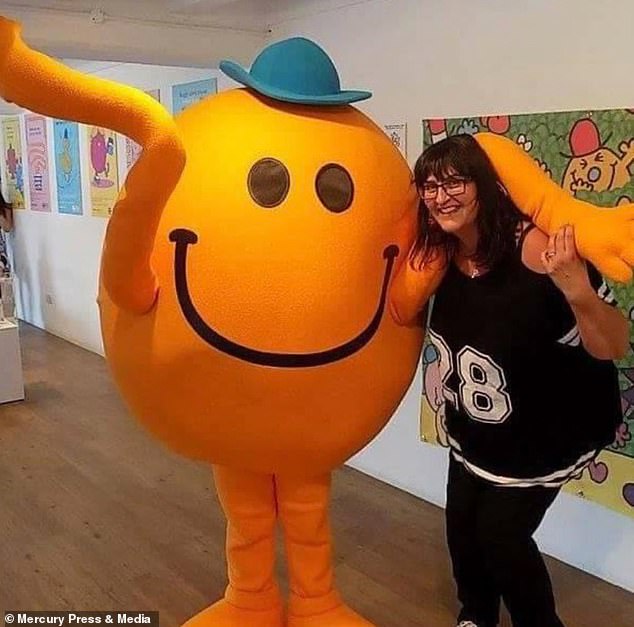 Michelle Martinez, 48, (right) was hooked on the books from a young age, and continues to go to fan events 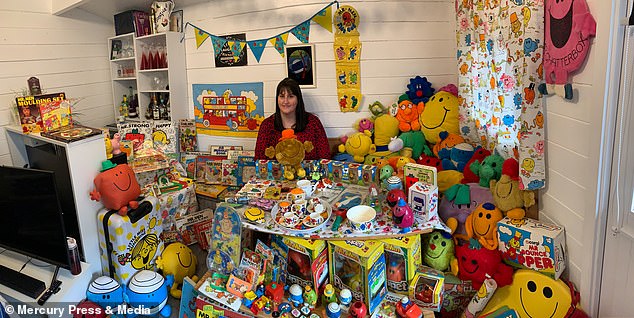 Her semi-detached home in Waterlooville, Hampshire, is crammed with toys, books and collectibles 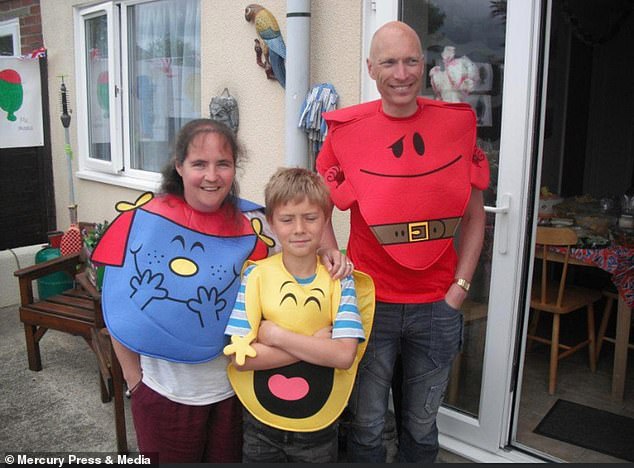 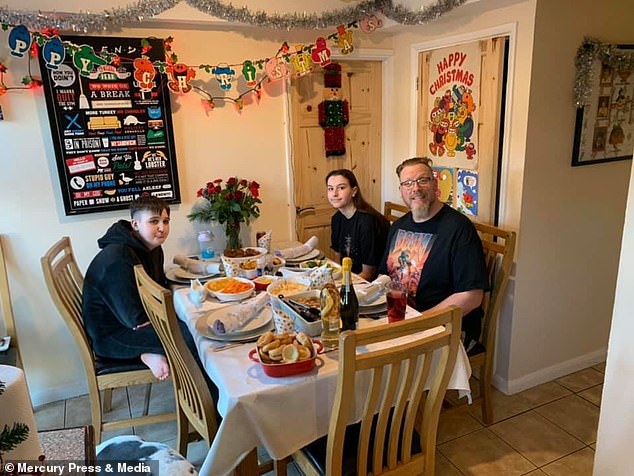 She has tried forcing her own passion for the books on to daughter Sophie, 19, son Jake, 14, and partner Stephen

Jake describes his mother’s fixation with the franchise as ‘childish’ – but the children’s reluctance to embrace Mr Men has not dampened Ms Martinez’ enthusiasm.

She said: ‘I have dragged them up to shopping centres for book signings. When the Mr Men magazine was relaunched, I took them to London to meet Adam Hargreaves [son of creator Roger] at a book signing.

‘I think he was horrified that this 40-year-old woman or something was so excited to see him.

The mother often has to recruit her children to accompany her so she has the guise of going as a parent – rather than a fan in herself.

She once heard that Little Miss Sunshine was appearing in Asda and took Jake along under the ruse it was a routine shopping trip.

‘It was only because I wanted a photograph of Little Miss Sunshine,’ she said.

‘I even dragged them to Butlins as well for a holiday as Mr Men were there and I had my photo taken with Mr Bump.’

Ms Martinez, who is a carer and lives at her home with adults with learning difficulties, owns a collection of Mr Men memorabilia she has had insured for £35,000.

It includes a rare china tea set, two coin-operated fairground rides she bought for £500 each, a Links of London bracelet with a Mr Men charm, light switches, nightdress cases, cuddly toys and the original books.

Jake said: ‘I think mum collecting the Mr Men Little Miss memorabilia can be a bit childish, but it’s cool to have collected so much.’ 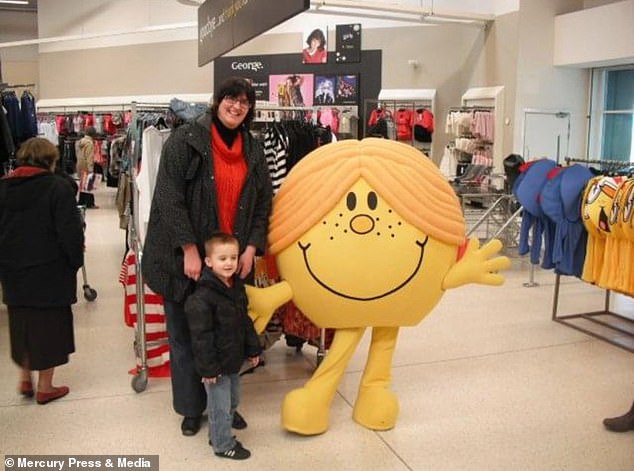 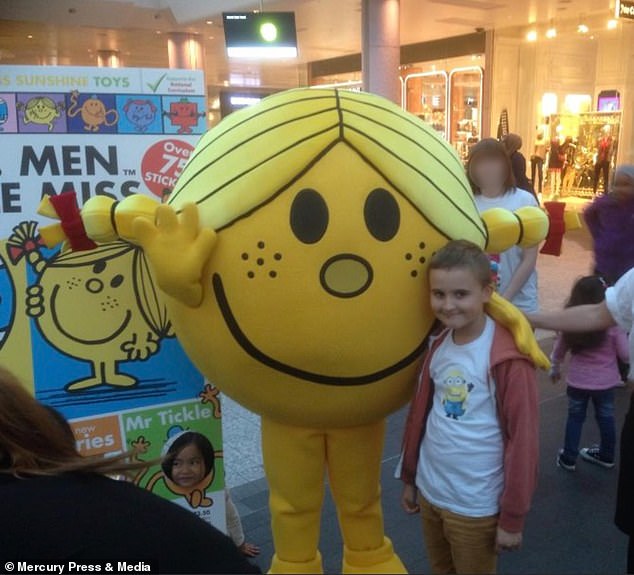 Jake has his photograph taken with Little Miss Sunshine. He described his mother’s obsession as ‘childish’

His mother said: ‘The kids don’t think I’m cool. They’ve never liked it. They have loved every other thing, growing up, apart from Mr Men.

‘They knew I had it all and they weren’t allowed to touch stuff, because they knew if they broke it, I’d be very unhappy.

‘My poor children have endured it. They have been forced to wear Mr Men clothes as children.

The mum has collected items all her life after becoming fixated with the book series as a child.

Her own mother bought the Mr Tickle book in 1971 – the year of its release – when she was pregnant with Ms Martinez as a gift her daughter could keep forever.

‘Once I could understand what my parents were reading to me, I became fixated with them as a child,’ she said.

‘Both my parents worked so I liked the moments when we could be together and they’d read to me.

‘The obsession grew. Children today are obsessed with Paw Patrol and things like that, but mine was Mr Men.

‘For every birthday and every Christmas since, there has been something Mr Men related. 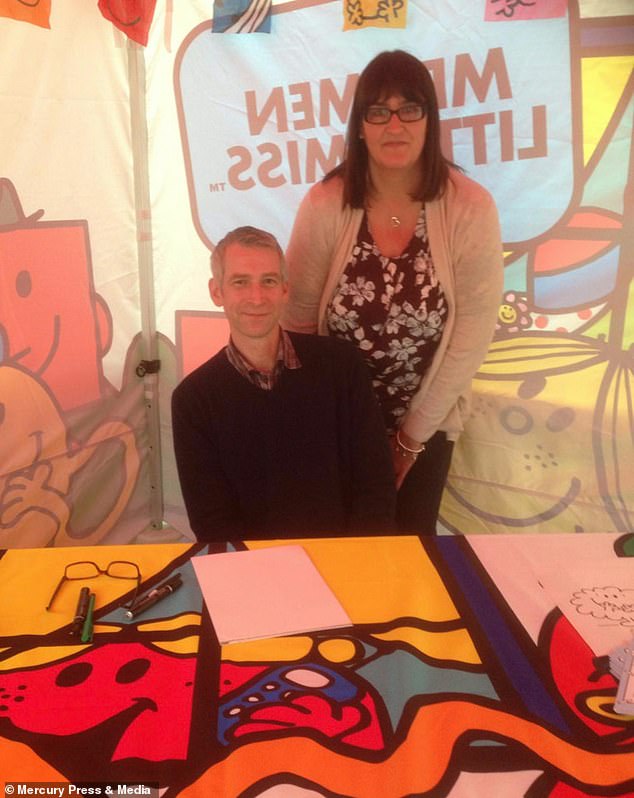 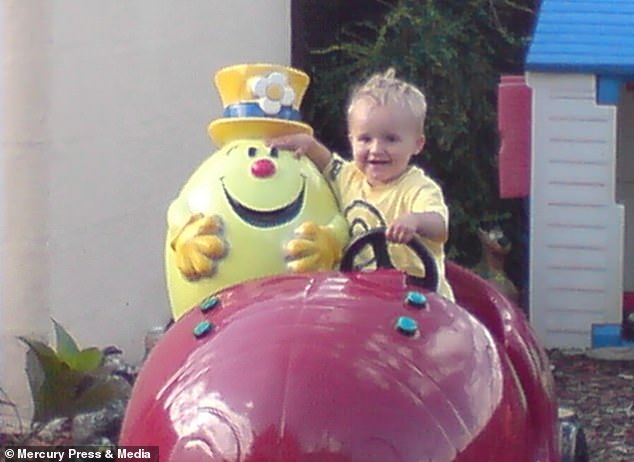 Ms Martinez’s collection amassed and continued in her childhood. She’s taken the 2,000 items with her to the three houses she’s lived in since moving out her childhood home

‘My favourite treat was going to Woolworths on Saturday mornings with my pocket money and picking up a Mr Men book.

‘I had Mr Men wallpaper when I was 12. I still have a roll of that now, which on eBay would cost something like £40 per roll nowadays.

‘I have had Mr Men birthday cakes made and all sorts of things.’

Ms Martinez’s collection amassed and continued in her childhood. She’s taken the 2,000 items with her to the three houses she’s lived in since moving out her childhood home.

She celebrated her 40th birthday in 2012 with a Mr Men-themed party to which all her family and friends – her kids included – dressed as characters.

‘When I counted my items recently, I lost the will to live. I hit 2,000 but just couldn’t carry on. There were lots more, some even in storage,’ the carer continued.

‘So I think I have got a problem. I should have collected stamps instead.’ 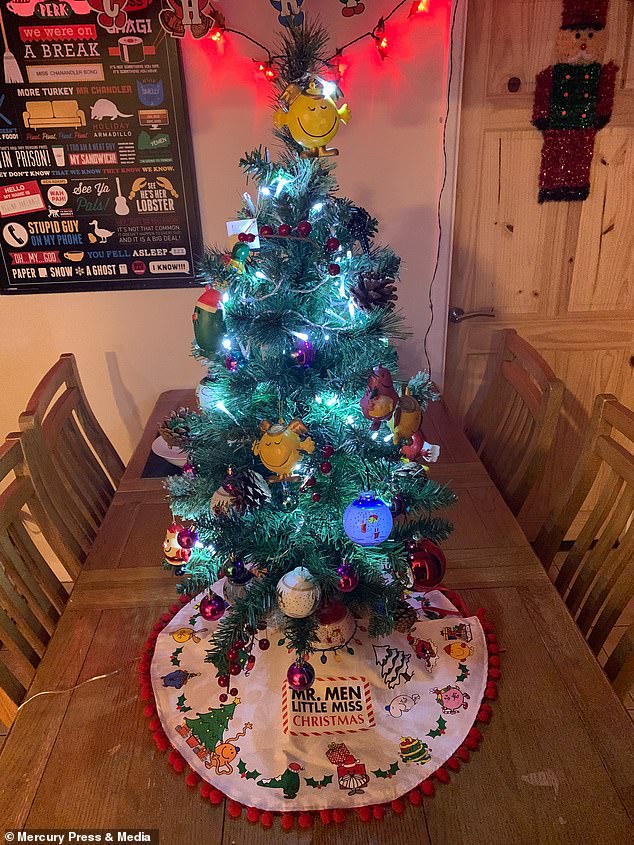 The three wise Mr Men: The family had a franchise-themed Christmas 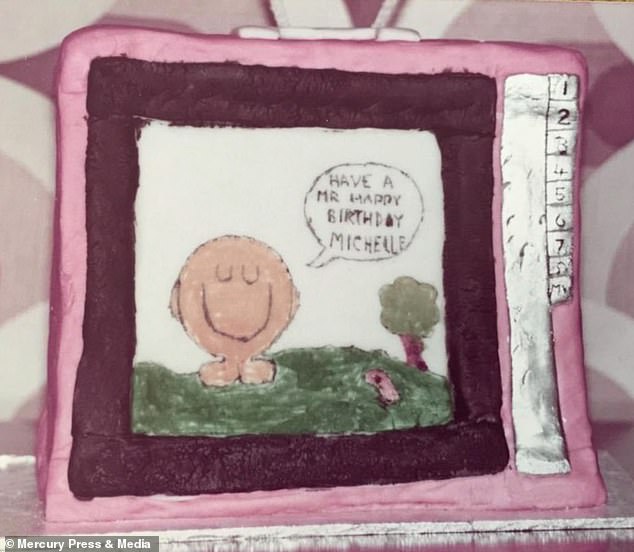 The mother’s cake on her 40th birthday. She said: ‘The kids don’t think I’m cool. They’ve never liked it. They have loved every other thing, growing up, apart from Mr Men’

Mr Men is celebrating its 50th anniversary this year. So, for the first time ever, the brand is inviting fans to choose two new characters to join the iconic family.

Ms Martinez is keen on Mr Calm and Little Miss Kind – even though she’s not a huge fan of the Little Misses, which were an addition in 1981.

‘Mr Strong is my favourite character. He is quite a popular character and the first Mr Men cuddly toy my mum got for me was a Mr Strong cuddly toy.

‘Both Mr Calm and Little Miss Kind are great. I’d choose either of those and that decision has largely been influenced by the pandemic. Everyone needs to be like Mr Calm right now and remain calm, and don’t stress.

‘We should also think of others and not just yourself and be like how Little Miss Kind might be. Her background is she doesn’t just think of herself, she thinks of other people.

‘She believes what is right and is just very, very kind to others. Everyone should be doing that. I can’t choose between her and Mr Calm.’

Roger Hargreaves, the original creator, died after a stroke aged 53 in 1988, by which time his series had sold millions of copies around the world.

Mr Tickle was the first character, a round orange figure with long, bendy arms and who was inspired by Roger’s son Adam.

Adam, who began writing the books after his dad died, said today: ‘It’s amazing to see people are still connecting to the books after 50 years, they have always been about getting people to relate with the unique characters and identify the different traits of their own personalities, so it’s great to involve the fans and let them help shape the next 50 years of Mr Men.

China's Xi warns against 'unilateralism' as tensions with US, neighbors rise

East Village apartment block is $1,600 renting apartments with showers in the KITCHEN

Monster lizard dives into ocean as tourists watch in awe

China's Xi warns against 'unilateralism' as tensions with US, neighbors rise 0

East Village apartment block is $1,600 renting apartments with showers in the KITCHEN 0

Monster lizard dives into ocean as tourists watch in awe 0

5 board members of Texas utility grid operator ERCOT are quitting. They all live out of state. 0