She has amassed millions of social media followers thanks to her appearance on Love Island in 2019, and her impeccable dress sense.

And Molly-Mae Hague showcased her svelte frame in a stylish Nike sports bra and workout leggings at home in Cheshire on Friday.

The reality star, 21, looked typically chic as she captured a mirror selfie and confirmed she was going to ‘try and have a productive day’. 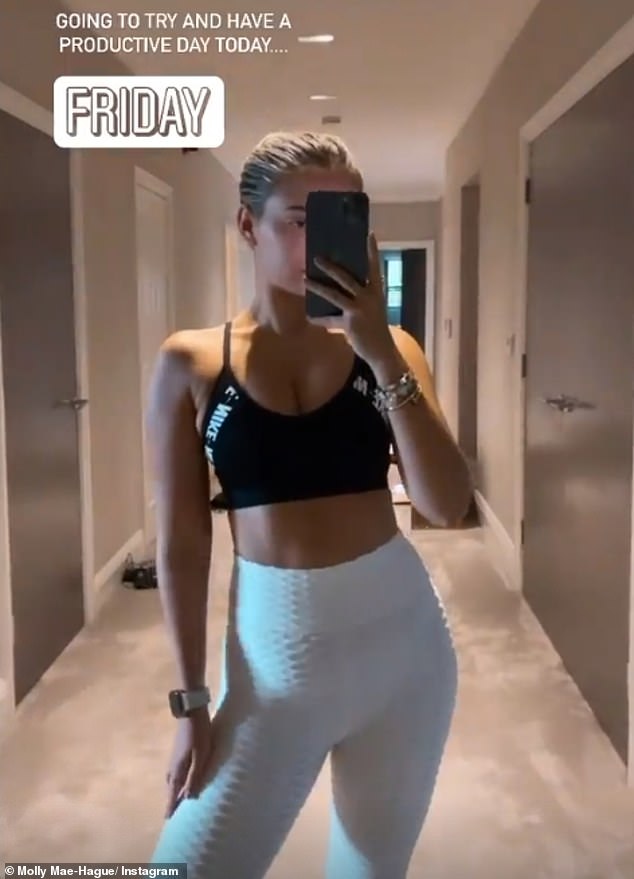 Typically stylish: Molly-Mae Hague showcased her svelte frame in a chic Nike sports bra and workout leggings at home in Cheshire on Friday

She swept her blonde tresses back in a sleek bun and decorated her wrists with eclectic jewellery including an Apple Watch.

Molly-Mae captioned the upload: ‘Going to try and have a productive day today…’

Last week, she paid tribute to her ‘amazing’ friend Cheryl Kellett on Instagram after the mother-of-three lost her battle with bowel cancer.

The Love Island star shared a throwback photo of herself at a garden party with Cheryl alongside some heartfelt words. 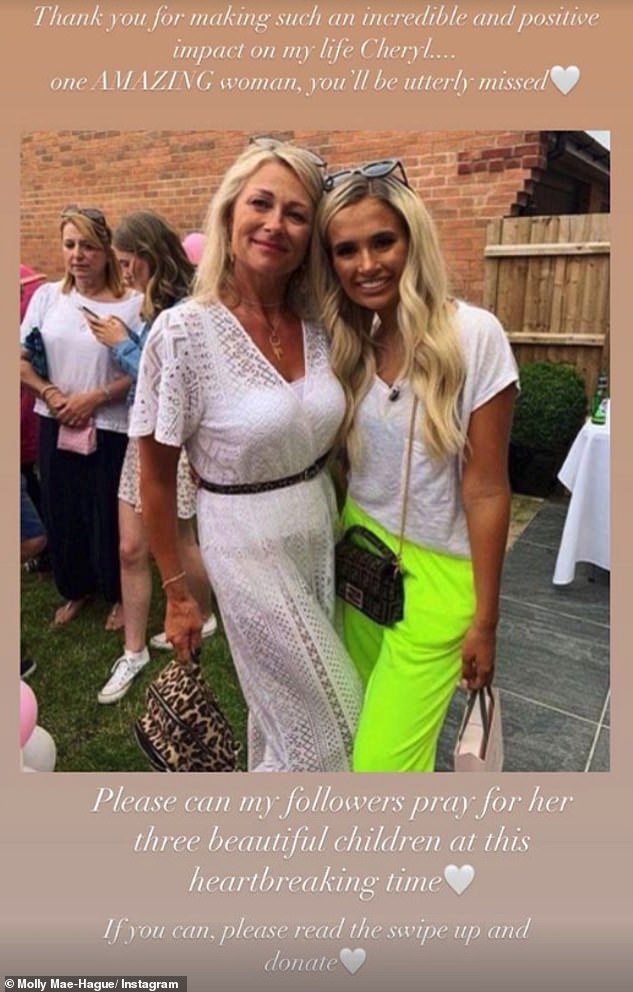 ‘Amazing woman’:The Love Island star paid tribute to her ‘amazing’ friend Cheryl Kellett on Instagram on Thursday, after the mother-of-three lost her battle with bowel cancer

Cheryl was diagnosed with bowel cancer last year and was later told by doctors it had spread to her liver and lungs.

She wrote: ‘Thank you for making such an incredible and positive impact on my life Cheryl….one AMAZING woman, you’ll be utterly missed.’

Mother-of-three Cheryl had organised a fundraiser last month after receiving her terminal diagnosis.

Kelly wrote on her JustGiving page at the time: ‘As if 2020 couldn’t be s****y enough with a global pandemic, earlier this month I was diagnosed with bowel cancer which has decided to take a first class trip to my liver and lungs!

‘I am waiting to see which treatment I will be blessed with, in the meantime I thought I would keep myself busy and focus on something else rather than the s**tshow my family are facing.

‘No doom and gloom allowed!

‘I have taken inspiration from the twins at Coppafeel Charity and have decided to undertake a 5 hour bounce off.

‘The event coincides with the final of TGBBO, so my children and I will be channelling Bake Off vibes as we bounce (expect tunes, glitter and Paul Hollywood masks).

‘We will be bouncing on trampolines for 5 hours and streaming it live on Instagram – pray for my pelvic floor.’

Back in September, Molly-Mae received a shock diagnosis after having a cancerous mole removed from her leg.

Molly-Mae revealed that she learned her mole was a malignant melanoma during a work trip to Italy, when a doctor phoned her to deliver the diagnosis following a recent biopsy.

The social media star initially got the mole on her leg checked out by two dermatologists but was told it was nothing to worry about.

Molly-Mae eventually sought third professional opinion during a routine check-up because she ‘felt something wasn’t quite right’.

The Love Island star had to undergo further surgery.

Bowel, or colorectal, cancer affects the large bowel, which is made up of the colon and rectum.

Most cases have no clear cause, however, people are more at risk if they:

More than nine out of 10 people with stage one bowel cancer survive five years or more after their diagnosis.

This drops significantly if it is diagnosed in later stages.

According to Bowel Cancer UK figures, more than 41,200 people are diagnosed with bowel cancer every year in the UK.

It affects around 40 per 100,000 adults per year in the US, according to the National Cancer Institute.

Graham: McConnell 'put a load on Republicans' back' with anti-Trump speech 0

Men seeking work are driving flood of migrants, with 82% of apprehensions logged as single adults 0