Baseball Hall of Famer Hank Aaron, who battled racial prejudice and hatred on his way to breaking the major leagues' career home run record, has di


Baseball Hall of Famer Hank Aaron, who battled racial prejudice and hatred on his way to breaking the major leagues’ career home run record, has died at the age of 86, the Atlanta Braves announced.

According to a person with knowledge, Aaron died Friday morning after suffering a massive stroke. The person requested anonymity because of the sensitivity of the matter.

“We are absolutely devastated by the passing of our beloved Hank,” Terry McGuirk, Braves chairman, said in a statement. “He was a beacon for our organization first as a player, then with player development, and always with our community efforts. His incredible talent and resolve helped him achieve the highest accomplishments, yet he never lost his humble nature. Henry Louis Aaron wasn’t just our icon, but one across Major League Baseball and around the world.  His success on the diamond was matched only by his business accomplishments off the field and capped by his extraordinary philanthropic efforts.”

Said MLBPA director Tony Clark: “This is a profoundly sad day for baseball and indeed for our entire country. On the field, off the field, for 23 remarkable playing seasons and beyond, Hank Aaron was a Hall of Famer in every sense of the phrase. Generations of players have walked, and will continue to walk, on a trail that Hank Aaron blazed with his determination, courage, singular talent and grace. We send our deepest sympathies to his family, friends and legion of fans throughout the game.”

Aaron played 23 seasons in the major leagues, 21 of them with the Braves franchise – first in Milwaukee, where he made his debut in 1954 and then in Atlanta, from 1966 until 1974. He returned to Milwaukee for his final two seasons, joining the Brewers of the American League before retiring in 1976.

As a youngster he grew up hitting cross-handed and was once advised by an opposing catcher that he should hold the bat with the trademark facing upward so he could see it.

And hit he did.

Born Feb. 5, 1934 in Mobile, Alabama, Henry Louis Aaron reached the majors at age 20, when he hit .280 with 13 home runs and finished fourth in the National League rookie of the year voting.

He quickly established himself as one of the game’s most dependable sluggers. In his second season, Aaron drove in 100 runs for the first time and made the first of a record 21 consecutive All-Star Game appearances.

He became known as “Hammerin’ Hank,” hitting at least 30 home runs in 15 different seasons and driving in at least 100 runs 11 times.

Yet despite his consistent excellence, the game’s ultimate honors often eluded him. Aaron won only one league Most Valuable Player award and one World Series title, both in 1957 when he led the Milwaukee Braves to victory over the New York Yankees in seven games.

His signature moment came on April 8, 1974, when he broke the most cherished record in baseball history. Tied with the legendary Babe Ruth with 714 career home runs, Aaron hit No. 715 with a fourth-inning blast off Los Angeles Dodgers left-hander Al Downing.

Braves radio announcer Milo Hamilton’s call of the record-breaking homer was straight and to the point: “There’s a drive into left-center field. That ball is gonna be … Outta here! It’s gone! It’s 715! There’s a new home run champion of all-time, and it’s Henry Aaron.”

After Aaron rounded the bases, Dodgers announcer Vin Scully described the significance of the home run in a historical perspective. 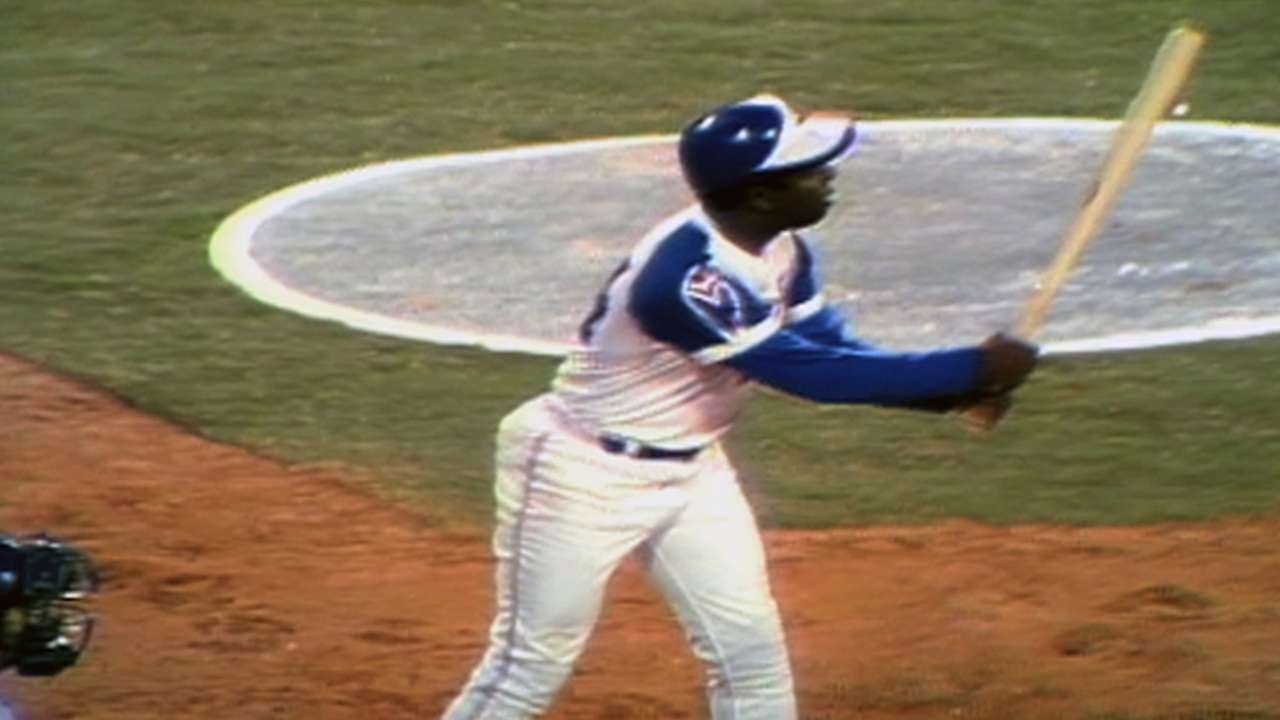 Scully went on to describe Aaron’s visible sense of relief after the tremendous strain he endured chasing Ruth’s hallowed record.

The racial overtones were impossible to miss. A legendary white player had held the record for more than 50 years, and then just a decade after landmark Civil Rights legislation became law, Aaron was about to pass him.

He received countless letters, almost all of them spewing blatant racial hatred. Many of them using the N-word, often multiple times. Some of them even threatening to kill him. Yet he never outwardly let it affect him or his performance on the field.

Despite the pain they caused, he kept all those letters.

“To remind myself that we are not that far removed from when I was chasing the record,” he told USA TODAY Sports in 2014 on the 40th anniversary of his record-breaking homer. “If you think that, you are fooling yourself. A lot of things have happened in this country, but we have so far to go. There’s not a whole lot that has changed.”

Next to Jackie Robinson breaking the color barrier in 1947, Aaron’s feat might be the most significant contribution baseball has made to the Civil Rights movement.

“There isn’t a doubt in my mind that he was the perfect man to do it,” said former MLB commissioner Bud Selig, one of Aaron’s closest friends, “representing this sport socially and everything that happened during that time. Henry took a lot of abuse when he broke that record, but he rose above all that.”

Aaron finished with 755 career home runs, holding the record for 40 years until he was passed by Barry Bonds in 2014. However, he has said the home run record wasn’t his most important statistical accomplishment.

Aaron still holds baseball’s all-time record for most runs batted in, with 2,297. He’s said the ability to bring his teammates around the bases to score was more important to him than hitting home runs. He also remains the all-time leader in total bases with 6,856.

On Jan. 5,  Aaron got vaccinated against COVID-19 in Georgia, hoping to send a message to Black Americans that the shots are safe.

In 1982, he received baseball’s ultimate honor by being inducted on the first ballot into the Hall of Fame. Aaron was named on 97.8% of the ballots, the second-highest percentage in history at the time behind only Ty Cobb.

In 1999, Major League Baseball created the Hank Aaron Award, given annually to the best offensive player in each league.

“Hank Aaron is near the top of everyone’s list of all-time great players,” said MLB commissioner Rob Manfred in a statement. “His monumental achievements as a player were surpassed only by his dignity and integrity as a person. Hank symbolized the very best of our game, and his all-around excellence provided Americans and fans across the world with an example to which to aspire. His career demonstrates that a person who goes to work with humility every day can hammer his way into history – and find a way to shine like no other. “