MICHAEL KNIGHTON has vowed to complete a “hostile” takeover of Manchester United. The 70-year-old served as a director at Old Traffo

MICHAEL KNIGHTON has vowed to complete a “hostile” takeover of Manchester United.

The 70-year-old served as a director at Old Trafford between 1989 and 1992 before waltzing off to buy, and even manage, Carlisle United.

The former headmaster, turned football owner, turned poet hellbent on ousting the Glazers has lived a colourful life in and out of the beautiful game.

Let’s take a look at the man trying to become the owner of Manchester United.

Knighton comes from a strong footballing family, with his great-grandfather Willie Layton having starred for Sheffield Wednesday in the 1900s. 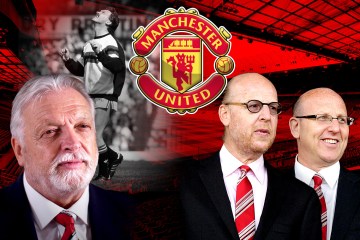 Knighton himself possessed a talent for football growing up – representing Everton’s academy as a teenager.

He even told EFC Heritage Society that a member of the Toffees’ coaching staff had remarked that he was the “best youngster at that age he had ever seen”.

The homesick teen would head to Coventry to be closer to his Derbyshire home, however, before a thigh injury unfortunately put paid to his hopes of becoming a professional.

After his football dreams were shattered Knighton initially turned to academia, attending Durham University to complete a degree in physical education.

He clearly couldn’t get enough of learning, as he then went back to study philosophy, politics and Mandarin Chinese, before also attaining an FA coaching badge.

Knighton turned to teaching in 1976, moving to Huddersfield to take on a role at St. David’s School, going on to rise to headmaster in 1980.

Three years on he took the unorthodox route of buying the entire school, but in 1984 he quit teaching in order to start a property business.

He attained a number of assets across the Channel Islands and Isle of Man, before later resurfacing in football…

In August 1989 Knighton exploded onto the First Division scene by lodging a staggering £20million bid to buy Man United.

The bid was the largest sum offered for a British club in history at the time and was duly accepted by then-chief executive Martin Edwards.

Desperate to impress the Old Trafford faithful, Knighton donned a full United tracksuit and astonishingly took to the to pitch to try and impress fans with his football skills, performing keepie-uppies for the crowd prior to a match against Arsenal in 1989.

He also pledged to invest £10m in Old Trafford itself, but when two of his backers pulled out, the deal hit the rocks.

Knighton tried to get other backers onboard but as the deadline to prove his funds approached he opted to back out of the deal – instead taking a seat on the club’s board.

After three years with Sir Alex Ferguson and Co, Knighton departed to fulfil his ambition of owning a club outright.

The Man United board member poses with Sir Alex[/caption]

In 1992, Knighton completed the purchase of Division Three strugglers Carlisle United, boasting that he would take them to the Premier League.

Things started well, with Mick Wadsworth leading them to the Div Three title in the 1994-95 season, before they won the 1995 Auto-Windscreens Shield final in what Knighton described to the News and Star as his “greatest day in football”.

Cracks began to appear from there, however, with Wadsworth leaving for Norwich and his side being relegated back to the bottom tier after choosing to invest in their Brunton Park home rather than the playing squad.

Fans found a hero in Wadsworth’s successor Mervyn Day and they were able to get promoted back to Division Two at the first time of asking… only for Knighton to sack his popular manager in September of the following season.

I was always a tracksuit chairman anyway

Already facing accusations of possessing an enormous ego, he replaced Day with… himself – although young coaches John Halpin and David Wilkes did the actual work.

He later explained to the News and Star: “I wanted to give those two young lads a chance. I said if there was any flak, I would take it. I was always a tracksuit chairman anyway.

“But if you’re a manager you select the team, take the coaching, and do the team-talks at half-time. I never took one coaching session or did one team-talk, ever.”

During his whacky spell at Brunton Park he tried to launch his own local newspaper, before making headlines in more established publications by claiming he and his wife had seen UFOs.

Speaking to the News and Star in more recent years Knighton bemoaned the treatment his extra-terrestrial encounter got, doubling down: “My wife would tell you the same story of what we saw. I said, ‘Look, it wasn’t of this world’.

“Oddly enough now, with what’s been released from the Pentagon, you don’t get ridiculed quite the same way.”

After another relegation fans turned on Knighton and launched a campaign to oust him, calling on fellow supporters to boycott the club shop and to stop buying tickets.

Carlisle were just moments away from dropping out of the Football League in 1999, only for goalkeeper Jimmy Glass to score a last-gasp goal against Plymouth Argyle to keep them up on the final day.

Eventually Knighton’s position became untenable and he finally sold the club in August 2002.

Reflecting on his tenure, he admitted: “I’m not going to sit here and say Michael Knighton was a saint who’s got no flaws.”

Following his acrimonious Carlisle departure, Knighton sought refuge in painting and returned to the Channel Islands.

Asked what he did after selling up by the News and Star, he replied: “I went straight into my art studio and painted for about ten hours.”

Living on the island of Sark, which has a population of around 500, Knighton lived a solitary existence.

He said: “It was wonderful. I loved it. My only two friends were Henry – a bicycle I had – and Phoenix, who was a seagull I rescued. It had a broken wing, and I reared him in the bath.

“He used to sit on my shoulder and rub his head [against me]. He thought I was his mother. The day I threw Phoenix back to his own kind, tears were rolling down my face.

I used to sketch all day

“And he circled, and kept coming back. Then he realised, ‘This is where I need to be’, and he went.

“There was a monk I also got to know very well. I used to go to Evensong at the local church on Sundays. That was it. I used to sketch all day.”

It later emerged than Knighton had been working as an artist and poet under pseudonym Kongthin Pearlmich.

His works, including a piece called “The Man Delusion”, which appears to hit out at Richard Dawkins’ book “The God Delusion”, have been displayed at King’s College, Cambridge, and have sold for big money.

A spokesperson for Kongthin Pearlmich told the Telegraph in 2008: “One has been offered to Canterbury Cathedral, another to the Vatican, while the fourth went to a private collector in America and was reputedly sold for $125 million (£69.7 million).”

I made £100 from leftover holiday money – how you can too

Knighton has also posted a series of poems to his personal website, with some pieces entitled “The Vagrant”, “Myths”, “Kindred Souls” and the most recent, “Double Sonnet, Double Trouble”.

Perhaps the latter could be about Manchester United’s recent fortunes…

Connecticut mom who killed kids, then herself laid to rest alongside them 0