Rep. Marjorie Taylor Greene finally said she was sorry for backing QAnon and saying 'those things that are wrong and offensive,' but she had no rem

Capitol Police apologizes, admits advanced intel showed Congress was target before insurrection
'We did not do enough': Acting Capitol Police chief apologizes to lawmakers for handling of Jan. 6 riot
Cuomo apologizes amid harassment claims, says he was 'being playful,' never intended to offend or cause harm


Rep. Marjorie Taylor Greene finally said she was sorry for backing QAnon and saying ‘those things that are wrong and offensive,’ but she had no remorse over her treatment of Parkland schol shooting survivor David Hogg.

‘David Hogg was working with the organization that was, they were going around working hard for strict gun control laws,’ Greene said. ‘I’m very opposed to those policies and so being in the same situation as David Hogg, my voice matters too – and so no, I’m not sorry for telling him he shouldn’t push for gun control.’

Greene assembled a press conference outside the Capitol Building Friday morning in the aftermath of the Democrat-led House’s decision to strip her of her committee assignments in a vote Thursday evening.

She also shared more details an incident with a gun at her school, something she had previously alluded to.

The Georgia Republican got angry when reporters asked her about some of the controversial comments she made that led to the vote, with a question about her support on Facebook for executing House Speaker Nanchy Pelosi prompting her to flee the scene.

‘You know, here’s the thing, when you want to keep telling the same story over and over, but you don’t want to tell the truth, that’s your problem. And that is how we end press conferences,’ she said marching off toward the Capitol Building, with a gaggle of reporters in hot pursuit. 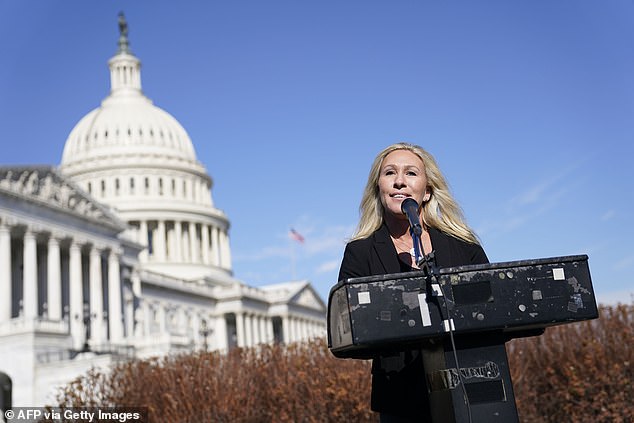 Rep. Marjorie Taylor Greene speaks to reporters outside the Capitol Building Friday on the heels of being pushed out of committees for making controversial statements 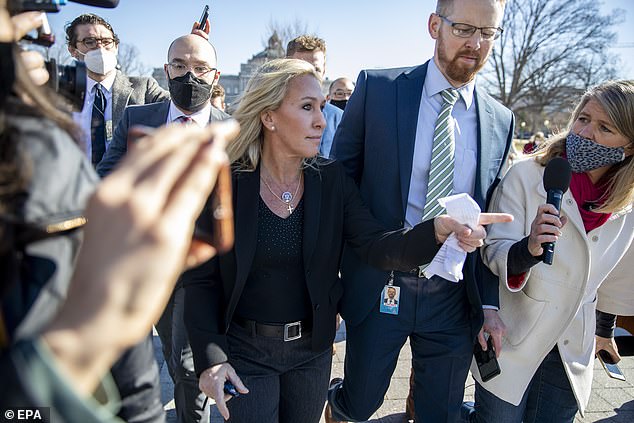 Rep. Marjorie Taylor Greene got annoyed with a question about her indicating support for executing House Speaker Nancy Pelosi and ended the press conference, heading back to the Capitol Building with a gaggle of reporters in tow 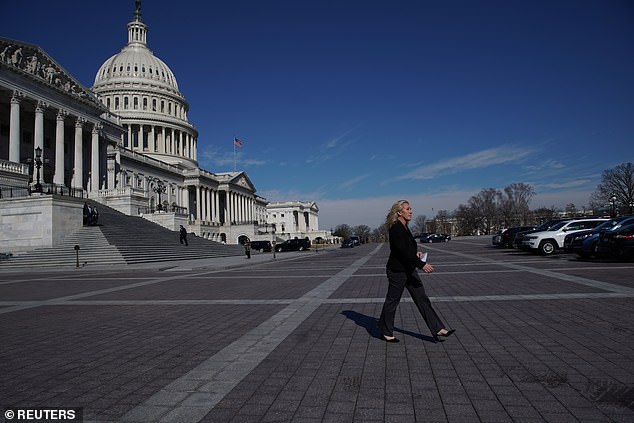 Rep. Marjorie Taylor Greene walks out of the Capitol Building to address the press Friday morning 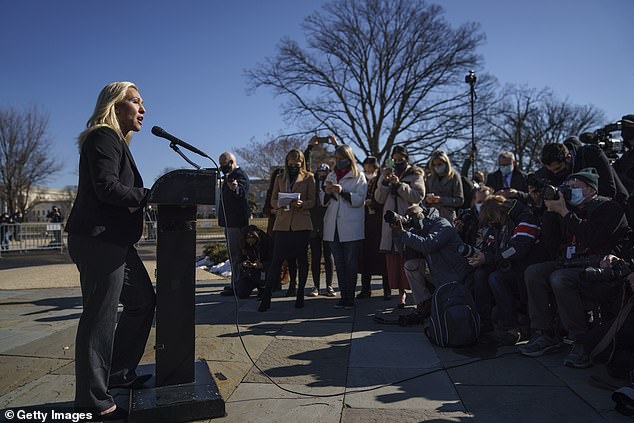 Reporters gathered on Capitol Hill for a press conference with Rep. Marjorie Taylor Greene, who was ousted out of her committee assignments by the majority-Democrat House of Representatives

Before that, Greene had been asked by a reporter if there were statements she was sorry she made.

‘Oh, of course, I’m sory for saying all those things that are wrong and offensive and I sincerely m ean that and I’m happy to say that, I think it’s good to say, say when we’ve done something wrong,’ she said.

Immediately after that, she said she was not sorry for harassing Hogg, noting that he was an ‘adult’ at the time.

After CNN reported on her Facebook posts that indicated she supported top Democrats being killed a viral video came out of her running after Hogg when the gun control activist was lobbying on Capitol Hill.

‘I want you to know I know that fear David Hogg felt,’ she said Friday. ‘It’s terrifying.’

Greene said when she was in 11th grade, at age 16, one of her schoolmates brought three guns into a classroom, which led to students being in a five-hour hostage situation.

‘It’s terrifying when the only person in the building with a gun is very upset and is there to do evil. And there’s no good guy with any guns to protect us,’ she said.

At the top of the press conference, Greene told several dozen masked reporters that she ‘truly’ supported the freedom of press.

‘I think it’s one of the things that makes our country so great and I really hope that you’ll be able to tell my story a little bit better,’ the Georgia lawmaker said.

She had woke up in a fighting mood Friday, calling fellow Republicans who voted to strip away her committee assignments ‘morons’ and embracing her reduced stature as liberating.

‘I woke up early this morning literally laughing thinking about what a bunch of morons the Democrats (+11) are for giving some one like me free time,’ she wrote, just hours after taking to the House floor to disavow QAnon conspiracy theory beliefs she said she gave up in 2018.

‘In this Democrat tyrannical government, Conservative Republicans have no say on committees anyway. Oh this is going to be fun!’ she wrote, shortly before 8 am on Twitter.

She reiterated the point several times during the press conference. 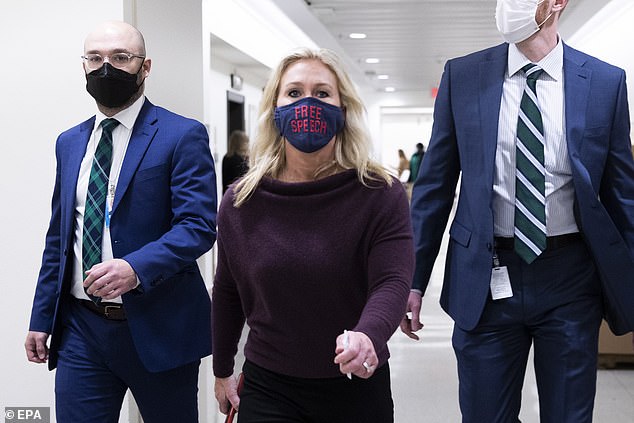 Republican Representative from Georgia Marjorie Taylor Greene (C) walks on Capitol Hill in Washington, DC, USA, 04 February 2021. She said it would be ‘fun’ being kicked off committees, and called those who voted against her ‘morons’

Greene’s new posture came after earlier indicating she planned to fight to try to get her assignments back, after the Democratic-run House voted 230-199 to take away her Education & Labor and Budget Committee assignments.

It had echoes of the way President Trump tried to ridicule his political opponents before he got kicked off Twitter following the Jan. 6. MAGA riot.

On Thursday night, Greene retweeted a post from Andy Biggs, a Republican congressman from Arizona, telling his colleagues ‘not to give in to the Left’s lawless authoritarianism.’

‘Time for Republicans to do what’s right and correct this unprecedented wrong. Put Congresswoman Marjorie Taylor Greene back on her committees,’ Biggs wrote.

One House Democrat, Rep. Jimmy Gomez of California said the punishment was not enough, and is pushing to have her expelled from the House. He also said he would support a resolution to censure her, although he wrote in an op-ed that would be insufficient. 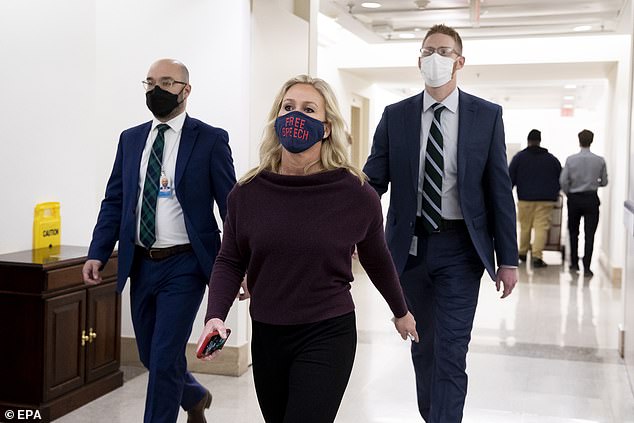 Greene said she gave up on her QAnon beliefs in 2018 and that Sept. 11th ‘happened’ 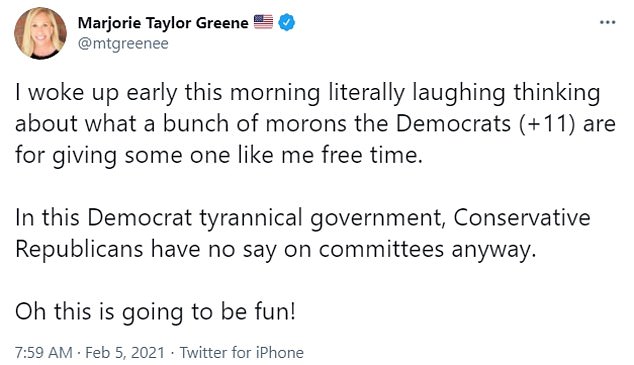 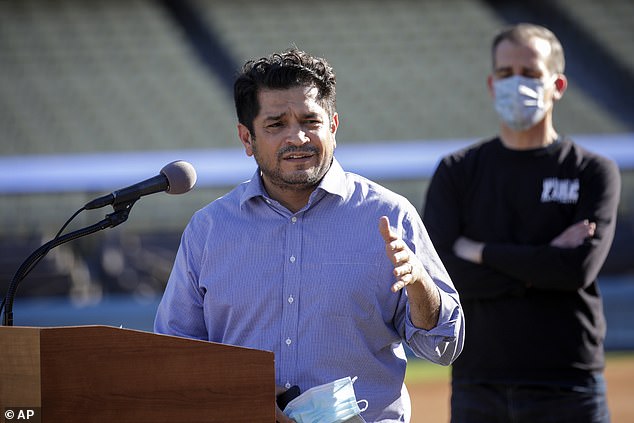 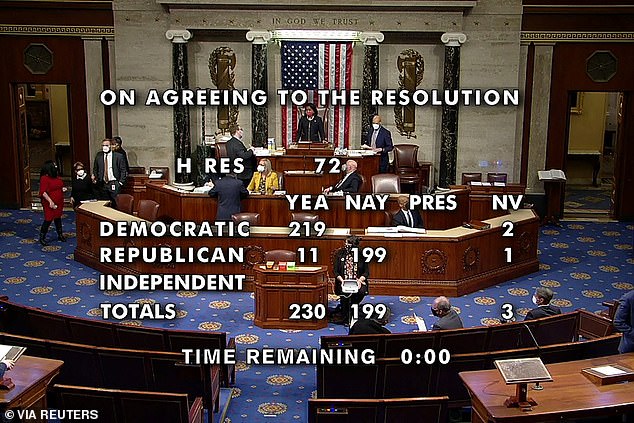 The House voted 230 to 199 to strip her committee assignments

‘If you look at her behavior and comments — in the context of what had been going on in the country before Nov. 3, then after the elections, and finally during and after the insurrection that occurred on Jan. 6 — removing her from the committees is not enough, he wrote in an op-ed for NBC.

‘It’s a great first step, because somebody who peddles in lies and conspiracy theories should not have a platform to try to influence the education policy of the United States. But it’s not enough.

THE CLAIMS TAYLOR GREENE HAS NOT PUBLICLY RENOUNCED

‘She participated in inciting the insurrectionists who stormed the U.S. Capitol to overturn the results of a free and fair election, which is the cornerstone of our democracy,’ he continued.

‘Censuring her does not send a strong enough message to the country about how seriously the House of Representatives takes individuals who peddle in lies, who use the language of political violence and who try to incite violence in order to get their way in either electoral politics or in the legislative process,’ he said of a method that has been used to rebuke lawmakers for campaign finance violations and language unbecoming of the House.

‘And even after facing the possibility of punishment by the House, she hasn’t apologized: instead, she blamed the backlash to her dangerous statements on cancel culture, simply affirmed the fact that 9/11 happened, that school shootings aren’t all fake and said that, when it came to her embrace of the cult-like QAnon conspiracy theory, she had been ‘allowed to believe things that weren’t true.’

She also continued to fundraise of the controversy, he noted. She will continue to be able to try to build her profile, while no longer having to put in committee work.

Democrats, and 11 Republicans, voted Thursday to remove Greene from both her committee assignments for espousing QAnon conspiracies before being elected to Congress – including supporting calls online for Nancy Pelosi’s execution.

The 230-199 vote created the simple majority needed for Greene to get booted from her posts on the Education and Labor Committee and Budget Committee.

Ahead of the vote Thursday, Greene dramatically abandoned her QAnon conspiracy theories in a speech to the House of Representatives.

The Georgia Republican said ‘9/11 absolutely happened,’ and that ‘school shootings are real,’ disclaiming two of the bizarre claims which had made her the focus for opprobrium from Democrats and condemnation from her GOP colleagues.

‘I also want to tell you 9/11 absolutely happened. I remember that day crying all day long watching it on the news. It’s a tragedy for anyone to say it didn’t happen,’ Greene told the House

‘Later in 2018 when I started finding misinformation, lies, things that were not true in these QAnon posts, I stopped believing it,’ Greene said during her floor remarks. ‘So I walked away from those things ‘

FDA recommends pause in use of Johnson & Johnson vaccine due to blood clots: Latest COVID-19 updates 0