The Orthopaedic Clinical Nurse Specialist, 27, shared a selfie receiving the injection to Instagram as she thanked the medical field and hoped that ‘it’s the beginning of the end’.

She revealed she tested positive for the novel coronavirus in December after catching it for the first time in March, and she disclosed she also had antibodies, leading her to question if she had the mutant strain. 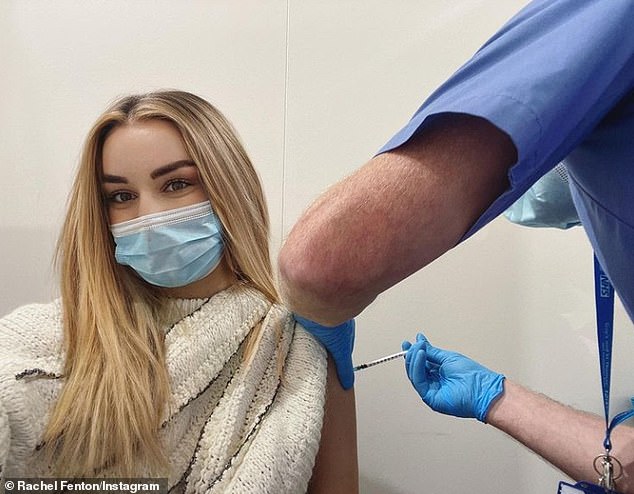 Vaccine: The Orthopaedic Clinical Nurse Specialist, 27, shared a selfie receiving the injection to Instagram as she thanked the medical field and hoped that ‘it’s the beginning of the end’

The blonde beauty sported a face mask and cream jumper as a fellow nurse pressed a needle into her exposed arm while wearing gloves and medical scrubs.

The NHS frontline worker wrote in the accompanying caption: ‘The beginning of the end. thank you to all the incredible doctors and scientists for creating this vaccine and helping us become one step further to beating this virus’ (sic) .

Rachel took to her social media just before Christmas in 2020, to reveal her ‘scary’ news and said anyone who has been infected before is not immune to catching the virus again.

She wrote on Twitter: ‘I’ve been re-infected with COVID-19. I tested positive back in March and also had the antibodies. 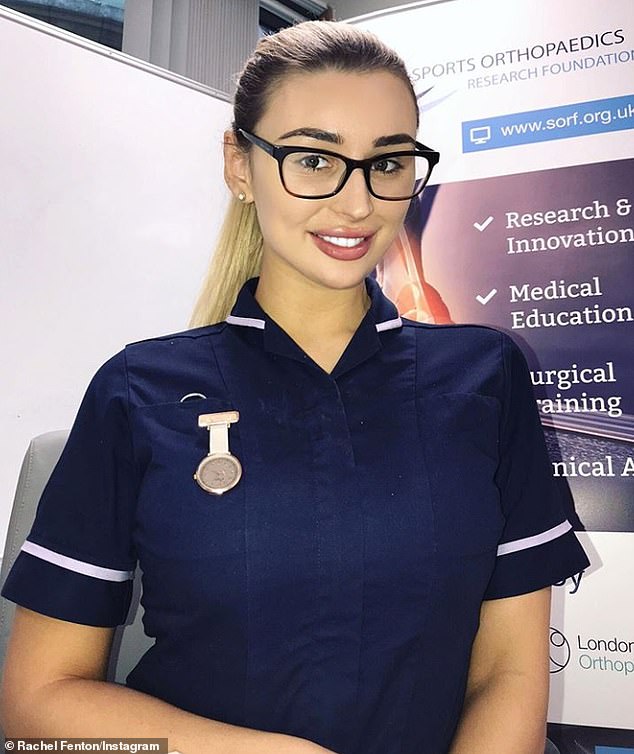 Shock: She revealed she tested positive for the novel coronavirus in December after catching it for the first time in March, and she disclosed she also had antibodies, leading her to question if she had the mutant strain

‘I knew reinfection did happen but I didn’t think it was that common? I think it’s important people know that reinfection is happening, it could be the new strain?

‘I’ve had another positive swab recently. I had very mild symptoms which were not like the symptoms I had before.

‘Has anyone else experienced a second positive Covid-19 swab?’

Then taking to her Instagram Story, Rachel discussed her positive test result further and said that luckily she had been on annual leave and hadn’t been in contact with patients.

She said: ‘I wasn’t sure if I should talk about this, but it’s quite important. I was diagnosed with Covid back in March. I also had the antibodies.

‘I’m tested weekly as a nurse and I’ve always tested negative since, but I’ve recently tested positive again. I’ve been reinfected with the virus.

‘It’s quite scary. I knew reinfection did happen but I was not aware it was that common. Clearly there is another strain of it around.

‘Everyone needs to be extremely careful. Reinfection does happen. Once you’ve had it, you are not immune to it.

Diagnosis: Rachel took to her social media just before Christmas in 2020, to reveal her ‘scary’ news and said anyone who has been infected before is not immune to catching the virus again

‘I was on annual leave, so there was no patient contact, thank God.

‘It’s so important to socially distance and wear a mask and it’s important to know reinfection happens even if you have the antibodies.’

‘Show us the evidence’: Scientists call for clarity on claim that new Covid-19 variant strain is 70% more contagious

The Prime Minister has warned the new variant of coronavirus may be up to 70 per cent more transmissible than previous strains and could overwhelm the NHS.

But last night one scientist demanded greater transparency over the number that shut down swathes of the UK.

Carl Heneghan, Professor of Evidence Based Medicine at Oxford University’s Nuffield Department of Primary Care, expressed scepticism over the 70 per cent figure.

He said: ‘I’ve been doing this job for 25 years and I can tell you can’t establish a quantifiable number in such a short time frame.’

He added ‘every expert is saying it’s too early to draw such an inference’.

Professor Heneghan said there was no doubt this time of the year, the ‘height of the viral season’, was a difficult time for the NHS. But he said failure to put out the basis of the figures was undermining public trust.

He added: ‘I would want to have very clear evidence rather than ‘we think it’s more transmissible’ so we can see if it is or not.

‘It has massive implications, it’s causing fear and panic, but we should not be in this situation when the Government is putting out data that is unquantifiable.’

He added: ‘They are fitting the data to the evidence. They see cases rising and they are looking for evidence to explain it.’

Back in April, Rachel had said she was awaiting a negative test after falling ill, so she could return to work.

At the time, she revealed she struggled to be sick without her family close by.

She said at the time: ‘I’ve been having lots of messages asking how I am and when my re-swabs are and what’s the situation moving forward.

‘I’ve had my first swab done and I’m going for my second one tomorrow. I haven’t had any results back yet but I think I get them back on Friday.

‘But I am not entirely sure. I know my work are really busy swabbing other nurses, so just having to be quite patient with this whole process.’

She continued: ‘My symptoms have completely gone now which is really good. I feel completely back to normal. I feel maybe a little more fatigued than I normally would.

‘I’m still isolating at the moment until I get my two negatives and I can go back to work. I’m going to be in my flat with my flatmate.

‘Interestingly, she has had no symptoms whatsoever of coronavirus. She has been living with me when I got my positive diagnosis and she has not presented any symptoms.

Rachel had also urged anyone else struggling, to do some online quizzes, saying she was ‘really struggling over Easter, not seeing her family’ and that they helped.

At the start of the month, Rachel had taken to Instagram as she discussed losing her sense of taste and smell, and revealed she had experienced sleep disturbance and flushed cheeks.

Alongside a snap in her nurse uniform, Rachel penned: ‘I’m so overwhelmed & grateful for everyone’s lovely messages of support at this time.

‘It’s scary and uncertain for so many – I’m determined to beat this virus as soon as possible so I can get back to the hospital to help those most in need. Sending love to everyone & hope you’re all staying safe and well x’.

Taking to her Stories, Rachel clarified her own symptoms from the virus.

She recalled at the time: ‘I first started feeling bad last Thursday, my sense of taste and smell started to really go on Saturday.

‘I think my taste is slightly coming back but I do know people whose symptoms have lasted two, three weeks…

‘My sleep is really disturbed, I wake up in the middle of the night and I see things in my room and not know what they are. It’s really weird.’

Revealing that she was feeling better, Rachel continued: ‘My chest pain is kind of going. I feel OK, I haven’t got a cold anymore or a sore throat so I hope I’m on the mend.

‘I know people who have felt better before they feel worse so I hope that isn’t going to happen to me.

‘One of my friends suggested I put myself forward for clinical trials to help the NHS find a vaccine and that’s something I’m considering.’

Unusual: Keen to spread word about the virus, the reality star tweeted about her symptoms earlier on in 2020

Secret Service spent $144,000 renting apartment beside Ivanka and Jared's house to use bathroom 0