Kenosha gunman Kyle Rittenhouse has been spotted allegedly flashing white power signs and wearing a ‘free as f**k’ t-shirt at a Wisconsin bar while out on bail.

The 18-year-old, who is awaiting trial for killing two Black Lives Matter protesters and wounding a third, was snapped at Pudgy’s Pub in Mount Pleasant last week with his mother, making the ‘OK’ sign often used by white supremacist groups.

Prosecutors are now looking to change the terms of his bond agreement to stop him repeating the behavior. 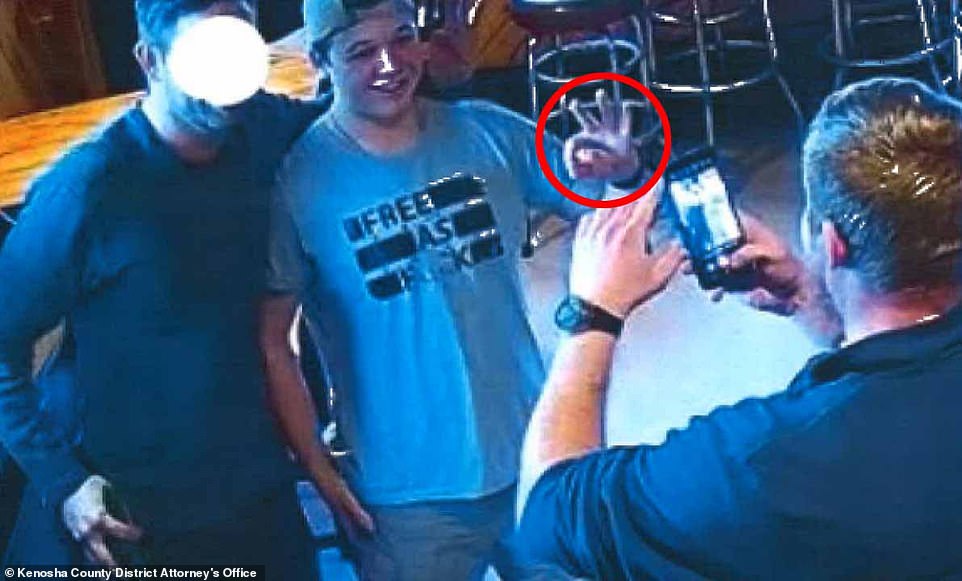 They claimed he drank three beers at Pudgy’s. It is legal in Wisconsin for underage people to drink with their parent’s consent.

Patrons serenaded him with the Proud Boys anthem Proud of Your Boy which was originally written for the Disney film Aladdin.

Rittenhouse stayed with the Proud Boys for the entire time he was in the bar, according to the prosecutors’ motion. 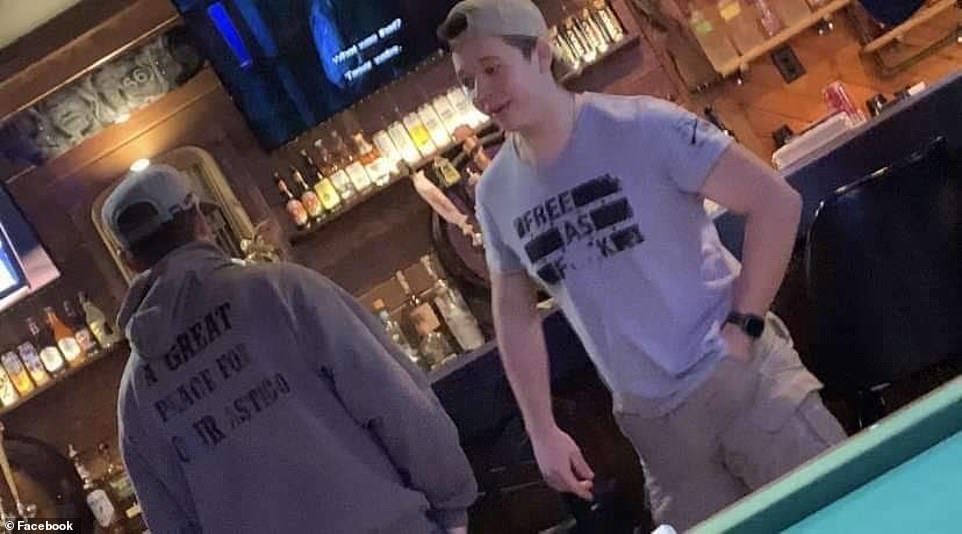 The 18-year-old, who is awaiting trial for killing two Black Lives Matter protesters and wounding a third, was snapped at Pudgy’s Pub in Mount Pleasant 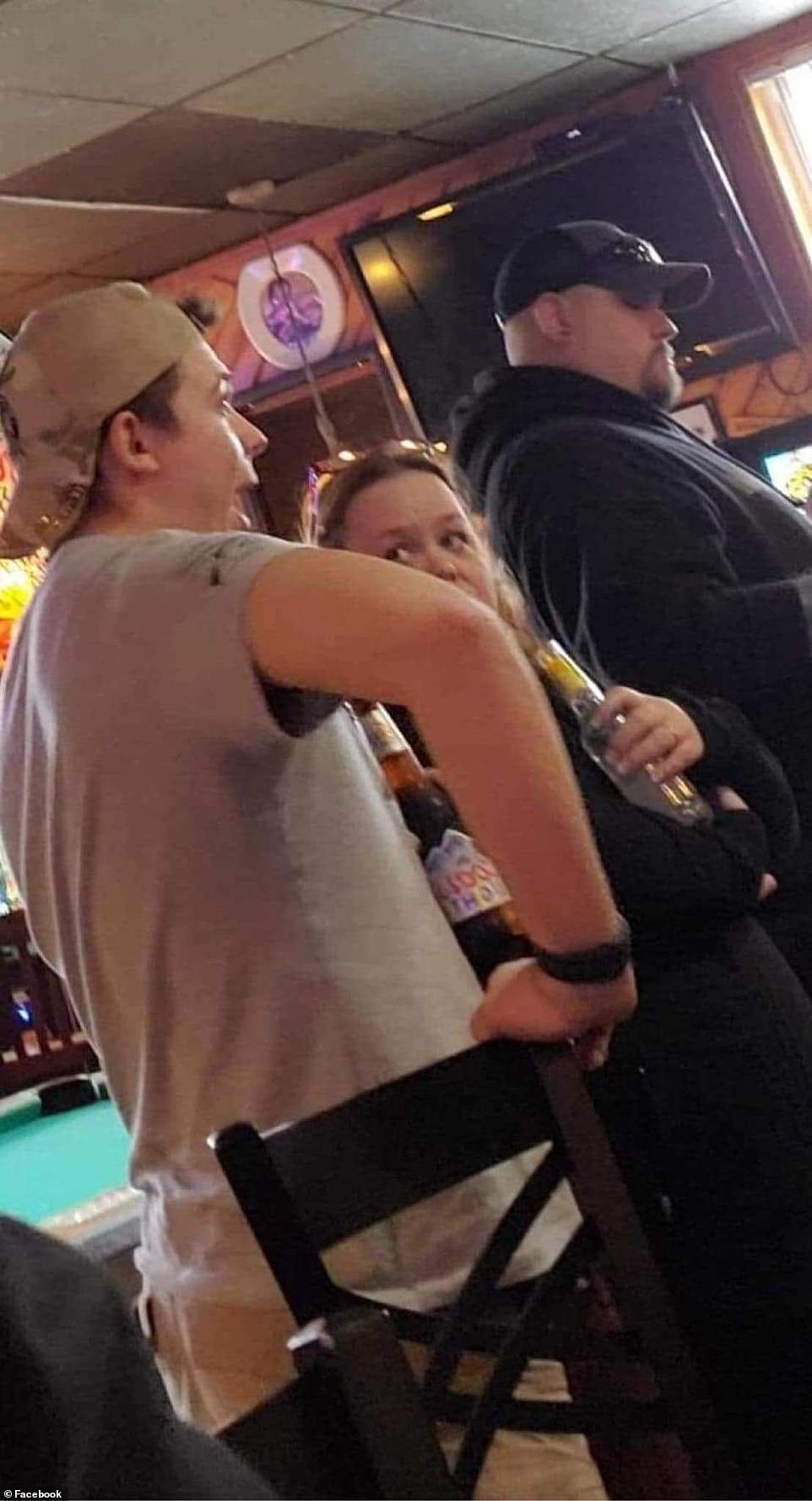 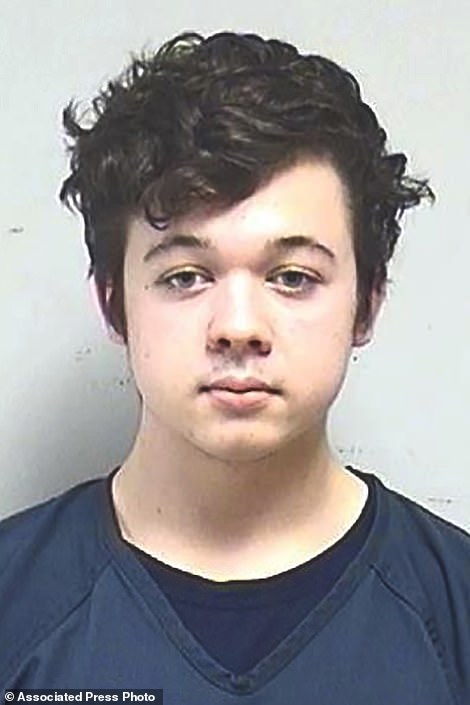 Kyle Rittenhouse is charged in the slayings of two people during street protests in Kenosha, Wisconsin. He has pleaded not guilty

The teenager is currently free on a $2million bond while he awaits his trial.

He was with armed militia members in August when he shot and killed Joseph Rosenbaum and Anthony Huber, and wounded Gaige Grosskreutz.

He was arrested the following day at his home in Illinois.

His lawyers said the teen acted in self-defense when he was confronted by Black Lives Matter protesters who were demonstrating over the police shooting of Jacob Blake.

The protests were decrying the police shooting of black man Jacob Blake, who was shot seven times in the back and left paralyzed on August 23.

Last week, Rittenhouse pleaded not guilty to the charges in a brief hearing conducted by teleconference.

Rittenhouse has argued he opened fire in self-defense, claiming he was protecting local businesses from the raucous protests. 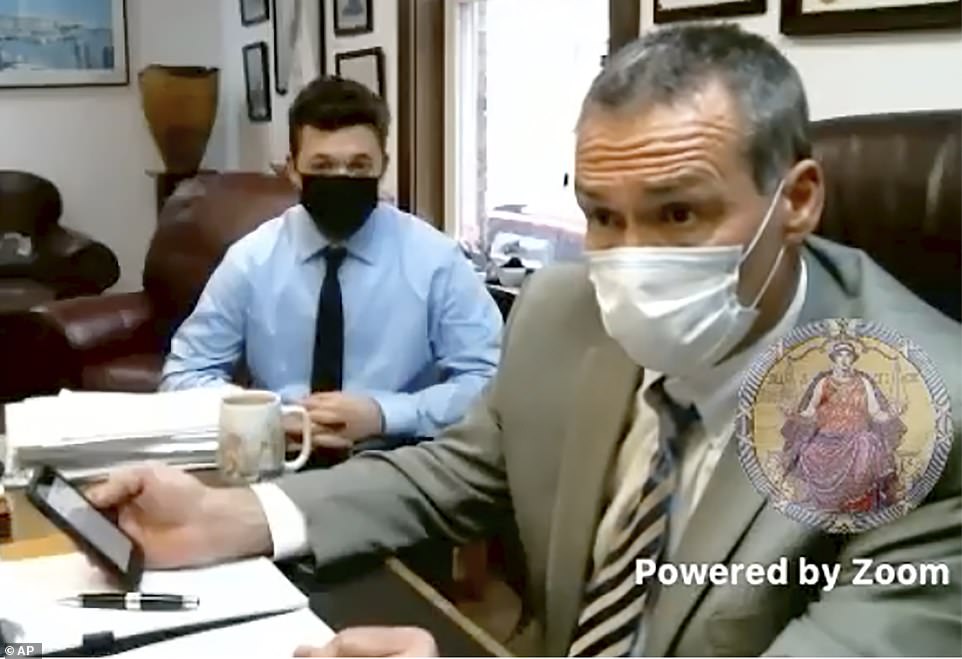 Kyle Rittenhouse, 18, pleaded not guilty to charges including intentional homicide on Tuesday in a brief hearing conducted by teleconference. Rittenhouse pictured in blue with his lawyer Mark Richard’s from his lawyer’s office 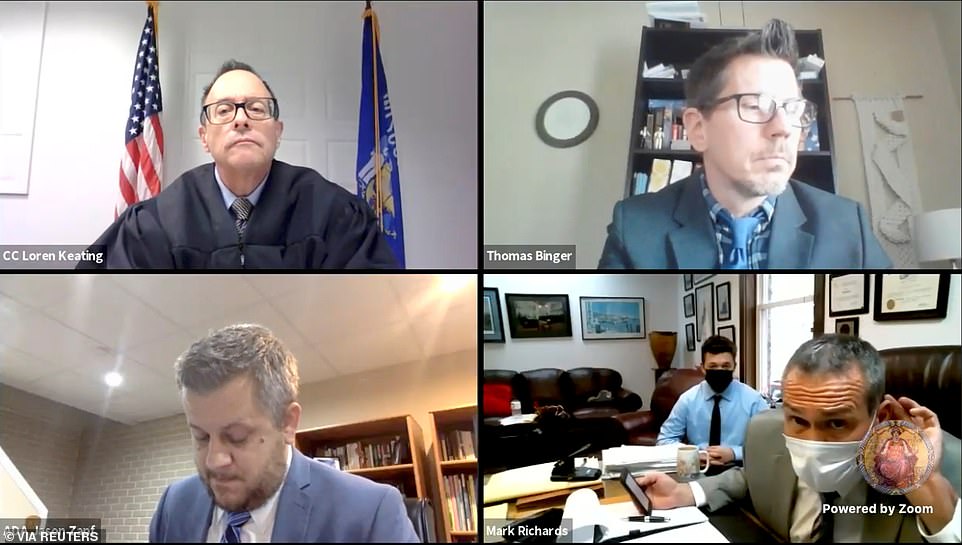 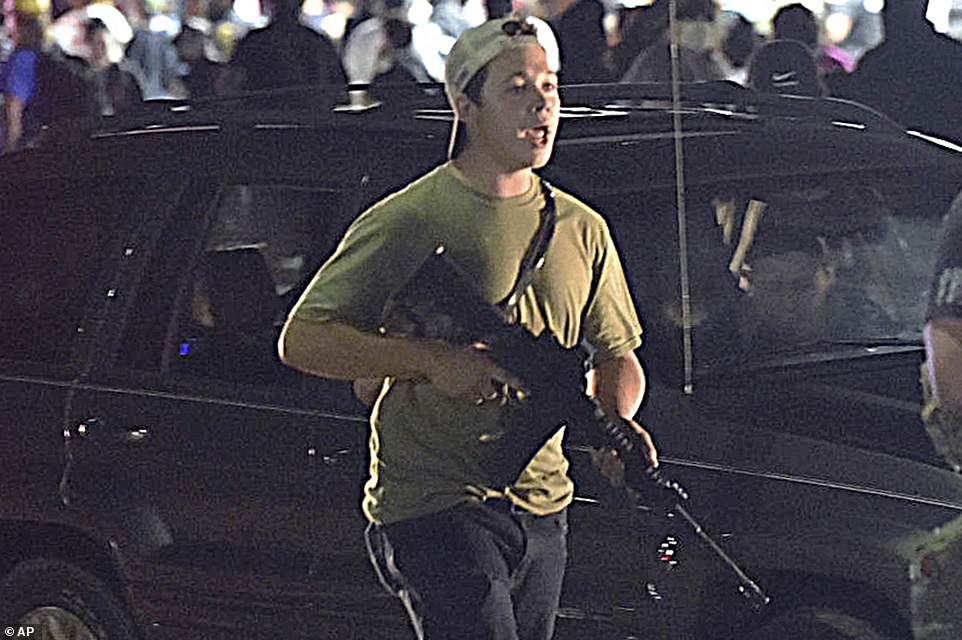 Rittenhouse opened fire with an assault-style rifle during protests on August 25, killing Joseph Rosenbaum and Anthony Huber and wounding Gaige Grosskreutz. Pictured above carrying the rifle in Kenosha during the night of the shooting

During the Tuesday hearing when Kenosha County Circuit Court Commissioner Loren Keating asked Rittenhouse if he understood that the previously imposed conditions of bond and bail ‘remain in full force and effect,’ he replied, ‘Yes sir.’

The trial is slated to start on March 29.

Conservatives have rallied around Rittenhouse, describing him as a patriot who took up arms to protect people and property, and raised enough money to make his $2million cash bail, allowing him to walk out of jail on November 2.

Others see him as a domestic terrorist whose presence with a rifle incited protesters. Rittenhouse was 17 at the time of the shootings. 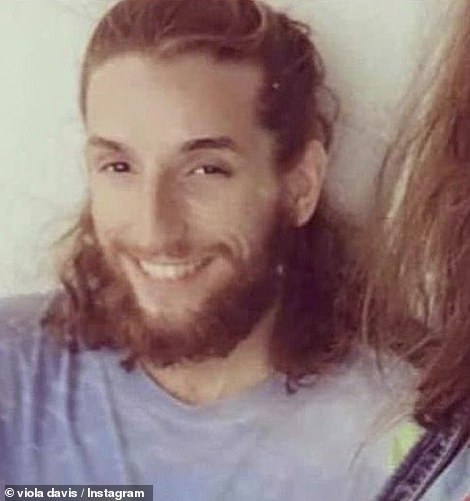 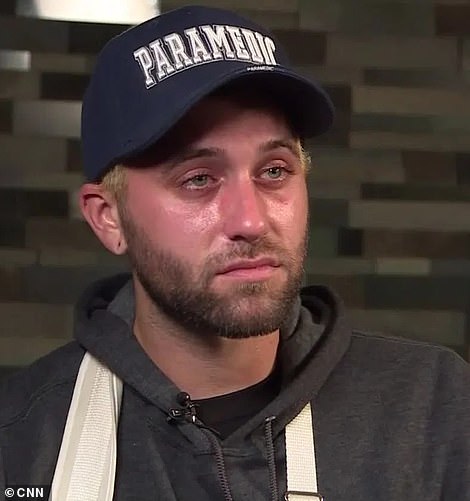 Victims: In the August 25 shooting Rittenhouse fatally shot Anthony Huber (left) and shot and wounded Gaig Grosskruetz (right).  The family of Anthony Huber is suing the city of Kenosha, Wisconsin for $10 million. Gaige Grosskruetz has similarly filed a suit seeking $10 million in compensation 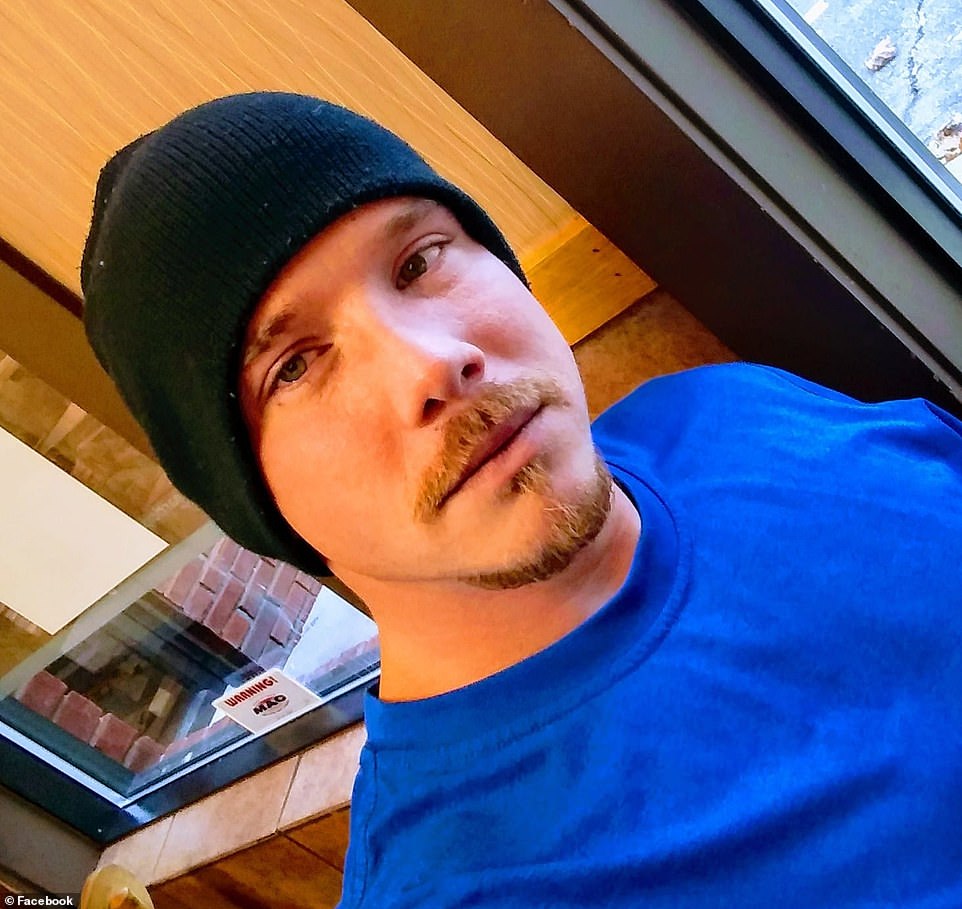 Joseph Rosenbaum, 36, was also shot and killed by Rittenhouse. Rosenbaum’s family have not yet filed a suit against the city of Kenosha

The family of victim Anthony Huber is suing the city of Kenosha for $10million. Protester Gaige Grosskruetz, who was injured, has similarly filed a suit seeking $10million in compensation.

In Kenosha, a city of 100,000 near the Wisconsin-Illinois border, protests led to an estimated $50 million in damage.

Some people answered a call on social media to travel to Kenosha in the wake of the Blake shooting. These included Rittenhouse who traveled from his home in Antioch, Illinois, in a bid to ‘protect’ local businesses.. 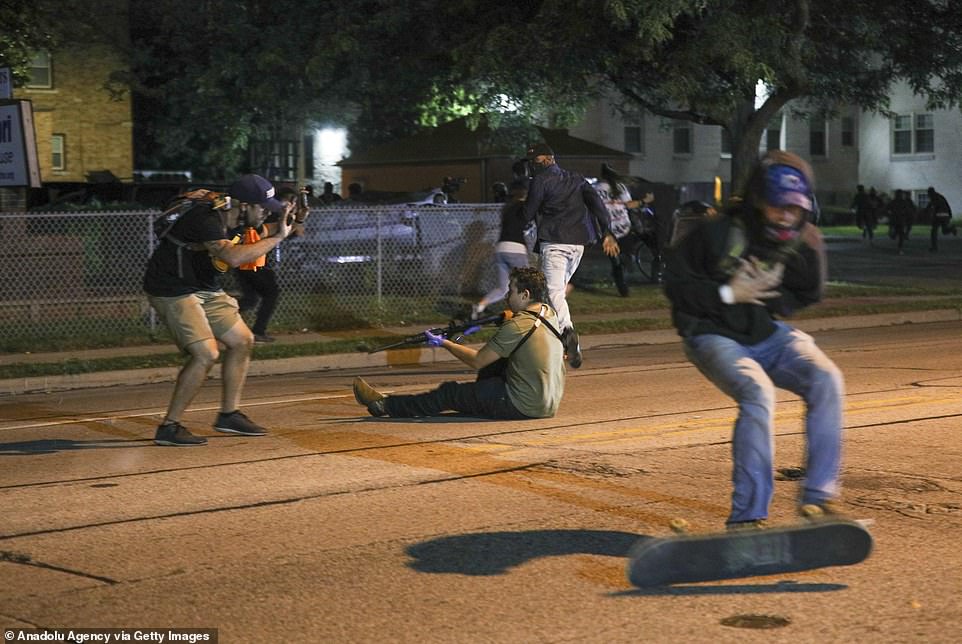 Rittenhouse says he acted in self-defense as the protests descended into violence, but he is set to stand trial for murder later this year. He is pictured shooting at Grosskreutz

The Proud Boy anthem that is actually a song from ALADDIN

The Proud Boys have co-opted a cult-classic song from Aladdin as their own anthem, not even changing the words to the not-well known song. ‘Proud of Your Boy’ is a song sung by Aladdin about his mother and became a well known song thanks to the Broadway musical.

Proud Boy founder Gavin McInnes adopted the song after hearing it at his daughter’s recital in 2015, feeling that it represented the effeminization of men today.

Lyrics to the song are as follows:

I’ll make you proud of your boy

Believe me, bad as I’ve been, Ma

You’re in for a pleasant surprise

So say I’m slow for my age

A late bloomer, Okay, I agree

That I’ve been one rotten kid

Some son, some pride and some joy

But I’ll get over these lousin’ up

Messin’ up, screwin’ up times

Make good and finally make you

Tell me that I’ve been a louse and loafer

You won’t get a fight here, no ma’am

Say I’m a goldbrick, a good-off, no good

But that couldn’t be all that I am

Water flows under the bridge

Let it pass, let it go

There’s no good reason that you should believe me

Not yet, I know, but

I’ll make you proud of your boy

Though I can’t make myself taller

Or smarter or handsome or wise

Since I wasn’t born perfect like Dad or you

Mom, I will try to

Try hard to make you

Loading...
Newer Post
Jacob Blake says he was ready to surrender before being shot
Older Post
Betty White is turning 99: Her top tips for living a long and healthy life

Britain's youngest terrorist will be freed from prison  0