JLo and Ben Affleck were ‘excited’ – but asked public not to take pics at wedding, according to couple who wed at chapel

A LOVED-up couple looking to cement their bond in an impromptu late-night Las Vegas wedding ceremony said they were stunned to see Ben Affleck and Jennifer Lopez standing in line behind them.

Airika Ruiz, 31, and Demetrius Visaya, 25, traveled to Sin City from Victorville, California, late on Saturday evening after deciding to get married on the spur of the moment.

As chance would have it Affleck, who previously portrayed Batman on the big screen, had also decided to wed JLo on the same night[/caption]

The couple told The US Sun in an exclusive interview how they had been celebrating their son’s second birthday – with a Batman-themed party – when they spontaneously decided to tie the knot.

Airika and Demetrius, along with around 25 other family members, then all piled into five different cars and made the 180-mile drive down to Las Vegas where they arrived just after 11pm.

While the rest of their family waited at a nearby budget chapel, Airika and Demetrius headed to the Clark County Marriage Licence Bureau to sort out their paperwork.

The pair were standing in line when Airikia glanced briefly over her shoulder to see a JLo, who was wearing a white dress, standing directly behind them next to a casually-dressed Ben Affleck. 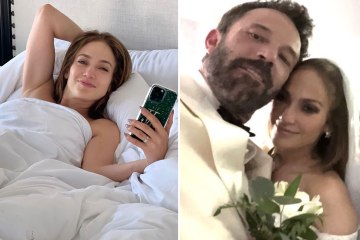 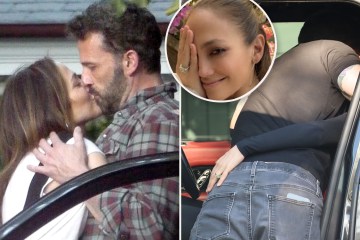 JLo & Ben Affleck have STEAMY make out session after their engagement

“It was crazy,” laughed Demetrius. “I don’t know how to explain it we were both just in shock.

“But I turned to look and they were just literally standing there less than a foot away from us.”

Lopez and Affleck – or Bennifer as the couple is collectively known – were at the license bureau by themselves, without any members of their entourage or security.


Woman shares easy hack to cool your house during the heatwave


My boobs stole the show at my son’s party, trolls say my dress was indecent

FOR LOVE, NO MONEY

Once the shock of the moment subsided, Demetrius decided to strike up a conversation with the A-list duo and asked them for a photograph.

“I asked If I could take a picture and I figured it would be a no just because it’s a private moment, they didn’t have any security, and there was no paparazzi or anything, so they declined,” he said.

“But after 30 seconds or so, while we were still in shock, we kind of settled down a little bit and just started having a conversation with them about our trip and our son’s Batman-themed party earlier that day.”

Demetrius, a self-described Batman fanatic and keen admirer of Affleck’s portrayal of the Caped Crusader, said he was taken aback by how tall the actor was, and how down-to-earth the A-list couple seemed.

Airika similarly added: “They were so nice, just talking to us like normal people and telling us congratulations.

“We told them about the story and they said they were gonna get married as well.

“Ben asked how old our son was … that was the craziest thing about it because our son had a Batman impersonator come to his birthday party, and then before our wedding we’re meeting Ben Affleck who actually played Batman.”

JLo and Affleck were said to have responded, “Oh my god, wow!” at the coincidence, and seemed really happy and excited at the prospect of getting married, according to Airika.

“Ben was definitely more talkative and JLo seemed really sweet – she was quieter but was still talking away with us anyway,” Airika said.

“JLo and I were in our white dresses and Demetrius and Ben weren’t dressed yet … they just seem like really nice, cool people.”

Airika and Demetrius said they feel honored to have shared their special day with the Hollywood pair, calling the moment they shared with Bennifer “priceless”.

They say the meeting also affirms their belief that they were meant to get married that day.

“It’s crazy because if I had stopped to get gas we would’ve missed them … but everything just kind of happened at the right moment,” said Demetrius.

“It was such a good experience and definitely made our wedding feel extra special.”

“We have such a great story to tell our family and our kids forever,” added Airika.

“Usually a Vegas wedding would usually be just a last-minute decision kind of story but this is way better – and way better than the thousands of dollars we could’ve spent on the wedding.

“This is like the coolest experience,” she added, “and made it better than any wedding we could’ve had.”

Airika and Demetrius were among the very first to know of Affleck and JLo’s plans to get married.

After securing their license, the actor pair headed to the iconic A Little White Wedding Chapel to exchange their nuptials in an intimate ceremony – complete with a pink convertible Cadillac and a “Tunnel of Love” drive-thru.

The couple announced their engagement in April having rekindled their romance last year.

Affleck, 49, and Lopez, 52, were previously engaged almost two decades ago before splitting in 2004.

News of their wedding was confirmed by JLo in her newsletter, who wrote: “We did it. Love is beautiful. Love is kind. And it turns out love is patient. Twenty years patient.”

She included a photo of them laughing together, showing the Jenny from the Block singer holding a bouquet and wearing a white dress and veil.

In her newsletter, JLo said the modest ceremony was “exactly” what they wanted, and even made a reference to Airika and Demetrius.

“Last night we flew to Vegas, stood in line for a license with four other couples, all making the same journey to the wedding capital of the world,” she wrote.

“Behind us, two men held hands and held each other. In front of us a young couple who made the three-hour drive from Victorville on their daughter’s second birthday – all of us wanting the same thing – for the world to recognize us as partners and to declare our love to the world through the ancient and nearly universal symbol of marriage.”

Airika told The US Sun that she was glad to have played a small part in the couple’s day – and didn’t mind that JLo mistook her son for a girl.

“I thought it was so cool they ended up together after all,” she said.

“It’s funny because JLo wrote in the article that it was our daughter, but it was our son,” Airika added with a laugh.

“He has long hair so I can see the mistake – we found that funny.

“To even be mentioned in her letter was just so amazing.”

JLo and Ben Affleck first got together in 2002 after meeting on the set of the romantic comedy, Gigli.

They became engaged shortly after, and had planned to wed in September 2003 but postponed the ceremony days before.

In a joint statement at the time, the couple wrote: “Due to the excessive media attention surrounding our wedding, we have decided to postpone the date.

“When we found ourselves seriously contemplating hiring three separate ‘decoy brides’ at three different locations, we realized that something was awry.

Months later, in January 2004, the couple announced that Bennifer was officially over.

Following their breakup, both Lopez and Affleck pursued other relationships and started families of their own.

JLo married Marc Anthony months after her split from Affleck whom she later divorced in 2004. They shared two children, twins Max and Emme.

Affleck, meanwhile, was married to Jennifer Garner from 2005 to 2018, and they have three kids together, daughters Violet and Seraphina, and son Samuel.

After both suffering high-profile breakups in 2021, Lopez and Affleck were spotted together in April last year, fuelling rumors of a rekindling.

Rose care: Deadhead roses at a specific 'angle' to avoid the plant 'rotting' 0