Jessica Hayes has spoken of how she feared for her life while suffering a heartbreaking miscarriage last year.The Love Island contestant, 27, revea

Louise Redknapp shows off her designer style as she rocks a £1,100 denim Balenciaga jacket
Star Trek: William Shatner is creating an AI version of himself to 'preserve his memory and legacy'
Indian girl is 'held as a slave for eight years in a Melbourne home'


Jessica Hayes has spoken of how she feared for her life while suffering a heartbreaking miscarriage last year.

The Love Island contestant, 27, revealed the heartbreaking news via her Instagram page in December, explaining she and fiancé Dan Lawry had named their son Teddy.

Jess, who lost her baby at 19 weeks, told how she was ‘drowning in grief’ and wrote ‘I’m so sorry I couldn’t keep you safe for a little while longer’. 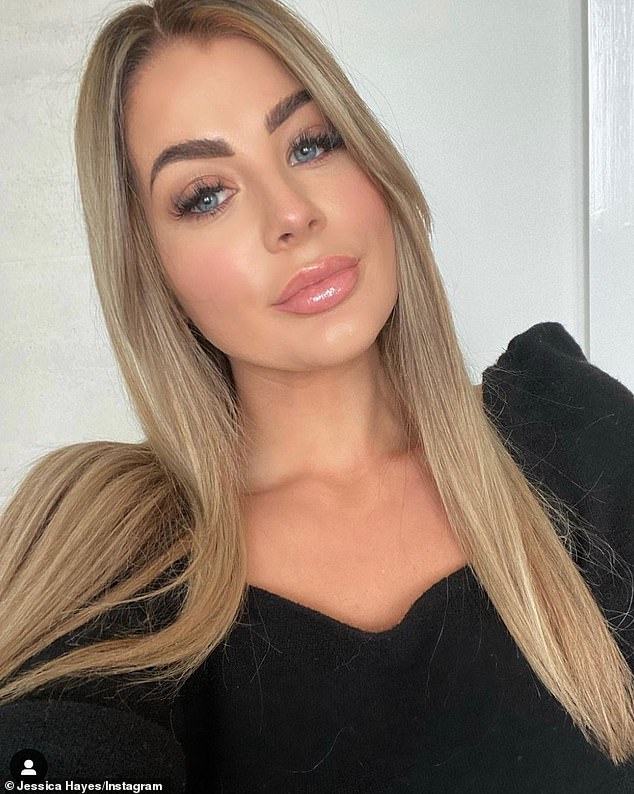 Tragic: Jessica Hayes has spoken of how she feared for her life while suffering a heartbreaking miscarriage last year

The reality personality has since revealed she was worried her own life was in danger while going through the unbearable ordeal, admitting that the past couple of months have been the ‘hardest of her life’.

Jess, who named the child Teddy, told Ok!: ‘Although I had Dan with me, I really wanted my mum. So she swapped over and was there with me during the labour.

‘It’s not that I didn’t want Dan but I could only pick one person and I felt like I needed my mum. They also didn’t know if I was going to be OK as you can get really sick and I lost a lot of blood. 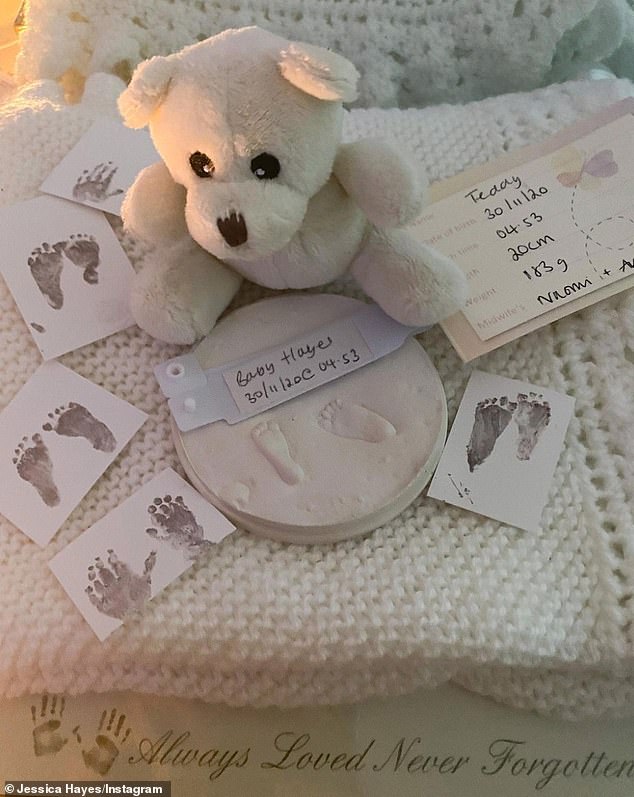 Heartbreaking: The Love Island contestant, 27, revealed the heartbreaking news via her Instagram page in December, explaining she and fiancé Dan Lawry had named their son Teddy

‘My life was in danger as well as the baby’s.’

Jess also revealed that she went to say goodbye to Teddy with Dan in the hospital’s bereavement suite because she felt she ‘owed’ it to him to see him.

She added that she feels like he is just as much her son as her first born Presley, 19 months, who she admitted has been her reason to carry on.

Jessica first shared the tragic news alongside a picture of her baby’s hand and footprints, a knitted blanket and a teddy bear. 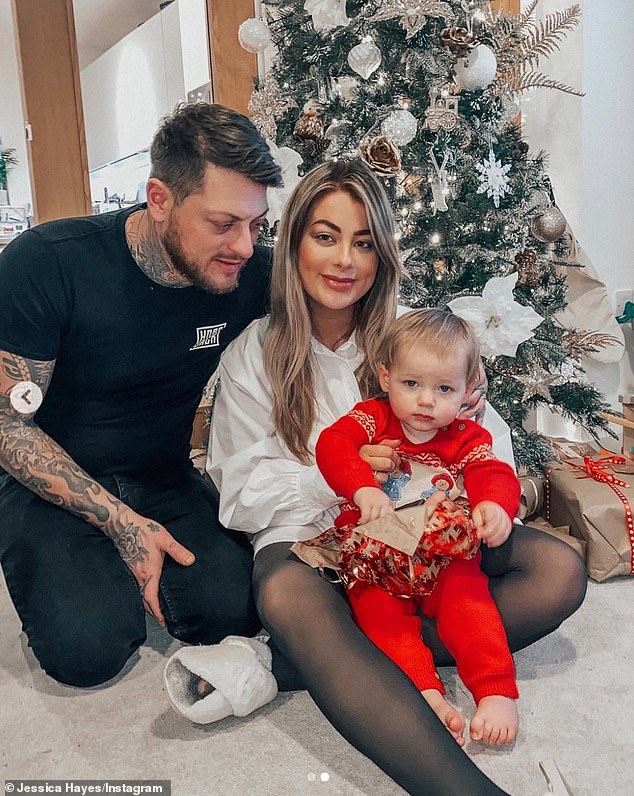 Family: She added that she feels like he is just as much her son as her first born Presley (pictured), 19 months, who she admitted has been her reason to carry on

‘I’m sorry we had to say goodbye this way it wasn’t supposed to be like this. The pain is unbearable and I feel like I’m drowning in grief.

‘My mind spinning thinking of all the what ifs and questions of who you would of grown up to be. When will I wake up From this awful nightmare?

‘I look at the clock and count the hours of how old you are time is moving but your not here your not getting older it’s not fair. No first times, smiles or laughter.’

The mother-of-one – who welcomed first son Presley James in June 2019 – continued: ‘Why did this happen to us? I wish I could of stared at your beautiful face a little while longer and held you in my arms forever. 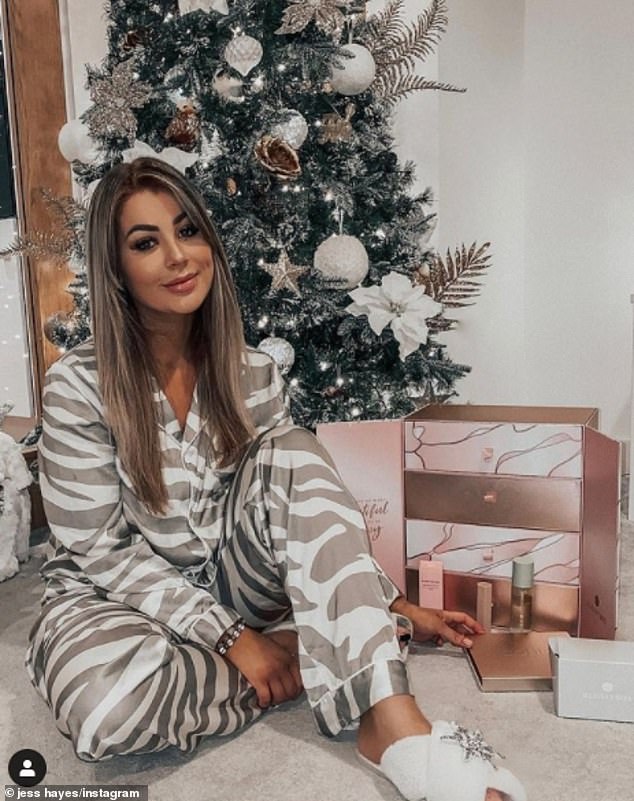 Sad: Jessica first shared the tragic news alongside a picture of her baby’s hand and footprints, a knitted blanket and a teddy bear 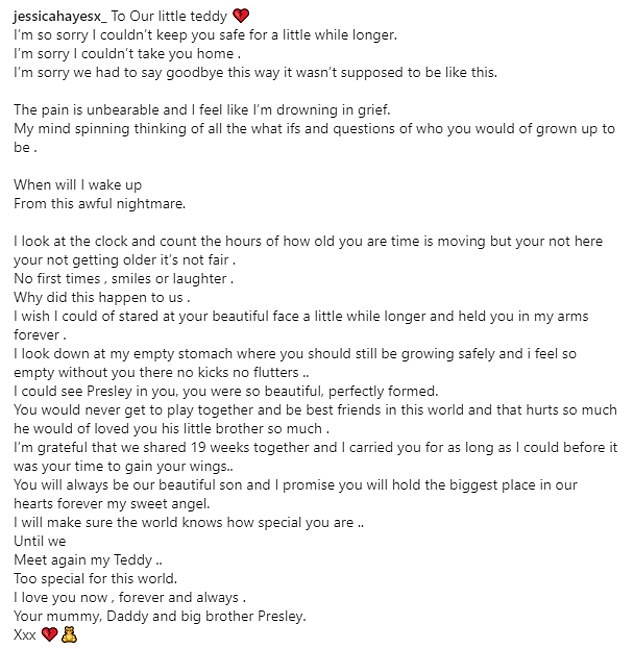 Grief: Jess shared some moving words alongside her heartbreaking announcement

‘I look down at my empty stomach where you should still be growing safely and I feel so empty without you there no kicks no flutters.

‘I could see Presley in you, you were so beautiful, perfectly formed. You would never get to play together and be best friends in this world and that hurts so much he would of loved you his little brother so much.

‘I’m grateful that we shared 19 weeks together and I carried you for as long as I could before it was your time to gain your wings.

‘You will always be our beautiful son and I promise you will hold the biggest place in our hearts forever my sweet angel. I will make sure the world knows how special you are.

‘Until we meet again my Teddy.. Too special for this world. I love you now, forever and always . Your mummy, Daddy and big brother Presley.’ 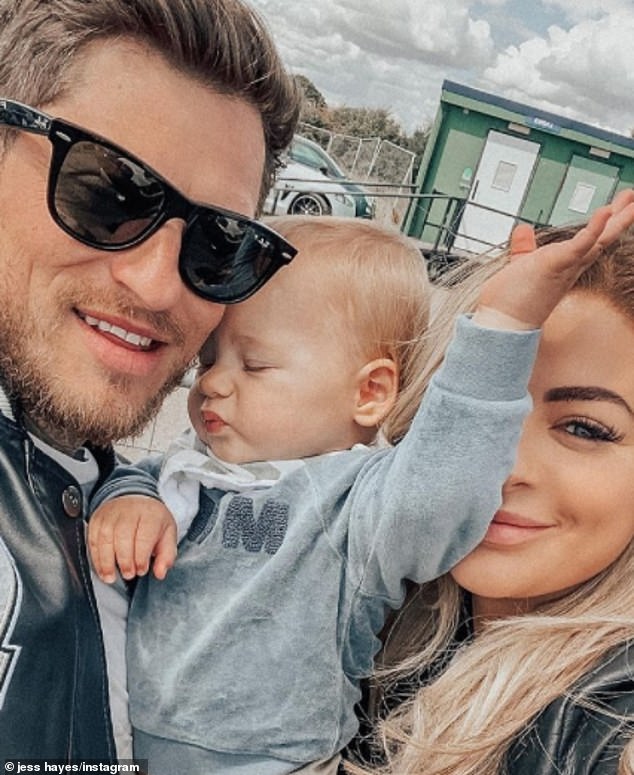 Family: Jess pictured with her fiancé Dan and son Presley (pictured in August)

Tragically, Jess had only revealed that she and Dan – who announced their engagement in August 2018 – were expecting their second child the week before.

She won Love Island in 2015 alongside Max Morley in the first season of the rebooted show, but they parted ways just 40 days after the final aired.

Afterwards, Jess didn’t minced her words about her ex, saying that she ‘would never go near him’ again because he’s ‘vile’.

The Sands National Helpline provides a safe, confidential place for anyone who has been affected by the death of a baby 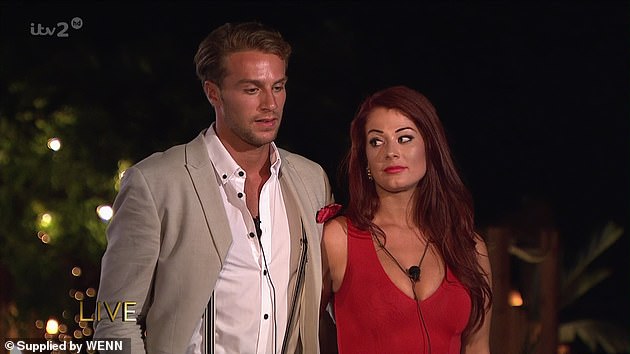 A look back: Jess is known for being the first-ever winner of Love Island

Gordon Ramsay reveals he had to cancel 22,000 restaurant bookings before lockdown 0