She has a killer body honed by years of dancing and regular workouts.And Jennifer Lopez sent temperatures soaring as she showcased her fit physique


She has a killer body honed by years of dancing and regular workouts.

And Jennifer Lopez sent temperatures soaring as she showcased her fit physique on the beaches of Turks and Caicos.

The pop star, 51, was a sight to behold as she sauntered around the tropical paradise in the company of her fiance, Alex Rodriguez, last week.

Making a splash! Jennifer Lopez sent temperatures soaring as she showcased her fit physique on the beaches of Turks and Caicos during a recent beach day at the tropical paradise 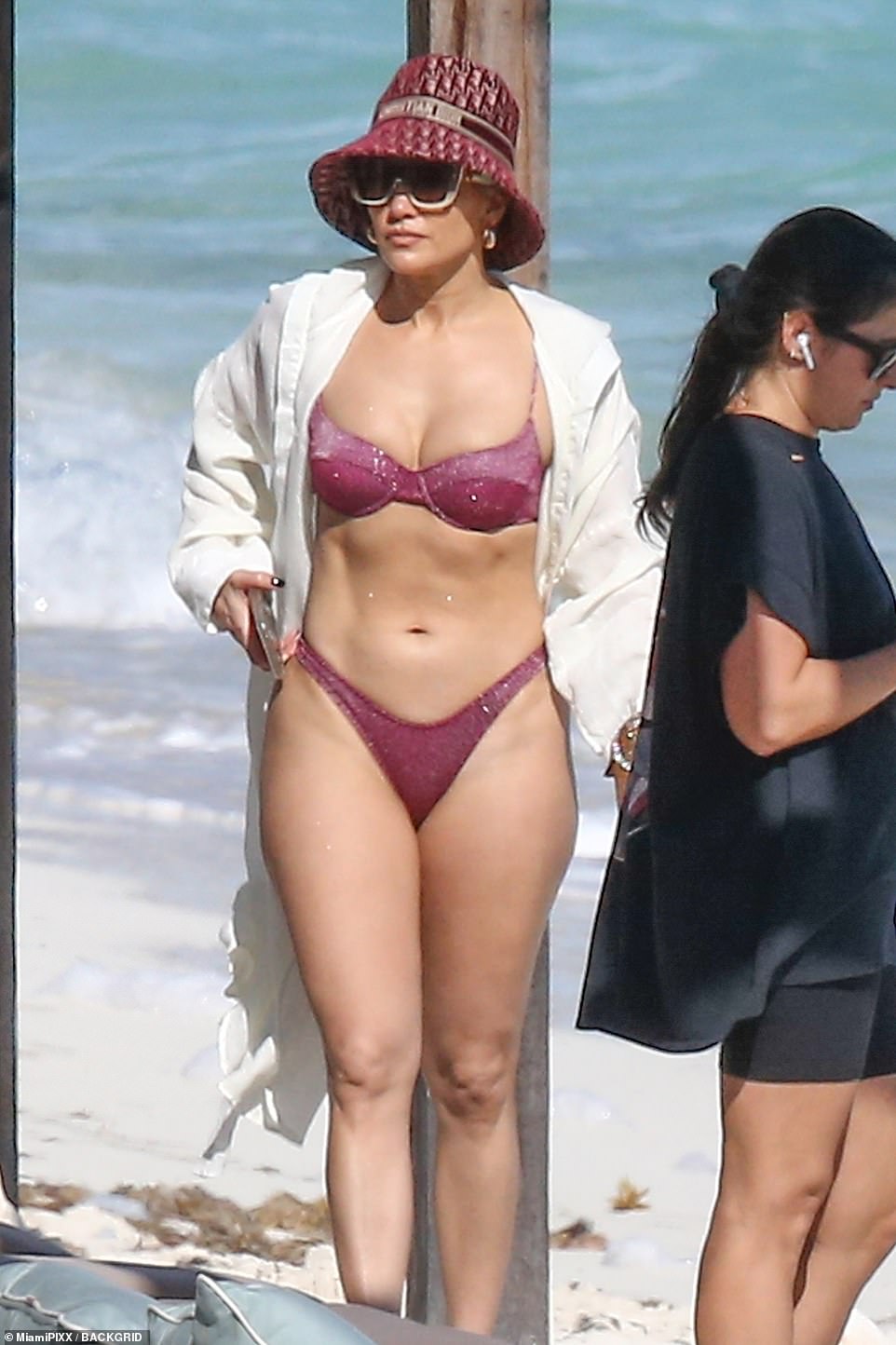 Working it: All eyes were on the pop star and her incredible body

Jennifer looked absolutely breathtaking basking in the sunshine in a sparkling, maroon two piece that put her fab figure on full display.

The superstar had an air of confidence to her as she strutted out of the water and towards dry land.

JLo was adequately protected from the sunshine with a coordinating Christian Dior bucket hat and pair of sunglasses propped upon her face.

As if that wasn’t glamorous enough, she upped the style factor with a gorgeous pair of gold hoop earrings.

Unfortunately, the star suffered a fashion faux pas as she had forgotten to snip off the tag to her bikini.

The black tag was visible as it dangled off the back of JLo’s bikini top. 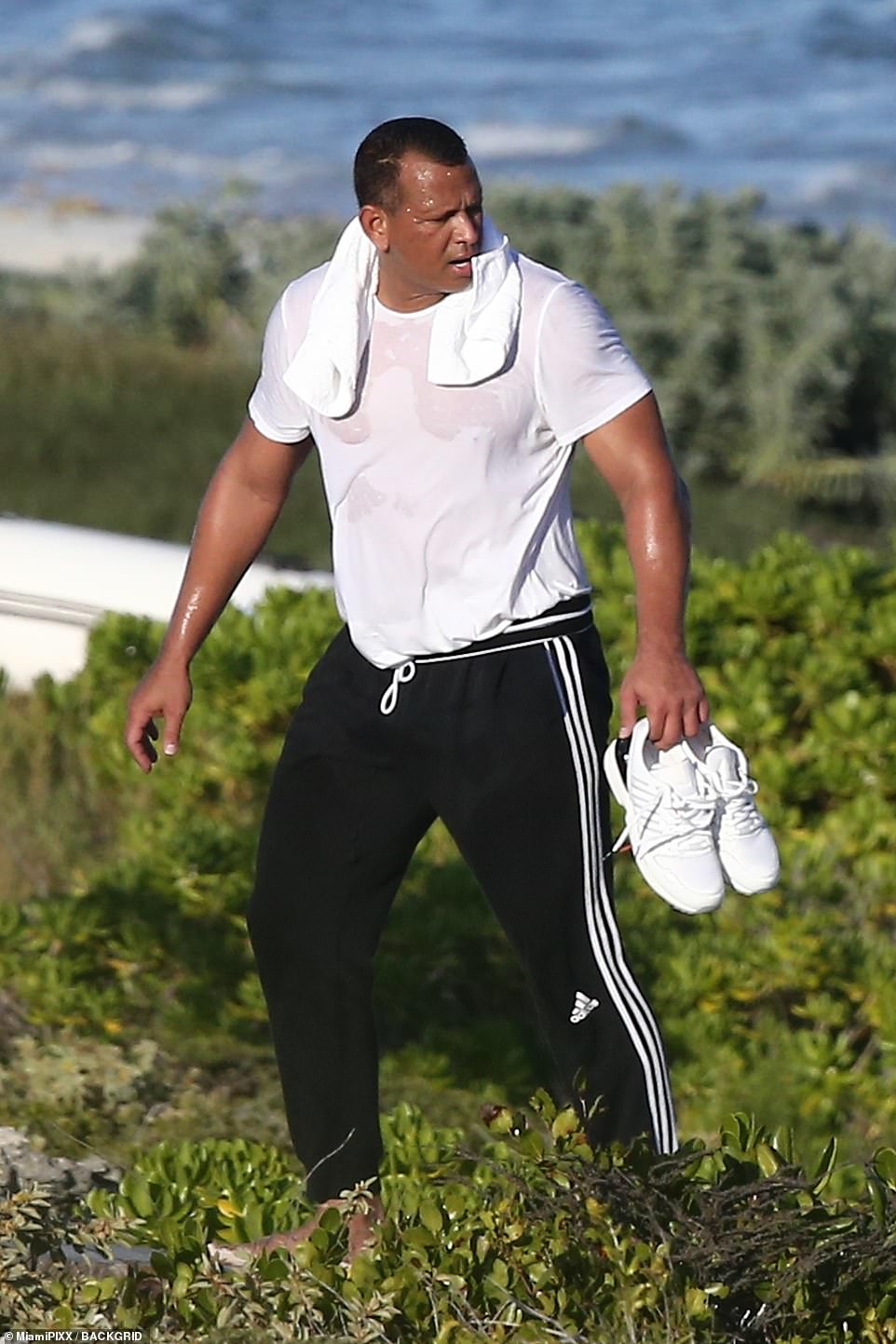 She has company! Alex Rodriguez was also spotted trekking barefoot through the lush beachside 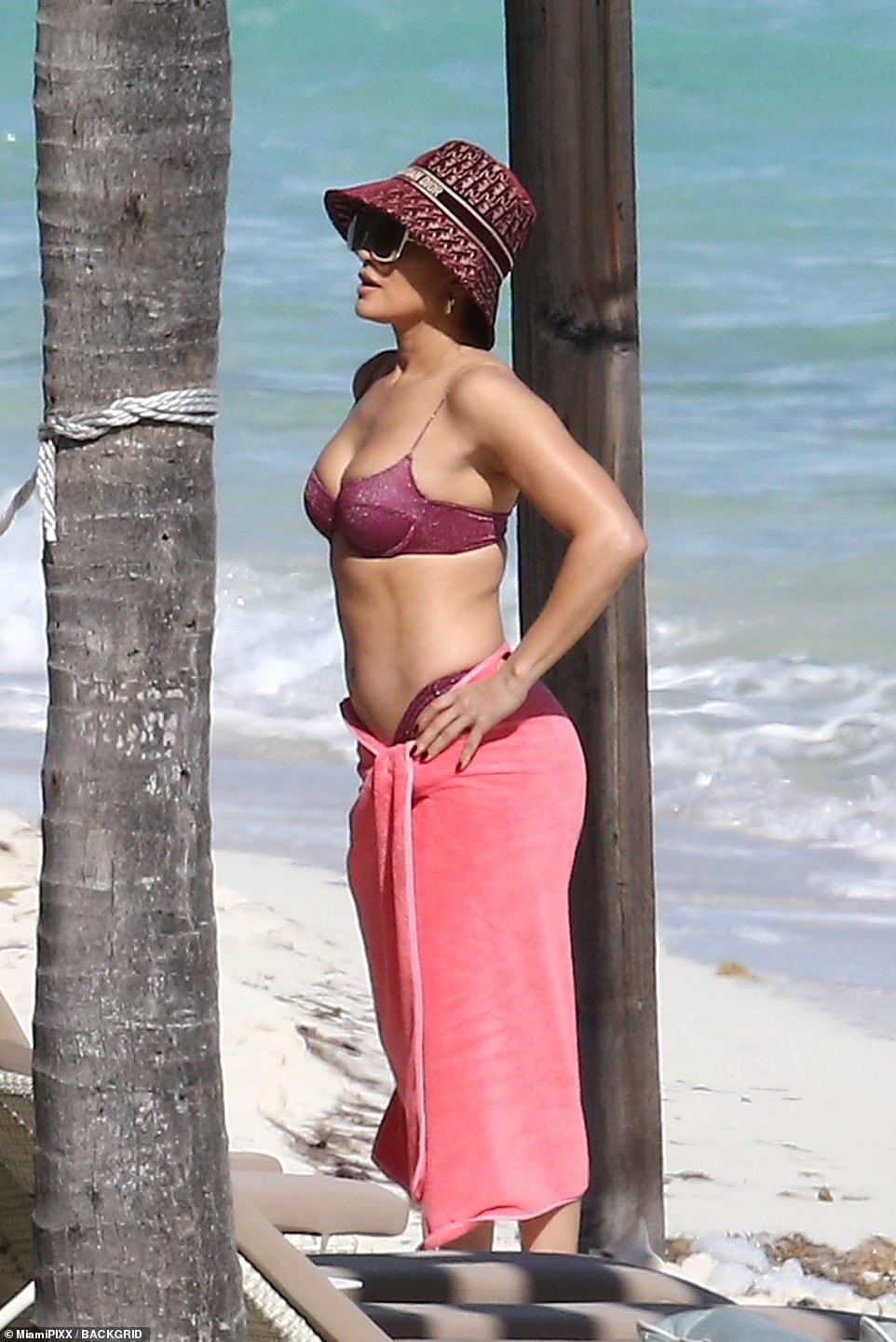 Va va voom: The Maid In Manhattan actress dried off with a pink towel 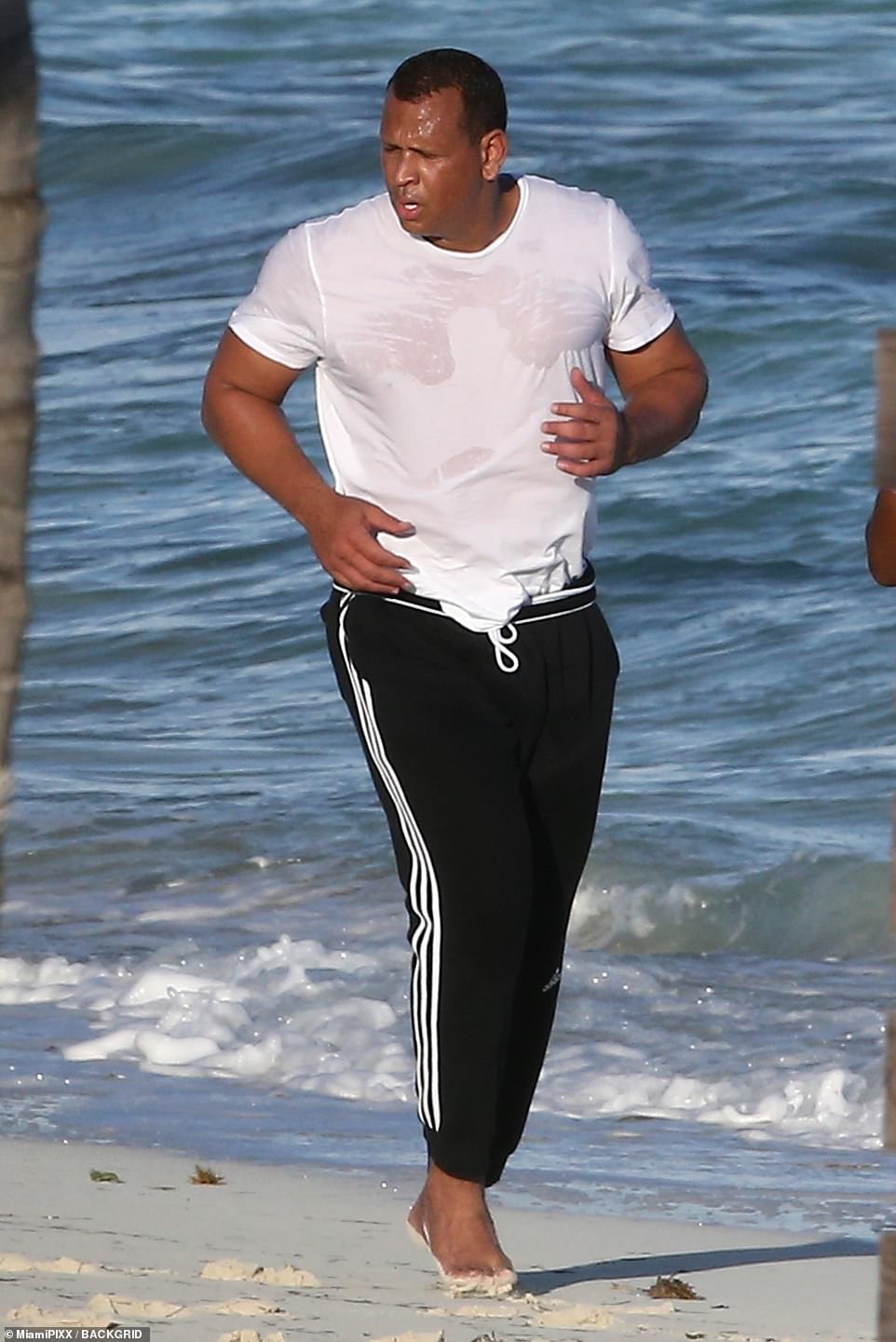 Making a run for it: The former baseball pro jogged gently on the beach

JLo was seen briefly splashing around the waters, testing out the temperatures of the picturesque sea but never going further than knee-deep into the ocean.

After her revitalizing dip, she dried off her body with a soft pink towel.

ARod, meanwhile, was spotted close by fully clothed with a white T-shirt and black track pants.

The former baseball star trekked barefoot through the lush seaside with his sneakers in hand. 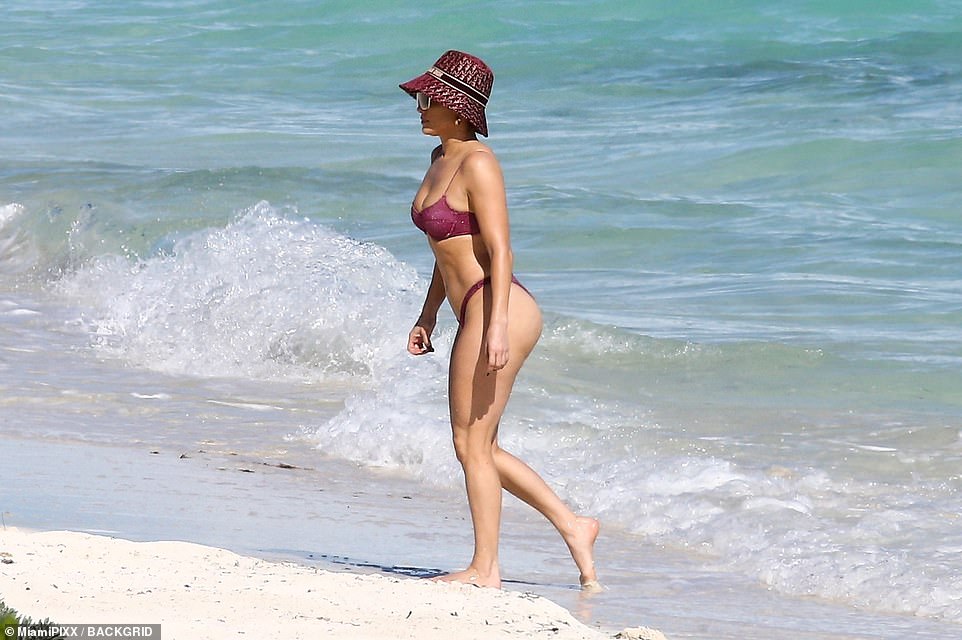 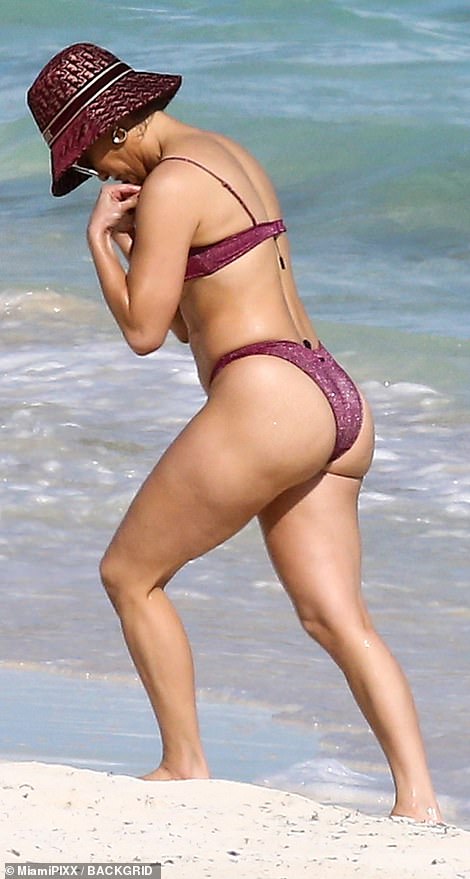 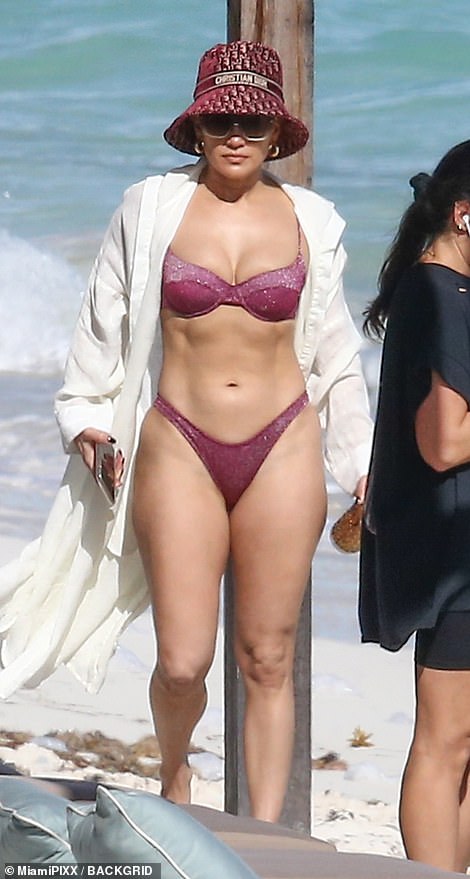 Forget something? JLo forgot to cut off the tag to her bikini, which dangled off the top

Making waves: The singer ventured into the shallow end of the water, where her tag was once again in view 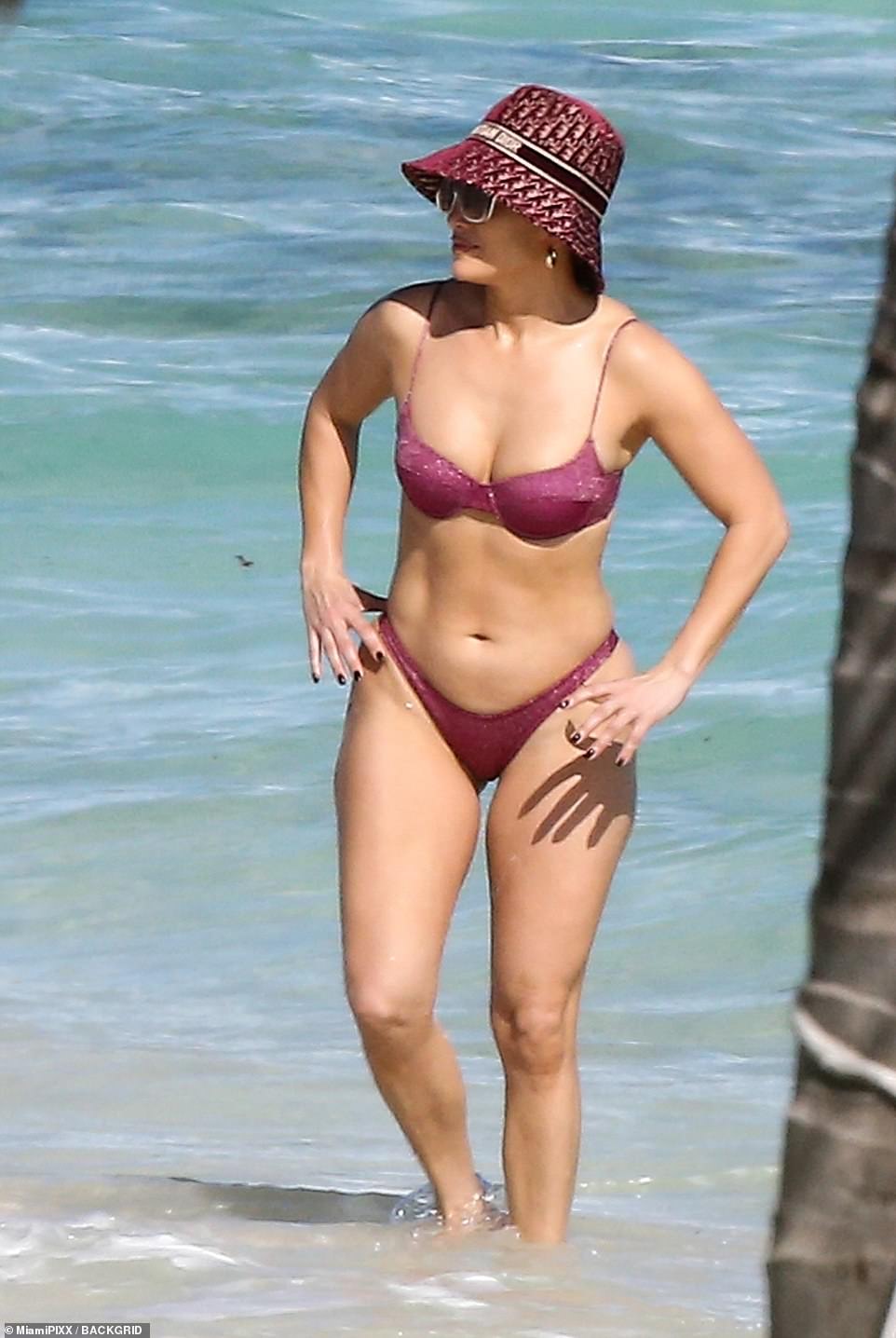 Leggy lady: Lopez showcased her fantastic legs as she strode through the water

The star looked fresh from a dip too, with his wet T-shirt clinging to his body and a small towel wrapped around his neck.

Jennifer has been celebrating the first few days of the new year in Turks and Caicos, after kicking off 2021 performing in Times Square on New Years Eve.

After a fun-filled few days in paradise, Jennifer has since returned home to chillier climes.

The star announced her return home as she posted a before-and-after snap comparing her time on the beach to her current reality.

Happy New Year! Jennifer has been celebrating the first few days of the new year in Turks and Caicos, after kicking off 2021 performing in Times Square on New Years Eve 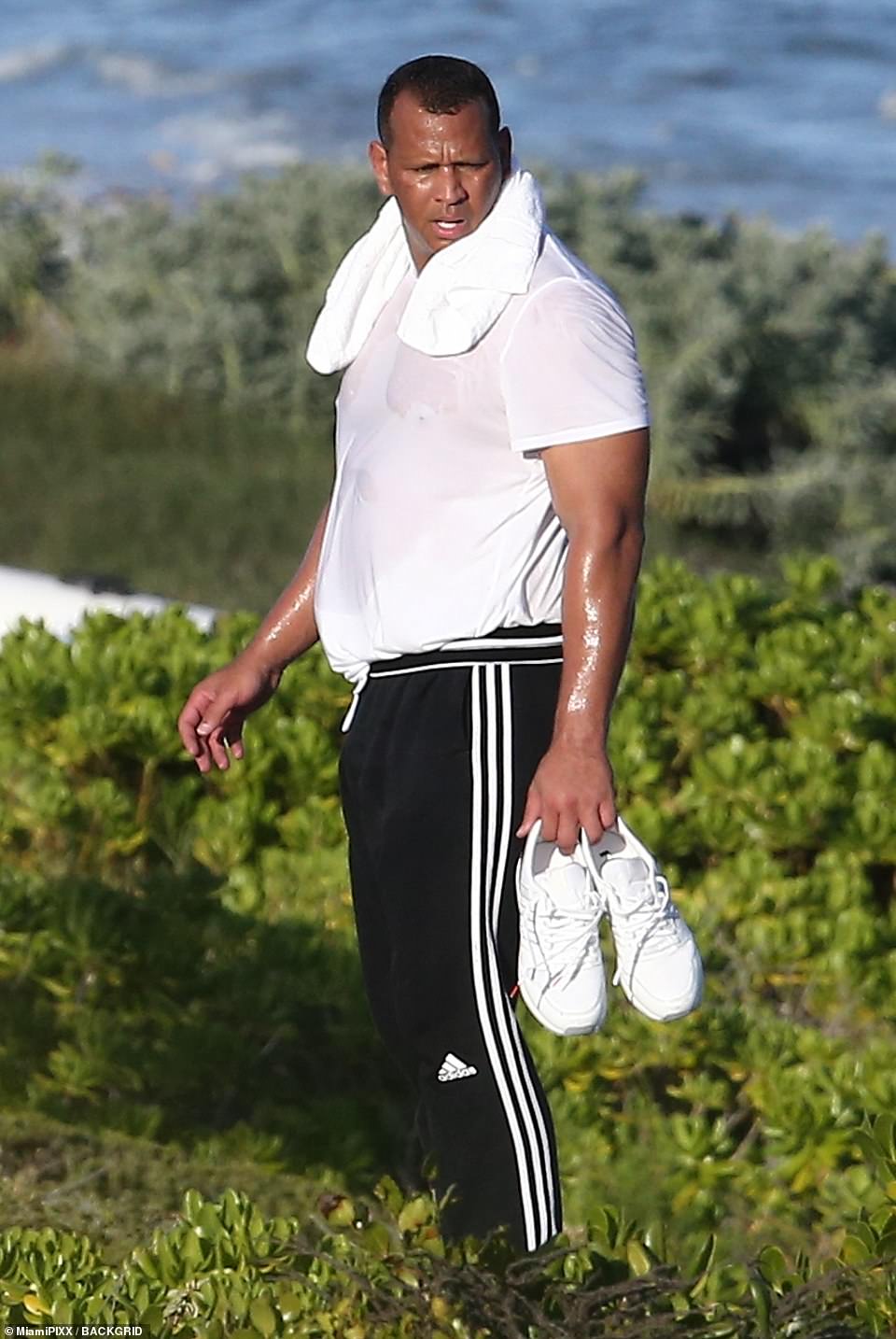 Beach fun: Rodriguez appeared fresh from a dip as well, judging by his wet T-shirt and towel thrown over his neck 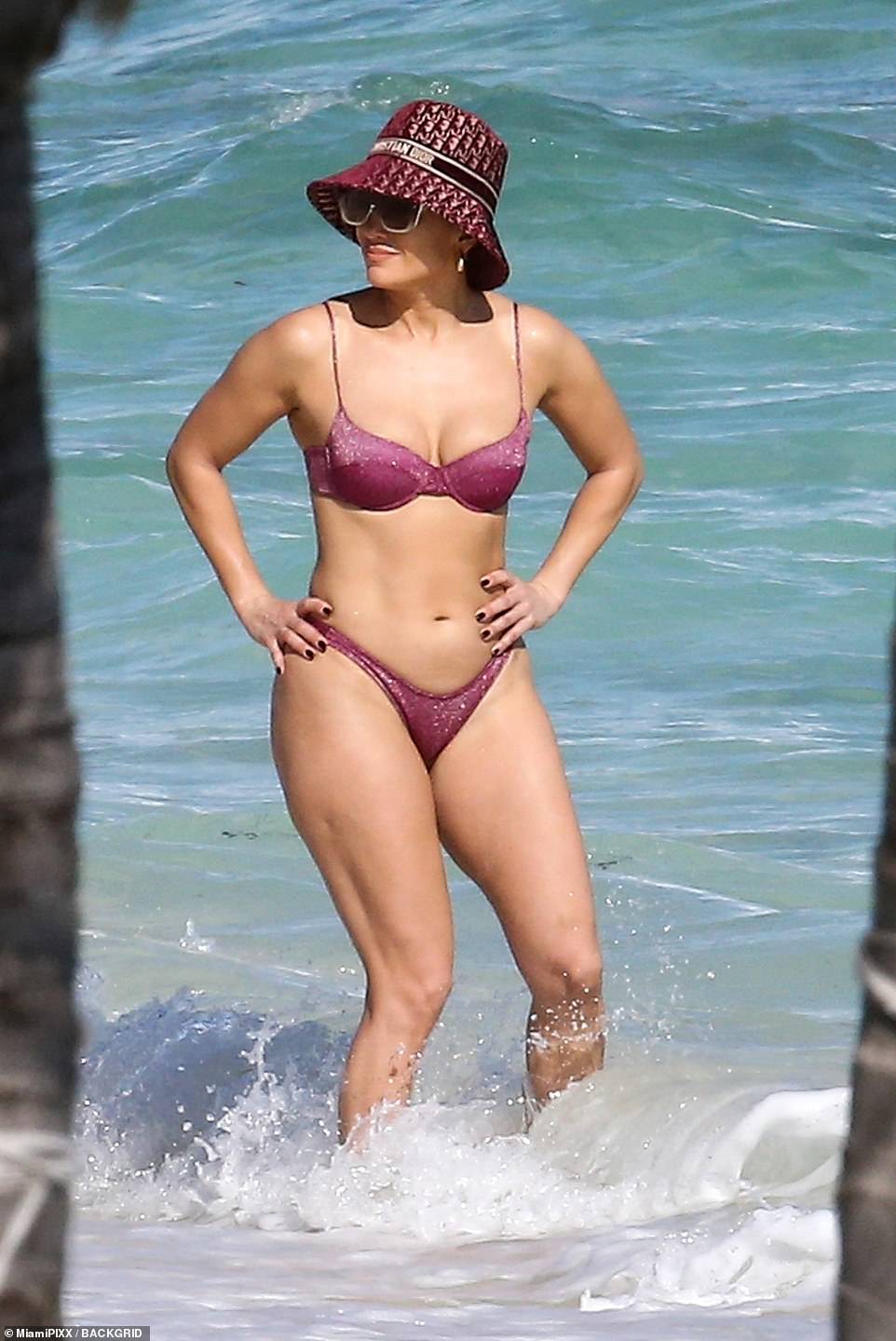 Happy camper: No doubt the pop star was enjoying a fun-filled few days in paradise

In the first snap, JLo stood atop a paddle board in an emerald green bathing suit.

But the second photo captured JLo all bundled up in an floral print North Face jacket.

Jennifer first started dating Alex Rodriguez in 2017, and accepted a proposal from him in 2019.

Jaw-dropping: JLo was a sight to behold as she strutted across the sand in her sparkling bikini 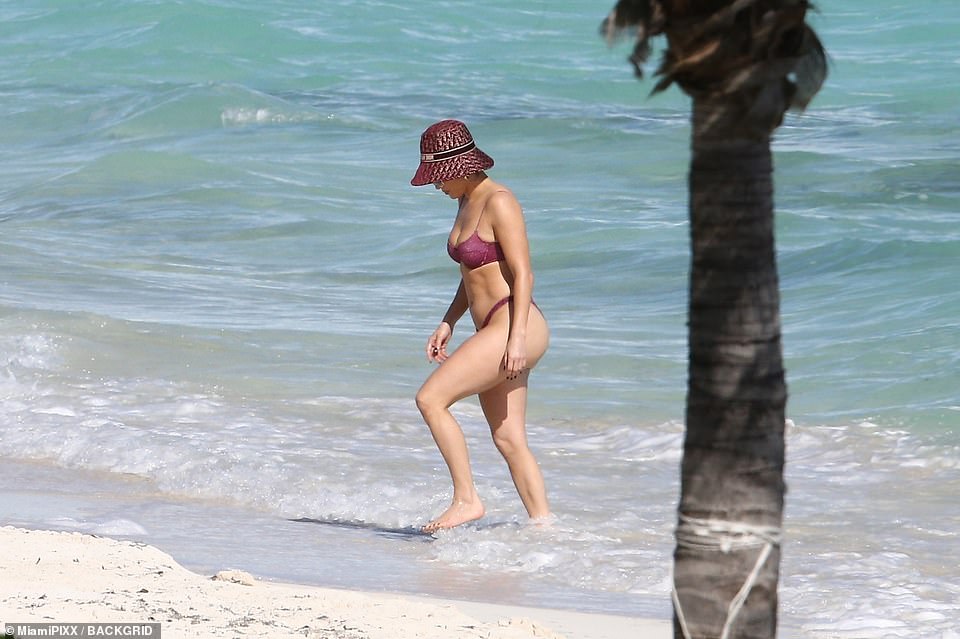 Here she comes! Lopez returned to dry land after a brief splash in the water

The couple planned on tying the knot in 2020, but the nuptials ended up being postponed twice.

‘You know we’ve talked about so many different things cause we had to cancel the wedding last year because of COVID, because of the quarantine, and we actually did it twice, which people don’t know, where we had it in different times – first one canceled and then second one canceled as well – and so I don’t know. We kind of have let it go for a second,’ she recently said on Access Hollywood.

‘I think we just feel like, “Let’s just wait it out.” There’s no rush. We’re good. Everything’s cool. It will happen when the time is right,’ she continued. 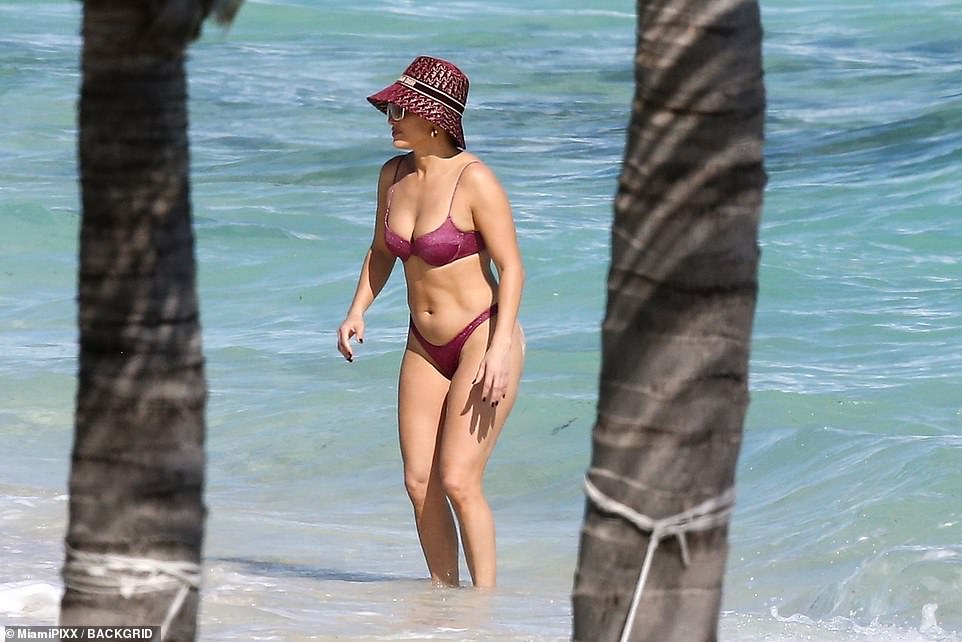 Love life: Jennifer first started dating Alex Rodriguez in 2017, and accepted a proposal from him in 2019 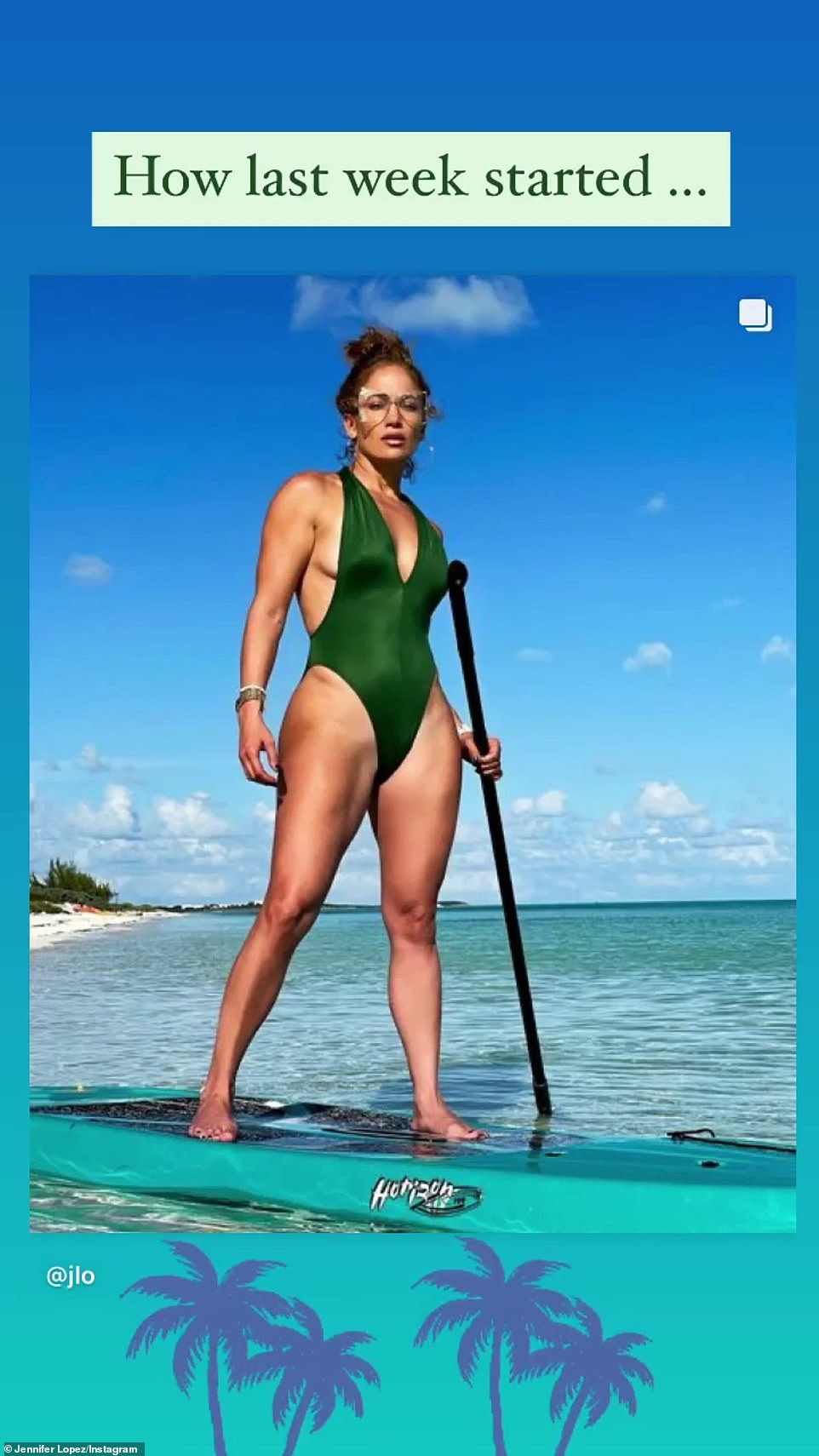 Before and after! Lopez announced she had returned home as she posted a comparison shot to her Instagram 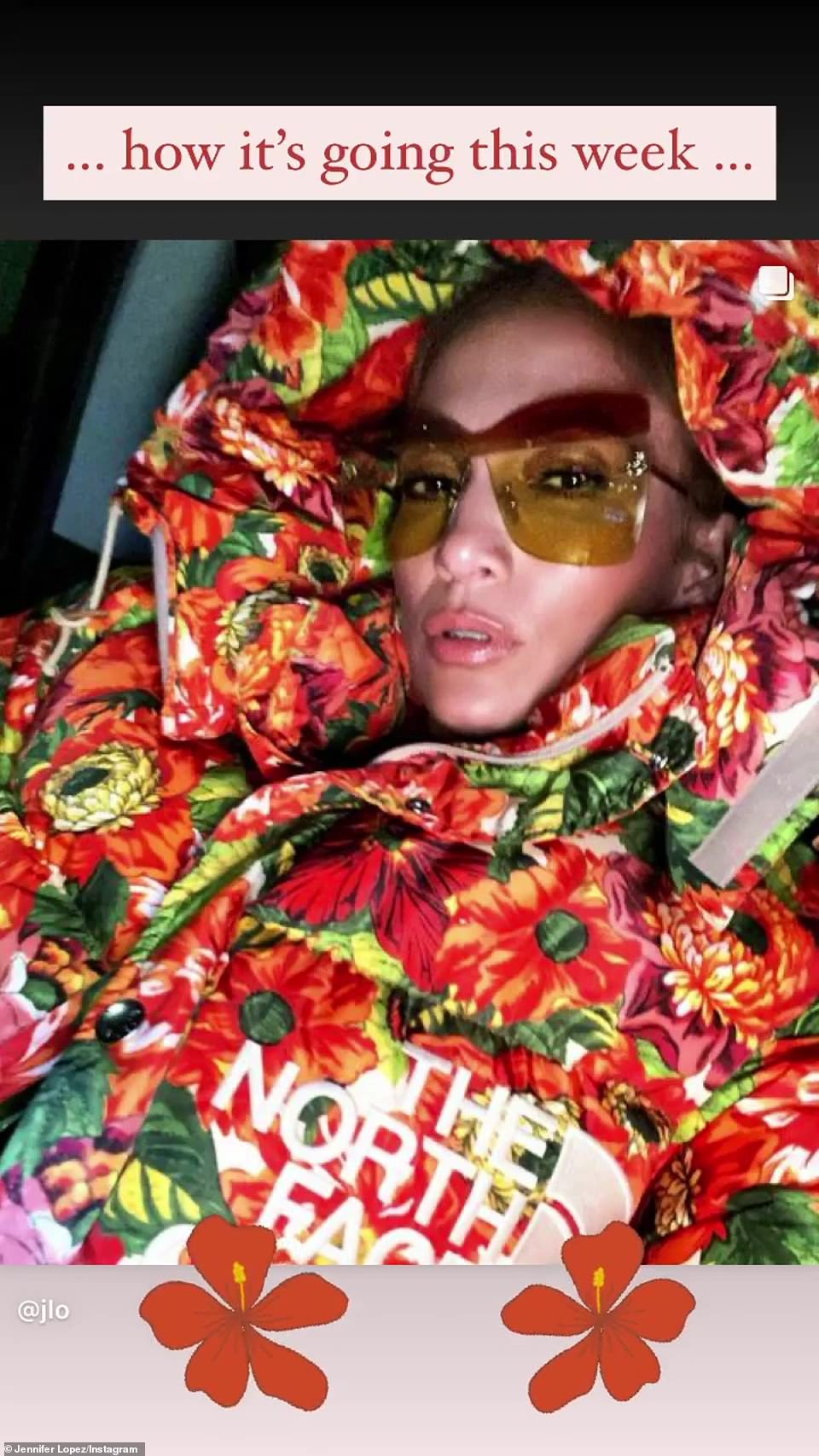 Brrr! Lopez was all bundled up as she returned from magical Turks and Caicos

High blood pressure: The four health drinks which could help to lower your reading

Cowboys for Trump leader arrested over US Capitol riot

Cowboys for Trump leader arrested over US Capitol riot

High blood pressure: The four health drinks which could help to lower your reading 0

Limping dog copies his injured owner out of sympathy 0

Some of the best dog friendly cafes across Australia 0

Rep. Madison Cawthorn claims he was armed on the floor when MAGA mob stormed Capitol 0