Melbourne 'royalty' Eddie McGuire has reportedly used his many high profile contacts, including the Victorian premier, to help escape his latest ga


Melbourne ‘royalty’ Eddie McGuire has reportedly used his many high profile contacts, including the Victorian premier, to help escape his latest gaffe.

Despite a number of highly publicised scandals in his career, the influential AFL and entertainment identity has always managed to salvage his reputation when people have called for his head.

Earlier this week, McGuire, 56, left many in disbelief after the veteran Collingwood president labelled the club’s ongoing racism inquiry a ­’historic and proud day’ for the embattled club.

McGuire’s time looked finished in the hot seat, only to be saved by arguably the two most powerful people in Victoria – Premier Daniel Andrews and AFL boss Gill McLachlan, The Australian reported. 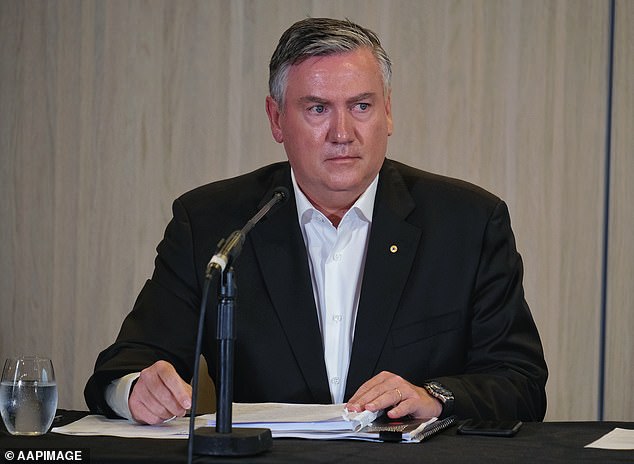 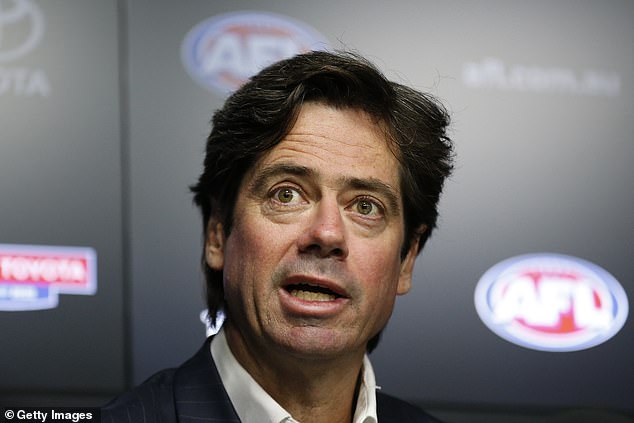 ‘It’s very much a boys club and they all scratch each other’s backs,’ one footy powerbroker told the newspaper.

‘He (McGuire) works very closely with those who are in ­office, and that in many ways is a very shrewd thing to do.’

McGuire stood accused of condoning toxic racism at one of Australia’s biggest sporting teams, with fans and critics alike confused by the controversial comment.

The Age reported some board members at the club this week have wondered if McGuire should walk away, but the decision was left with the man himself.

‘McGuire had the opportunity to make the honourable decision and relinquish the presidency, but didn’t,’ Robinson wrote in the Herald Sun. 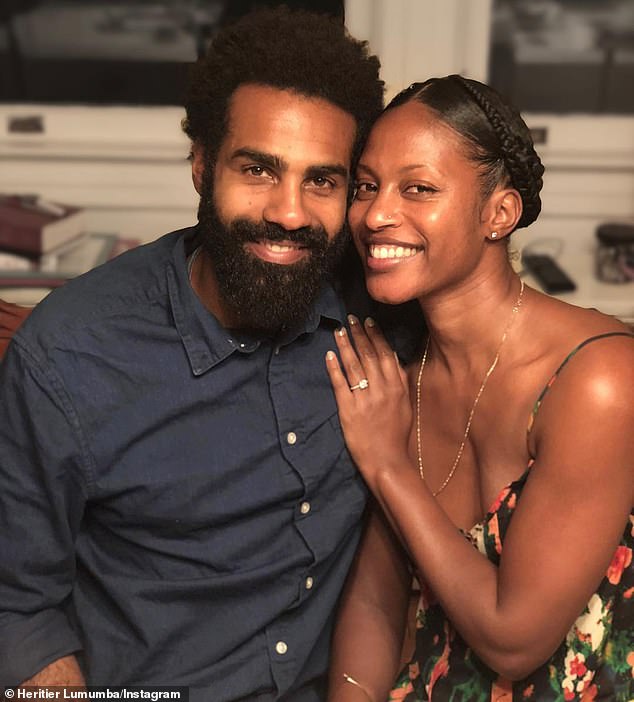 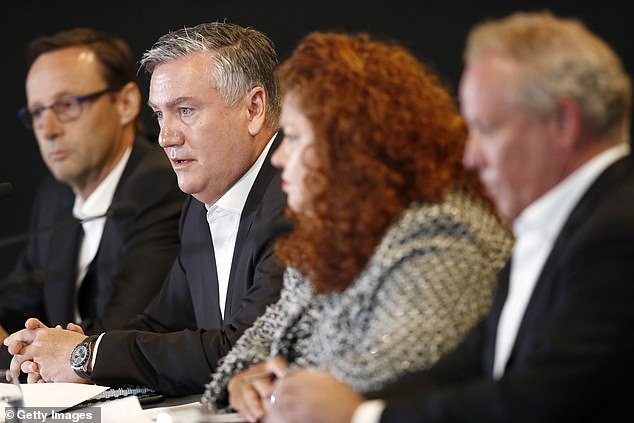 ‘He also should have offered a sincere apology, and accepted individual responsibility for his role (in the matter) before standing down immediately.’

Due to step down from his post this year after 23 years as the boss of the Magpies, McGuire got to work quickly as his latest gaffe threatened to end his presidency tenure on a sour note.

Former Magpie Heritier Lumumba, who instigated the racism inquiry, blasted McGuire in the media for his ignorant comments, labelling him ‘shameful.’

‘Instead of addressing the findings in the report, they issued a whole [lot] of meaningless statements, refusing to show accountability for the past and dismissed addressing historical complaints as ‘semantics’,’ he said.

‘For Eddie to begin by saying “it’s a historic and proud day” was offensive to me and no doubt others like me who have endured racism at the club.

‘This could have been a historic moment for the club to deal with systemic racism, but it just looks like business as usual.’

With the drums beating for him to step down immediately from the likes of 3AW’s Neil Mitchell and ­sports reporter Mr Robinson, McGuire reached for his phone and made two very important calls.

The first was to none other than Victorian premier Mr Andrews, the newspaper claimed, who had previously backed his old mate during his dire time of need. 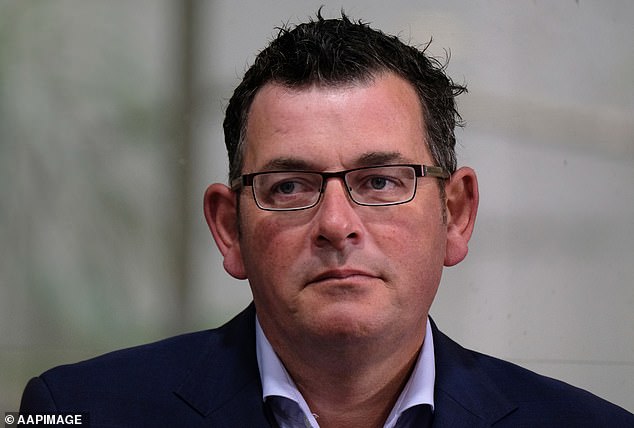 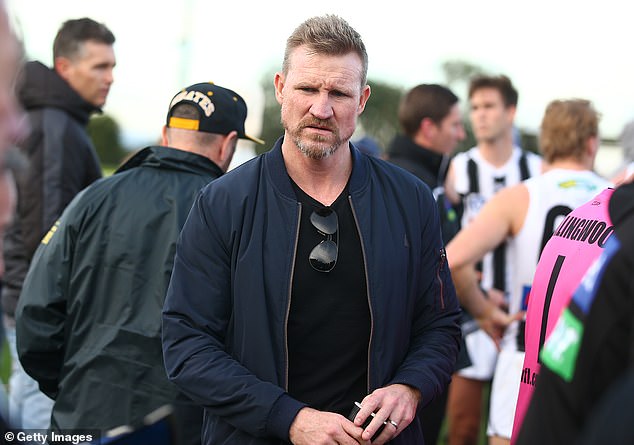 ‘I don’t think running away from challenges is leadership, whether it’s in a footy club or any other role,’ Andrews told reporters who asked him if he felt McGuire should resign from his post this week.

‘I think you’ve asked me should (McGuire) go, and I’m saying no. That doesn’t make any sense to me. That’s running from a challenge instead of dealing with it.’

Next call for the workaholic McGuire, who began his career as a footy statistician and cricket reporter for the now defunct Herald newspaper in 1978, was AFL boss Gill McLachlan, the Australian claimed.

McLachlan chose his words very carefully.  The AFL head honcho was critical when quizzed by journalists in a pof McGuire’s bizarre choice of words when discussing the inquiry, but didn’t go as far as condemning him.

‘I spoke to Ed (on Tuesday morning) and his intention was to say that he was wanting to look forward and embrace the recommendations from the inquiry,’ McLachlan said.

‘I would have articulated things differently – and I think Ed understands that position and probably agrees with that.’

At Collingwood’s annual general meeting this week, McGuire apologised for his backward language and admitted he was in the wrong.

Ever the self promoter, McGuire then stated he was recommitting for another year with the Magpies.

For a man who counts billionaire James Packer and cricket legend Shane Warne among his good friends, McGuire has lived a charmed life.

But his longevity at the top end of town has been no fluke – the long standing Who Wants to Be a Millionaire host and former radio identity with Triple M rubs shoulders with the elite on a daily basis in his beloved Melbourne.

*February 2021 – following allegations of systemic racism at the Collingwood Football Club after an independent report, McGuire declared it was a ‘historic and proud day’ for the Magpies

Baking soda shampoo: How to make a natural hair growth treatment at home 0

Vitamin B12 deficiency symptoms: Three painful signs in your mouth you may be ignoring 0