An incredible hoard of old photograph slides saved from being dumped at a tip in Shetland have offered a glimpse into the islands’ past and revealed how little has changed in up to 50 years.

Paul Moar, who works at the recycling centre in Lerwick, was shocked when Nick Dymond, 77, approached him with two bags filled with around 5,000 old photographs taken of his travels around the world.

Mr Dymond had decided to free up some space in his home and the projector he used to view the slides was no longer working. He told the New York Times: ‘I can’t do anything with them, and I’ve already seen all the things that I’ve taken photographs of.’

Mr Moar, 47, took the slides home and spent eight hours looking through them. He was amazed when he found that around 300 were of the Shetland Islands.

‘I could hardly believe my eyes as I sifted through the photographs one by one over the next few nights,’ Mr Moar told MailOnline. ‘I realised some of the Shetland slides were very special.’

The stunning pictures were taken from the early 1970s onwards when Mr Dymond worked as RSPB warden on the islands. They reveal the everyday life of the local community – from fishermen going out in their small boats to a farmer hand-feeding a lamb on the island of Fetlar.

Mr Dymond said the farmer pictured smiling kindly down at a small lamb was his ‘wonderful’ neighbour Lollie Brown, who died many years ago. THEN: Photographer Nick Dymond snapped an image of his neighbour Lollie Brown, who died years ago, feeding a newborn lamb on the island of Fetlar. Mr Dymond said: ‘He was just a wonderful man. That was a great reminder for me.’ THEN: An old photograph shows a group of men being pulled in their small boat as they head to a small island to work with their sheep 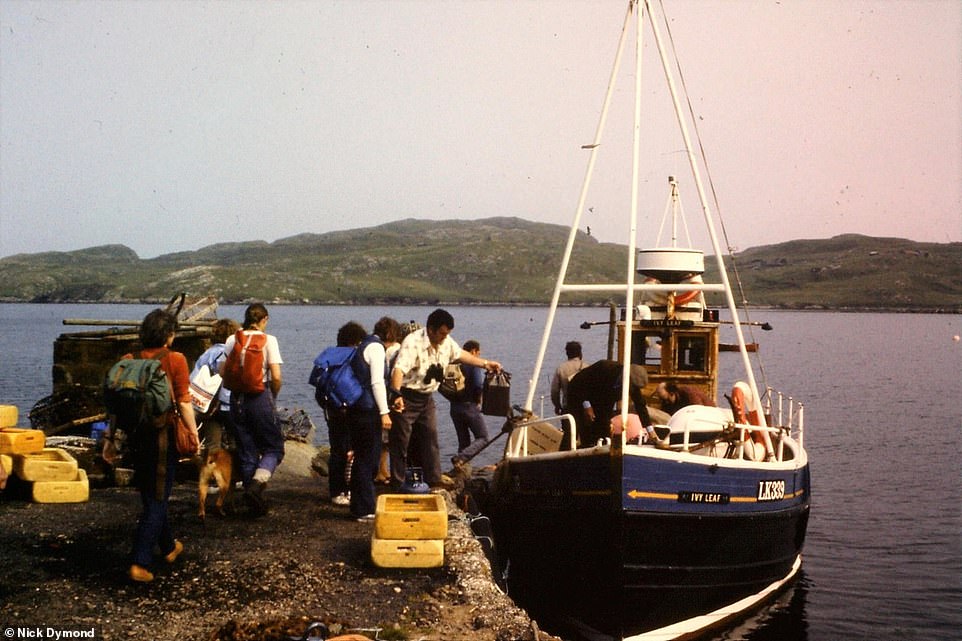 THEN: Nick Dymond pictured this group of naturalists who were packing to have a day trip on the island of Papa Stour THEN: The images also show the local wildlife – including a Walrus in Gutcher – and the stunning scenery, from rolling fields to the beautiful coastline 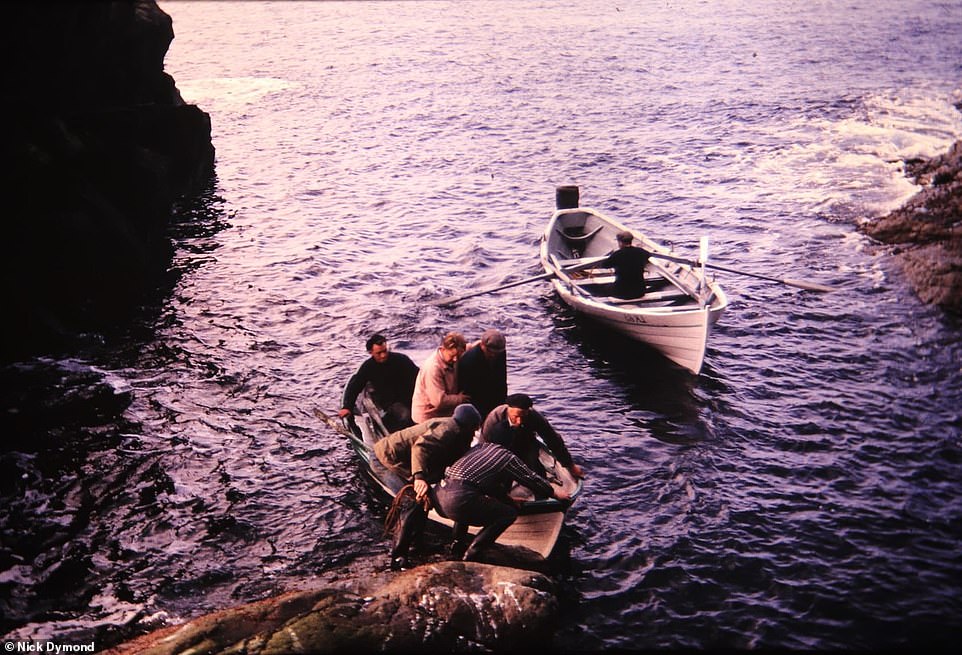 THEN: A group of men balance against the rough waters as they try to disembark from their small fishing boat off the coast of Shetland 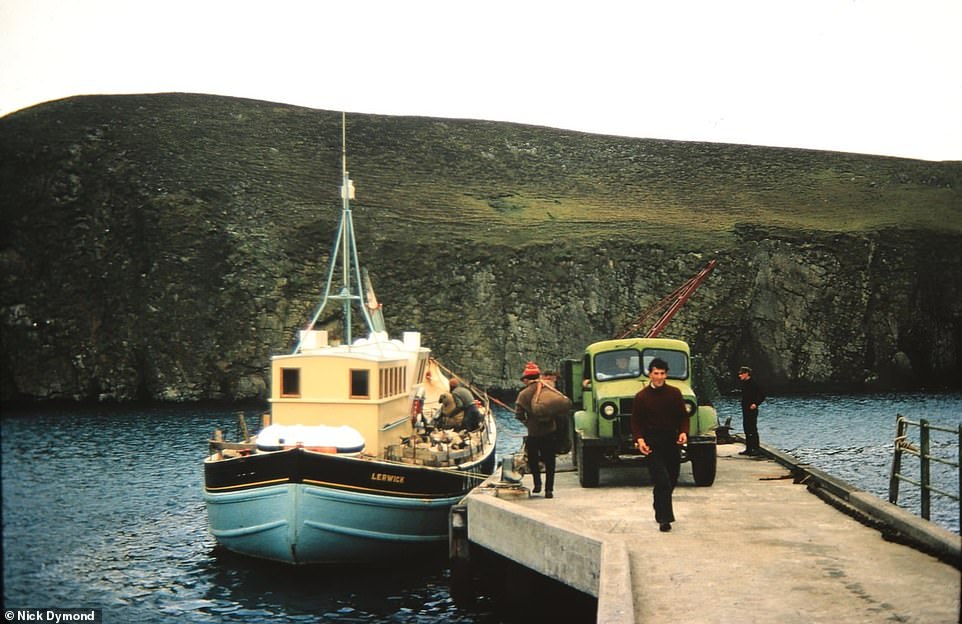 THEN: This is the ferry ‘Good Shepherd’ which serves Fair Isle and men are unloading stores for the island NOW: Pictures from today show how fishing remains an integral part of everyday life for people living on Shetland NOW: Around 50 years after the photographs were taken by Nick Dymond, he decided to get rid of them – but Paul Moar saved them 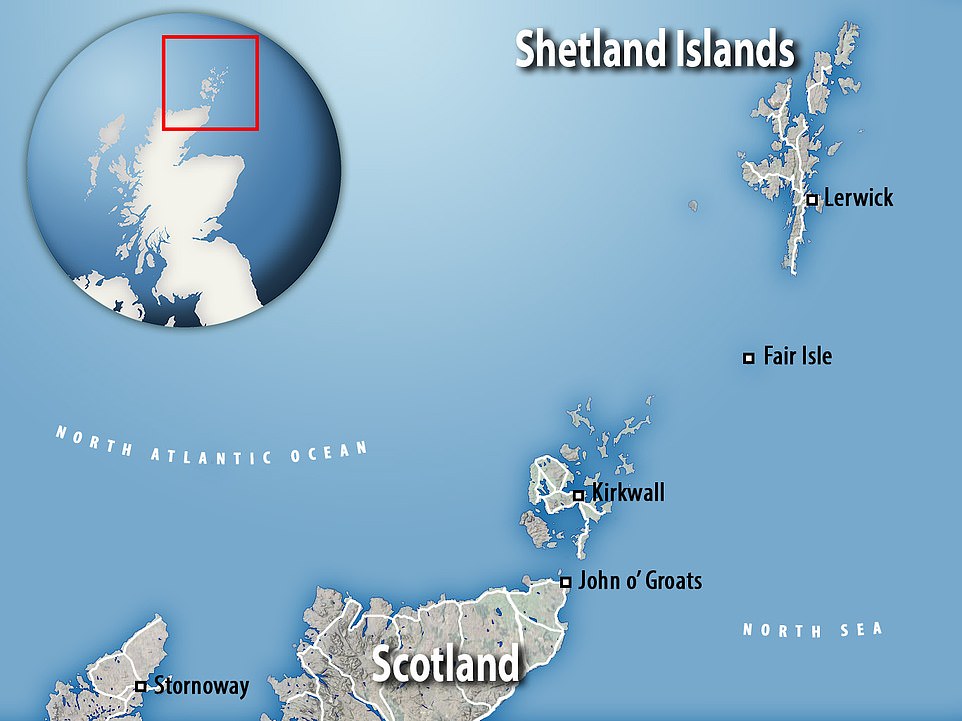 An old P&O ferry called the St Clair was pictured in the 1970s by Mr Dymond and while the ferry has since been decommissioned, P&O cruises will still frequent Lerwick in Shetland after lockdown restrictions are lifted.

The images also show the local wildlife – including a Walrus in Gutcher – and the stunning scenery, from rolling fields to the beautiful coastline.

Pictures from today show how farming and fishing remains an integral part of the island, whilst the stunning landscape remains largely untouched.

Mr Dymond loved nature and spent time with Shetland’s well-known naturalist Bobby Tulloch, who can be seen in one of the photographs on a boat with friends.

Today, Shetlanders still venture out on the waters and land to enjoy Shetland’s nature, scenery and wildlife.

Speaking about finding the photographs just in time, Mr Moar said: ‘This was probably a once-in-a-lifetime event and as someone who is interested in Shetland’s history, I was so glad to save such special photos.

He said the photos ‘capture an era before digital, the internet and mobile phones’ and has been struck by how many people have had a direct connection to many of the photos. 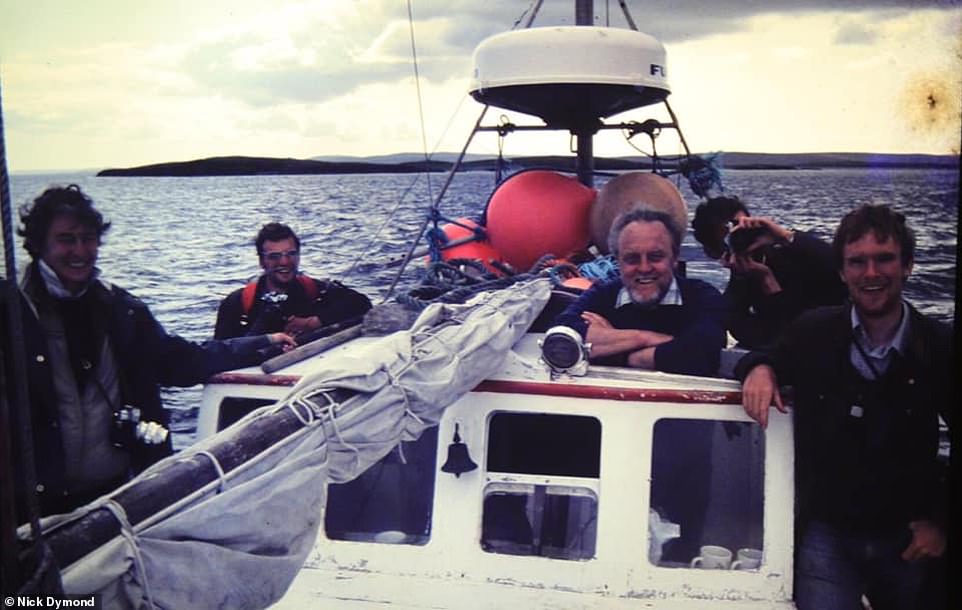 THEN: Mr Dymond loved nature and spent time with Shetland’s well-known naturalist Bobby Tulloch (centre, with arms crossed), who can be seen in one of the photographs on a boat with friends 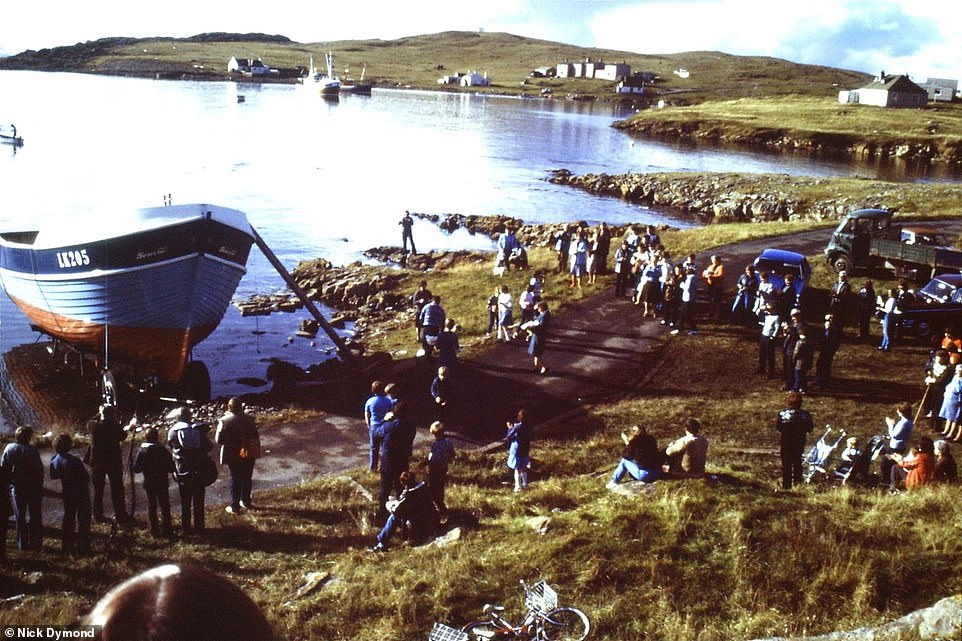 THEN: This picture shows the real sense of community in Shetland, with many surrounded a fishing boat at the shore 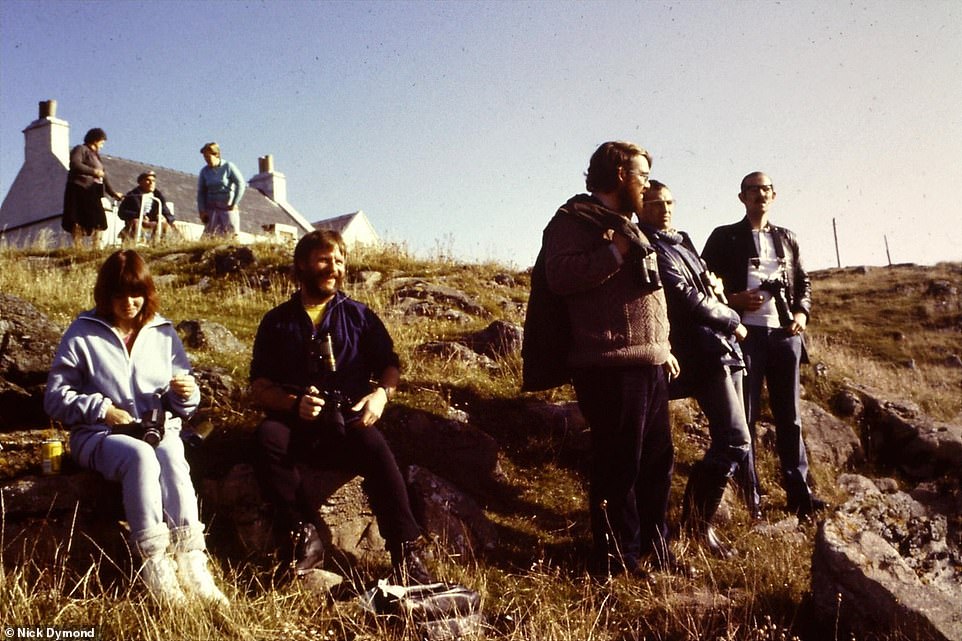 THEN: Mr Dymond, who loves nature, captures a group of his friends who were also keen photographers on the rugged landscape 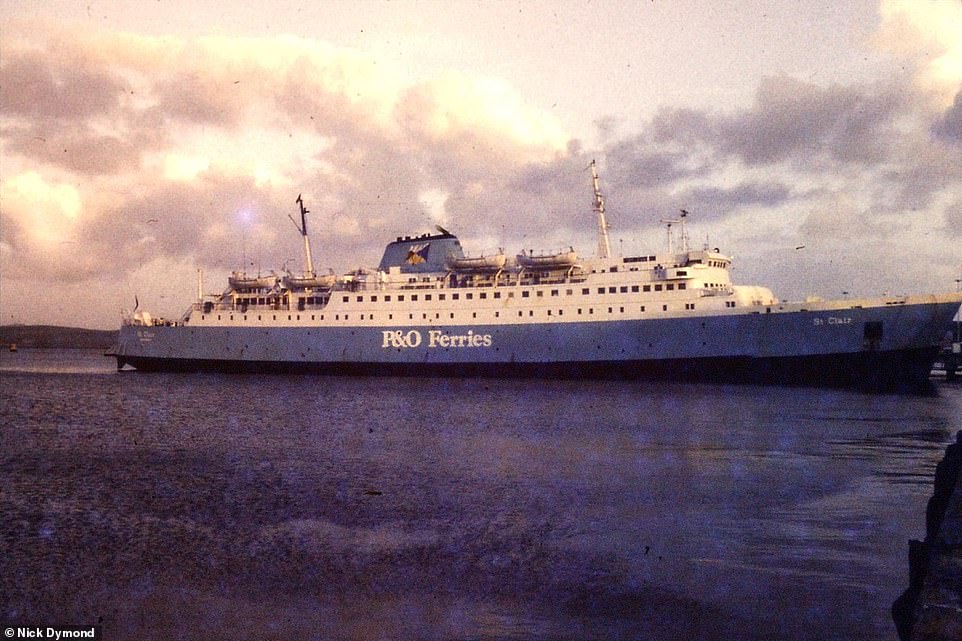 THEN: An old P&O ferry called the St Clair was pictured in the 1970s by Mr Dymond and while the ferry has since been decommissioned, P&O cruises will still frequent Lerwick in Shetland after lockdown restrictions are lifted 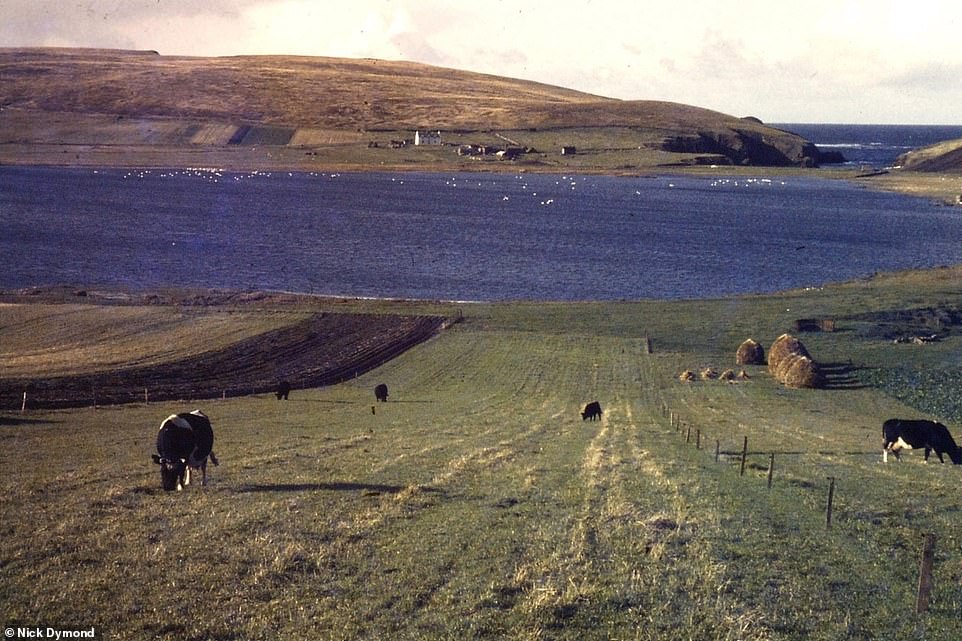 THEN: The photograph shows the fields of crops and grass where cows feed. Farming is still an integral part of life in Shetland 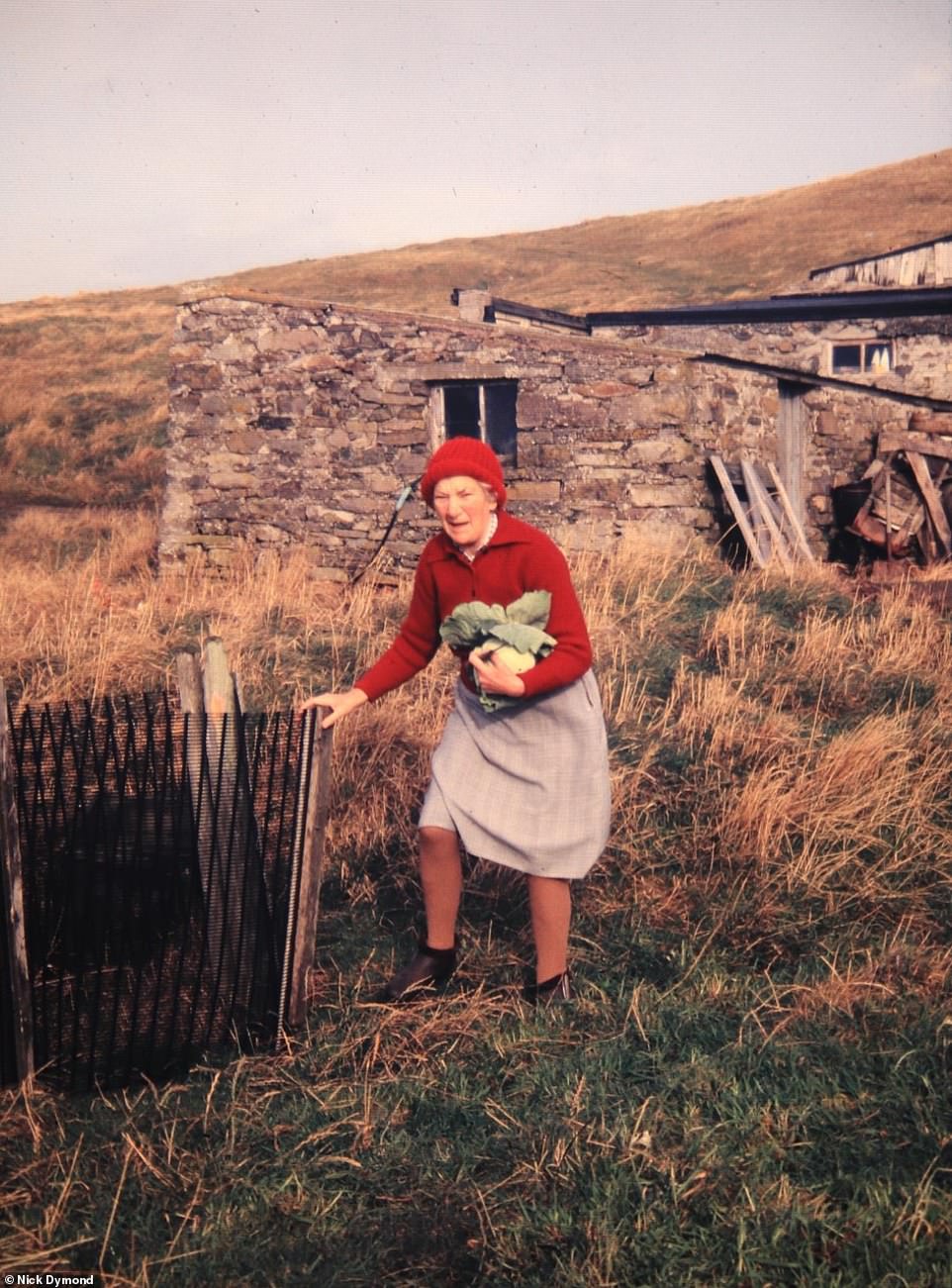 THEN: A woman wearing a matching red jumper and hat looks into the camera as she carried what appears to be cabbages 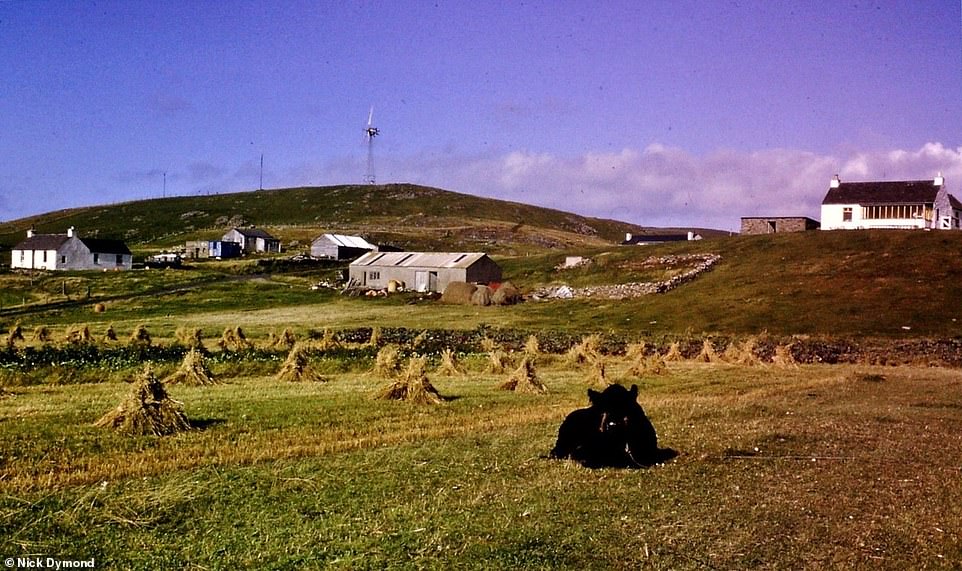 THEN: Farming and crofting remains a big part of Shetland life – but now there aren’t as many small fields of crops and hay near a small croft house 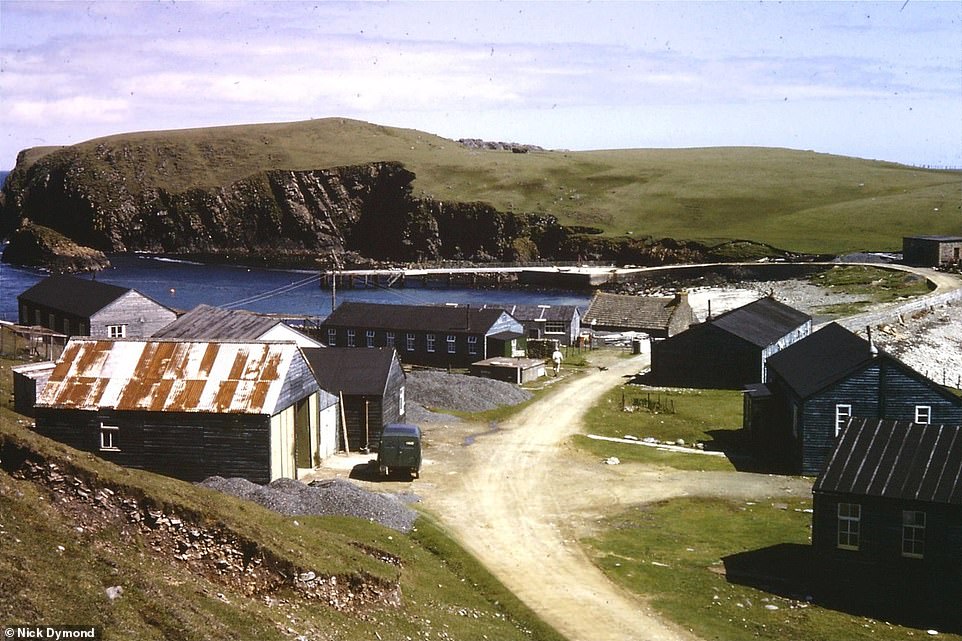 THEN: There were very few buildings in Shetland 50 years ago, with islanders focusing on farming and fishing at the time 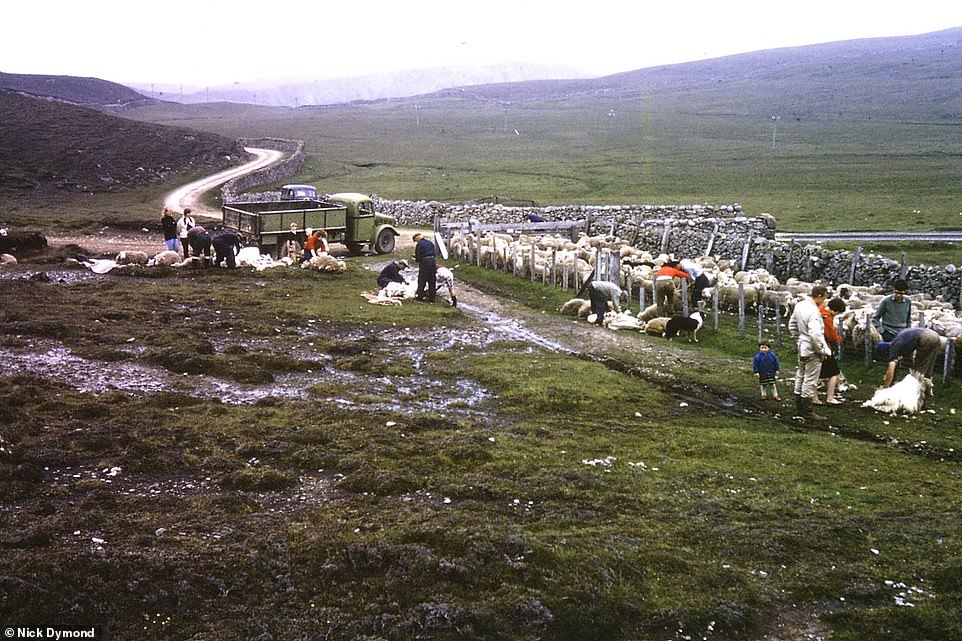 THEN: Sheep farming was an integral part of life in Shetland 50 years ago as seen in this picture where farmers shear sheep 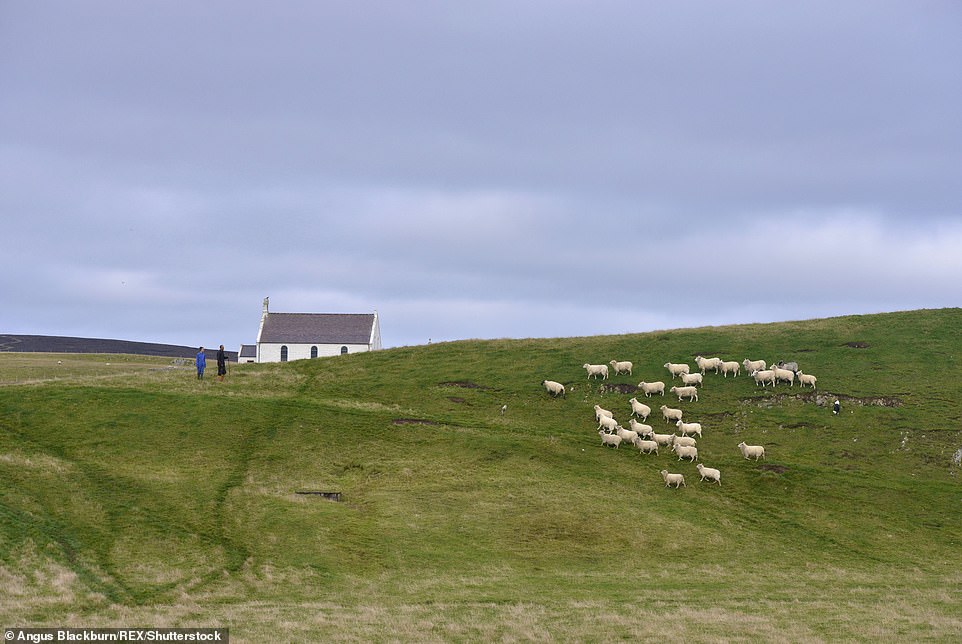 NOW: Sheep farming and crofting remains a big part of Shetland life 50 years on – as they enjoy large rolling fields

Mr Moar added that the landscape is still much the same in Shetland 50 years on. But the biggest difference for islanders are in technology, transport – in terms of new roads – and the economy.

‘The photos are from an era when Shetland was transitioning from a crofting and fishing based economy to one which included the oil industry and tourism,’ he said.

But fishing and the seafood sector remains a vital part of Shetland, with many fishing boats lining the port – as they did 50 years ago.

Sheep farming and crofting remains a big part of Shetland life – but now there aren’t as many small fields of crops and hay near a small croft house.

Mr Moar hopes to donate the photographs to the Shetland Museum and Archives in Lerwick once the lockdown is lifted.

Dr Ian Tait, who is the curator at the museum, told MailOnline: ‘The importance of these photographs is considering them along with those thousands of other photos from that time, because Mr Dymond was a far better photographer than most, and good colour pictures from the 1960s aren’t that common.’

He said the oil era of the mid-1970s sparked changes in the Shetland islands, which was slowly depopulating. It brought about schools, health clinics and shops.

‘The oil quickly brought change, and Mr Dymond’s photos straddle that era,’ Dr Tait said. ‘With the huge economic boost, there has been continued change since the time of these photos.

‘Shetland’s population has continued to cluster where quickest travel to Lerwick can happen, and especially clustering in smaller villages, as opposed to the older dispersed way of life.’

But despite the developments brought about by the oil industry, the island is still only populated by around 22,000 people and it’s a beautiful haven of mostly untouched natural beauty. 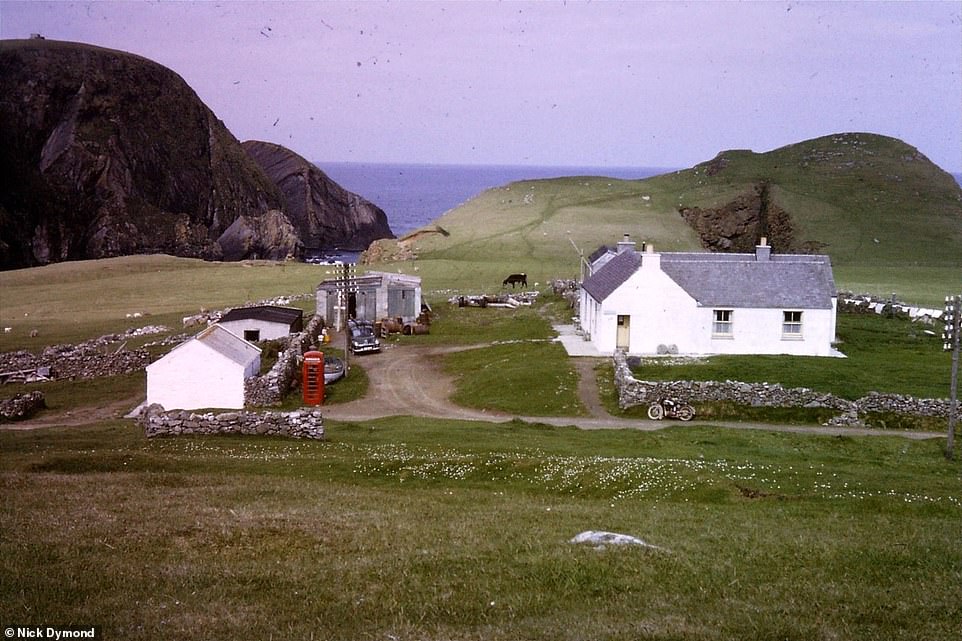 THEN: This picture reveals how remote the houses were in Shetland 50 years ago – and they still are – as this group of buildings is surrounded by rugged cliffs, the sea and farmland 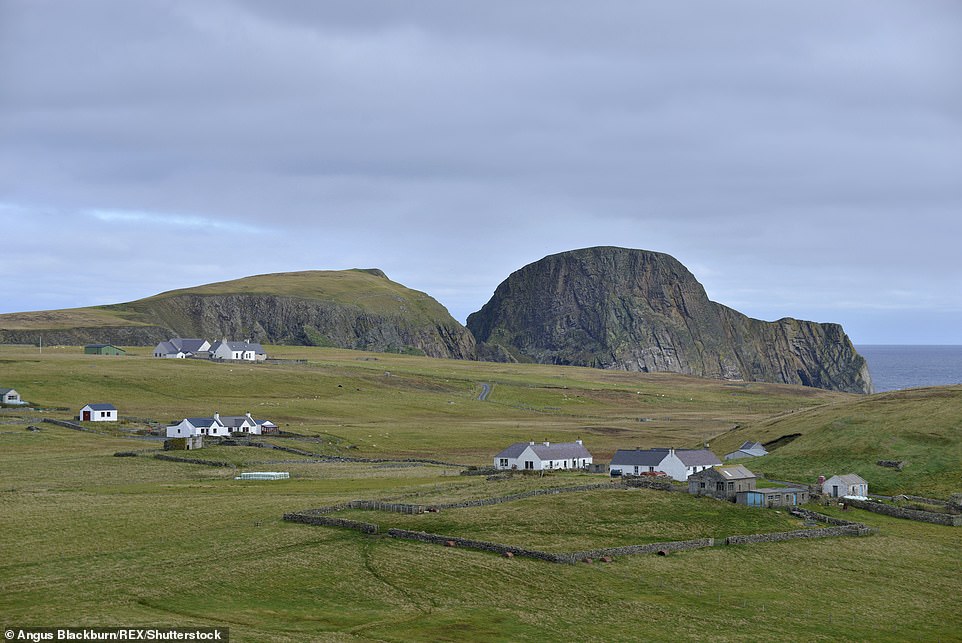 NOW: The landscape in Shetland remains largely untouched – but Mr Moar says a difference is that now there are better roads 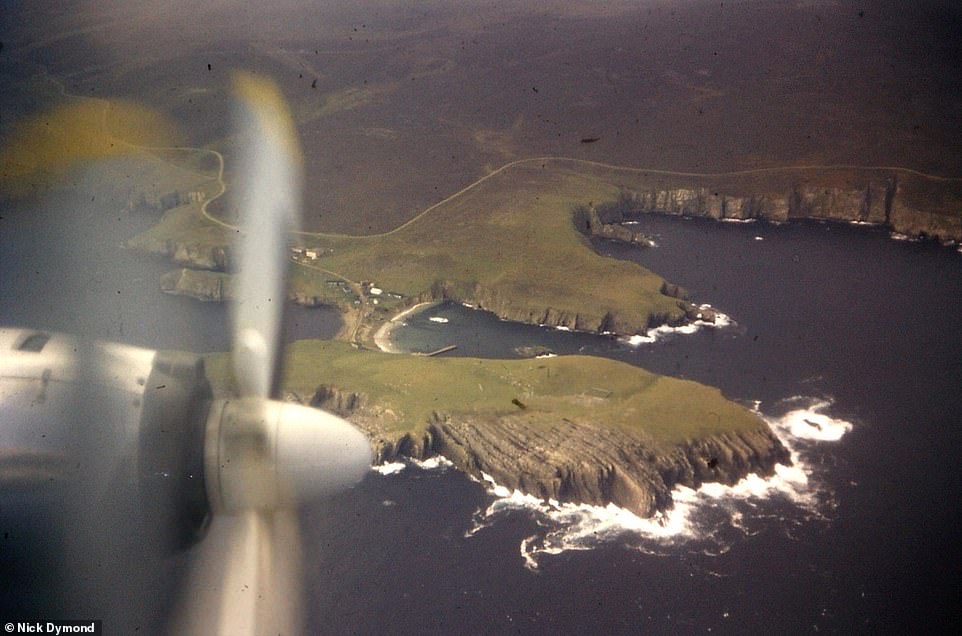 THEN: The largely untouched and rugged landscape of Shetland is captured in this stunning picture from the air

NOW: Mr Moar added that the landscape is still much the same in Shetland 50 years on. But the biggest difference for islanders are in technology, transport in terms of new roads and the economy