Being a working actress in Hollywood is tough enough, but having a baby on the way can make things just a little more complicated.  On Saturday Hil

Pregnant Fiona Falkiner flaunts her blossoming belly at the beach
How to get rid of visceral fat: Meal frequency influences belly fat – how often to eat
Fatty liver disease: A belly ache could be a tell-tale sign you have the condition


Being a working actress in Hollywood is tough enough, but having a baby on the way can make things just a little more complicated.

On Saturday Hilary Duff, 33, revealed the struggles of being pregnant while filming a television show, as she tried to conceal her growing belly underneath a floral silk blouse while filming Younger in New York City.

Playfully acknowledging the situation at hand, she lamented to her Instagram fans, ‘What hides this anymore, CGI?’ 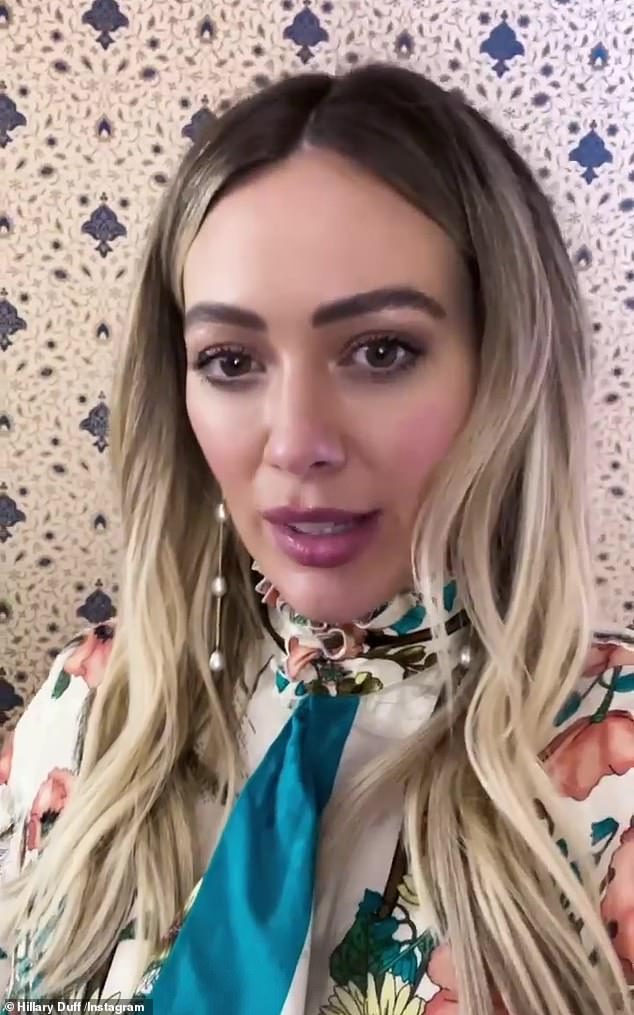 Pregnancy problems: Hilary Duff, 33, struggles to conceal her pregnant belly underneath a floral blouse while filming her show Younger, lamenting ‘What hides this anymore, CGI?’

The Lizzie McGuire star was all decked out in costume for her character Kelsey on the hit sitcom, which stars Sutton Foster as a 40-year-old woman trying to moonlight as a twenty-something year old working professional.

Duff showed off her look for the day as she rocked a colorful Gucci turtleneck style blouse that appeared flowy, and pearl drop earrings with a full face of makeup.

‘Obsessed with this wallpaper and my top. Everything looks normal Kelsey until you get down here,’ she said, panning to her belly as she cradled it. 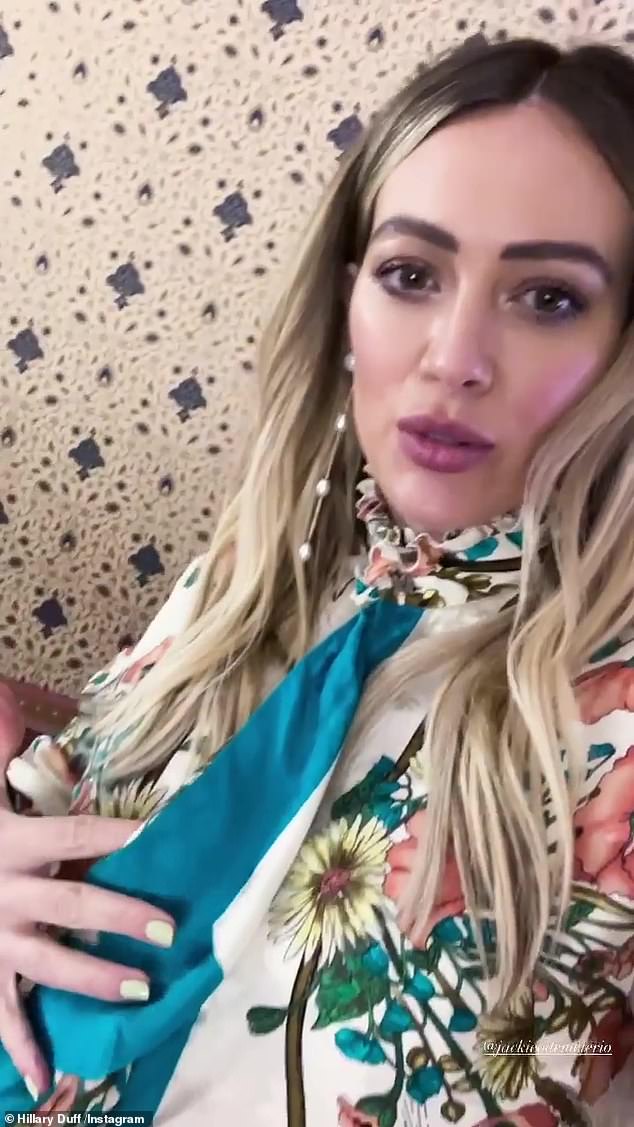 TV magic: Despite wearing what seemed to be a flowy blouse she said she was very pregnant and did not understand how she would not show in the costume 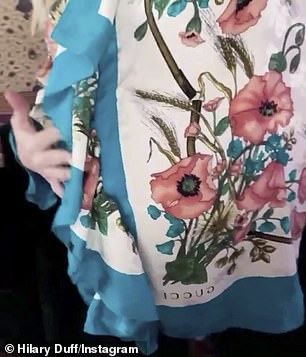 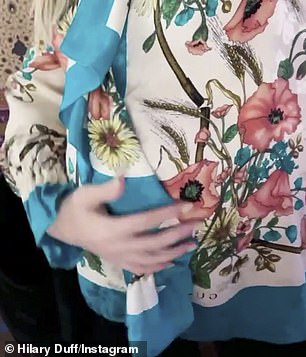 It’s Gucci: The flowy Gucci blouse was her wardrobe for the day as she said she was ‘obsessed with it’ 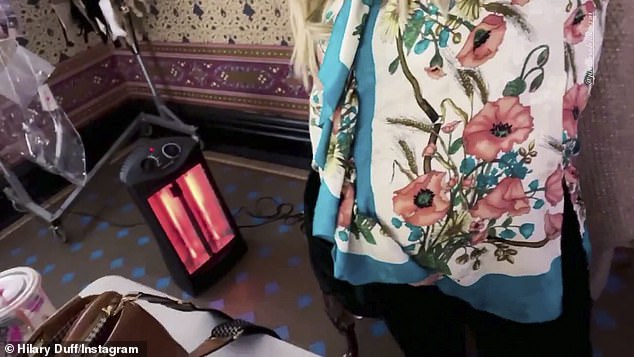 Bumpin: Upon panning downwards her bump was on full display as she prepped for a scene in NYC 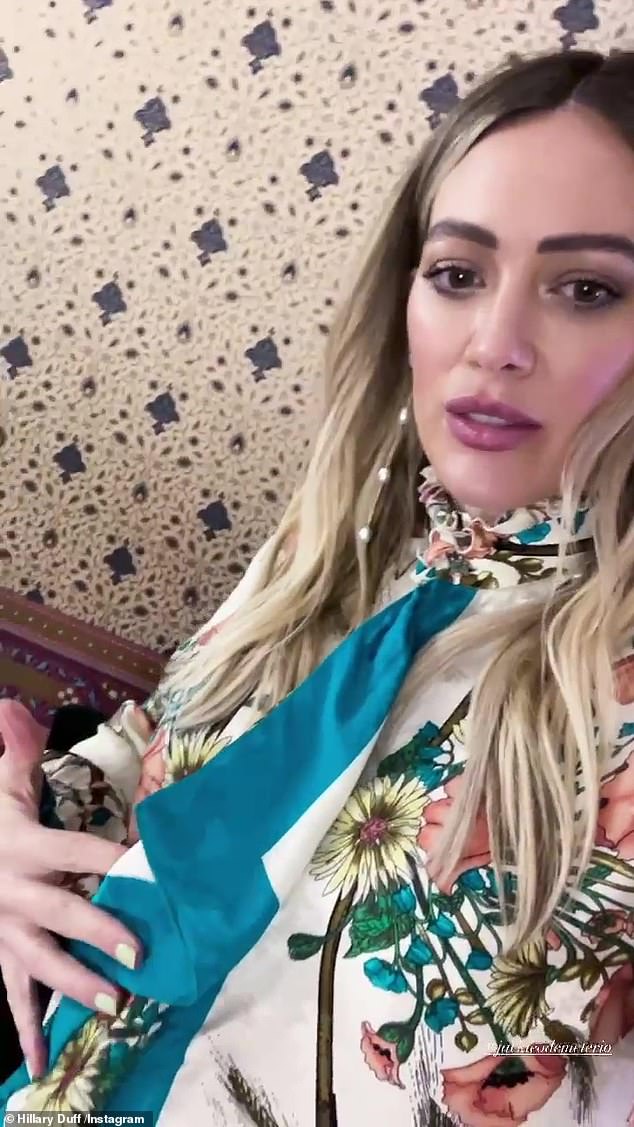 Expecting: The Lizzie McGuire star revealed she was expecting her third child and second with husband Matthew Koma in late October

Later in the video she shared a playful word exchange with costar Molly Bernard as they joked that Hilary had only gotten an ‘approximation’ of her lines correct.

She has been stationed on the east coast while filming the seventh season of the show, also enduring a slight COVID-19 scare ahead of Thanksgiving.

Though she did not say whether or not there had been an outbreak on set she admitted she had been ‘exposed’ to the virus and was forced to quarantine away from her family. 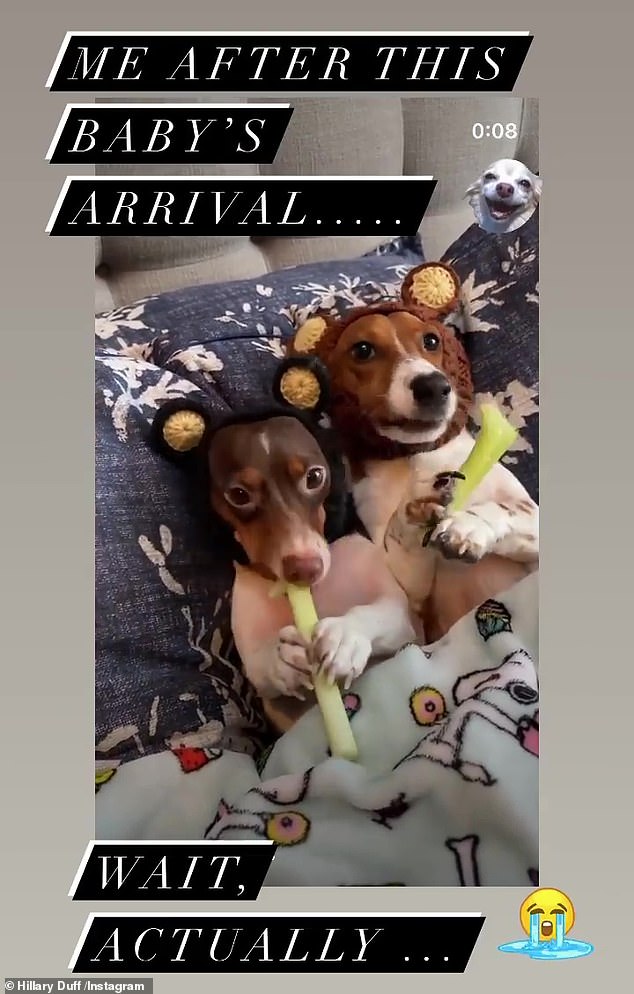 Baby on board: Duff seemed posted a video of dogs eating celery as she wrote ‘Me after this baby’s arrival’ 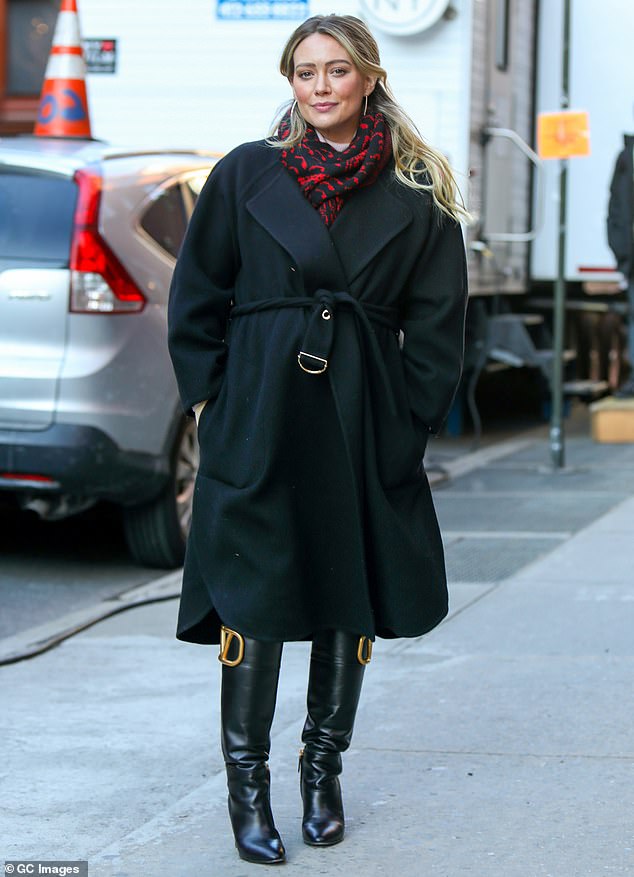 Wardrobe fix: The pregnant actress has been filming Younger since the fall but she shared she was ‘exposed’ to COVID-19 in November, never revealing if there was an outbreak on set; pictured January 28

Duff is currently expecting her third child – the second with husband Matthew Koma – after revealing the exciting news on Instagram in late October.

‘We are growing!!! mostly me…,’ she captioned a video of Koma rubbing her belly.

Now less than two months away from her new arrival, she asked her fans in January to guess the sex of her baby, revealing in a People interview that she had no plans to find out her child’s gender ahead of time.

She spoke about having a gender reveal party for their two-year-old daughter Banks but said: ‘During these times we felt it wasn’t really appropriate. The way we are creating some excitement within the family is to wait to find out the sex on the baby’s birthday!’ 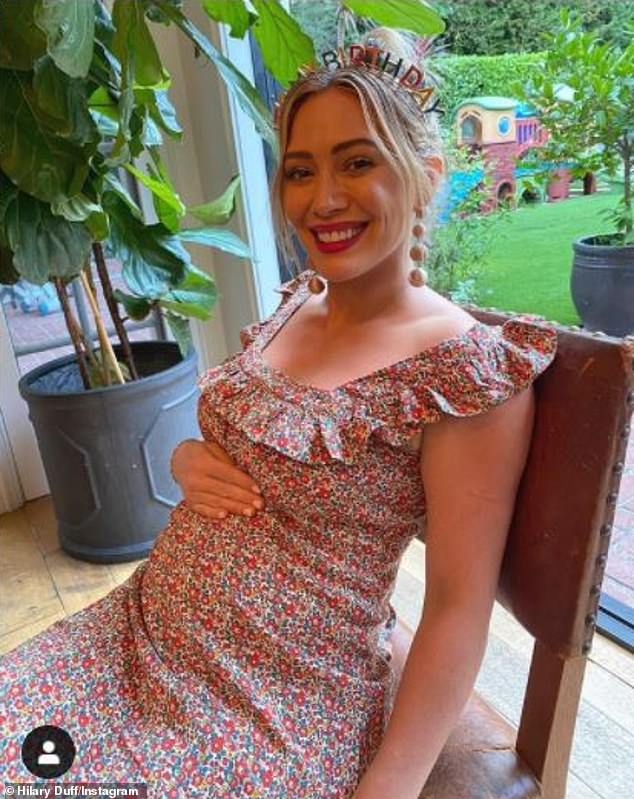 Arriving soon: The actress is about eight weeks  away from welcoming her baby; pictured December 1

Hilary said this pregnancy felt ‘easier’ because it was her third and she was busy with ‘kids and work,’ adding that she was not ‘googling everything and obsessing over everything that’s happening with the pregnancy.’

She continued to touch on pregnancy as she said, ‘I’m not one of those women who loves being pregnant by any means, but I appreciate what my body’s doing for me and our family,’ adding that this is likely the last child she will be having.

She welcomed Banks with Koma a year before they married in 2019, and also has son Luca, eight, from her previous marriage to ice hockey player Mike Comrie. 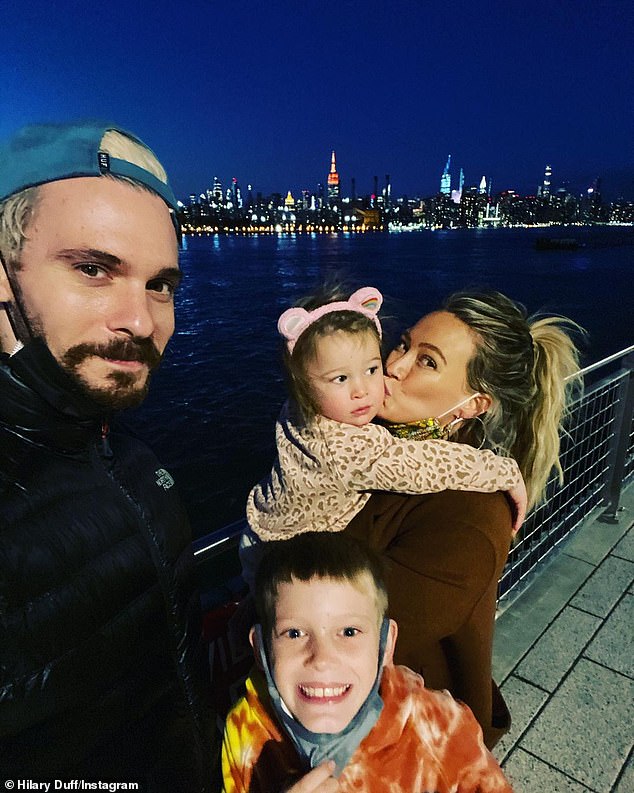 Growing family: She and Koma share Banks, two, who they welcomed a year prior to marrying, and she shares son Luca, eight, with ex-husband Comrie; pictured November