By Isabella Nikolic For Mailonline

This is the heart-stopping moment an 87-year-old man was rescued after falling asleep at the wheel and veering off the road into a river 25 feet below him.

A police officer and a passerby jumped down into the river to help the man, who was screaming and trapped inside his car, in a river in Danielson, Connecticut, on January 9.

A dam operator upstream was able to restrict the flow of the river to help lower the water level, according to local reports.

The police officer then tried to calm the man down while waiting for the fire department to arrive to cut the roof off the car. 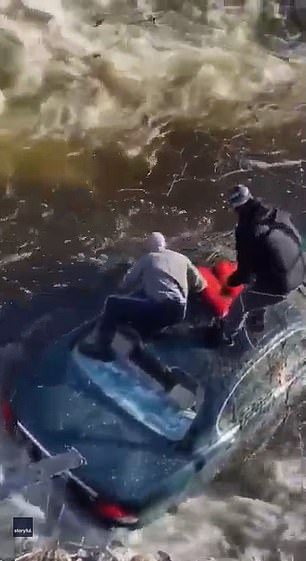 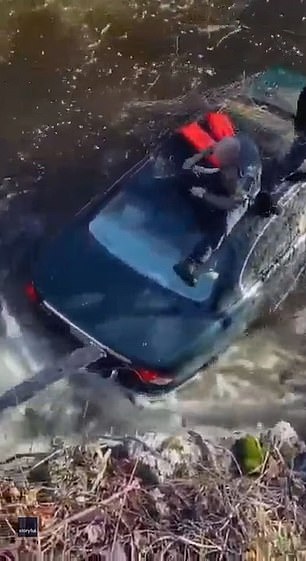 Once the man was freed he was airlifted to hospital to be treated for injuries and hypothermia.

Witness Dennis Durand, who filmed the footage at around midday, was driving through his neighborhood when he heard a loud crash.

He assumed one of the vehicles behind him had hit the guardrail and was shocked to see what had happened.

His footage shows the officer and passerby remaining on top of the car and communicating with the driver that more help is on the way.

More authorities arrived and were able to cut the car’s roof off, extract the man, and transport him to a local hospital to be treated for hypothermia and other injuries, according to the Danielson Fire Department.

The fire department posted about the incident on Facebook and said: ‘A single vehicle motor vehicle accident, car into the River at Main St and Water St came in just after 11:15am.

‘Crews from Danielson and South Killingly along with the QV South Dive Team perform a Technical River rescue that also required victim extrication. 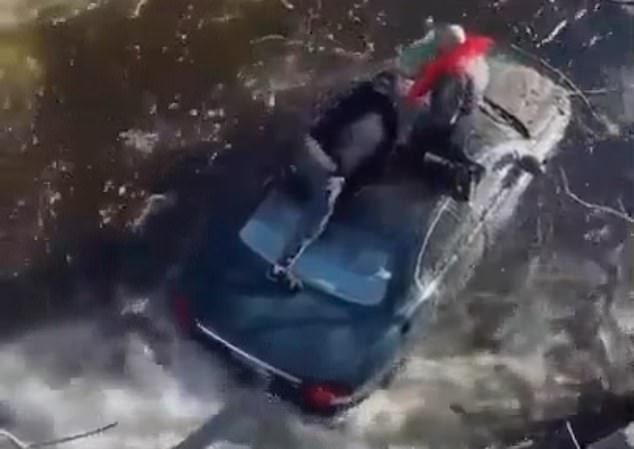 ‘After cutting the roof free from the vehicle, technical rescue team members were able to package the patient to be hoisted from the river by stokes basket.

‘The occupant of the submerged vehicle was flown by Lifestar for injuries and hypothermia.’

Mr Durand posted the footage to Facebook alongside the caption: ‘I was there when this happened yesterday it was a car two cars behind me. I jumped out of my car to see the driver behind me yelling that someone had went over in a car.

‘A bystander was the first one who went down to the driver in the water it was amazing to see someone risk their own life to try and save another.

‘Within a few mins the first officer showed up on scene . I’m not sure the name of the officer but he didn’t hesitate for one second…I was able to get this video and wanted to share it to show how amazing these two are.

‘Almost daily you see negativity all around us. To get to witness this was something I’ll remember forever.

‘I wanna give a big thanks to the officer who didn’t hesitate for a second to save this man’s life you two did everything right …   I pray and hope the older gentleman is ok and doing well this morning. Ty for all the first responders as well for the amazing job they also do everyday!!!’

Bill, Melinda Gates' split after 27 years of marriage was due to a ‘combo of things’: report

Bill, Melinda Gates' split after 27 years of marriage was due to a ‘combo of things’: report 0

Ulrika Jonsson, 53, admits she loathes mammograms yet urges women to screen their breasts 0