Europe enters the deep freeze: Thousands without power in Sweden

Europe was in the grip of snow chaos today as power went out in Sweden and Finland, footage emerged of looters ransacking a food truck in Spain and


Europe was in the grip of snow chaos today as power went out in Sweden and Finland, footage emerged of looters ransacking a food truck in Spain and one person died as cars swerved off ice-covered roads in Germany.

In Madrid, footage showed dozens of looters emptying a lorry full of vegetables, yoghurts and milkshakes after it was stranded in the heavy snow in the Spanish capital, with detectives today trying to identify the culprits.

Parts of Sweden were buried under 24 inches of snow while 3,000 homes were without power in the country as well as 4,000 households in Finland, with temperatures set to drop as low as -40C in Arctic regions.

As snow and ice descended across the continent, Swiss traffic police reported 50 road accidents in the space of six hours in Bern while an 18-year-old motorist died after swerving off a road and hitting a tree in Germany.

The extreme cold is expected to get even worse in the coming days, with Switzerland warning of avalanches and Poland facing -20C (-4F) temperatures with Friday likely to be the worst of the cold snap – and Spain set to impose emergency measures after Storm Filomena swept through the country. 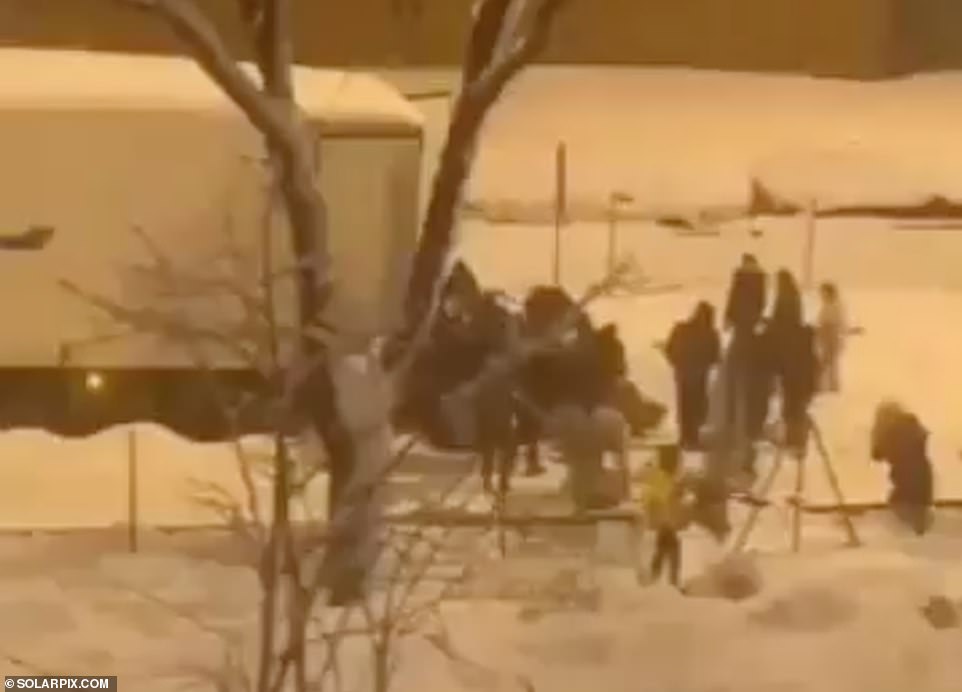 SPAIN: In Madrid, footage showed dozens of looters emptying a lorry full of vegetables, yoghurts and milkshakes after it was stranded in the heavy snow in the Spanish capital, with detectives today trying to identify the thieves 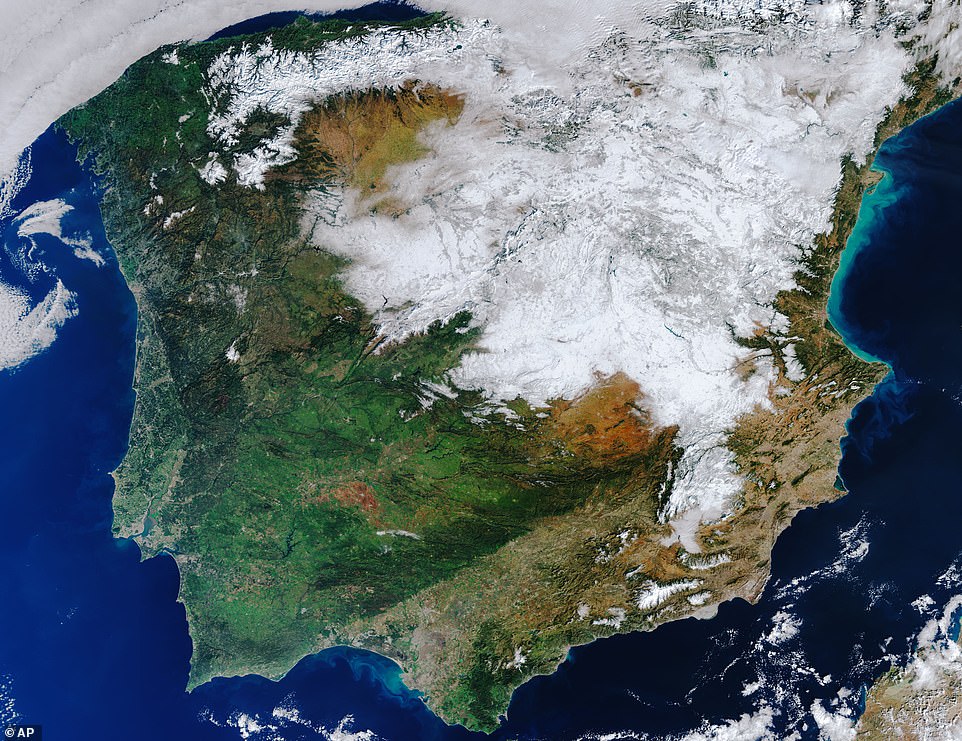 SPAIN: A satellite image provided by the European Space Agency today shows the heavy snowfall on the Iberian peninsula 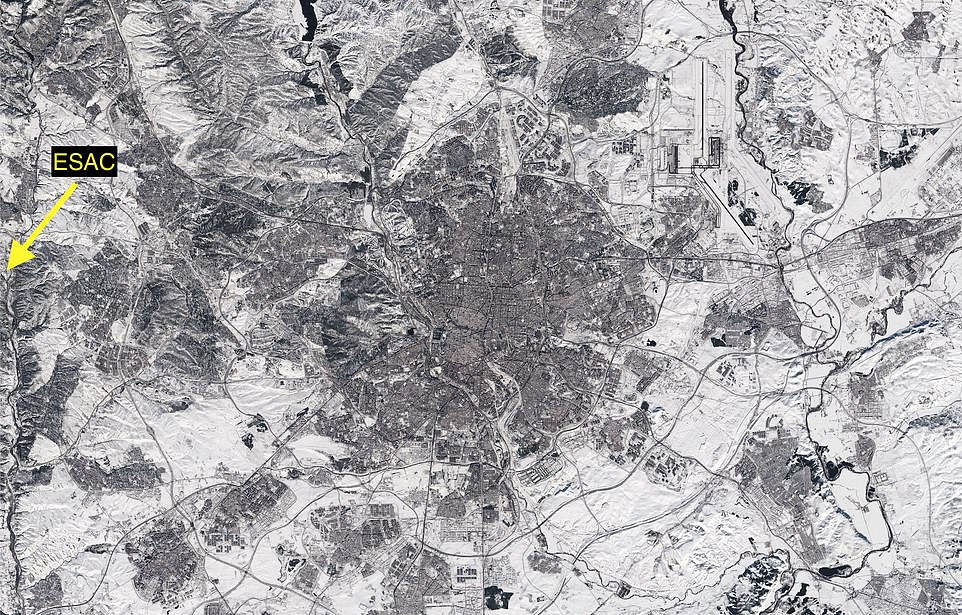 SPAIN: An image from the Copernicus Sentinel-2 satellite shows a snow-blanketed Madrid after heavy snowfall in Spain 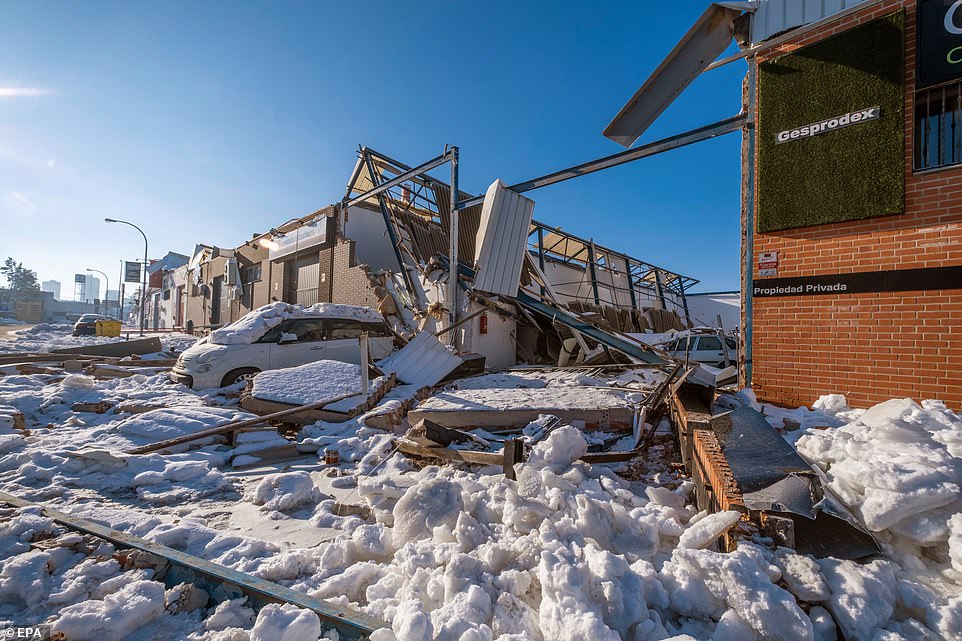 SPAIN: A snow-covered scene of carnage at an industrial site in Toledo today after Storm Filomena hit the region 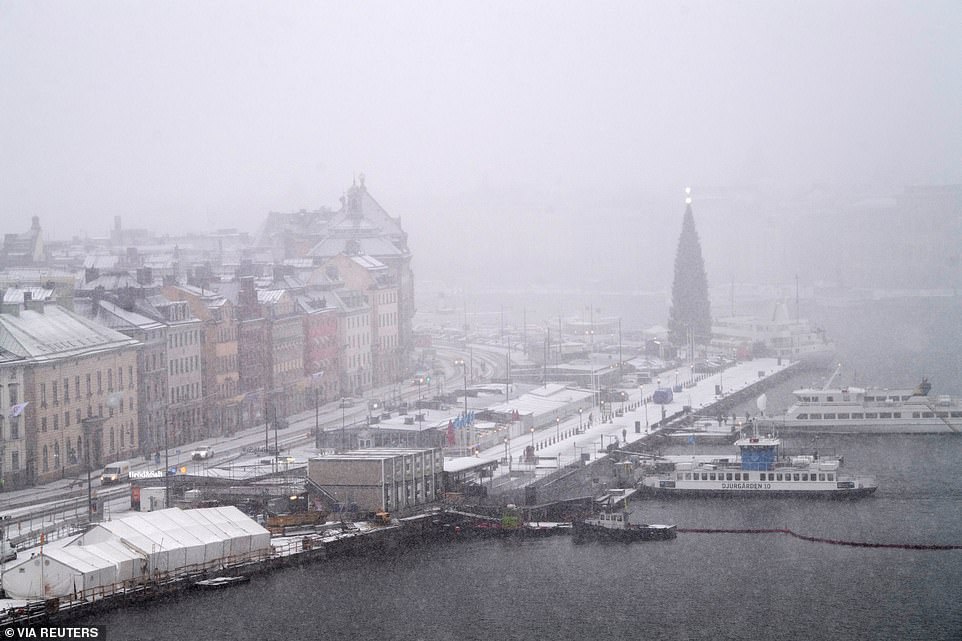 SWEDEN: Snow falls steadily over the capital Stockholm today as thousands of homes were left without power in the country 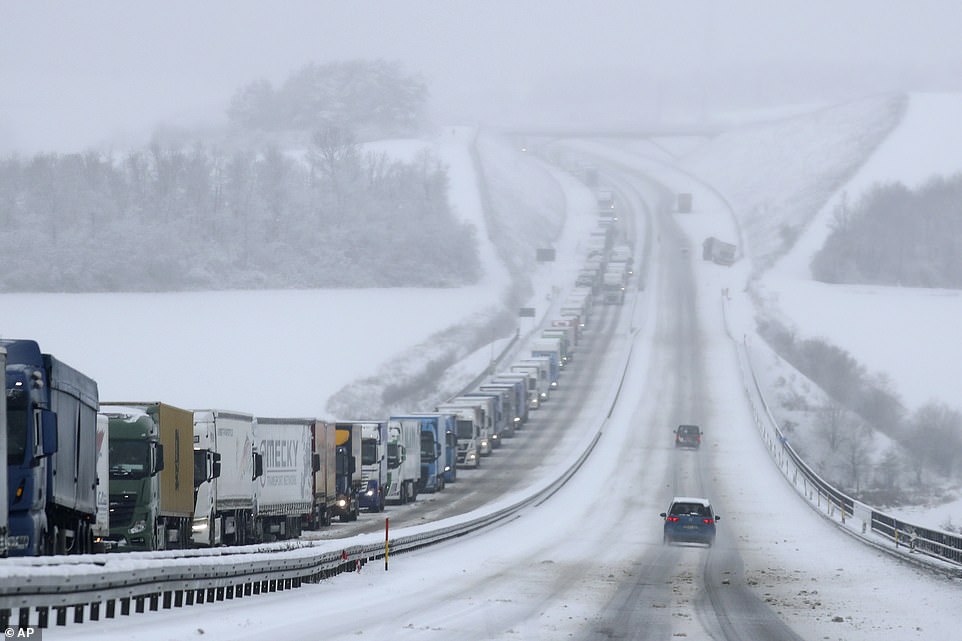 GERMANY: Lorries queue between Schleusingen and Eisfeld amid icy conditions which led to a man’s death overnight 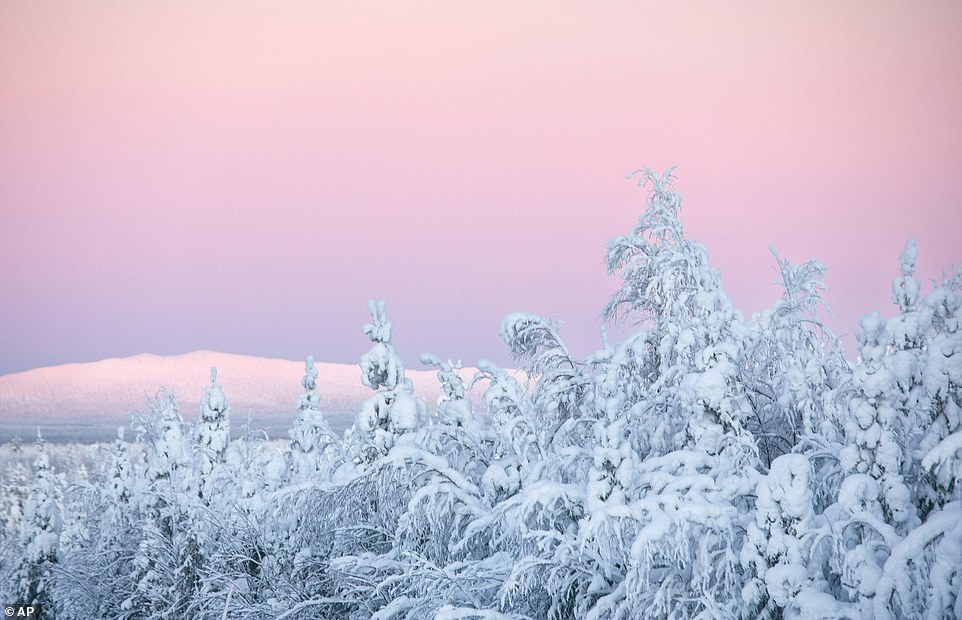 FINLAND: Snow-covered trees are seen in Kittila in the Nordic country’s northernmost region of Lapland today 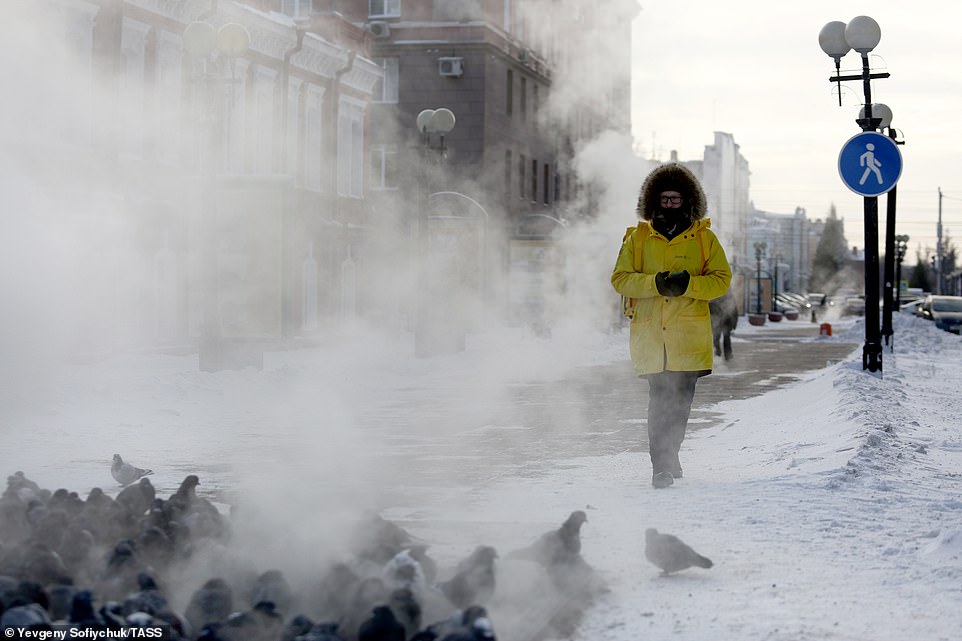 RUSSIA: A delivery worker walks over an underground heating pipe and looks at a crowd of pigeons in -25C weather in Omsk 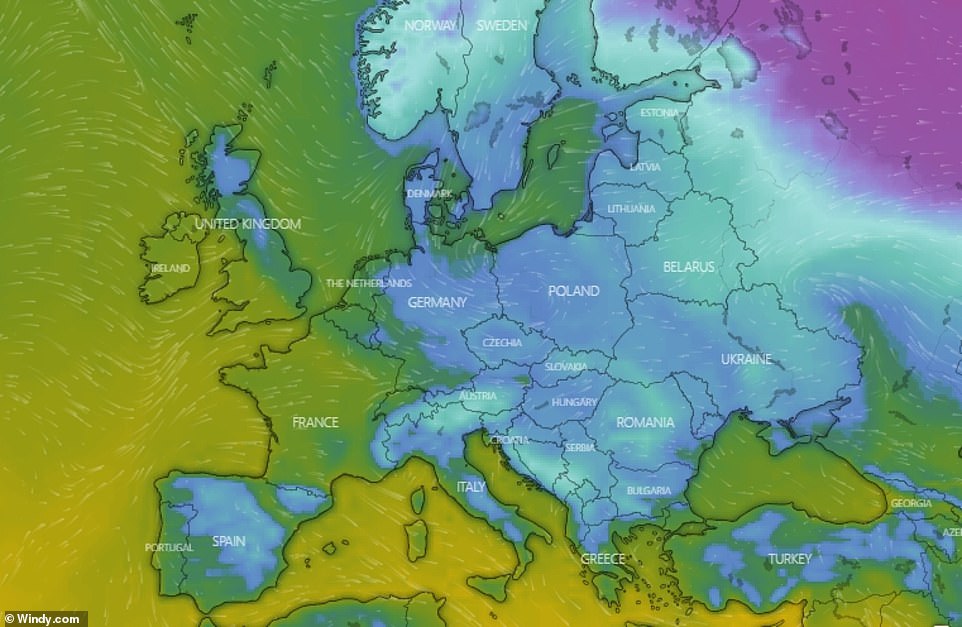 The cold weather in Europe – shown here are predicted temperatures in the night from Wednesday to Thursday, with the blue areas below zero degrees Centigrade and the purple areas colder still – comes amid fears of a second ‘Beast from the East’

Forecasters in Britain have raised fears of a second ‘Beast from the East’ to match the dramatic weather in February 2018 when a ‘sudden stratospheric warming’ brought freezing winds from Siberia.

The bad weather arrived in Spain at the end of last week and has since spread across Europe, with temperatures expected to drop further before this weekend.

In Madrid, the lorry thieves made their move after the driver was forced to abandon his vehicle near a supermarket which he was unable to reach because of blizzards.

While the driver was offered a room for the night at a Good Samaritan’s nearby home, he later returned to his lorry to find locals ransacking the trailer – stealing an estimated 20,000kg of vegetables, yoghurt and drinks.

Footage of the extraordinary scene showed one man running through the snow with his arms laden with stolen goods as half a dozen women nearby walked away carrying heavy boxes.

At the end of last week Madrid suffered its heaviest snowfall since 1971 and sub-freezing temperatures from Sunday onwards have continued to cause chaos. The temperature at Madrid’s Barajas Airport dropped to -13C (8F) in the early hours of Tuesday morning, the lowest for 75 years.

Some drivers were trapped in their vehicles for more than 24 hours before they were rescued by an army unit called in to deal with the fallout from the extreme weather.

It came after at least three people died when Storm Filomena swept through the country at the weekend, and on Tuesday Barcelona officials confirmed another two people, both homeless, had been found dead, with signs suggesting they died of hypothermia.

Madrid politicians have called on Spanish government to declare the nation’s capital a disaster zone, which Spanish media says is likely to happen. 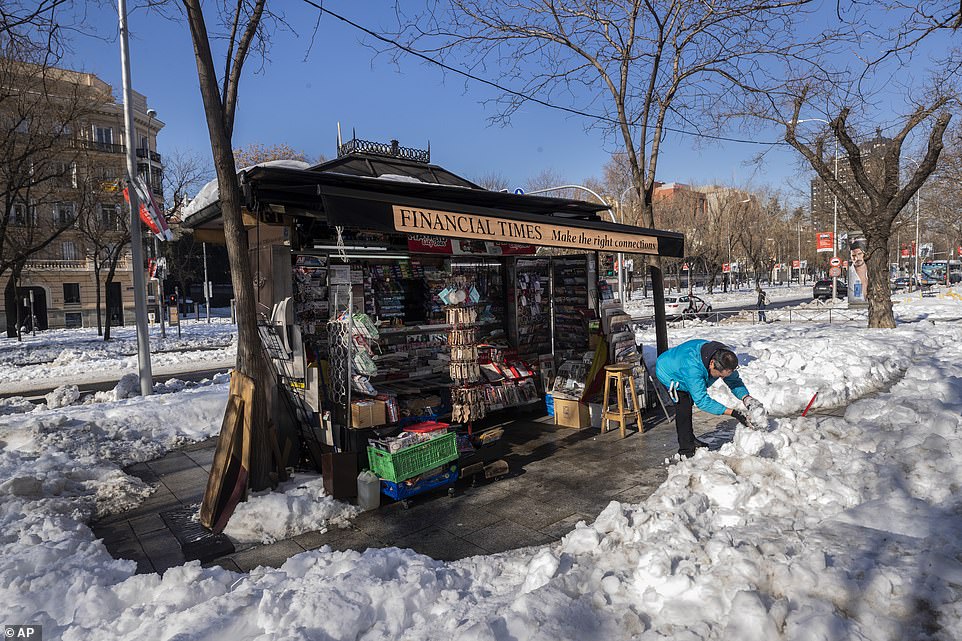 SPAIN: Newspaper seller Ramon Montiel clears the snow to make space for customers around his kiosk in Madrid today 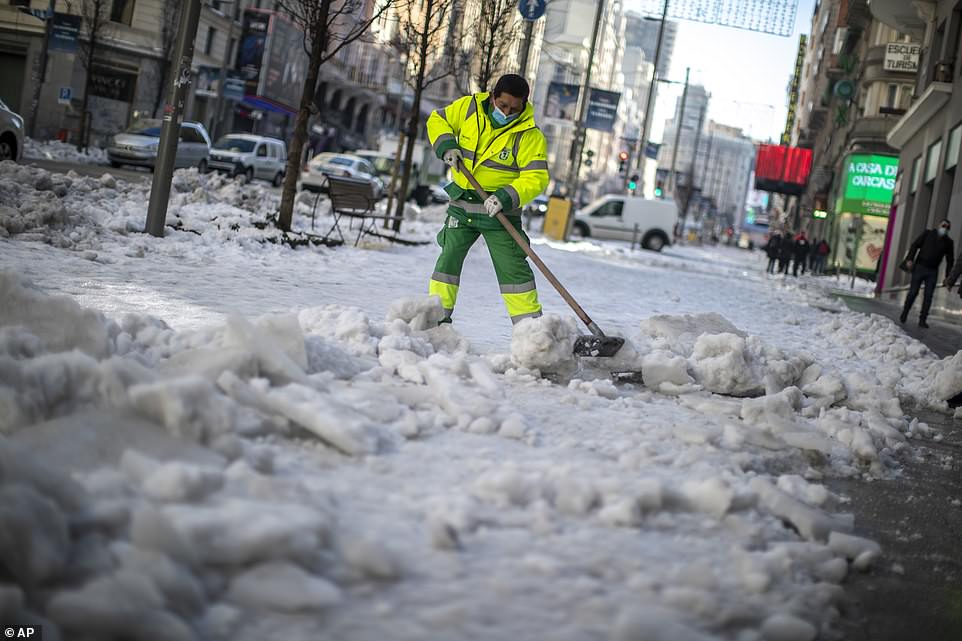 SPAIN: A municipal worker clears the snow on the Gran Via Avenue in Madrid today amid freezing weather across Europe 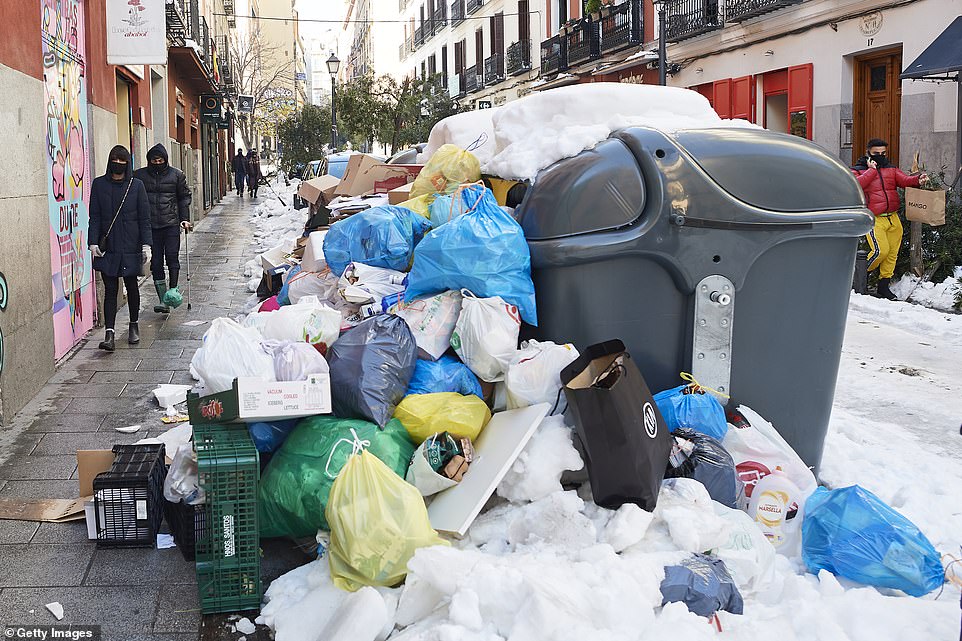 SPAIN: Garbage is piled up on a snow-covered road in Madrid today after Storm Filomena brought chaos to the country 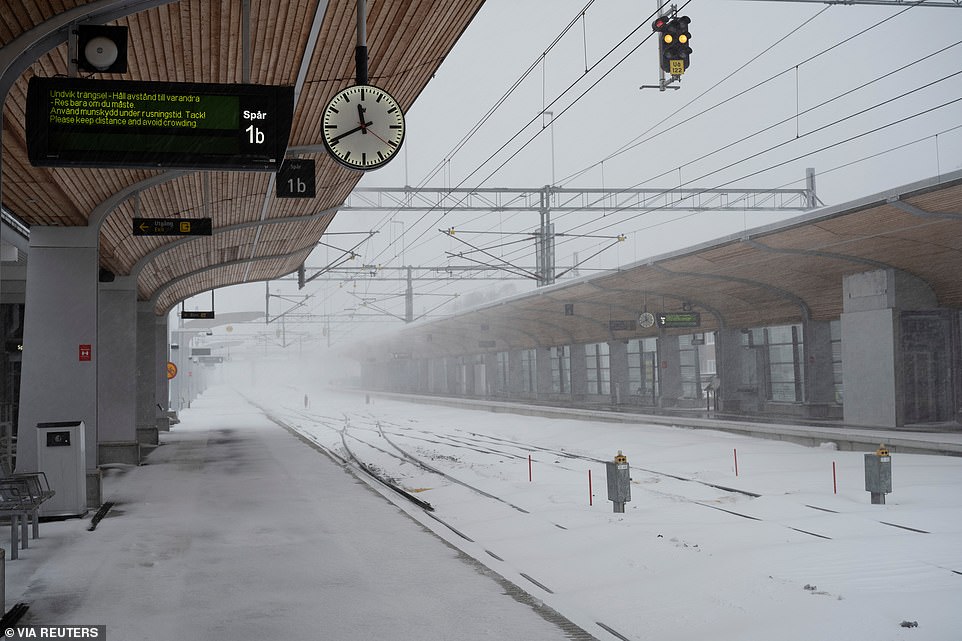 SWEDEN: A view of an empty platform in Umea after many trains were cancelled because of the severe weather conditions 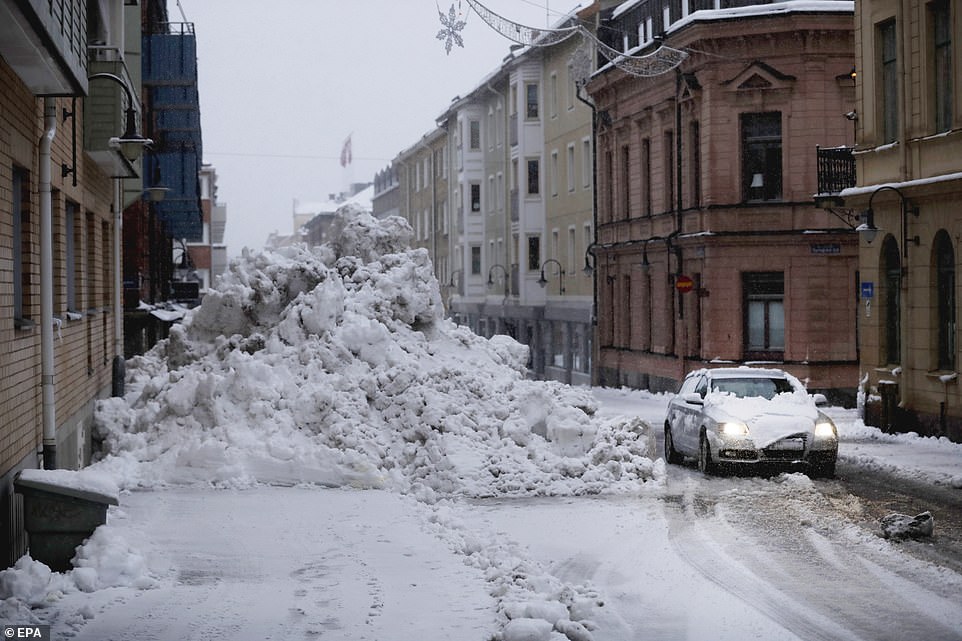 SWEDEN: A car drives by a mountain of snow in the centre of Sundsvall in northern Sweden amid heavy snow on Tuesday 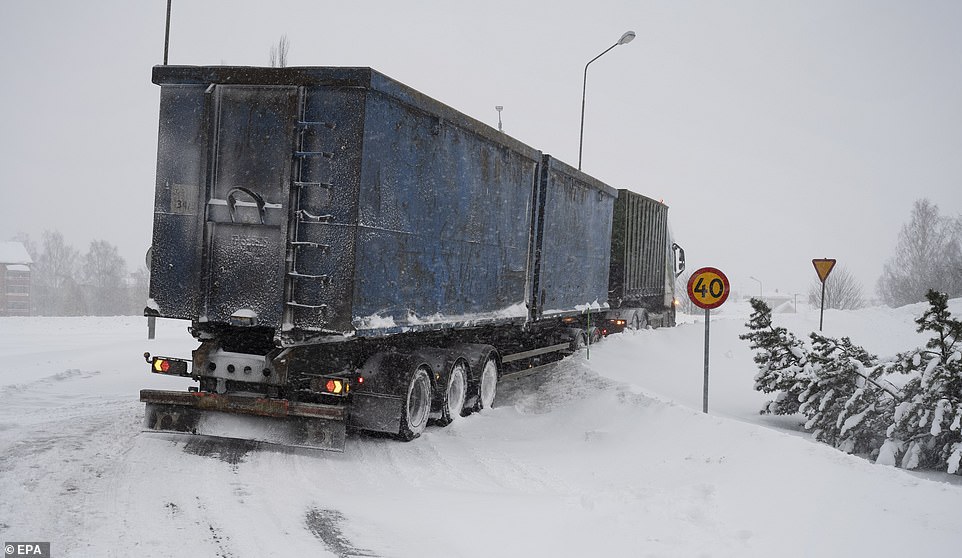 SWEDEN: A lorry was stuck during a snow storm in Umea as large parts of Scandinavia saw dramatic weather conditions

In Sweden, the snow was still piling up today after 24 hours of snowfall in the north of the country – although forecasters said it was finally slowing down.

Electricity provider Eon said around 3,000 homes were without power, adding that the blackouts may go on longer than usual because it is too risky to send out maintenance workers.

The Swedish Meteorological and Hydrological Institute reported snow accumulation of up to 24 inches in the north of the country.

In neighbouring Finland, snow blanketed the south and warnings of poor road conditions have been issued across large swathes of the country.

In Germany, an 18-year-old man died at the roadside near the town of Süderholz last night after his vehicle swerved on the icy road, crashed into guardrails and finally into a tree.

Another passenger was badly injured in the crash – while several others were hurt in separate accidents around Germany, according to local media. 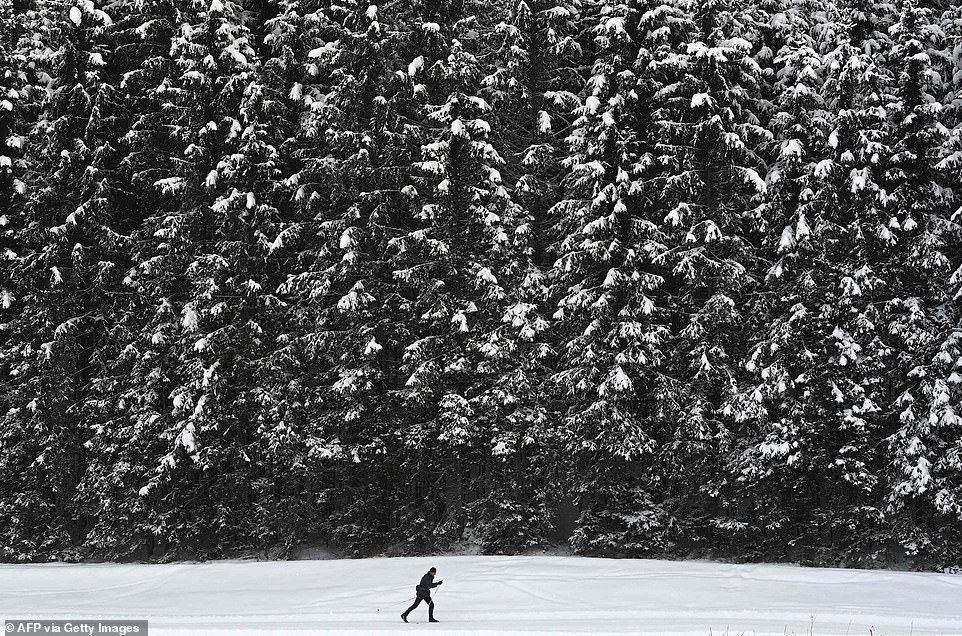 GERMANY: A cross-country skier makes his way through the snow-covered landscape near Garmisch-Partenkirchen on the Austrian border on Wednesday 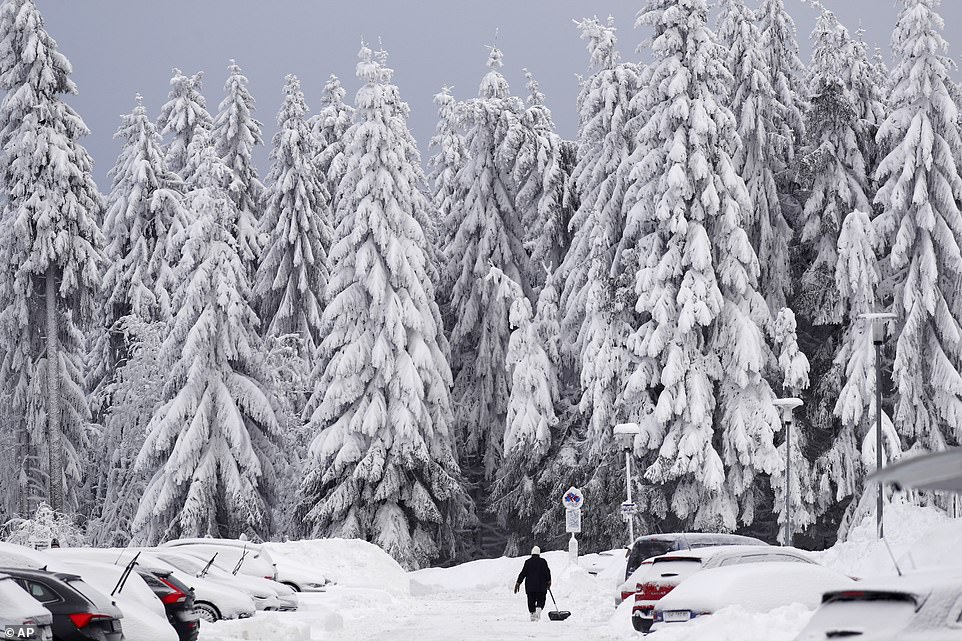 GERMANY: A woman removes snow from in front of her house on Wednesdat after the snow nearly buried vehicles in Oberhof 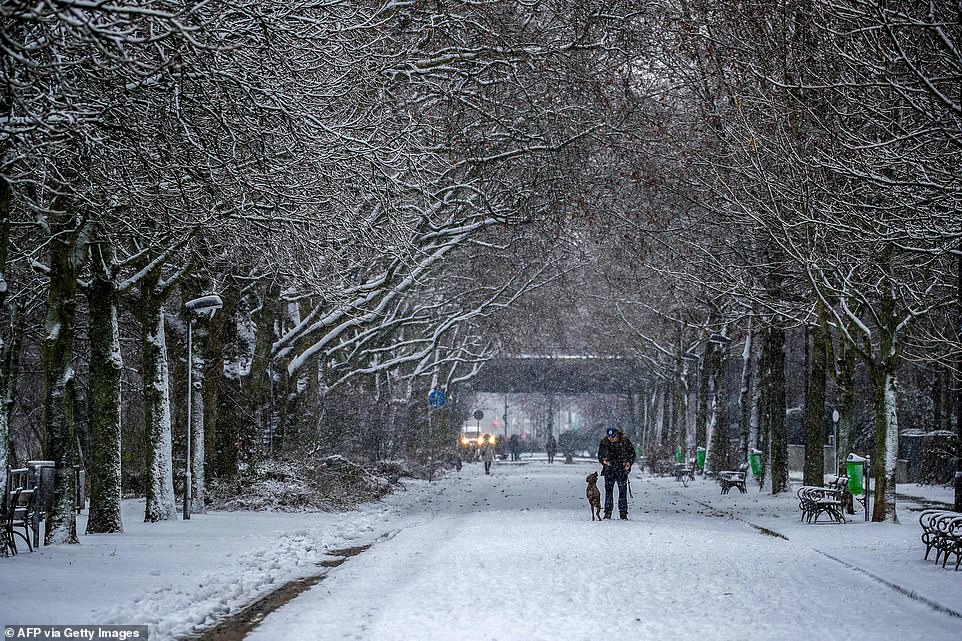 GERMANY: A man walks his dog in a park in Frankfurt with snow covering the pathways and trees on Tuesday

Meanwhile in Switzerland, parts of the Alps were raised to a Level 4 avalanche warning by Swiss authorities, meaning the situation is ‘very critical’ and that ‘very large’ landslides are ‘likely’.

On Tuesday, police in Bern revealed they had received 50 reports of road accidents between 12pm and 6pm, in which at least five people were injured in wintry conditions.

Another 30 were recorded overnight, leaving another three people hurt, with snow warnings in place in the country until at least Friday.

Elsewhere, blizzards and strong winds were expected in Poland, with forecasters expecting temperatures to drop especially low in the Baltic region in the coming days.

Up to 16 inches of snow could fall in parts of Poland, where temperatures could drop as low as -20C (-4F) in the night from Thursday to Friday, according to Polish media.

And in the Czech Republic, the snowfall was such that crowd of people took to the mountains to do some freestyle skiing while the resorts are closed because of coronavirus. 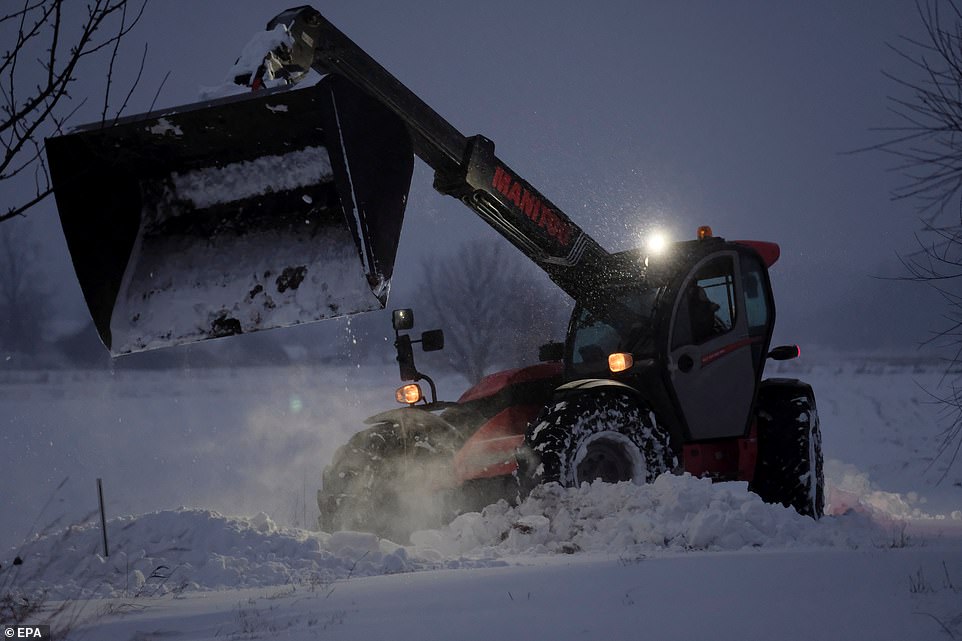 LATVIA: A tractor clears snow from a road in Liepupe early this morning, with the Baltic region facing very cold weather 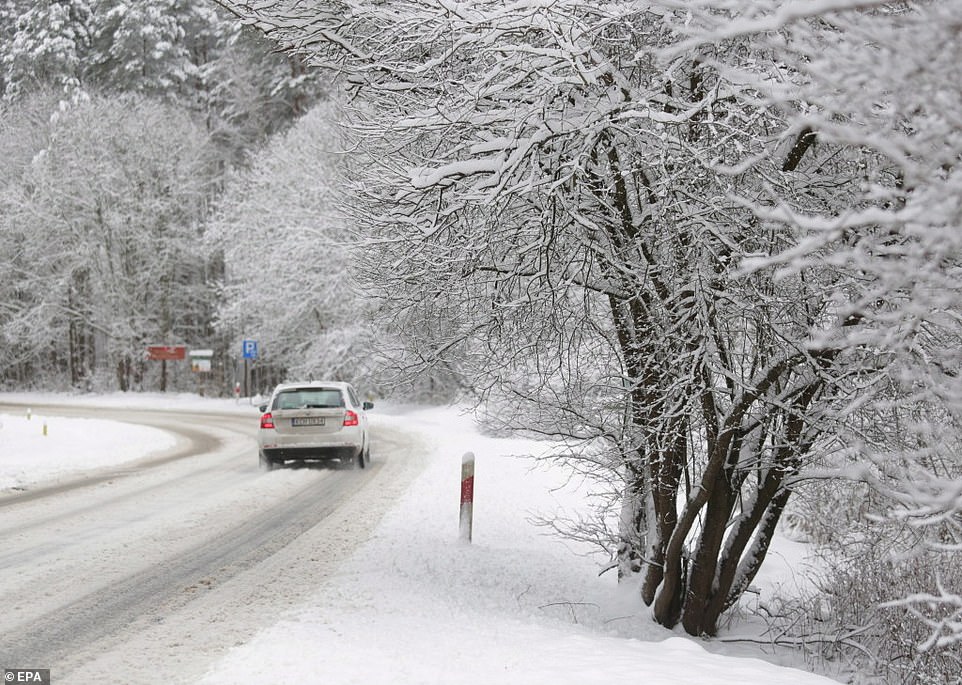 POLAND: A snow-covered road after overnight snowfall in the town of Nowa Wies today, with blizzards said to be on the way 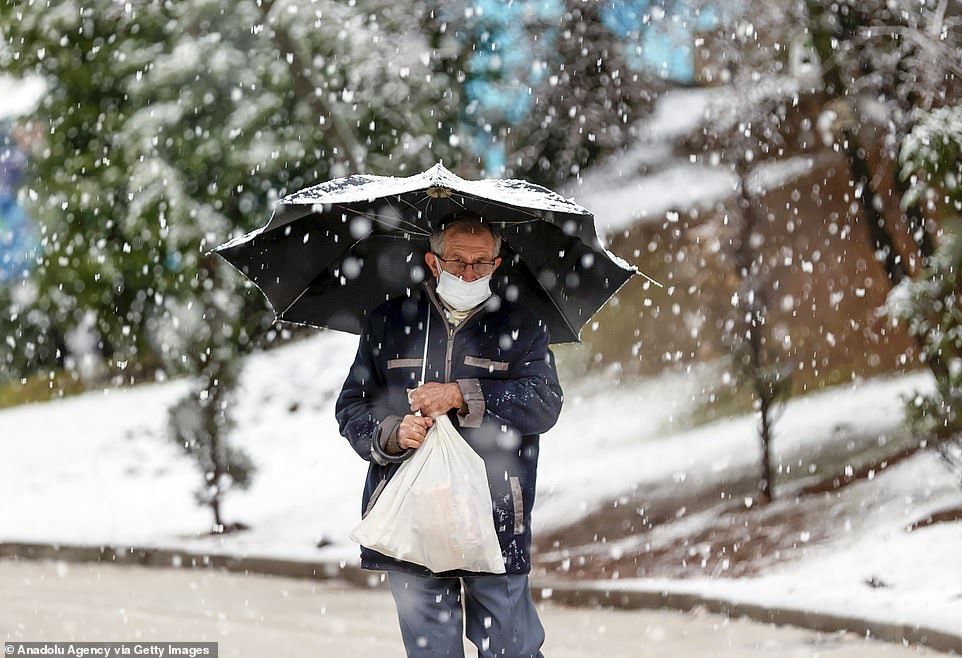 TURKEY: A man walks with an umbrella during snowfall in Ankara on Wednesday which came after heavy storms in Turkey

Covid US: Joe Biden promises 'wartime effort' to get vaccine to 100m 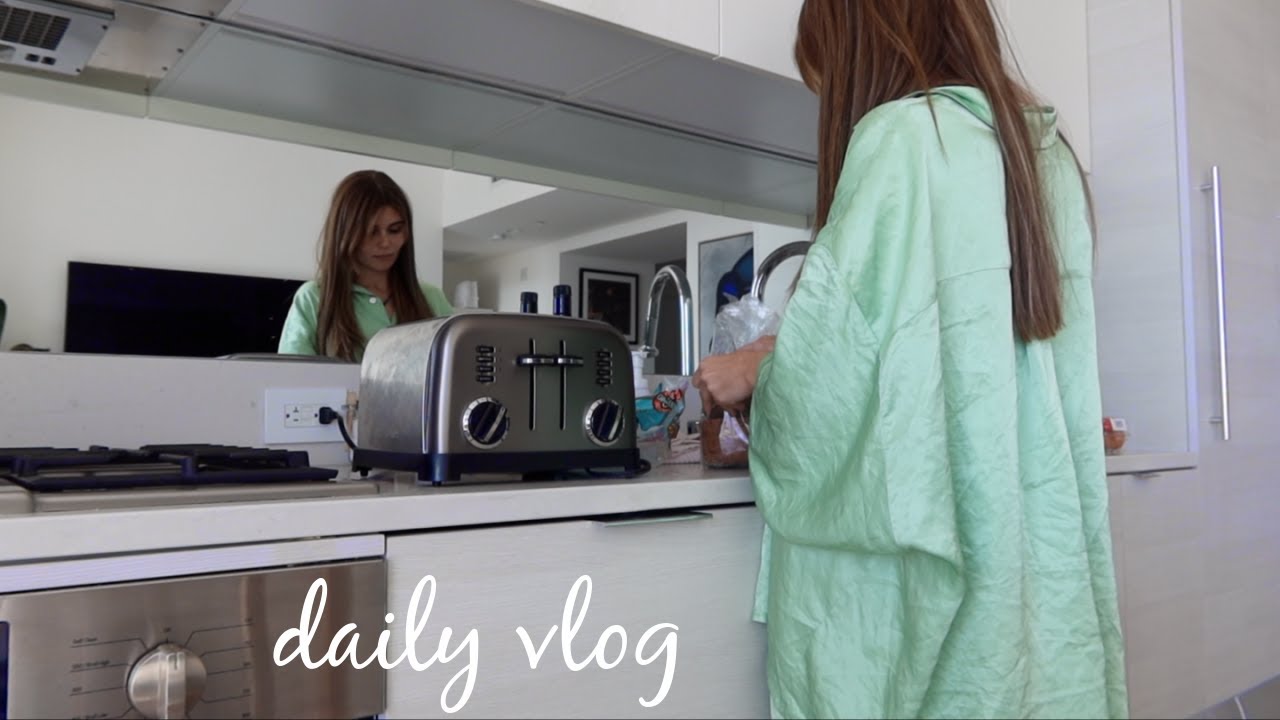 Olivia Jade Giannulli returns to YouTube after college bribery scandal: I 'want to move on'

Covid US: Joe Biden promises 'wartime effort' to get vaccine to 100m 0

Olivia Jade Giannulli returns to YouTube after college bribery scandal: I 'want to move on' 0

As a new film tells their story, TOM LEONARD looks back on Lucille Ball's life 0

High blood pressure: Nosebleeds could be a strong indication you’re at risk of hypertensio 0