Elon Musk has torn into the ‘West Coast high tech’ who have turned into the ‘de facto arbiter of free speech’ after Amazon scrubbed Parler from the internet.

The Tesla and SpaceX CEO had replied to a satirical tweet about Twitter and Facebook banning Donald Trump from their platforms. Twitter also permanently banned Trump loyalists as part of a broader purge of accounts.

Musk said Monday: ‘A lot of people are going to be super unhappy with West Coast high tech as the de facto arbiter of free speech.’

Replying to another user who said ‘West Coast high tech has to make the distinction between banning hate speech and banning speech it hates’, Musk added: ‘This is an important distinction.’

Parler went offline shortly after 3am EST Monday after Amazon booted the platform off its web hosting service, effectively shutting the site down until it can find a new hosting partner or fund its own servers.

It had already vanished from the Apple and Google app stores after they cut ties with the platform in the wake of the deadly mob attack at the US Capitol.

The site later said it would sue Amazon Web Services (AWS) over the decision. Amazon said the lawsuit has ‘no merit’, arguing it ‘is clear that there is significant content on Parler that encourages and incites violence against others’.

CEO John Matze, who launched the app in August 2018, said that he has been receiving death threats since his social media platform was thrust into the spotlight. ‘People are threatening my life,’ he said. ‘I can’t go home tonight.

The social media crackdown has revived a debate over whether tech giants should be treated as ‘publishers’ with the same liability as news providers.

Critics have slammed the move as a purge on free speech and pointed to Amazon ‘holding the keys to the internet’. 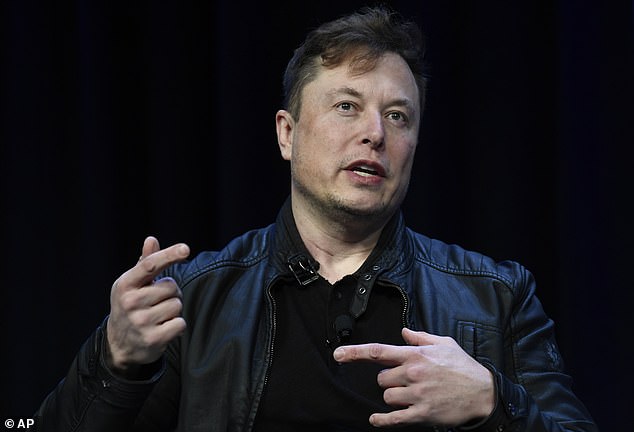 Matze told Fox News’ Tucker Carlson that it was ‘scary’ how comprehensive his blacklisting had been, and how quick.

‘You just never think it will happen, right?’ Matze told Carlson. ‘You know?

Secretary of State Mike Pompeo on Monday slammed tech titans for ‘authoritarianism, cloaked as moral righteousness’ during his speech on the broadcaster Voice of America.

Censorship, wokeness, political correctness, it all points in one direction – authoritarianism, cloaked as moral righteousness. It’s similar to what we’re seeing at Twitter, and Facebook, and Apple, and on too many university campuses,’ Pompeo railed.

‘We are all parts of institutions with duties and responsi

Discussing the removal of Parler from AWS, American Civil Liberties Union lawyer Ben Wizner told The New York Times: ‘There is a difference between a social media platform like Twitter…deciding who its members are and what its guidelines should be, and a company like Amazon that really hold the keys to the internet.’

Wizner also pointed to a 2017 quote by CloudFlare CEO Matthew Prince when he took down The Daily Stormer who said: ‘I woke up in a bad mood and decided someone shouldn’t be allowed on the internet… No one should have that power.’

‘But, it should concern everyone when companies like Facebook and Twitter wield the unchecked power to remove people from platforms that have become indispensable for the speech of billions.’

Amazon was on Saturday forced to warn its employees to ‘be vigilant’ following far right threats to blow up its data centers, a leaked memo reveals.

In an email to staff Saturday, Chris Vondehaar, Vice President of Infrastructure at Amazon Web Services (AWS), said: ‘We all need to [be] vigilant during this time to keep one another and our facilities safe.

‘If you see something, say something — no situation or concern is too small or insignificant.’ 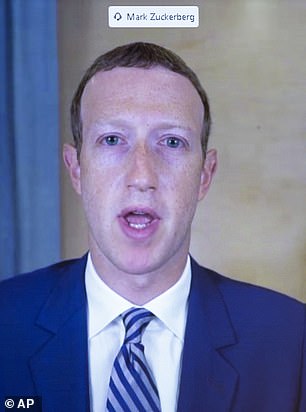 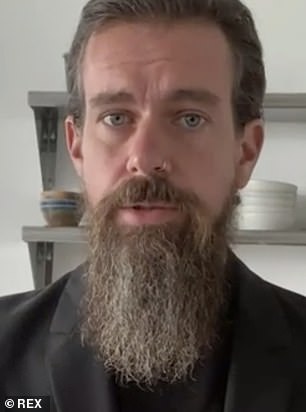 Amazon has also blocked service updates on their systems in an effort to avoid a cyber attack by those upset at the decision to remove the right leaning social media site used by Donald Trump fans.

Fox New host Jeanine Pirro argued Parler’s deplatforming ‘is akin to a Kristallnacht’. In 1938, Nazis in Germany and Austria vandalized Jewish homes, schools and businesses during an attack that became known as Kristallnacht.

She said: ‘They gave us a taste of this pre-election when they suppressed the Hunter Biden story. And now that they’ve won, what we’re seeing is a kind of censorship that is akin to a Kristallnacht, where they decide what we can communicate about.’

Pirro later clarified in a tweet: ‘Although book burning started earlier, Kristallnacht included the destruction of Jewish stores, homes & synagogues containing rare Jewish books & Torahs. My reference was in context of books.The Holocaust was the greatest hate crime the world ever tolerated. I abhor all violence.’ 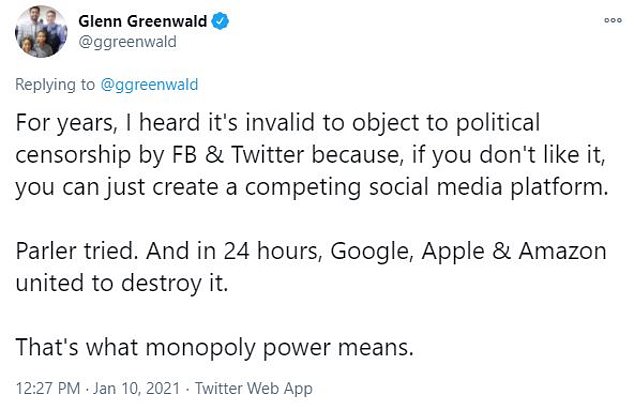 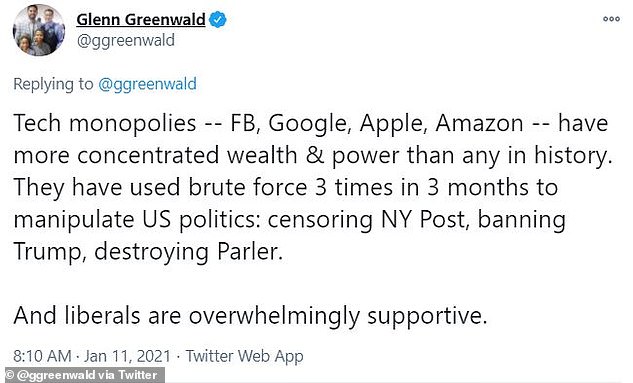 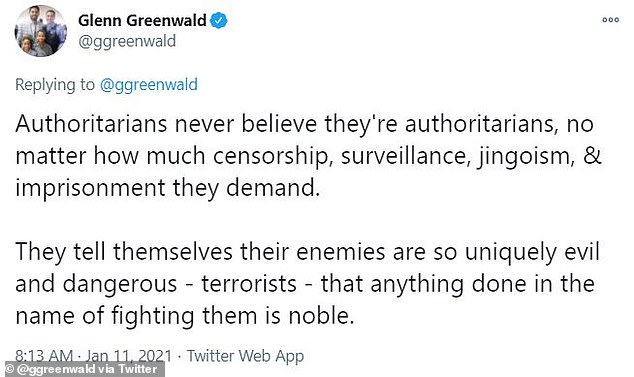 The president’s eldest son Donald Trump Jr. said it was a ‘purge of conservative ideas and thought leaders.’

Piers Morgan wrote: ‘It has been quite sinister to witness the speed in which the tech world has conspired to use the Capitol riot to silence not just Trump but entire right-wing social media platforms like Parler which has been effectively driven offline by Google, Apple and Amazon.’

And journalist Glenn Greenwald on Sunday accused the tech giants of ‘feigning offense to destroy’ to Parler. He claimed ‘far more violence’ has been planned on Facebook. 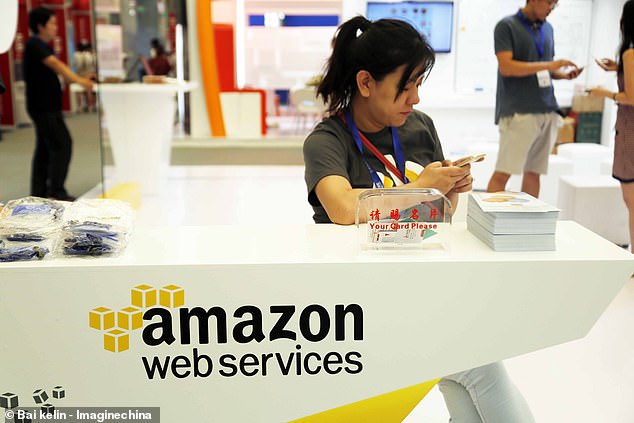 Amazon has warned its employees to ‘be vigilant’ as it faces threats to blow up its data centers after banning far-right social media site Parler, a leaked memo reveals (stock image) 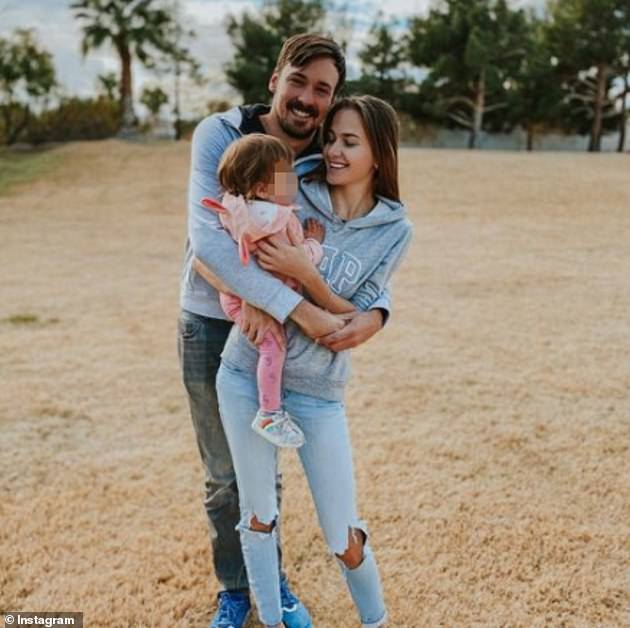 John Matze founded Parler in 2018 as a ‘free-speech driven’ alternative to mainstream platforms. He is pictured with his family. Amazon has warned its employees to ‘be vigilant’ as it faces threats to blow up its data centers after banning the far-right social media site

Shortly after 3am EST, Parler disappeared from the web with an error message saying ‘we can’t connect to the server’ after Amazon pulled the plug

‘That these Silicon Valley monopolies are grave menaces to political freedom & economic well-being is *not* a right-wing view.

‘Authoritarians never believe they’re authoritarians, no matter how much censorship, surveillance, jingoism, & imprisonment they demand. They tell themselves their enemies are so uniquely evil and dangerous – terrorists – that anything done in the name of fighting them is noble.’

German Chancellor Angela Merkel’s spokesman called it ‘problematic’ that free speech could be obstructed by ‘decision of the management of social media platforms’.

Drinking two cups of oolong tea a day can help your body burn fat while you sleep, study claims  0

Mister Rogers' wife Joanne dies at the age of 92 0