Ellie Goulding is PREGNANT! Singer and husband Caspar Jopling reveal their secret baby joy and will welcome first child in just a few

Ellie Goulding has revealed she is eight months pregnant with her first child.

The singer, 34, who married Caspar Jopling, 29. in 2019, told Vogue on Tuesday, she fell pregnant while on a trip celebrating her one-year anniversary.

Ellie’s last major public appearance was at the V&A Museum last August but she was unaware she was expecting at the time and she has kept a low-profile in lockdown.

She said: ‘We did the one show. I was pregnant and had no idea. That was [around] the time when Caspar and I went away briefly when we were allowed to for our one-year anniversary, and that’s basically when we found out. 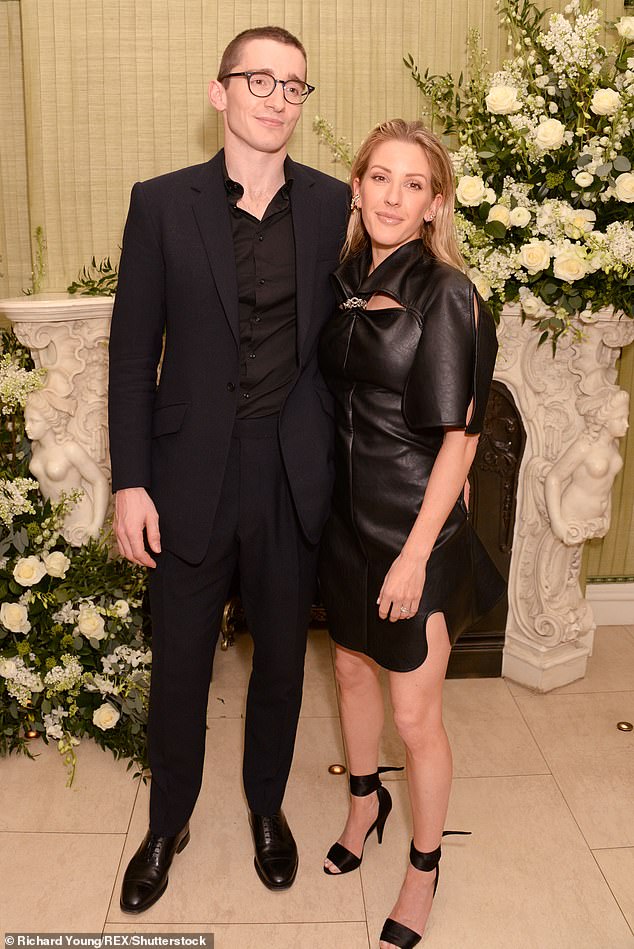 ‘It was crazy because it was our one-year anniversary. That was not the plan. The thought of getting pregnant didn’t seem like it could be a reality.

‘Becoming pregnant kind of made me feel human. I want a better word than womanly, [but]—I have curves I’ve never had before. I’m enjoying it. My husband’s enjoying it.’

Ellie said she had been enjoying a good streak of fitness before finding out the happy news and said she ‘started having a completely different body and different energy.’

Congrats! Ellie revealed she was two months pregnant when she performed at the V&A in August last year, but didn’t know it yet – this was the last major event she attended

She said she went from being a smug health freak to craving McDonald’s.

But while she does know the baby’s gender ‘by default’ when she had the scan, she admits she wasn’t in having any sort of gender reveal and just wanted a healthy baby.

I do: Ellie and Caspar tied the knot at York Minster in August 2019 – she fell pregnant while celebrating their one year anniversary

There were also rumoured relationships with Ed Sheeran and even Prince Harry.

Speaking to PEOPLE, she said: ‘Twenties was just a disaster in so many ways. I had these relationships at the time that were everything.

‘A couple years later, I’m like, “Why did I waste their time and mine by thinking it was something more than it was?”.

Ellie and Jasper met in 2016 after they were seated next to each other at a dinner arranged by their mutual friend, Princess Eugenie.

The pair got married at a star-studded wedding at York Minster in August 2019, attended by everyone from the Duchess of York Sarah Ferguson to the actress Sienna Miller and singer Katy Perry.

Her husband was educated at Eton and Harvard, and is the son of an aristocratic Yorkshire landowner and the nephew of art dealer Jay Joplin.

Going strong: Ellie and Jasper met in 2016 after they were seated next to each other at a dinner arranged by their mutual friend, Princess Eugenie (Pictured in 2019)

Democrats set to introduce bill that provides $3,600 per child for some families: report 0

Texas was 'seconds and minutes' away from 'monthslong' power outages, ERCOT's CEO says 0