Alex Beresford beatboxes as he returns to GMB 10 days after row with Piers Morgan
Alex Trebek gets loving tribute from his daughter, 54, on the three-month anniversary of his death
GMB's Alex Beresford QUITS social media amid 'relentless racist abuse' after Piers Morgan on-air row

The A&E doctor, 30, admits meeting Boris Johnson at No10 this week was a ‘pinch me moment’ but he now feels ‘the pressure is on’ to make changes in his new role.

In an exclusive interview, Alex told MailOnline he’s been ‘overwhelmed’ by the outpour of support after initially fearing the public’s reaction – and says he’s even been congratulated by the likes of healthy food campaigner Jamie Oliver, 45. 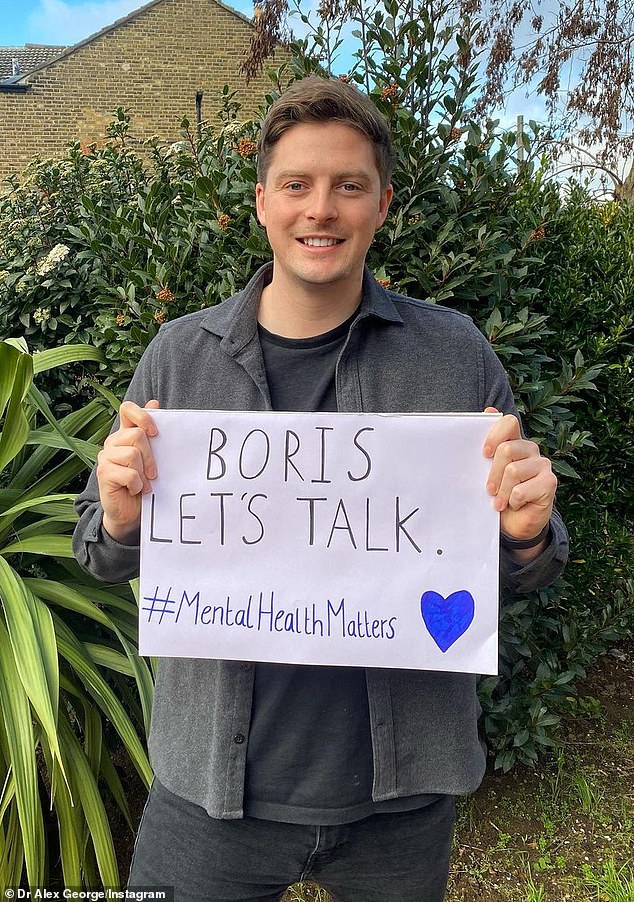 ‘I want to make changes’: Dr Alex George says his family are drawing ‘positives’ from his brother’s tragic suicide as the former reality star is appointed youth mental health ambassador

Speaking about the reaction from his parents, Alex, who’s collaborated with California Almonds to raise awareness of heart disease in women, said: ‘They are very proud.

‘We are never going to get over what happened with my brother. To have something positive come from it feels amazing. It really, really does.

‘They’re just proud really that I can do something positive. It isn’t a PR stunt – I want to actually make some changes. The pressure is now on.

‘I didn’t know how people were going to react, obviously there are people that have multiple letters after their name and I’m just someone that wants to help and it sounds cliché but I do just want to be able to do my bit.

‘But I’ve had such overwhelming support from doctors in the area, experts, students and teachers, the general public. Jamie Oliver congratulated me; it’s just amazing.’ 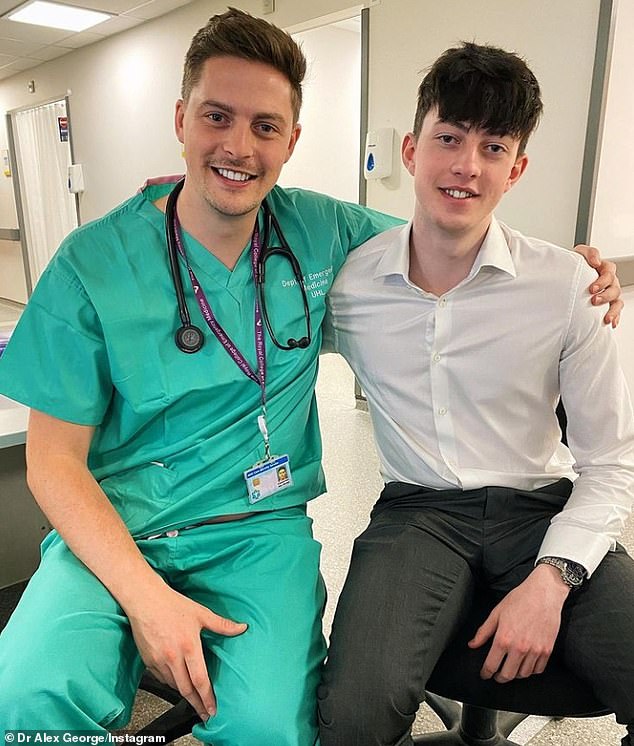 ‘We are never going to get over what happened’: Alex suffered the devastating lost of his brother Llŷr, who took his own life aged 19, weeks before he was due to begin medical school 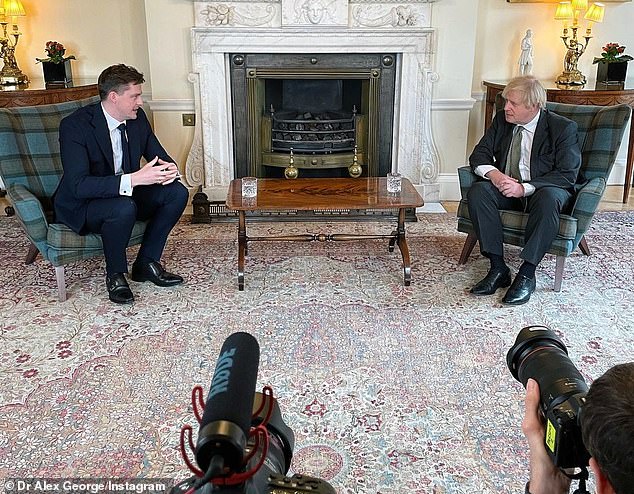 ‘It was really unbelievable’: The A&E doctor admits meeting Boris Johnson at No10 this week was a ‘pinch me moment’ but he now feels ‘the pressure is on’ to make changes in his new role

In July, Alex suffered the devastating lost of his brother Llŷr, who took his own life aged 19, weeks before he was due to begin medical school.

On New Year’s Day, Alex announced to his 1.6million Instagram followers that his ‘number one goal is to help bring meaningful change to mental health education at schools across the UK.’

He explained: ‘When I launched it on January 1 I didn’t think it would go this far to be sitting down with the prime minister discussing my job role as a youth mental health ambassador, I just can’t believe it.

‘I’m a boy from west Wales, I wasn’t meant to be in there! It was really unbelievable.

‘I sat in what used to be Margaret Thatcher’s meeting room and there was a painting of her just over the desk where we were speaking. We spoke for about 20-minutes together before we made the recording.

‘We sat, we spoke and it was an unbelievable moment to sit opposite the prime minister, who’s the busiest person in the UK right now, it was a pinch me moment.’ 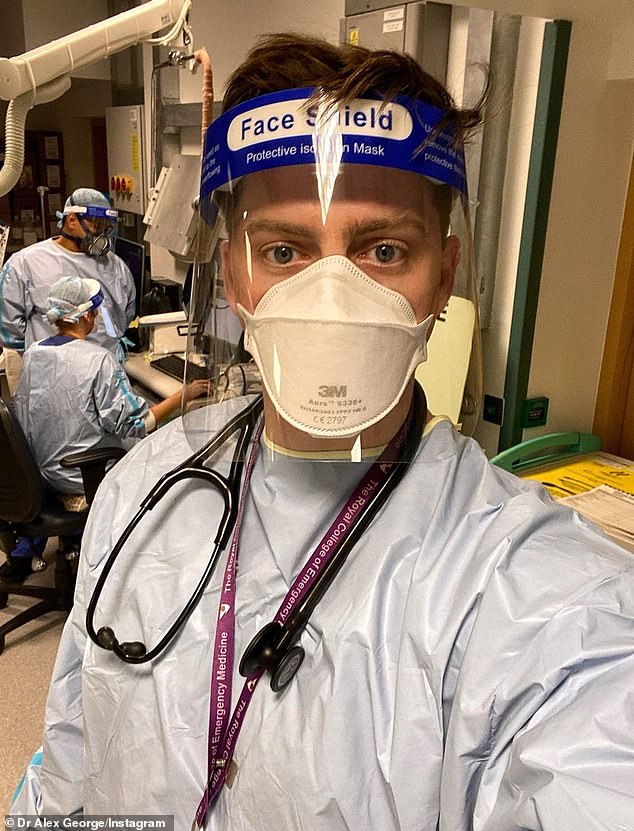 ‘It does feel very odd’: Alex, who has been working tirelessly on the front line during the pandemic, said his appearance on dating series Love Island feels like another lifetime

Alex, who aims to highlight the small preventative changes you can make to reduce heart-related illnesses, says his stint on ITV2 dating show Love Island feels like another lifetime.

He said: ‘It does feel like a long time ago. All of us feel that our previous life was a long time ago but I do realise that gave me this platform and I wouldn’t be here doing this if it weren’t for that.

‘It does feel very odd and it feels like a different life to be honest.’

Alex has teamed up with California Almonds after they conducted a survey that revealed 84 per cent of British women are unaware that heart disease is the number one cause of death, killing more than twice as many as breast cancer.

The doctor explained that small tweaks to your diet, such as regularly eating a portion of almonds, could help to maintain a healthy heart and cholesterol levels.

Alex said: ‘February is heart health month and I was interested in collaborating with the Almond Board of California because the focus of this is on women’s heart health.

‘Classically, it’s talked about with the stereotypes of middle-aged men with heart attacks and cardiovascular disease but it’s not true that it’s just men at all. We are trying to spread awareness among women of the potential risks of heart disease.

‘Around 84 per cent of women are actually unaware that it’s one of the biggest killers of women in the UK and that’s quite worrying because what that means in a sense is that women are unaware that taking care of your heart health is vital.

‘There are lots of ways to make improvements, exercise, sleep, stress levels, how you take care of yourself – diet.

‘I’m bias as well because I love almonds and they’re really handy in A&E, I bring a pot of them and it’s an easy snack to have in the day. You can make small changes that ultimately make a difference.’ 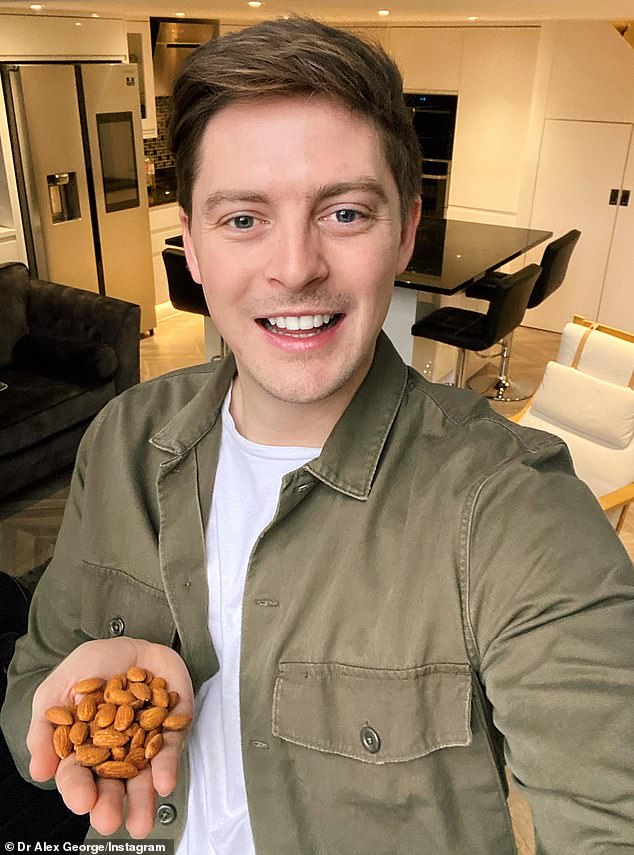 Work: Alex has collaborated with California Almonds to raise awareness of heart disease in women and the small preventative changes you can make to reduce heart-related illnesses