A dog owner in China has called her puppy 'smart' after the pet used a cushion to cover his own pee when his owner was asleep.The woman said she wa

Hilarious moment baby pretends to be asleep after her mother catches her messing around at naptime
Burglar found asleep in pub after he broke in, helped himself to drink and caused extensive damage
Ever fallen asleep in front of Netflix? Latest Android update suggests you’re not alone


A dog owner in China has called her puppy ‘smart’ after the pet used a cushion to cover his own pee when his owner was asleep.

The woman said she was amazed to watch the security footage of her pooch dragging his sleeping pad onto the sofa in the early hours.

Although the owner believed that the five-month-old pet was trying to hide his waste to evade punishment from her, experts advised that the puppy could be marking his territory or creating a secure hideout due to canine instinct. 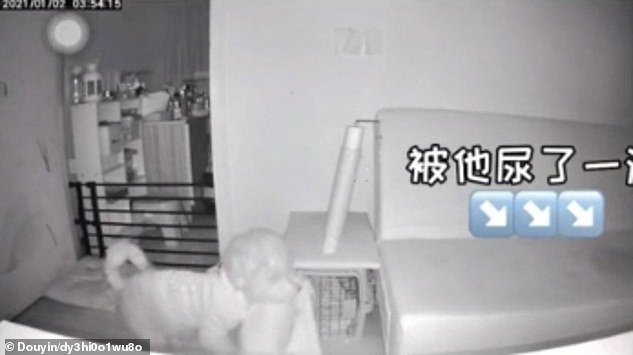 Oreo, a Bichon Frise mix living in the Chinese city of Nanjing, has been caught on camera trying to cover his pee with his bed. The pet’s owner has called the five-month-old pup ‘smart’

Ms Li told MailOnline that she adopted the pet after finding him abandoned in a public bin one day after he was born.

She described her beloved pet as outgoing, energetic and naughty.

Oreo was caught on camera trying hard to drag one of his beds from the floor to the sofa after soiling his owner’s furniture in the early hours of January 2.

Ms Li said she watched the video to find out why her dog’s favourite mattress had mysteriously ended up on the couch instead of remaining on the floor. 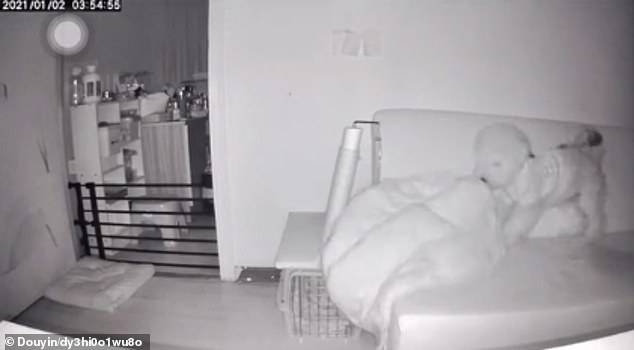 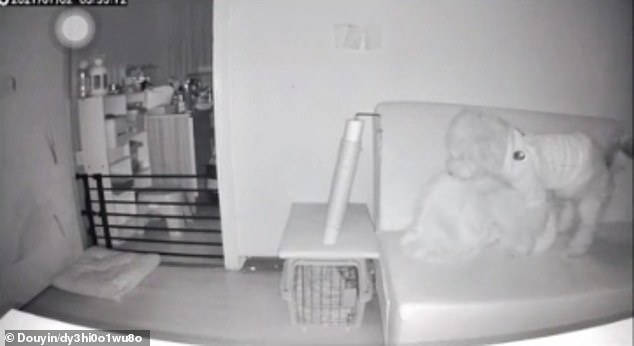 Security footage shows the dog attempting to jump onto the sofa while carrying the cushion with his mouth.

After failing to do so, he jumped onto the couch and tried to pick up the cushion with his mouth.

He took a break after realising the mission was more than challenging.

Oreo eventually pulled up the mat with his paws and successfully moved it on top of his pee stain.

Ms Li said she felt confused when she saw the dog bed on the sofa the next morning. Therefore, she checked the surveillance footage to find out what had happened.

‘I felt angry and amused at the same time when I was watching the video,’ Ms Li told MailOnline.

‘I was angry because he had been naughty and pissed on the sofa. But I also felt he was so smart to cover the area with something. I found his action very cute.’

The dog owner said she had ‘educated’ Oreo several times in the past for peeing on the sofa. She believed that was the reason the puppy acted like this in the video.

She added that she did not punish Oreo this time. 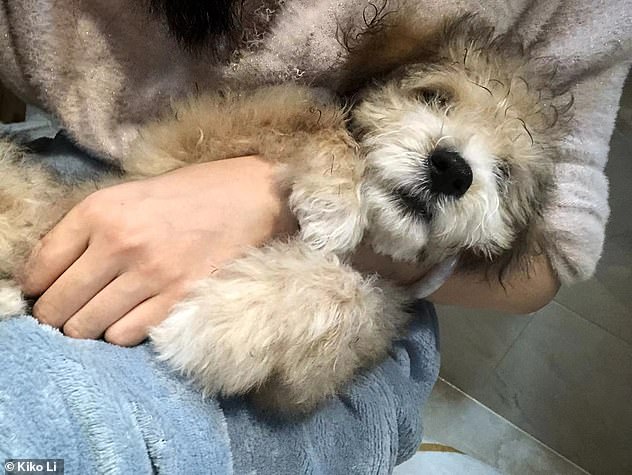 The dog’s owner said she felt confused when she saw Oreo’s bed on the couch after she got up. So she checked the surveillance footage to find out what had happened to the dog (pictured) 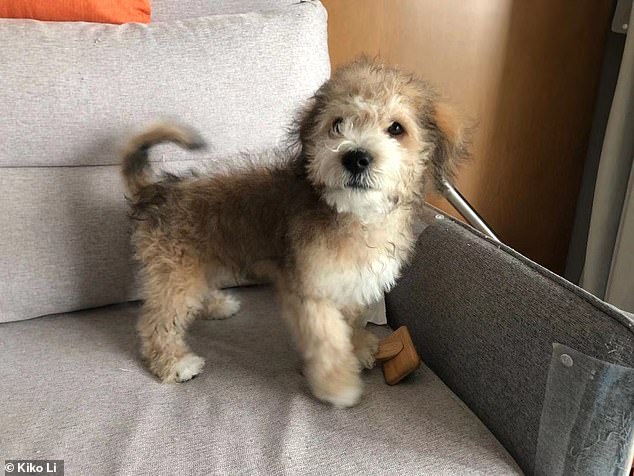 The owner said she had ‘educated’ Oreo (pictured) for peeing at home, and that was likely the reason Oreo acted like this in the video. She called the pet outgoing, energetic and naughty

Contrary to Ms Li’s assumption, dogs often cover their pee, especially when they are outside, because it’s a primal instinct for them.

Dog hide their waste with leaves, sticks, soil, or other natural materials to avoid being hunt down by their enemies or mark their territory, according to Wag!, a US-based website focussing on veterinary care and training services.

UK-based animal behaviourist Caroline Clark thought that Oreo was probably creating a ‘protective fort’ for himself to mark his territory.

She told MailOnline: ‘It is more likely that he woke up (probably because he needed to have a pee). After going, he decided he wanted to get more comfortable and jumped up on the sofa, using its bed to create a warm, snugly place to rest.

‘It is possible that he was attracted to the scent of his own urine as it can be used to mark a dog’s territory.’

Another British animal behaviourist, Rosie Bescoby, suggested that Oreo’s behaviour could be a physiological response to panic or stress as his owner was not present.

She told MailOnline that anxious dogs might feel better ‘by surrounding their environment with their own scent and choosing to urinate in areas impregnated with the owner’s scent’.

Ms Bescoby also warned dog owners against punishing their pets over similar behaviours in their absence.

‘Telling the dog off on returning home will simply serve to increase the dog’s anxiety when left alone as they anticipate an unpleasant response when they owner returns, without addressing the underlying anxiety in the first place,’ she added.

'No plans to bring it to the floor': Pelosi shoots down Democratic effort to expand Supreme Court

'No plans to bring it to the floor': Pelosi shoots down Democratic effort to expand Supreme Court 0

Students must be allowed to return to campus, university chiefs tell Boris 0

Golden Globes 2021: Elle Fanning dazzles in satin blue gown as she poses up a storm 0