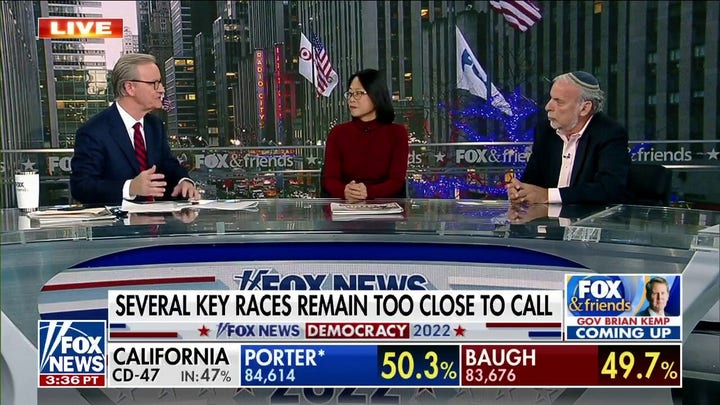 A Democratic supporter of Lee Zeldin said it is time for the GOP to “move on” from former President Trump following a disappointing night for Republicans in the midterm elections, which included Zeldin’s loss in the New York gubernatorial race.

Dov Hikind joined “Fox & Friends” Wednesday to discuss why he believes the election showed that Republicans should move on from the former president.

“We were all disappointed looking at the bigger picture. What happened was supposed to be great victories all over the country,” he told Steve Doocy.

The former New York State assemblyman said “part of the problem” of what hurt Republicans in the election was Trump’s unpopularity outside his base.

“I would say to the former president, who I supported and he did great things during his term, I would say to him, move on. A couple of days before the election, he tells the country he has a major announcement. Donald Trump, it was not about you. It was about the candidates that were running and you took away from them,” said Hikind.

“There’s no question that he hurt candidates all over the country.”

Hikind said he believes Trump’s upcoming announcement should be to support Florida Gov. Ron DeSantis for president in 2024.

“Donald Trump, you had your opportunity. You hurt your party that you love, and your country in this election,” he said, saying he believes Republicans will have a better chance without Trump in 2024.

Trump said if he formally announces a 2024 White House bid and is re-elected, he would return to the nation’s capital with experience and a new perspective, without having to rely on Washington insiders, and would build on his “unbeatable” America First record.

The former president sat for a wide-ranging interview on Trump Force One, a Boeing 757, Monday night with Fox News Digital and four other reporters after teasing during a rally in Dayton, Ohio that he plans make a “major” announcement from Mar-a-Lago on Nov.15, likely regarding the launch of his possible third presidential campaign.

On Tuesday, Florida saw Republican incumbents DeSantis and Sen. Marco Rubio achieve easy victories in highly watched races, thanks in no small part to several South Florida counties voting for the GOP in far greater numbers than in years past.

The change was most notably felt in historically blue Miami-Dade County, which flipped DeSantis’ way – the first time in 20 years the county went for a Republican governor.

Elizabeth Heckman is a digital production assistant with Fox News.