Delilah Hamlin posted sizzling photos to Instagram on Thursday where she was modeling a set of hosiery products from Kim Kardashian’s SKIMS line.

The 22-year-old social media personality – whose sister Amelia Hamlin dates Kourtney Kardashian’s ex partner Scott Disick – gave the camera her best look as she relaxed on a bed in front of an open book. 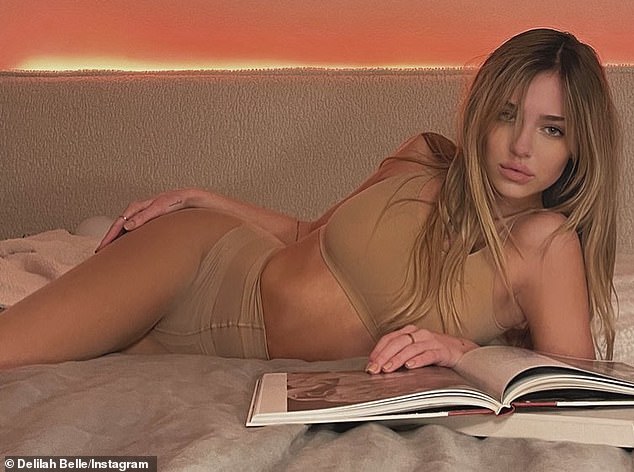 Hot stuff! Delilah Hamlin was featured in a set of promotional photos for Kim Kardashian’s SKIMS line, one of which was posted to her personal Instagram account 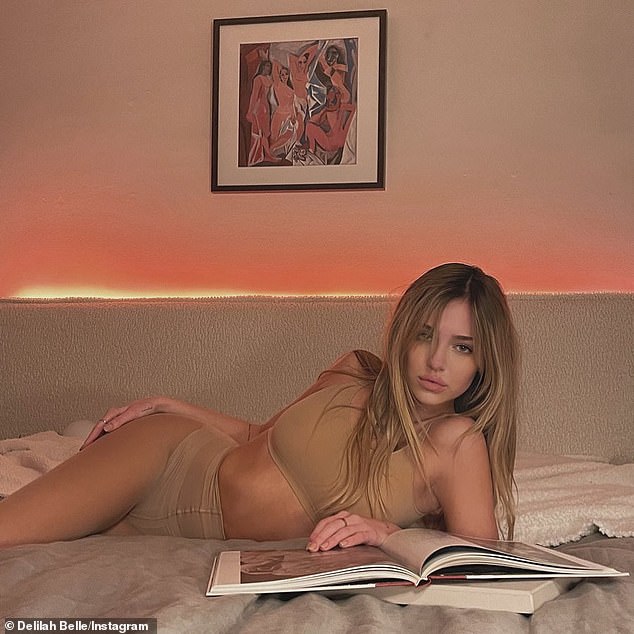 Reading time: The 22-year-old social media personality gave the camera her best look as she relaxed on a bed in front of an open book

Hamlin was seen wearing a nude-colored bralette that allowed her to show off her impressively toned tummy; she paired her top with a matching mid-waist brief during the photo shoot.

She donned a set of pantyhose to cover up her jaw-droppingly sculpted legs; the leg-covering products are set to have their wide release from the brand on Thursday.

The model allowed her gorgeous blonde hair to stay messy and fall down her shoulders for the shoot; she also accessorized with a set of simple rings. 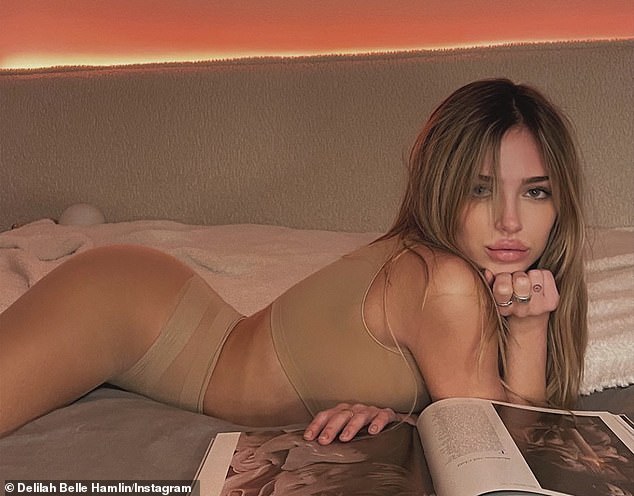 Looking good: The social media personality modeled numerous products from the shapewear brand and was also seen in a set of pantyhose from the line’s soon-to-be-released hosiery collection 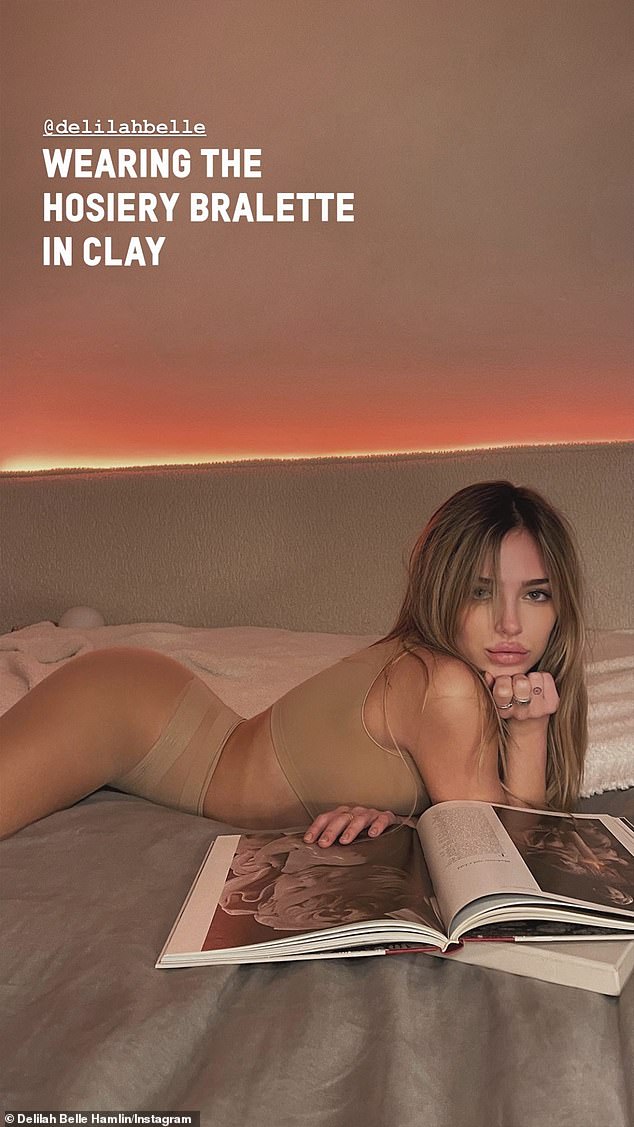 Glam time: The model allowed her gorgeous blonde hair to stay messy and fall down her shoulders for the shoot; she also accessorized with a set of simple rings

A separate photo of Hamlin endorsing the new products was uploaded to SKIMS’ official Instagram story on Wednesday showing her laying on her stomach as she showed off a little more of her backside for the brand’s 2.3 million followers.

In September of last year she was pictured getting close to her younger sister Amelia in a shot to promote items from the shapewear brand. 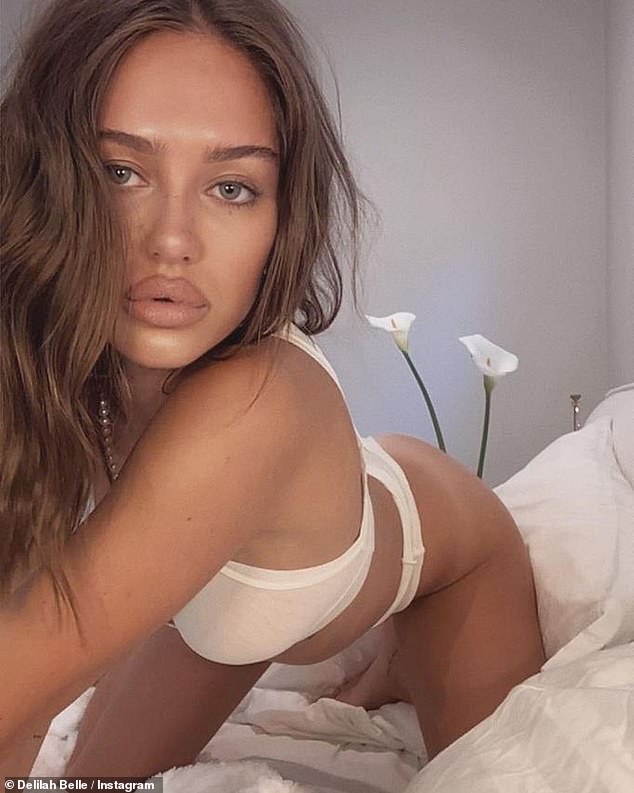 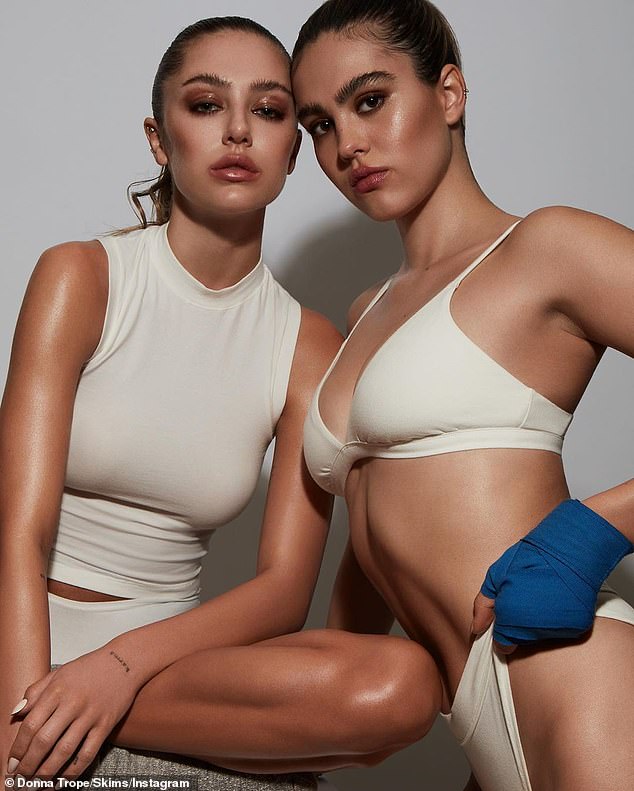 Kardashian founded SKIMS in June of 2019 after becoming frustrated about not being able to find undergarments that fit her specific needs as a working model.

The line was initially branded Kimono, but after the 40-year-old supermodel received criticism for appropriating the name of the traditional Japanese garments the brand’s name was changed to its current one. 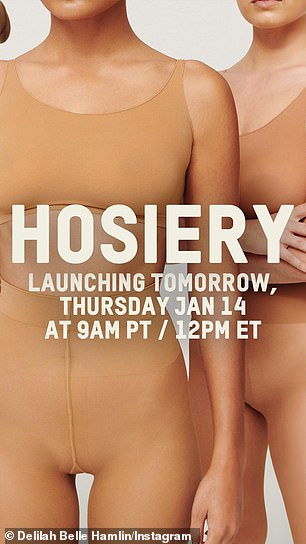 Going live: SKIMS’ new hosiery line is set to have its wide release on the brand’s official website later today

The brand’s founder has also taken an active role as the main face of SKIMS, and often features in its promotional materials.

Other figures who have been involved with the undergarment brand include Kardashian’s sister Kourtney and her niece Kylie Jenner, among others.

In February, the media figure spoke to Harper’s Bazaar about the motivations behind starting the brand and the balance of fashion and function that she was attempting to find with her products.

Kardashian stated: ‘I’m all about comfort and glamour at the same time. I always think you can do it all, so why not have everything that you need as far as your products?’

She also elaborated on her design ideals and how many of her detractors thought that what she desired for her products was out of her reach.

‘I’m very minimal but practical…When I said I wanted seamless shapewear, everyone looked and thought that I was crazy,’ she added.

Kardashian then opined that she was especially focused on removing seams from her line’s clothing, adding that she viewed them as unnecessary for undergarments.

The model opined: ‘You would have this really tight dress and then see this seam, defeating the purpose of wearing something that is supposed to look like there is nothing underneath.’ 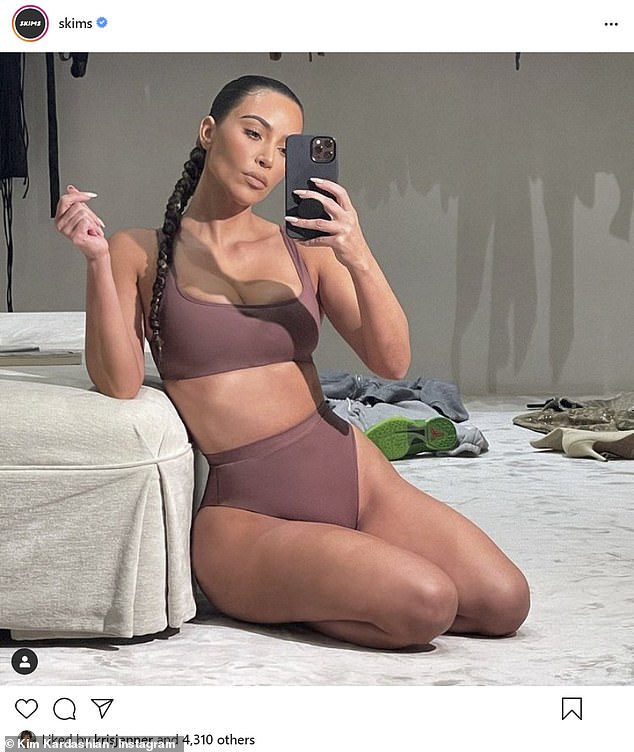 Famous founder: Kardashian founded the brand in 2019 with the goal of designing shapewear that would meet her desired specifications regarding shape and feel

Loading...
Newer Post
Armed 'militias' are illegal. Will authorities crack down if they show up at state capitals next week?
Older Post
Covid variant symptoms: What are the different symptoms of each coronavirus variant?

Sigourney Weaver, 71, dons a black wetsuit and holds hands with husband Jim Simpson after a swim 0

Nature: Goats often prefer to work for life's treats rather than being handed them on a plate  0