She is competing on the 2021 series of Dancing On Ice.  And Faye Brookes insists she wants criticism from judges and revealed she and partner Hamis


She is competing on the 2021 series of Dancing On Ice.

And Faye Brookes insists she wants criticism from judges and revealed she and partner Hamish Gaman will be performing as Prince William and Kate Middleton for ‘Love Week’.

Speaking on Lorraine on Friday, the Coronation Street star, 33, revealed that she wants to ‘get better’ and welcomes judges criticism. 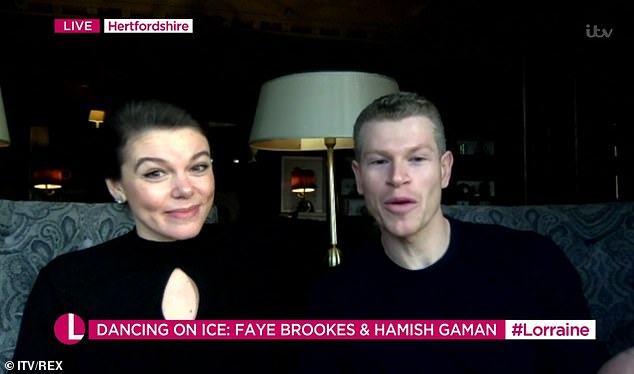 Upping her game: Faye Brookes, 33, told Lorraine on Friday said she wants criticism from judges and she and skating partner Hamish Gaman are preparing to perform as Prince William and Kate Middleton this weekend

She said: ‘Listen, they’re doing their job aren’t they. They’re giving constructive criticism and I want them to, because I want to get better.’

Partner Hamish was quick to sing Faye’s praises, and said she has seen her hard work pay off as she ‘became like a swan’ during last week’s performance.

He said: ‘It’s a dream come true. From day one Faye was like Bambi and she became like a swan last week. She’s done everything I’ve asked and really seen the fruit of her labour.’ 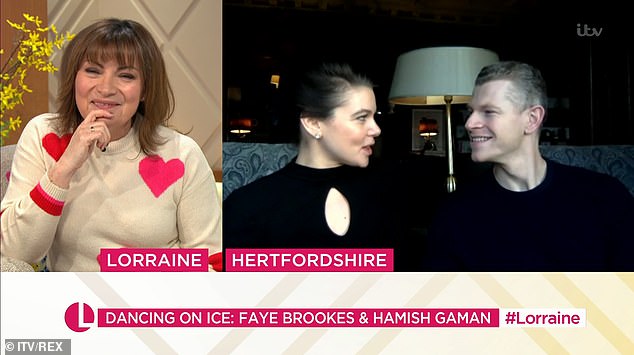 Duke and Duchess: The Coronation Street star revealed she and partner Hamish Gaman will be performing as Prince William and Kate Middleton for ‘Love Week’ in full wedding attire

Faye added: ‘I’ve just completely fallen in love with it and embraced this world that you’ve introduced me to. And thank goodness I have Hamish.

‘It’s put a fire in my belly this week. I’m exhausted, I’m not gonna lie. This is the most difficult challenge I’ve taken on in my entire life. But that fire in my belly makes me wanna be better.’

The pair went on to reveal that they would be dressed as the Duke and Duchess of Cambridge in wedding attire for their Love Week performance.

Faye said: ‘We have been given the honour of Kate and William. I’m in the full wedding dress.’

Hamish praised the costumes on the show, adding: ‘The wardrobe department is incredible.’ 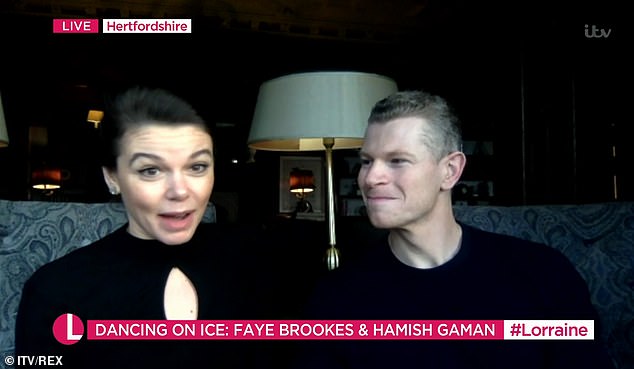 Praise: Hamish was quick to sing Faye’s praises, and said she has seen her hard work pay off as she ‘became like a swan’ during last week’s performance

The professional star also spoke about getting married, adding that he was ‘in no rush’ and when it’s ‘safe’ he and partner Amelia will go ahead with their dream wedding.

He said: ‘It’s just the way the world is right now. We’re in no rush. We love each other. When it happens it happens.

‘When it’s safe to do so we’ll go ahead and give ourselves the dream wedding that we want. Amelia has all the dress ideas in her head.’

Faye added that fellow Coronation Street star Jane Danson gave her tips about Dancing On Ice, after she appeared on the show in 2019.

She said: ‘We saw her back in half term when it was safe to do so and she told us she’s still dreaming of the show and said it’s the best thing she ever did. 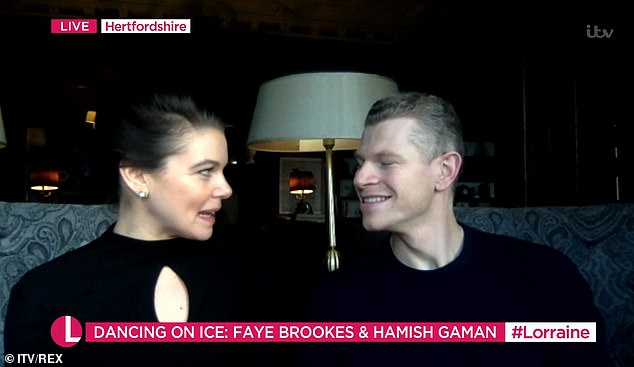 ‘The most difficult challenge’: Faye thanked partner Hamish for being by her side during their time on Dancing On Ice

‘We’re trying to give everyone at home some hope some joy and it’s a journey for me as well, with Hamish. To see me grow is amazing.’

Recently, the actress discussed what the future holds for her and her boyfriend, Joe Davies.

She revealed their plans to get married and have children as she declared he is the ‘best cheerleader’ whenever she steps foot on the ice.

When asked if an engagement is on the cards, Faye responded to OK! magazine: ‘I would love to get married and I know Joe would too, but right now we love our lives and there is no pressure. There is enough pressure on the world to get through this pandemic.’ 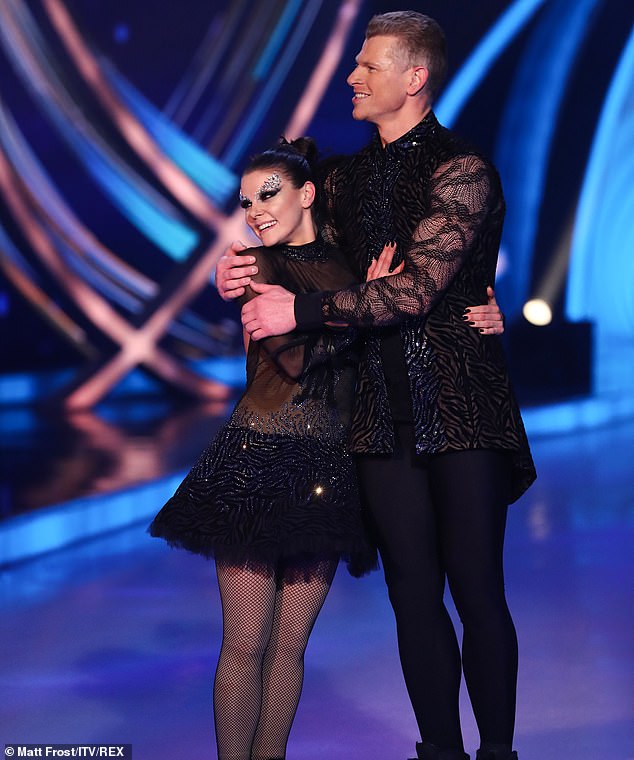 Swan lake: The actress performed a ballet-inspired routine, with the judges saying they wanted to see more from her next week as she needs to keep on pushing herself

Her partner Joe, 27, concurred: ‘There’s a huge future ahead for both of us and we’re on our own journey.’

She also spoke of their elaborate wedding plans as she added: ‘It’s going to have to be a big wedding! As much as we’d love it to be intimate and have our parents there as witnesses, there are too many important people in our lives.’

According to Faye, she and Joe are incredibly close to their families, and they have a ‘great group of friends,’ who they want to attend their wedding ceremony.

She also confirmed they have ‘fur babies’ for now – referring to their dogs – and that they haven’t made ‘any plans’ to have children.

However, she did reveal they have discussed the possibility of having kids as Joe subtly added: ‘There will be a time and place for everything.’ 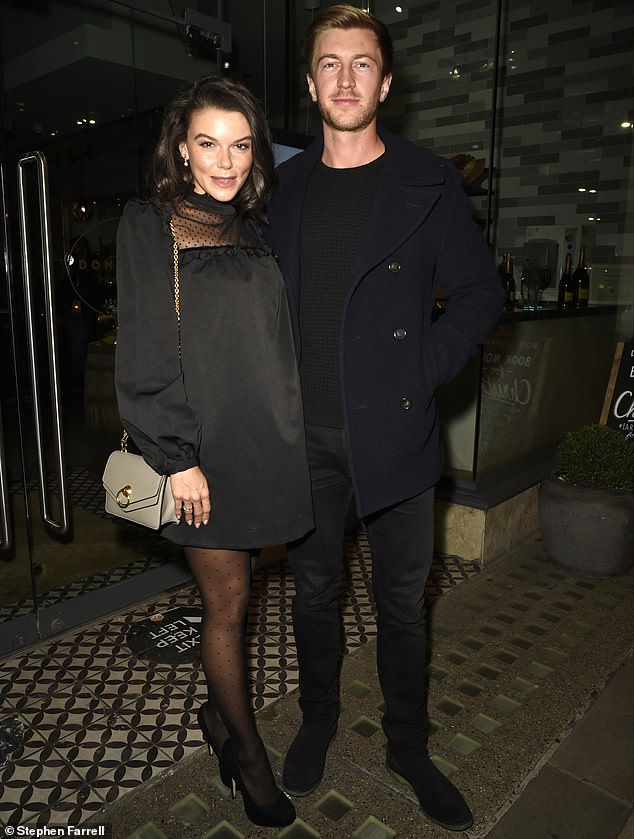 Love! Faye discussed her possible plans to get married and have children with her beau Joe Davies as she said he is the ‘best cheerleader’ whenever she performs on Dancing On Ice

Loading...
Newer Post
Live impeachment updates: Trump's legal team aims to distance him from Capitol violence in opening arguments
Older Post
Statins side effects: 'Rhabdomyolysis' could cause life-threatening damage – what is it?

Liev Schreiber, 53, links arms with girlfriend Taylor Neisen, 27, as they stroll through Venice 0