The Olympian who broke her neck, the soap star who stabbed herself in the head with her own skate
Shelves in Marks & Spencer stores in FRANCE are left empty
So where IS all the free school meals cash going?

Dancing On Ice pro Yebin Mok has been forced to pull out of the first live show, after suffering a laceration to her leg during training.

The skater, who was set to perform with Olympic skier Graham Bell, will be out for ‘quite a few weeks’ while she recovers following the ‘freak accident.’

The injury means Graham will make his skating debut next Sunday instead of this weekend with a new professional partner, and comedian Rufus Hound’s first performance will be brought forward to take his place. 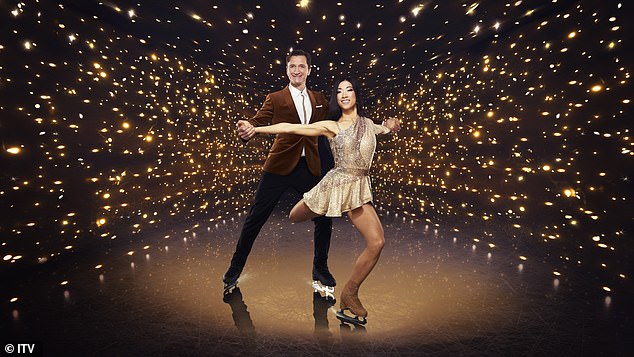 Ouch! Dancing On Ice pro Yebin Mok has been forced to pull out of the first live show, after suffering a laceration to her leg during training

Dancing On Ice hosts Holly Willoughby and Phillip Schofield made the announcement during Wednesday’s This Morning.

Holly said: ‘This week Graham Bell and his partner Yebin had a freak accident which resulted in her having a laceration on her leg.’

The presenting duo added that they had a Zoom meeting with Yebin following the accident and got a glimpse of the nasty injury, which they couldn’t show on air.

Holly confessed she couldn’t even look at the injury, and squirmed as Phillip described the details.

It was then announced that due to the accident Graham would not take part in the first live show, which was set to see the first six couples make their skating debut.

Instead Rufus and his professional partner Robin Johnstone will perform during the live launch show on Sunday, and Graham will skate the following week with Karina Manta.

Remains of an upper-class one-year-old that lived 2,000 years ago is found buried with their pet dog 0