Customs officers urge the government to prioritise vaccinations for staff

British Airways boss urges Boris Johnson to end 'heart-breaking' restrictions on foreign travel
A year ago today the shutters came down on shops, bars and restaurants and deaths hit 233
Matt Hancock says 'time needs to be taken' with lockdown despite vaccines for all adults by July 31


Customs officers have urged the government to prioritise vaccinations for staff and warned a Covid-19 outbreak could be ‘disastrous’ for the flow of goods into the UK.

One operator said workers were pulling 16-hour shifts to help companies deal with the post-Brexit rules.

Another said out of 14 employees two are self-isolating and if any more go down they will ‘have to consider closing’.

It comes as Boris Johnson will be questioned on the rollout of the vaccine after warnings to abide by lockdown restrictions were stepped up to help the NHS. 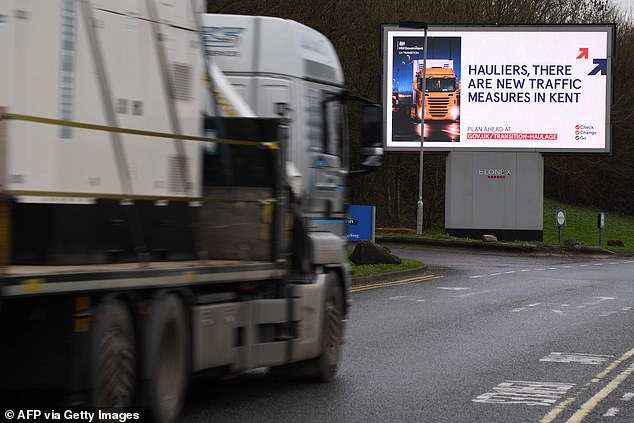 One operator said workers were pulling 16-hour shifts to help companies deal with the post-Brexit rules. Pictured: A lorry in Dover on Monday

The first operator told the BBC: ‘A Covid outbreak would be disastrous. Customs clearance staff should be identified as key workers and fast-tracked for vaccination.’

The other wrote to Transport Secretary Grant Shapps and his MP Damian Green warning he may have to close.

He said: ‘We have 14 staff. Two have already had to self-isolate, if we lose any more we would have to consider closing.’

He said: ‘Customs agents are absolutely swamped, they are understaffed by tens of thousands and although volumes have been light thanks to pre-Christmas and pre-Brexit stockpiling, we are approaching a critical point.’ 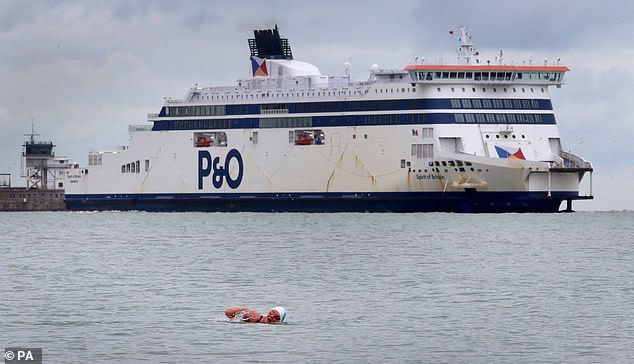 Another said out of 14 employees two are self-isolating and if any more go down they will ‘have to consider closing’. Pictured: A woman swims in front of a ship at the Port of Dover on Monday

Friday is being seen as a ‘moment of truth’ as the amount of items flowing through the border is expected to reach normal totals.

The ports have so far stood up to the pressure but the BBC says that is because many traders are not getting that far due to incomplete documents.

The crossing between Dover and Calais in France only saw 40 per cent traffic last week compared to this time last year.

The Prime Minister will be grilled by senior MPs on the liaison committee after facing Labour leader Sir Keir Starmer during PMQs on Wednesday.

Vaccines minister Nadhim Zahawi and health bosses crucial to the jabs programme will also be questioned by the Commons science and technology committee.

With rolling out the vaccines key to easing lockdowns, the latest NHS figures showed 2,431,648 in the UK have received a first dose.

But the health service was under extraordinary pressure with the number of Covid-19 patients in hospital in England at a record 32,202 as of 8am on Tuesday – up 22 per cent on a week ago, and 82 per cent since Christmas Day. 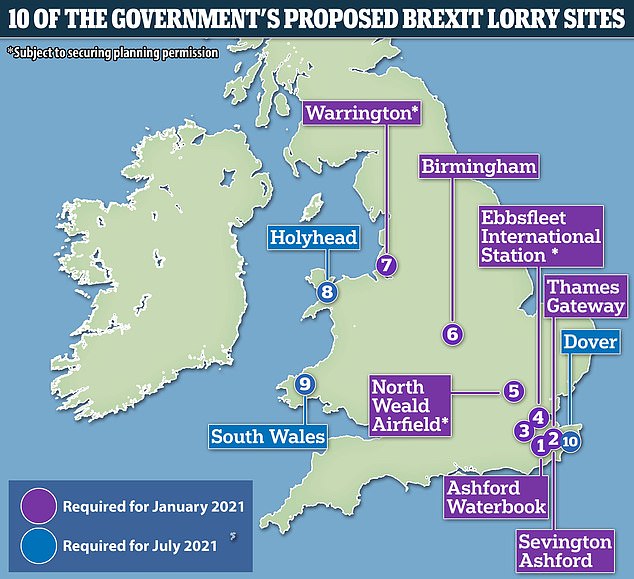 Kent will have five customs check facilities up and running by July, which will monitor traffic using the Eurotunnel and the Port of Dover

Latest figures showed that as of Tuesday, a further 1,243 people in the UK had died within 28 days of testing positive for Covid-19, with a further 45,533 cases being confirmed by labs.

Separate figures published by the UK’s statistics agencies for deaths where Covid-19 has been mentioned on the death certificate, together with additional data on deaths that have occurred in recent days, show there have now been 99,000 deaths involving Covid-19 in the UK.

The Scottish Government is considering further Covid-19 restrictions as the death toll from the virus passed 5,000. First Minister Nicola Sturgeon will outline any changes to the Scottish Parliament on Wednesday.

NHS Providers chief executive Chris Hopson told MPs the peak demand on the health service may not be reached until early to mid-February.

To offer some respite, hospital patients are to be discharged early from one London hospital in order to free beds for critically-ill Covid-19 patients.

A hospital spokesman said: ‘To create capacity in the hospital to care for the high number of patients requiring admission, we have partnered with a local hotel to temporarily accommodate mainly homeless patients who are ready to safely leave hospital and will benefit from further support from community partners.’

The Guardian reported an LHG spokesman saying the patients ‘are recovered or recovering from Covid and who are medically fit for discharge’ so do not need specialist medical supervision. 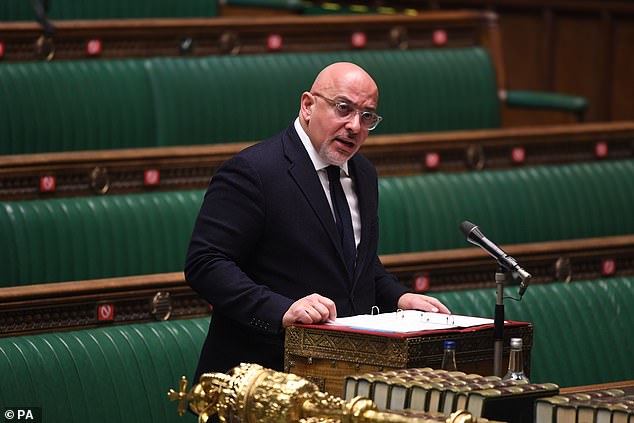 Meanwhile, the NHS denied a report in the Telegraph that suggested the vaccine rollout was being paused in some areas to allow other parts of the country to catch up.

A spokesman said: ‘Actually, all GP sites are getting vaccine deliveries this week and next.’

Scotland could vaccinate people against coronavirus round the clock in a bid to see people given protection against the virus as quickly as possible, Ms Sturgeon said.

She did not rule out younger people being offered vaccination appointments on a 24/7 basis, saying: ‘We will look at anything and everything that allows us to get this vaccination programme done as quickly as possible.’

The latest pandemic lockdown in Northern Ireland is likely to last beyond February 6, the region’s chief medical officer said.

Dr Michael McBride said restrictions will be required for a ‘considerable number of months’.

Amid concerns the current restrictions in England may not sufficiently supress the virus, Home Secretary Priti Patel said a minority of the public are ‘putting the health of the nation at risk’ as she backed a tougher police approach to lockdown rules.

She told a Downing Street press conference on Tuesday that officers are moving more quickly to issuing fines where people are clearly breaching coronavirus regulations, with nearly 45,000 fixed penalty notices issued across the UK since March.

Chairman of the National Police Chiefs’ Council Martin Hewitt said that more officers will be out on dedicated patrols to deal with rule breakers, while Communities Secretary Robert Jenrick has also spoken to councils about enforcing the regulations.

But leaders of police groups called on the Government to clarify the ‘incredibly vague’ rules, which saw two women incorrectly fined for driving five miles from their Derbyshire homes to meet for a walk while the Prime Minister went for a bike ride seven miles from Downing Street.