Covid-19 patients are most infectious one day BEFORE symptoms

Covid-19 patients are most infectious one day BEFORE symptoms appear, study revealsFrench researchers used a computer to predict the c


Covid-19 patients are most infectious one day BEFORE symptoms appear, study reveals

A mathematical study of Covid-19 patients in French hospitals shows people are at their most infectious one day before they develop symptoms.

Researchers used a computer model to process data on viral load — the amount of coronavirus a person is infected with — and how it decreases throughout infection.

Previous studies have found viral load aligns with infectivity and also increases the likelihood of death, meaning an infected person with a high amount of the virus in their system is more infectious and also at greater risk of dying from Covd-19.

The researchers found that the amount of virus in a person’s system takes longer to diminish in older patients, leading to a protracted fight against Covid-19.

Data from 655 patients admitted to hospital in March 2020 was analysed by scientists, led by the University of Paris.

Of the patients in the study, 40 per cent received oxygen therapy, 144 were admitted to ICU and 78 died.

Complex mathematical models allowed researchers to retrospectively track a patient’s course of infection to understand how the virus behaves in the body.

Dynamics such as viral load, duration of viral shedding and mortality were all factored in to the equations.

The average time for symptoms to develop was calculated as seven days after infection.

‘We predict that peak viral load occurs one day before symptom onset, on average,’ the researchers write in their study, published in PNAS. 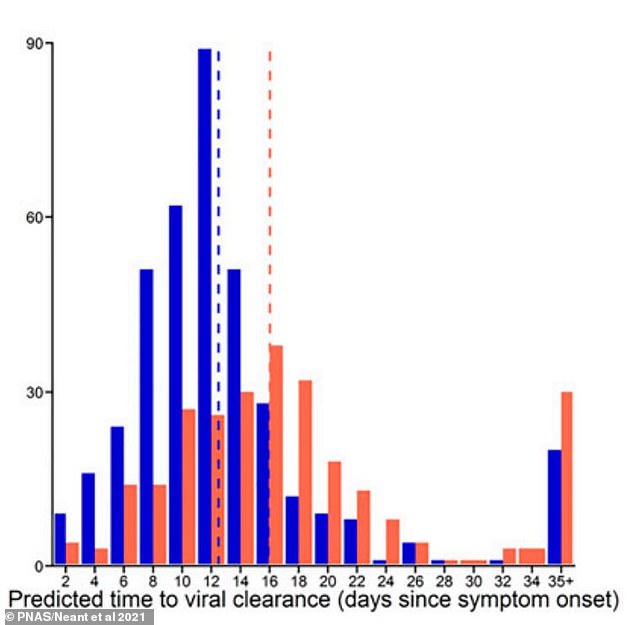 Pictured, a graph showing predictions of how long it takes people under 65 (blue) and over 65 (red) to remove the virus from their system. The average for younger people is 13 day and 16 days for people who are over 65

Primary school-aged children infected with the coronavirus have much smaller viral loads than adults with Covid-19, a study has found.

Viral load — the amount of virus a person harbours in their nose and throat — is believed by some scientists to be linked to transmissibility, although there is debate over these claims.

Data from public health officials in the Netherlands reveals over-80s have a viral load 16 times bigger than than children under the age of 12.

Rapid antigen tests, like ones suggested for use in schools and airports, are also likely to be less accurate for children than adults, due to this smaller load, the researchers say.

However, they add the time between catching the virus and first symptoms emerging is shorter for people with higher viral loads.

This suggests patients admitted early after symptom onset had higher viral load compared to patients arriving later on in the course of their infection.

The study also found that in patients aged 65 or older, 59 per cent of the cohort, their cells were less able to eradicate the virus compared to younger people.

As a result, it took their bodies 16 days after symptoms first began to flush the virus out of their system, on average. For younger patients this occurs in just 13 days.

The study also looked at how effective antiviral treatments would be in patients with high viral loads.

In the hypothetical situation that there was a drug which can stop either 90 per cent of the virus replication or 90 per cent of cell infection, the researchers say this would reduce the time it takes to clear out all the virus by two days for under-65s and by three days in over-65s.

‘Considering a treatment blocking 99 per cent of viral production, the effects would be further improved in patients aged under 65, with a median reduction in time to viral clearance of 5.4 days,’ the researchers write.

‘The effects of treatment would be more sensible in patients above the age of 65, with a mortality reduced from 6.4 to 5.0 per cent for those without additional risk factor and from 19 to 14 per cent in those having at least one other risk factor.’