An Idaho Falls man was shot and killed by a police officer in his own backyard after being mistaken for a suspect fleeing a traffic stop.The fatal


An Idaho Falls man was shot and killed by a police officer in his own backyard after being mistaken for a suspect fleeing a traffic stop.

The fatal officer-involved shooting took place in Idaho Falls early Monday morning as police scoured a residential neighborhood in search of a man with a history of violence against law enforcement who was said to be armed.

‘There are no words to express how heavy our hearts are today,’ said Chief Bryce Johnson. ‘This situation is devastatingly tragic for the family, for the officer, and those that love and care about them. We all feel the weight of what has occurred today. Our sincere sympathies are with the family and friends of those involved, and most especially the family of the deceased.’

Police revealed to DailyMail.com on Tuesday that the deceased man was white, while the officer who shot him was Hispanic. They have not been named. 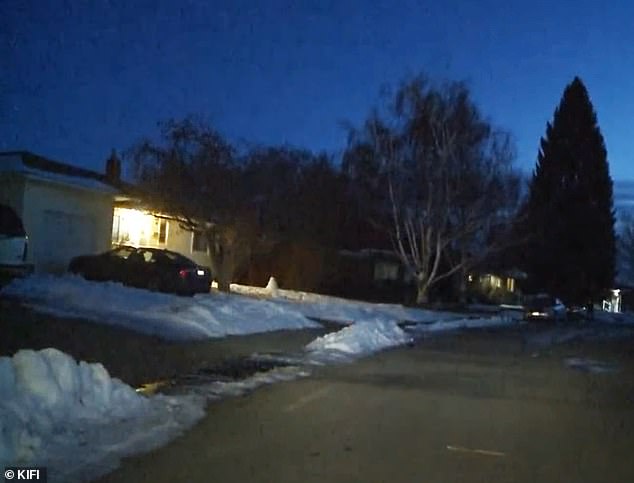 According to a detailed press release from the Idaho Police Department, the incident began unfolding after midnight, when a Bonneville County Sheriff’s deputy attempted to pull over a car for a broken taillight.

The vehicle stopped on the corner of Lincoln Drive off of 1st Street and a male passenger jumped out and ran into a residential neighborhood, where he scaled a fence in someone’s backyard and disappeared from view.

The deputy followed and radioed for help, letting other officers know that the suspect was wearing a black shirt and khaki pants.

Several deputies and Idaho Falls police officers joined the manhunt. As they were searching the area, a resident on Holbrook Drive told them they had seen the suspect run through their yard and that they believed he was armed with a gun. 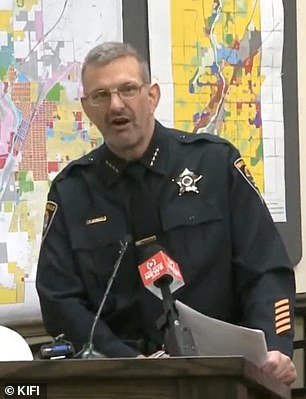 During the search, a police officer spoke with another resident on the corner of Tendoy Drive and Syringa Drive, telling him that law enforcement officers were looking for a suspect, and that they would be in the area for some time.

Meanwhile, police learned that the wanted man had multiple warrants out for his arrest, including felony battery on an officer, and two failure to appear warrants with original charges of resisting arrest, and providing false information to law enforcement.

Cops spoke to a woman who was in the car with the suspect, and she showed them a message she had received from the man sharing his GPS location, reported East Idaho News.

Police used the information to pinpoint the location of the suspect, which showed him in the backyard of a home on the corner of Tendoy Drive and Syringa Drive.

Officers and deputies surrounded the residence and backyard to stop the suspect from fleeing.

‘Due to the information that the suspect may be armed, and a prior history of violence when interacting with police officers, law enforcement personnel entered the location with their service weapons drawn,’ according to the release.

Officers heard yelling and approached the backyard where they encountered a man wearing a black shirt armed with a firearm. They ordered the man to drop his weapon.

‘We do not currently have the answers as to what exactly occurred during these moments,’ said Chief Johnson. ‘We do know that during this interaction, an Idaho Falls Police Officer discharged his service weapon firing one shot which struck the man. 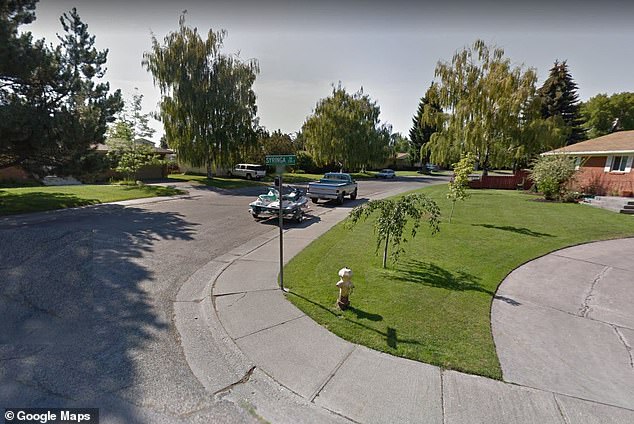 The incident began unfolding after midnight, when a county sheriff’s deputy attempted to pull over a car for a broken taillight, and its passenger jumped out and fled into this area 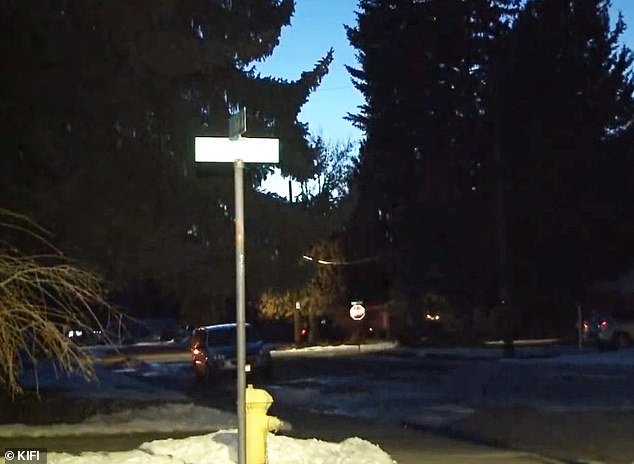 The suspect was described as wearing a black shirt and khaki pants, and a neighbor told police he may be armed with a gun

Police and paramedics tried to save the man’s life but he died from his injuries.

Law enforcement later determined that the deceased man was not the suspect but was the resident of the home. He was the same person an officer had spoken to earlier about the manhunt.

Shortly after the shooting, a deputy reported seeing a man running through the area. Officers and deputies tracked this man to a nearby home, where he was found hiding in a shed in the backyard.

The man was positively identified as the suspect who ran from the traffic stop and was taken into custody. He was then booked into the county jail on the warrants.

The entire incident – from the traffic stop to the arrest – lasted 20 minutes.

The Idaho Falls officer who fired the fatal shot has been placed on administrative leave and will not return to duty during the investigation.

The officer was wearing a body camera during the incident. That footage, along with all other body camera and dashboard camera footage from officers on scene, will be handed over to the Eastern Idaho Critical Incident Task Force, which was called to conduct the investigation.

Once the task force, led in this case by Idaho State Police, concludes its investigation, which could take weeks or months, the results will be turned over to the Bonneville County prosecutor, who will review the case and make a determination regarding whether the shooting was legally justified.

At the same time, the Idaho Falls Police Department will be conducting an internal affairs investigation. As part of the process, a Use of Force Review Board, which includes two civilians, will determine whether departmental policies and procedures were followed, and make recommendations to the chief.

The chief will then make a final determination regarding whether or not the shooting  was within the bound of departmental policy, and whether any disciplinary actions are appropriate.

What is the filibuster? A look at the Senate's consequential quirk and debate on its future 0