In what is quickly becoming a social media tradition, the loved ones of defeated Super Bowl players took aim at the officials on Sunday night as Ka


In what is quickly becoming a social media tradition, the loved ones of defeated Super Bowl players took aim at the officials on Sunday night as Kansas City tight end Travis Kelce’s girlfriend likened the Tampa Bay Buccaneers victory to ‘Chiefs vs the Refs.’

She then added: ‘If yall wanted to see the Chiefs vs the refs just say that.’

The defending champion Chiefs lost, 31-9, as the Kansas City offense failed to score a touchdown for the first time since Patrick Mahomes became the team’s starting quarterback.

Although it’s hard to blame the Chiefs’ offensive struggles on anything more than great defense by the Buccaneers, Nicole doubled down on her claim that the officials were missing defensive holding penalties.

‘Holding: the illegal restraining of another player who is not in possession of the ball,’ she reportedly wrote on Instagram in a since-deleted post, according to People.com. ‘Holding is prohibited in most football leagues, unless you’re playing against Tom Brady.’

She later changed her caption to read: ‘go team.’ 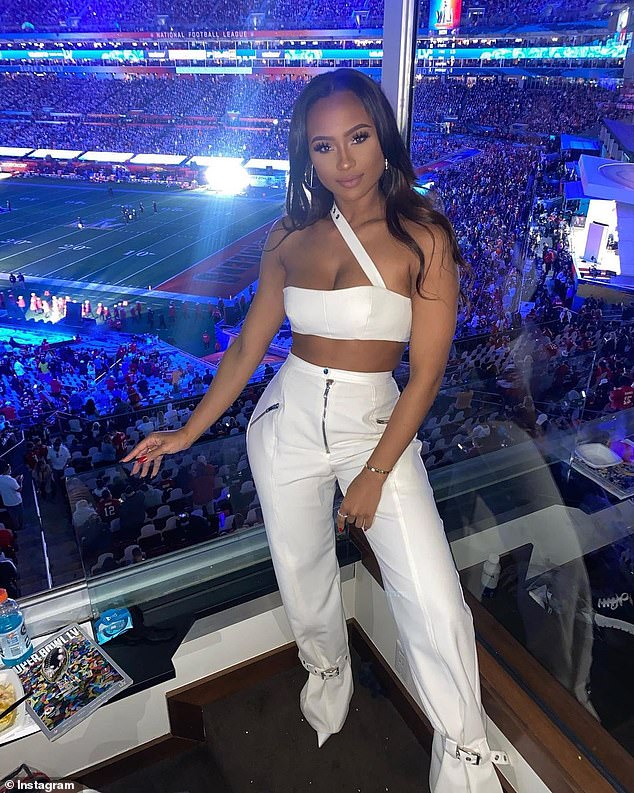 The defending champion Chiefs lost, 31-9, as their offense failed to score a touchdown for the first time since Patrick Mahomes became the team’s starting quarterback. To Nicole, the absence of any offensive or defensive holding calls against the Buccaneers was irritating 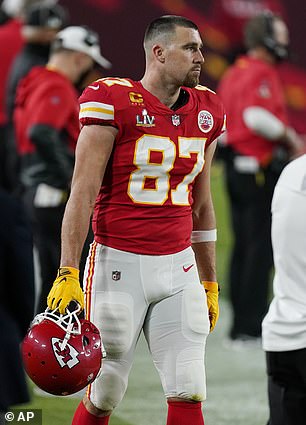 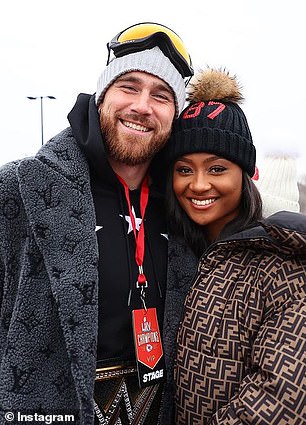 Travis Kelce and his girlfriend Kayla Nicole have been together, more or less, since 2017 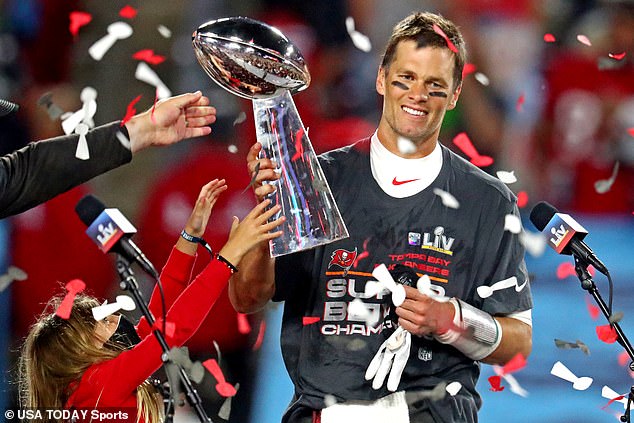 Tom Brady’s seventh title came with a big assist from officials, according to the loved ones of Kansas City Chiefs players such as Patrick Mahomes and Travis Kelce

Although it’s hard to blame the Chiefs’ offensive struggles on anything more than great defense by the Buccaneers, Nicole doubled down on her claim that the officials were missing defensive holding penalties. ‘Holding: the illegal restraining of another player who is not in possession of the ball,’ she reportedly wrote on Instagram in a since-deleted post, according to People.com. ‘Holding is prohibited in most football leagues, unless you’re playing against Tom Brady.’ She later changed her caption to read: ‘go team’ (pictured)

Later, back on Twitter, Nicole conceded defeat: ‘Congrats to the @Buccaneers. Tough game to watch but y’all got it.’

Mahomes had a similar situation with his mother, who tweeted at Tom Brady’s wife Gisele Bundchen after the game: ‘If you have to have the ref on your team is that really winning!!! @giseleofficial lol.’

Many Chiefs players and fans were upset in the first half as a series of costly penalties went against Kansas City.

By halftime, the defending champs had amassed more penalties (8) than points (6) — and more frustration than hope. It was an undisciplined, uncharacteristic and somewhat unbelievable loss of composure that set the stage for a 31-9 drubbing at the hands of the Bucs that very few saw coming.

Kansas City’s 95 penalty yards in the first half were the most by any team in the first half of any of the 269 regular-season and playoff games this season. They were one more yard than Kansas City had racked up in any single game all year. The Chiefs only committed three penalties in the second half to finish the game with 11 for 120 yards. It hardly counted as progress.

‘It was uncharacteristic, and it was too bad it happened today,’ coach Andy Reid said.

The team that ran like a classy, unstoppable machine through one championship season, and over 16 more wins en route to their second straight title game, imploded on itself. The Chiefs got too handsy in a vain attempt to cover Tampa Bay’s receivers, too jumpy on the line of scrimmage, too chippy when things didn’t go their way.

Each one of the eight first-half penalties hurt in its own way, none more than the two pass interference calls over the span of three plays that led to a touchdown and a 21-6 Bucs lead right before halftime. The drive started at the Tampa 29 with 1:01 left. Reid burned two timeouts, after two short Bucs gains, thinking the Chiefs might get the ball back.

The face of all this Kansas City frustration: It was defensive back Tyrann Mathieu, who, one play after a 34-yard pass interference call that put the Bucs in business, got hit with an interference call of his own that gave Tampa Bay the ball at the KC 1. After the touchdown on the next play, Mathieu got an unsportsmanlike conduct penalty for wagging a finger in Brady’s face.

No wonder he was frustrated. A few minutes earlier, Mathieu also sparred with Brady after his interception off a deflected ball was nullified by — what else — a defensive holding call. It was a marginal call that went against Charvarius Ward — lots of jockeying, and the sort of hand-to-hand combat that went unflagged through much of the playoffs.

It was only 7-3 at the time. And so, Mathieu said something to Brady. Brady didn’t back down. Brady came into the game with six Super Bowls titles, in part because he wins most of those mind games.

Now, he has seven.

‘I’d never really seen that side of Tom Brady, but whatever. No comment. It’s over with,’ Mathieu said.

Mahomes stayed stuck on one title. Flustered all day and hurried by a Bucs defense that apparently didn’t get the message about KC, he completed 26 of 49 passes, virtually all of them hurried, for 270 yards and two interceptions. It didn’t help that both starting tackles who had protected him all season, Mitchell Schwartz and Pro Bowler Eric Fisher, were out with injuries. 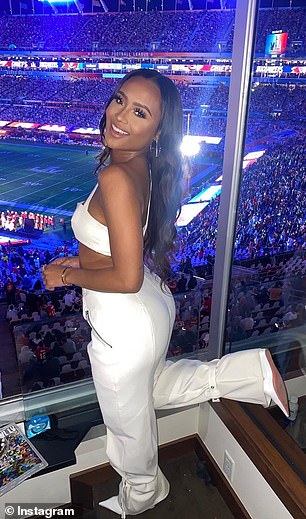 At least a half-dozen of Mahomes’ passes hit receivers in the hands but got dropped.

They weren’t the only ones with butterfingers.

With the Chiefs trailing 7-3 in the second quarter, lightly used punter Tommy Townsend dropped a perfect snap and had to scoop up the ball and rush the kick. It was a beauty that pinned Tampa back on its 30. But it was nullified by a holding call — a protector had to yank down an oncoming rusher to keep the late-off-the-foot kick from being blocked.

On the replay of fourth down, Townsend shanked a 29-yard kick and the Bucs took over on Kansas City’s 38. A penalty worth 10 years really cost the Chiefs 32.

Then, the flags started flying.

The first one on the ensuing drive nullified Mathieu’s interception.

The next was a five-yard penalty on 4th-and-5 — flag thrown by Sarah Thomas, the first female official to work a Super Bowl — that gave Tampa Bay a first down instead of settling for a field goal.

On the next play, Brady hit Rob Gronkowski for what looked like the second touchdown connection between the old Patriots teammates, who never looked better in the pewter-and-red that the Bucs wear. But there was a flag on the ground.

‘Holding. Defense, number 34,’ referee Carl Cheffers called out on the mic. That penalty was declined. It was 14-6 Bucs. Amid that sea of yellow, the Chiefs were seeing red.

‘Only referees can call the penalties, and penalties affect the game 1000 percent,’ defensive lineman Chris Jones said. ‘So, what can I say? We got a lot of penalties called on us today.’

Basking shark swims alongside boat off the coast of Cornwall

Basking shark swims alongside boat off the coast of Cornwall 0

Protests erupt after death of Daunte Wright, 20-year-old Black man shot by police during traffic stop: What we know 0

California boy, 12, missing after being swept into the Pacific Ocean, search suspended: report 0

Jane Seymour talks how to find joy amid COVID-19 0