The Sports Illustrated Swimsuit Issue covergirl watched from the stands as her boyfriend of more than five-years caught two of Tom Brady’s three touchdown passes, en route to a 31-9 victory over the Kansas City Chiefs.

But once the final second ticked off and the Bucs were crowned champions, the model quickly made her way to the field to soak in the moment with her man, otherwise known Gronk. 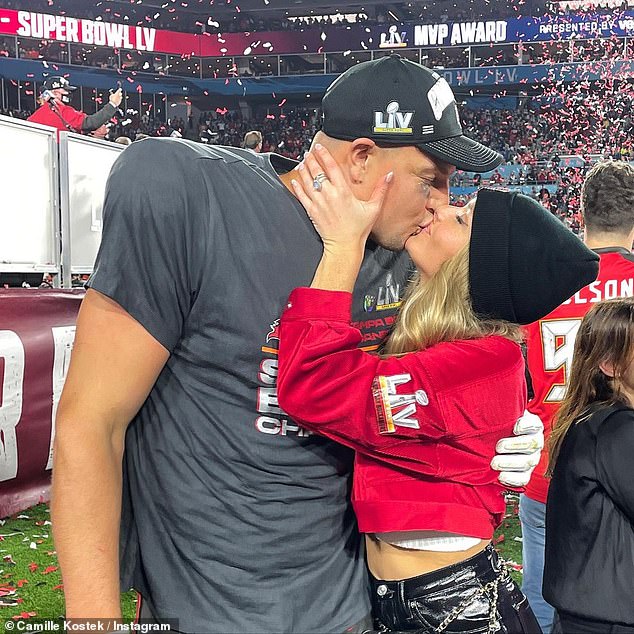 Champs! Camille Kostek celebrated the Tampa Bay Buccaneers’ Super Bowl title on Sunday by sharing a passionate kiss on the field with her boyfriend, and star player, Rob Gronkowski

The thrill of victory seemed to influence Kostek’s first post after the game, which showed her standing alongside Gronkowski.

‘CANT THINK OF A CAPTION RN IM CELEBRATING,’ she wrote, in a reference to being speechless in the wake of all of the excitement.

In the following photo, Kostek shared a passionate kiss with Gronkowski, where she confessed in the caption: ‘Tastes like a champion.’ 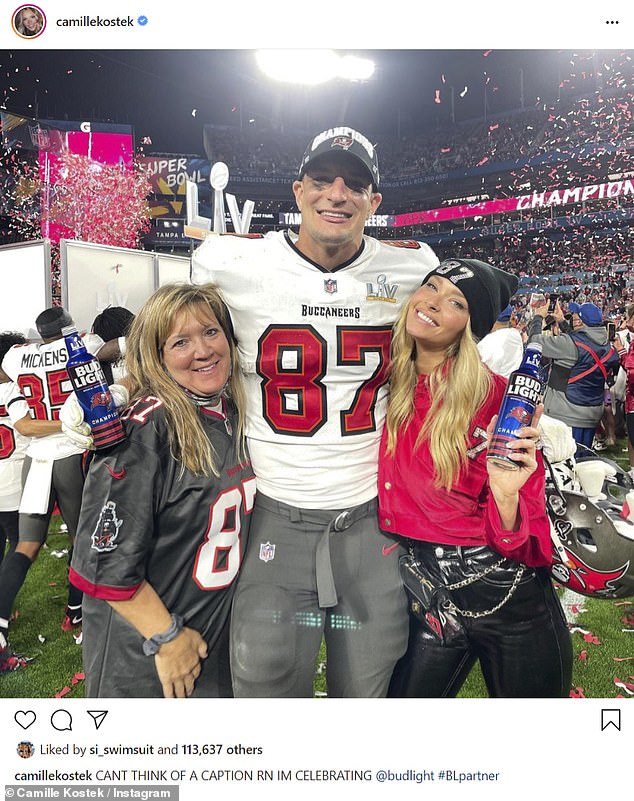 Celebrate good time: The 2019 Sports Illustrated Swimsuit Issue covergirl snuggled up with her boyfriend of more than five-years after his Bucs beat the Chiefs 31-9 in Super Bowl LV 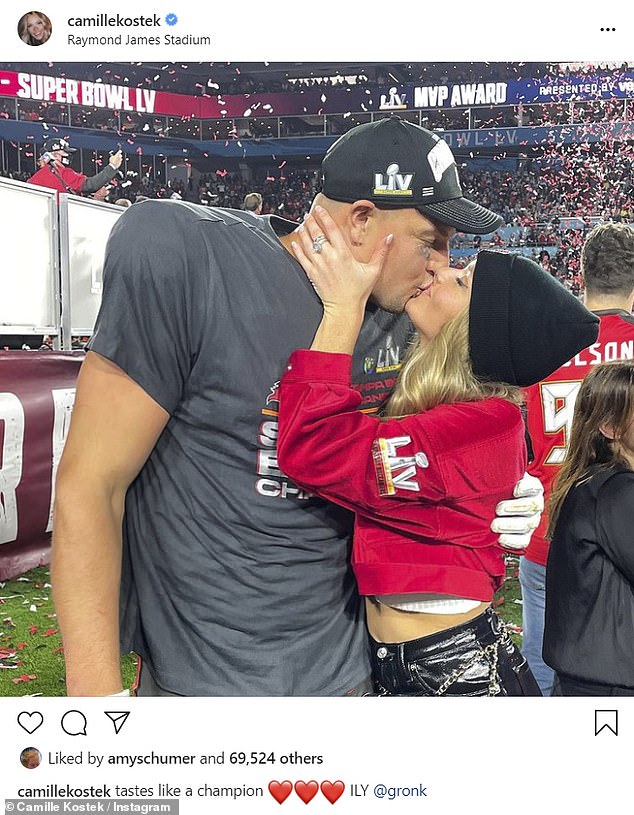 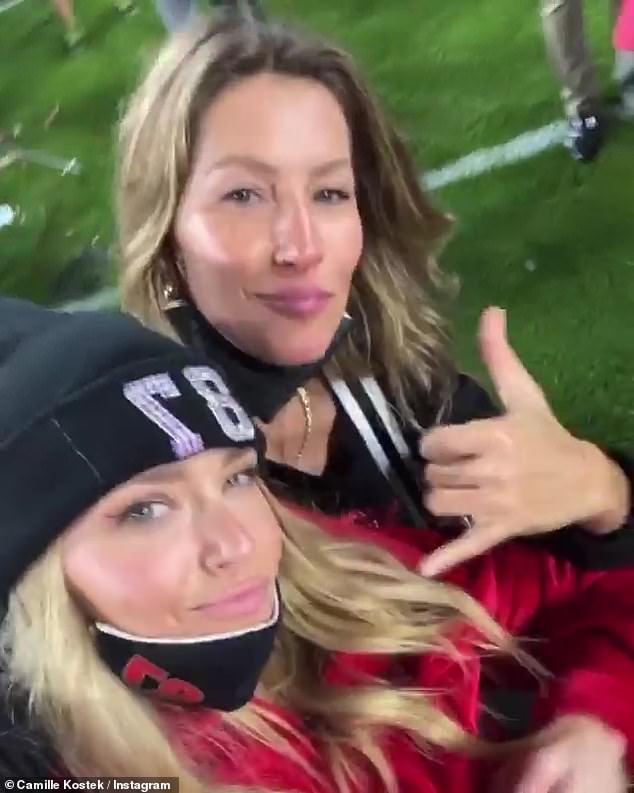 Kostek, 28, also shared a few celebratory moments with Brady’s wife, former supermodel Gisele Bündchen, that was captured on camera and shared on her Instagram page.

In the video selfie, Gisele comes up from behind and wraps her arms around Kostek’s shoulders and flashes a thumbs-up sign.

They briefly move haphazardly around in a circular motion as people all around them step up the party atmosphere. 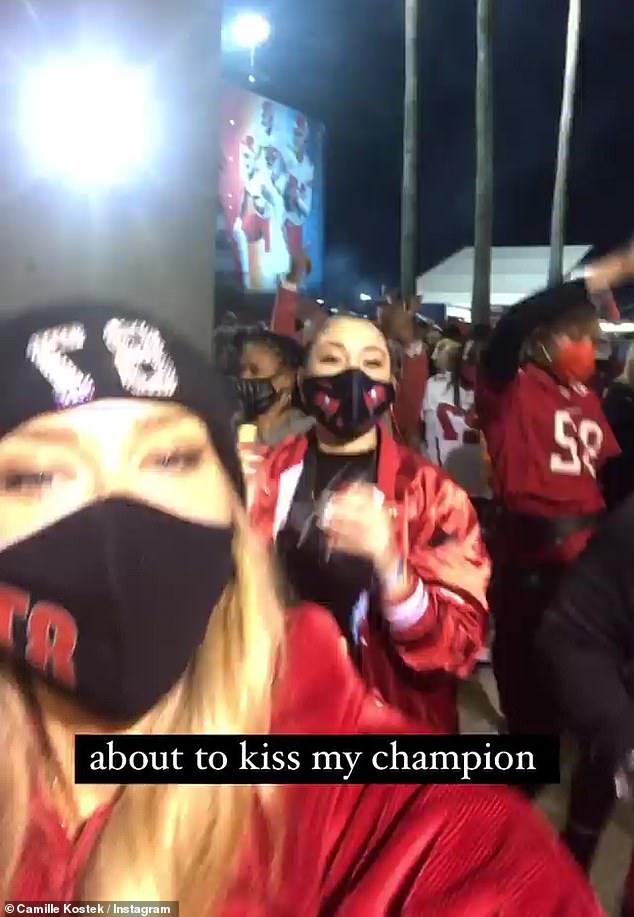 Elation: Kostek shot video of her travels from the stands of Raymond James Stadium on to the field after the game, as she hurried to ‘kiss my champion’ 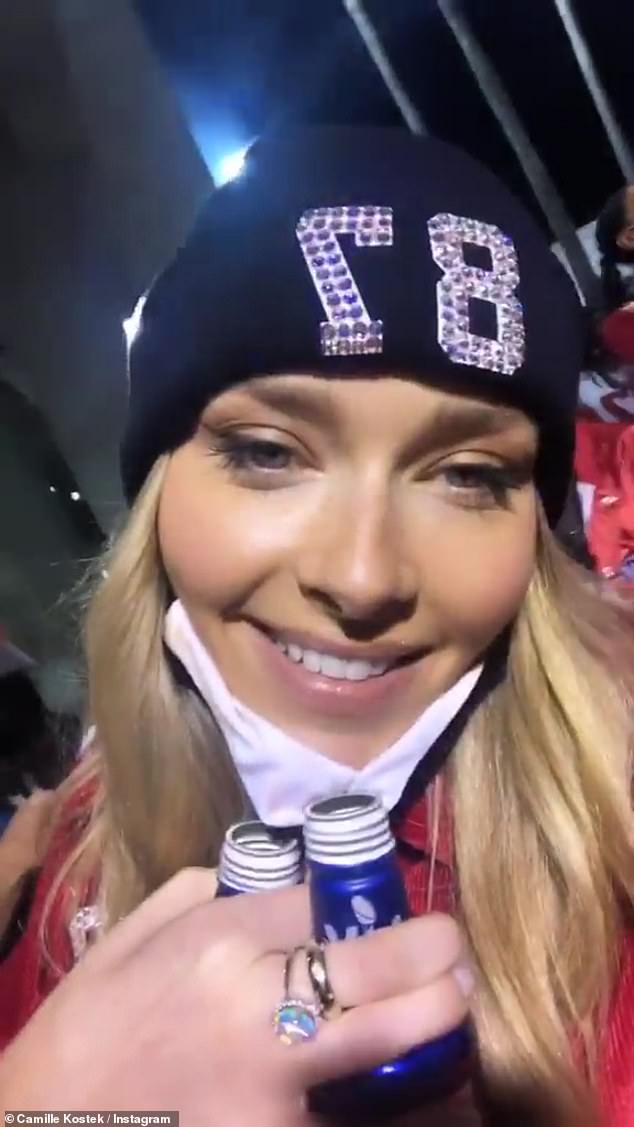 All in: The Connecticut native showed her love and loyalty by wearing her boyfriend’s jersey #87 on her hat and on the back of her red jacket

With Sunday’s win, Gronkowski is now a four-time Super Bowl champion; he notched three other titles during his nine-seasons with Tom Brady and the New England Patriots.

The New York native retired following the Patriots’ last Super Bowl win in February 2019, but after a year off to heal, Brady was able to convince him to join him in Tampa.

‘It’s hands down one of the greatest accomplishments in sports history,’ Gronkowski said in reference to his and Brady’s journey with the Buccaneers, as reported by ESPN.

‘I mean, I’m not going to say it’s the greatest, but it’s up there for sure.’ 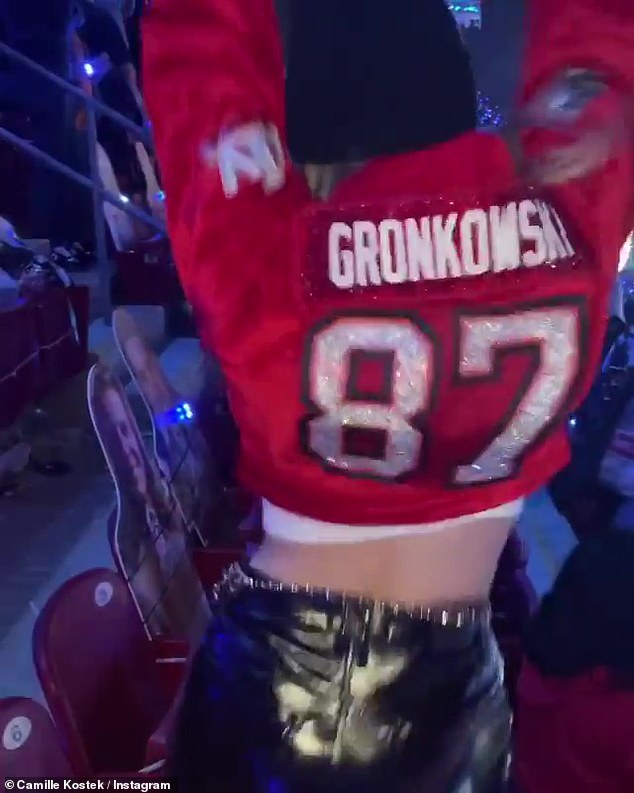 Go team! The model watched the game in the stands with friends and family 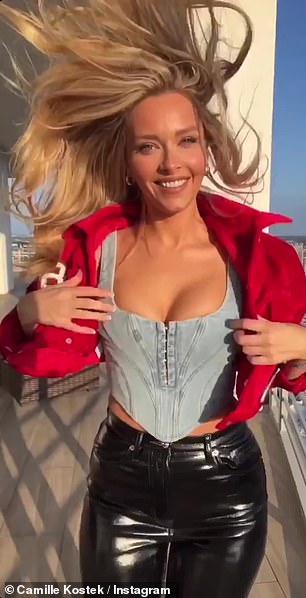 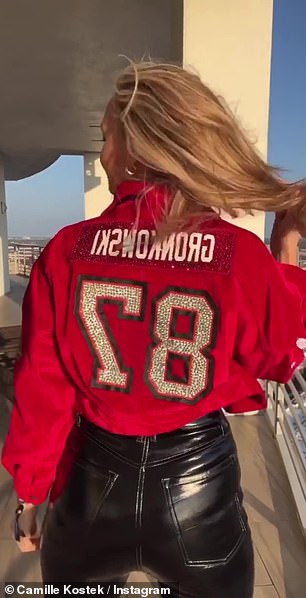 Representing: The model put her skills on display on Super Sunday in black leather pants and a cropped red jacket with Gronkowski’s #87 on the back

After a brief moment to reassess his thoughts, Gronkowski gave props to the Bucs’  organization and players before clarifying that his story ‘definitely ranks up there with one of my biggest accomplishments ever.’

He also won his fifth Most Valuable Player award with his efficient performance by throwing for 201 yards, which included those three touchdowns, without an interception. 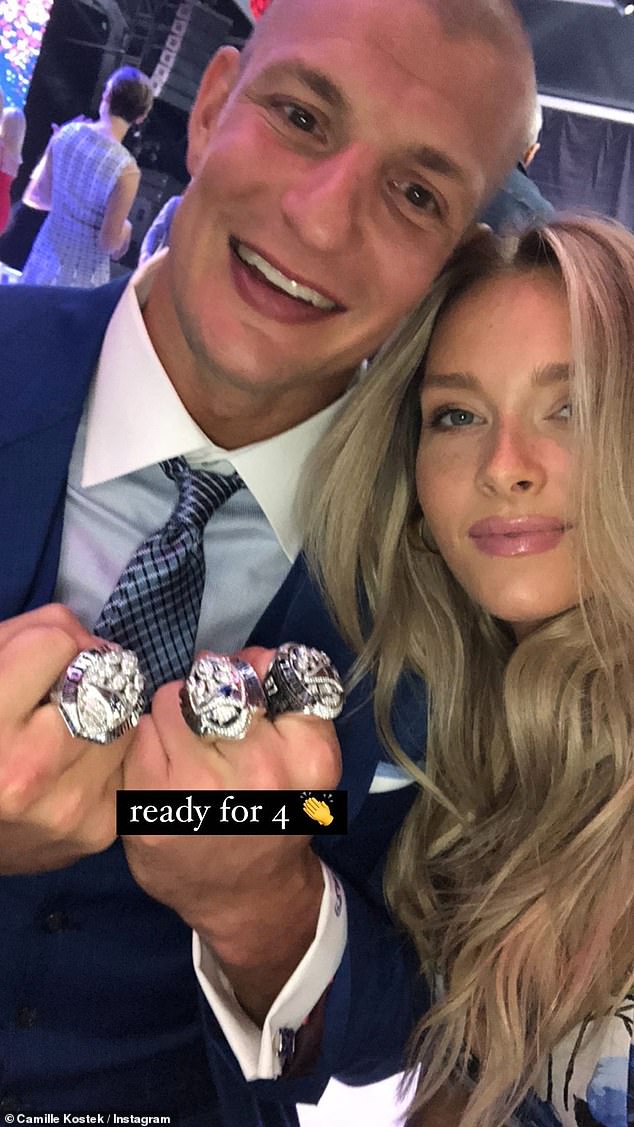 Super Bowl bling: With his three Super Bowl wins with the New England Patriots, Gronkowski will soon have his fourth, which is his first with Tampa Bay

Prosecution in Derek Chauvin trial rests after 11 days, 38 witnesses and dozens of video clips. Here are the highlights.

Prosecution in Derek Chauvin trial rests after 11 days, 38 witnesses and dozens of video clips. Here are the highlights. 0