And the new couple look to be going strong, as they enjoyed a romantic vacation in Port Douglas, Queensland, on Saturday.

Blonde bombshell Tegan, 35, shared a bevy of photos to her Instagram Stories, including one of her cuddling up to Kyle, 49, in a stunning outdoor pool. 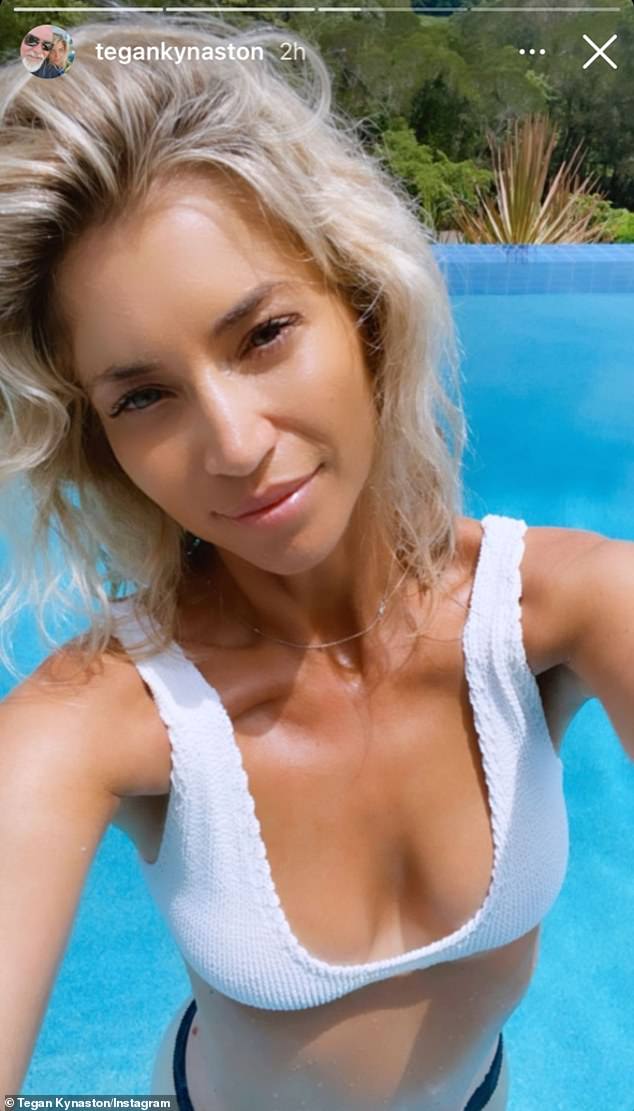 Summer lovin’: Tegan Kynaston (pictured), 35, showed off her bikini body in photos shared to her Instagram Stories on Saturday, as she enjoyed a romantic getaway in Port Douglas, Queensland, with her boyfriend Kyle Sandilands

Tegan showed off her cleavage and trim summer figure in a white bikini top and black briefs.

She allowed her platinum locks to fall in relaxed waves, and accessorised at times with a black cap.

Tegan also posted a photo of a beaming Kyle, crouched in the pool’s shallow water.

The couple have also been joined on the getaway with Kyle’s KIIS FM colleagues Bruno Bouchet and John Nicholson. 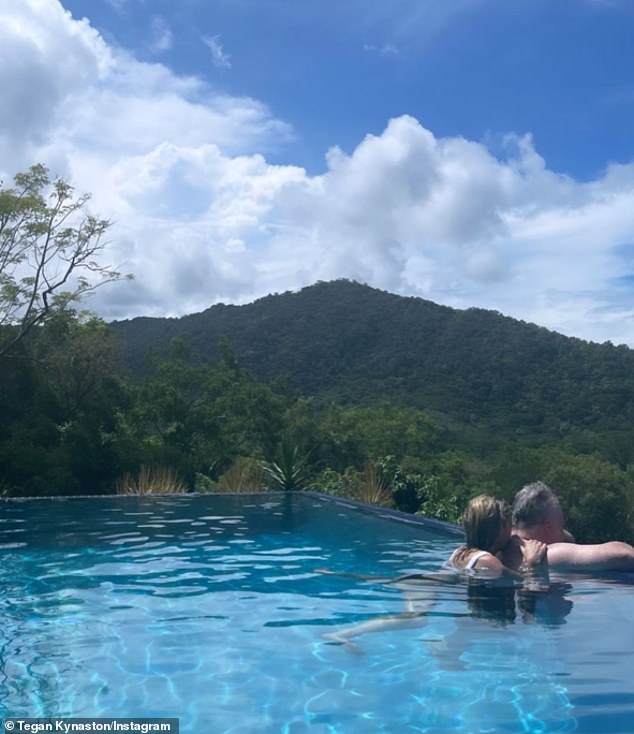 Packing on the PDA: The blonde bombshell also posted this photo of herself cuddling up to Kyle, 49, in a stunning outdoor pool 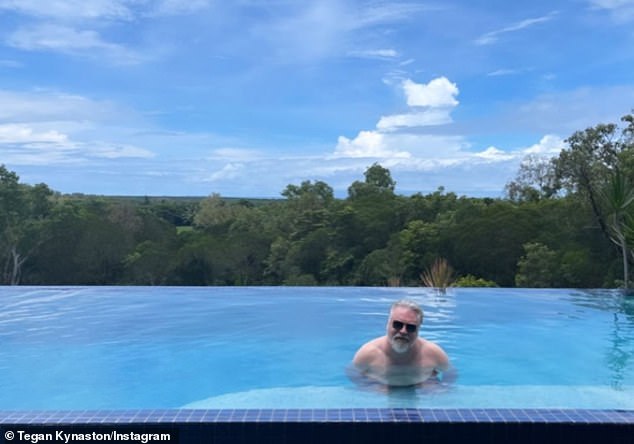 Company: The couple have also been joined on the trip with Kyle’s KIIS FM colleagues Bruno Bouchet and John Nicholson. Pictured: Kyle

Tegan and Kyle’s trip comes shortly after his ex-girlfriend Imogen confirmed her new relationship with a mystery man.

In January, Imogen confirmed she had found love once again, sharing a deliberately cropped picture to Instagram, disguising her secret lover.

‘I just want to say, that despite what everyone has thought, I have felt immense happiness over this last year,’ the 30-year-old began.

She went on to say that she is very fortunate to have found and ‘grown so close to someone so patient, helpful and understanding of my situation’ because she ‘still shares so much with someone else’. 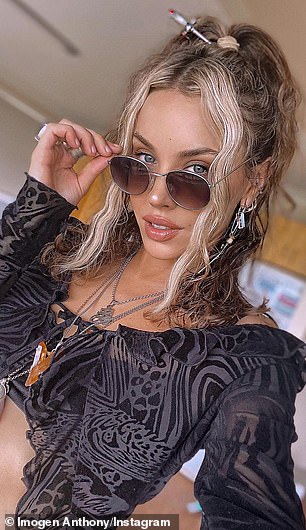 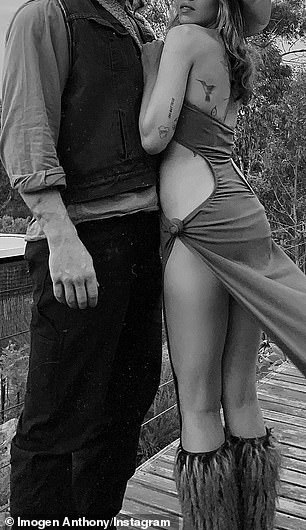 Happiness: Meanwhile in January, Kyle’s ex-girlfriend Imogen Anthony (pictured in both photos), 30, confirmed she had found love once again, deliberately cropping an Instagram photo (right) to disguise her secret lover 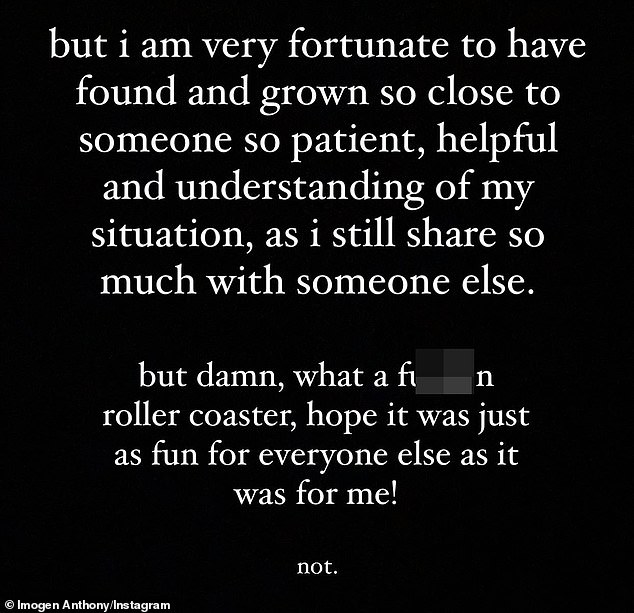 ‘But damn, what a f**ken roller coaster,’ she added. ‘Hope it was just as fun for everyone else as it was for me! Not.’

Imogen’s romance with Kyle ended back in 2019 after eight years together.

He debuted his romance with Tegan, his former personal assistant, early last year. 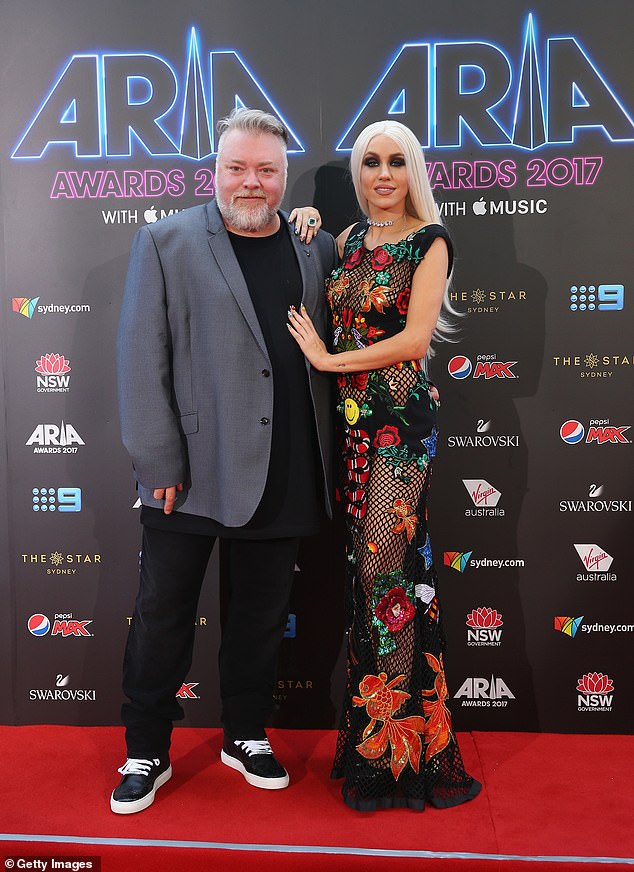 Over: Imogen’s romance with Kyle ended back in 2019 after eight years together. They are pictured in November, 2017

SARAH VINE: If you want to meet a real bigot, try talking to a liberal

Mario Falcone's son Parker, 2, was rushed to hospital after getting sweetcorn lodged in his nose

CPAC readies for Florida gathering amid COVID-19, as conservatives ready for Trump bonanza 0