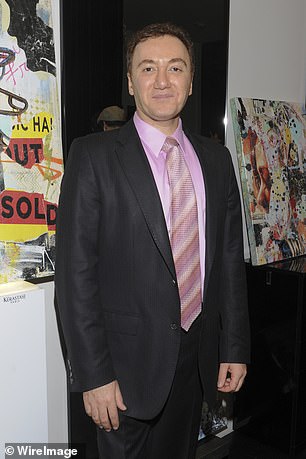 Dr. Payman Simoni, 50, pictured above, died on January 8 from coronavirus

A Beverly Hills plastic surgeon has died from COVID-19 complications after a patient who later tested positive for the coronavirus coughed on him while getting a lip injection.

Dr. Payman Simoni, 50, died on January 8 from a brain hemorrhage after he was placed in a medically induced coma when his lungs began to fail.

Katy Amiri-Younesi, a longtime family friend, said the death came as a ‘shock’ to loved ones of the father of two.

‘The shock is that he was so perfectly healthy,’ Amiri-Younesi told KCAL.

‘He’s a doctor, I called him when I had COVID. He was instructing me what to do.’

The father of two had performed the elective procedure on a woman in December, who had her temperature checked and filled out a coronavirus questionnaire, according to TMZ.

The maskless woman, however, was not tested for COVID-19 but called the doctor days later to tell him she had tested positive for the virus.

Friends of Simoni told KCAL that he felt ‘perfectly fine’ for about week and went into quarantine and began experiencing symptoms. 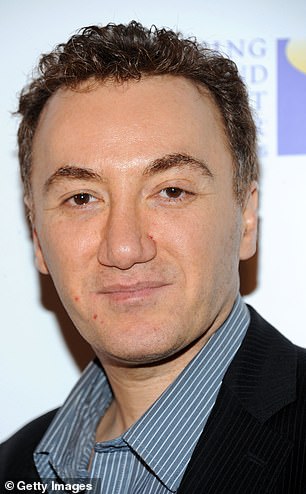 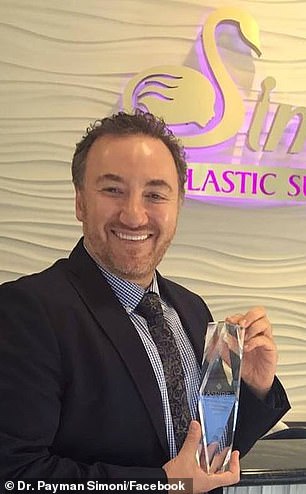 Payman Simoni, pictured above, died from COVID-19 complications after a patient who later tested positive for the coronavirus coughed on him while getting a lip injection 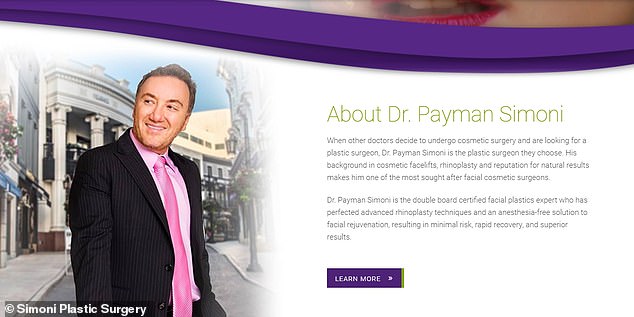 Simoni, pictured on his company’s website, suffered from a brain hemorrhage on January 8 after he was placed in a medically induced coma when his lungs began to fail

The doctor was taken to Cesars-Sinai Medical Center when he began feeling shortness of breath, and quickly deteriorated.

Last May, Beverly Hills City Council members voted 4-1 to roll back its moratorium on elective surgeries amid the pandemic to match the state’s regulations which had just been loosened by California governor Gavin Newsom, the Los Angeles Times reported.

The city council argued that residents should be able to receive treatments for medical conditions like a flagging heart valve and tooth aches – though it opened the door for cosmetic surgery.

Councilman Dr. Julian Gold, an anesthesiologist, said at the time that the ‘butt and boob thing is the smallest part of the conversation.’

Some doctors had chosen to hold off on performing cosmetic surgeries, and it remains unclear why Simoni had continued his practice amid the pandemic.

Daily Mail has reached out to Simoni Plastic Surgery for additional comment.

Friends and family said Simoni was ‘fun-loving and ambitious,’ and had recently become certified as a magician.

In November, Simoni filmed an upcoming episode of ‘Gown and Out in Beverly Hills’ with Patrik Simpson in which he performed the same procedure, TMZ reported.

Simpson told the outlet that Simoni was also wearing a mask during his surgery – but the two posed for a maskless picture in a post-operation appointment.

The coronavirus pandemic in Los Angeles County has hit grim new levels in the first days of the year as California’s COVID-19 death toll reached 30,000 on Monday.

Hospitals in Los Angeles are so swamped that patients on gurneys are being treated in gift shops and parking lots.

Officials started urging people to wear masks even at home if they go outside regularly and live with someone elderly or otherwise at high risk.

Anger over the restrictions has led to a recall movement against Democratic Gov. Gavin Newsom that has nearly gathered the 1.5 million signatures needed to put his career to a vote. 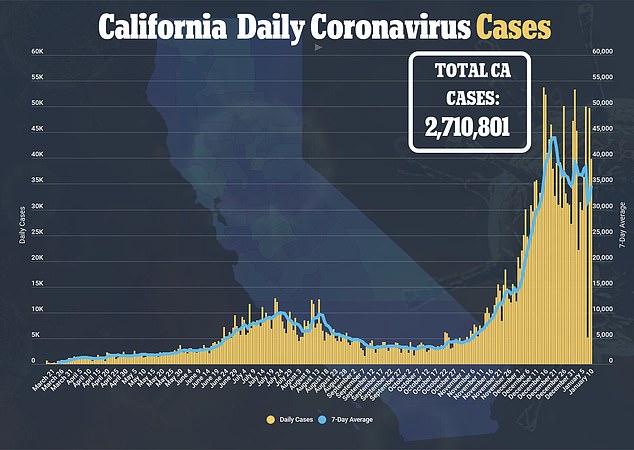 Los Angeles County is an epicenter for the COVID-19 outbreak, accounting for some 40 per cent of California’s virus-related deaths and a huge number of new cases 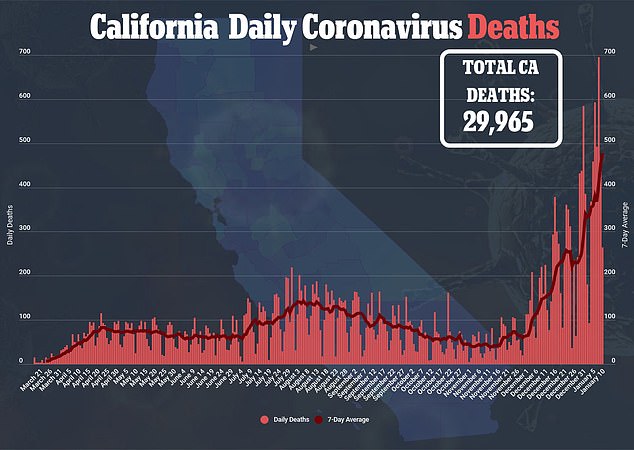 Ferrer said COVID-19 is still killing someone in the county every seven minutes, on average

Some Californians are escaping by heading to neighboring Arizona, where they can eat and drink at bars and restaurants.

The state announced Monday that it will vastly expand its effort with new mass vaccination sites at parking lots for Dodger Stadium in Los Angeles, Petco Park in San Diego and the CalExpo fairgrounds in Sacramento.

By week’s end, the city of Los Angeles planned to convert its huge COVID-19 testing site at Dodger Stadium into a vaccination center to handle 12,000 inoculations daily.

Los Angeles County is an epicenter for the COVID-19 outbreak, accounting for some 40 percent of California’s virus-related deaths and a huge number of new cases. 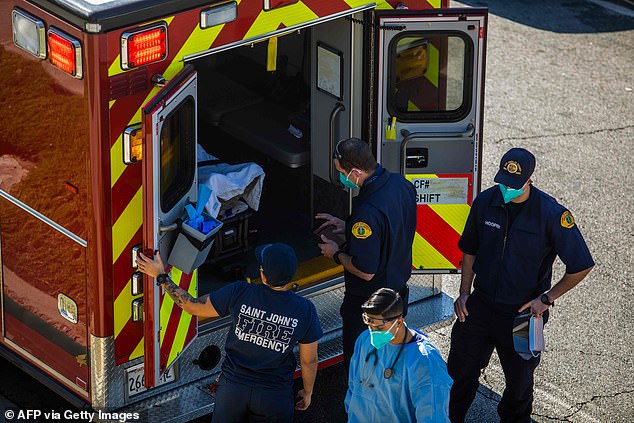 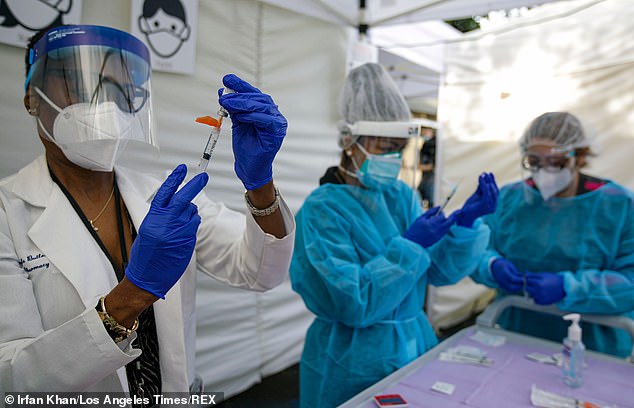 Barbara Ferrer, the Los Angeles County director of public health, said Monday that ‘because there is so much spread, we’re recommending that people wear their face coverings while they’re inside the home’

On Monday, nearly 8,000 people were hospitalized in Los Angeles County, which had fewer than 50 intensive care units available in an area with a population of 10 million people, said Dr. Christina Ghaly, county director of Health Services.

While the county saw a dip in new cases, the director of public health, Barbara Ferrer, said that probably is due to decreased testing after the New Year’s holiday. She predicted another increase in cases from people who gathered together unsafely over the holiday.

Ferrer also said COVID-19 is still killing someone in the county every eight minutes, on average.

There is a sliver of hope, with new hospitalizations statewide down from about 3,500 a day earlier this month to about 2,500.

Some forecasts have predicted the hospitalizations will level off by the end of the month.

Worried WhatsApp is sharing your data with Facebook? Wait 'til you see what Messenger does

Statins side effects: Liver damage and increased fat around the belly could occur

Worried WhatsApp is sharing your data with Facebook? Wait 'til you see what Messenger does 0

Statins side effects: Liver damage and increased fat around the belly could occur 0

The Chasers… as you've NEVER seen them before! 0