Baby tyrannosaurs were only the size of a Border Collie dog when they took their first steps, 70 million-year-old jaw bone unearthed i

Scheana Shay strips down to the NOTHING to show off her growing baby bump at 26 weeks
Pregnant Elyse Knowles uses 'ancient remedy' to turn breech baby before birth
Ellie Goulding's baby has healed the heartbreak rift with her mother, writes ALISON BOSHOFF


Baby tyrannosaurs were only the size of a Border Collie dog when they took their first steps, 70 million-year-old jaw bone unearthed in Canada reveals

When baby tyrannosaurs were taking their first steps they were the ‘size of a border collie dog’ according to a new study of ancient 70 million year old fossils.

Palaeontologists from the University of Edinburgh examined the fossilised remains of a tiny jaw bone and claw found in Canada – dating back millions of years.

The remains belonged to a baby tyrannosaur – cousin of the fabled T-Rex – and are the first-known fossils of tyrannosaur embryos, according to the researchers.

Through 3D scans they found the creature would have been about 3ft long when it first hatched – about the same size as a border collie dog – despite it growing to a mammoth 40ft long when it reached full adult size. 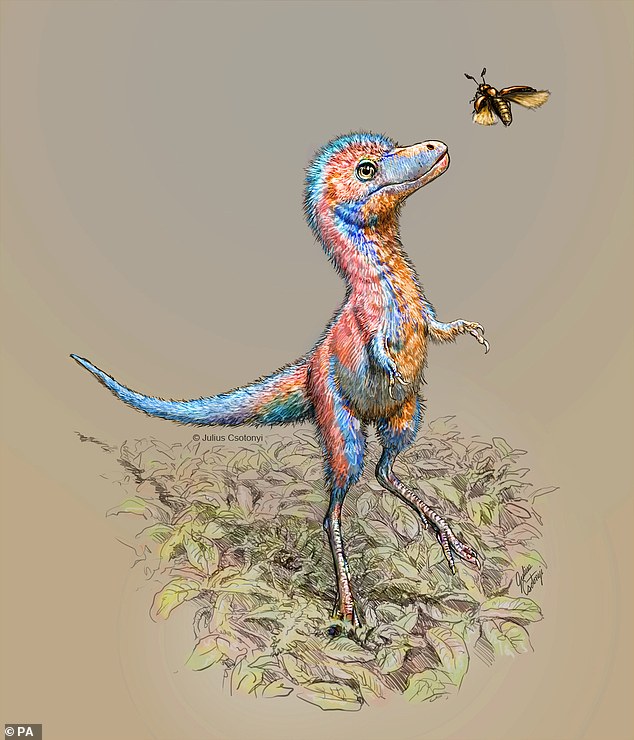 An artist’s illustration of a baby tyrannosaurus which were the size of Border Collie dog when taking first steps, a team of palaeontologists has discovered 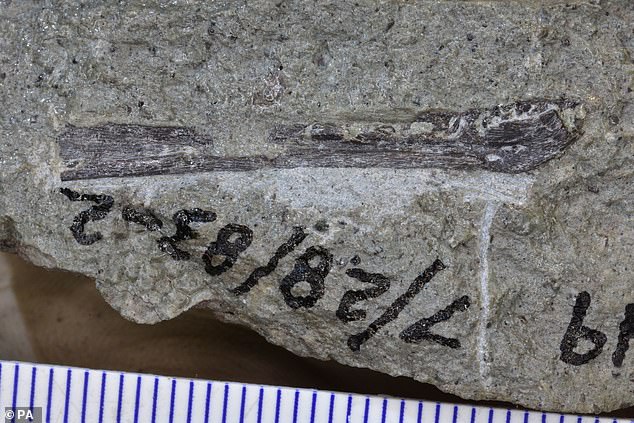 This is part of the fossilised remains of a baby tyrannosaur. Researchers say they underwent considerable skeletal changes throughout their life

Study lead author Dr Greg Funston, said the bones were the first window into the early lives of tyrannosaurs – teaching us much about their size and appearance.

The team has estimated that tyrannosaur eggs – remains of which have never been found – were around 17 inches long.

The jaw bone was about 1.2 inches long and included a pronounced chin – suggesting some physical tyrannosaur traits were present before they hatched.

‘We now know that they would have been the largest hatchlings to ever emerge from eggs and they would have looked remarkably like their parents — both good signs for finding more material in the future,’ Funston said.

Tyrannosaurs lived throughout what is now western North America, on what was then an island continent known as Laramidia 68 to 66 million years ago.

‘Tyrannosaurids were the apex predators of Late Cretaceous Laurasia, and their status as dominant carnivores has garnered considerable interest since their discovery, both in the popular and scientific realms,’ the team wrote. 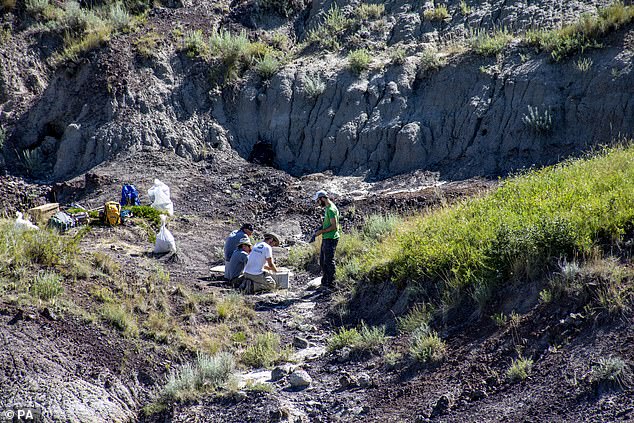 The remains were found in the Horseshoe Canyon Formation in Alberta, Canada and the Two Medicine Formation stretching from northwestern Montana to southern Alberta

‘As a result, they are well studied and much is known of their anatomy, diversity, growth, and evolution.’

Tyrannosaurs rex was a species of bird-like, meat-eating dinosaur.

It lived between 68–66 million years ago in what is now the western side of North America.

More than 50 fossilised specimens of T. rex have been collected to date.

The monstrous animal had one of the strongest bites in the animal kingdom.

An artist’s impression of T. rex

However, only adult and juvenile fossils have so far been found by experts, leaving a black spot in understanding when it comes to their early development.

These new embryo fossils shed light on the early development of the colossal animals, the researchers said.

The team created a series of 3D scans of the delicate bone fragments from the jaw and claw fossils – allowing them to get a picture of the size of the baby dinosaur.

This discovery could aid efforts to recognise tyrannosaurs eggs in the future and gain greater insights into the nesting habits of tyrannosaurs, researchers added.

‘These immature specimens are essential because it is now recognised that the tyrannosaur skeleton undergoes dramatic changes as the creature ages,’ according to the team.

The remains were found in the Horseshoe Canyon Formation in Alberta, Canada and the Two Medicine Formation stretching from northwestern Montana to southern Alberta.

These areas have resulted in the discovery of a range of dinosaur and dinosaur-like species.

‘The fragmentary and isolated nature of the specimens makes it difficult to determine their development stages with certainty,’ the team wrote.

However, there were enough indications, as well as comparisons to other embryo fossils from other dinosaurs, to determine they were from pre-hatched infants.

The study is published in the Canadian Journal of Earth Sciences.

KILLING OFF THE DINOSAURS: HOW A CITY-SIZED ASTEROID WIPED OUT 75 PER CENT OF ALL ANIMAL AND PLANT SPECIES

Around 65 million years ago non-avian dinosaurs were wiped out and more than half the world’s species were obliterated.

This mass extinction paved the way for the rise of mammals and the appearance of humans.

The Chicxulub asteroid is often cited as a potential cause of the Cretaceous-Paleogene extinction event.

The asteroid slammed into a shallow sea in what is now the Gulf of Mexico.

The collision released a huge dust and soot cloud that triggered global climate change, wiping out 75 per cent of all animal and plant species.

Researchers claim that the soot necessary for such a global catastrophe could only have come from a direct impact on rocks in shallow water around Mexico, which are especially rich in hydrocarbons.

Within 10 hours of the impact, a massive tsunami waved ripped through the Gulf coast, experts believe.

Around 65 million years ago non-avian dinosaurs were wiped out and more than half the world’s species were obliterated. The Chicxulub asteroid is often cited as a potential cause of the Cretaceous-Paleogene extinction event (stock image)

This caused earthquakes and landslides in areas as far as Argentina.

But while the waves and eruptions were  The creatures living at the time were not just suffering from the waves – the heat was much worse.

While investigating the event researchers found small particles of rock and other debris that was shot into the air when the asteroid crashed.

Called spherules, these small particles covered the planet with a thick layer of soot.

Experts explain that losing the light from the sun caused a complete collapse in the aquatic system.

This is because the phytoplankton base of almost all aquatic food chains would have been eliminated.

It’s believed that the more than 180 million years of evolution that brought the world to the Cretaceous point was destroyed in less than the lifetime of a Tyrannosaurus rex, which is about 20 to 30 years.

Nancy Pelosi tears into 'the Squad' in new book 0

Holidays: Only 'wealthy and desperate' will be able to travel warns Heathrow boss 0