The Australian Open will begin in Melbourne on Monday as planned, tennis officials have confirmed.

Tennis Australia boss Craig Tiley announced on Friday morning that the results are back for almost all of the 507 players and officials tested for coronavirus on Thursday.

Everyone has tested negative so far with just 12 results pending from those tested on Thursday night. 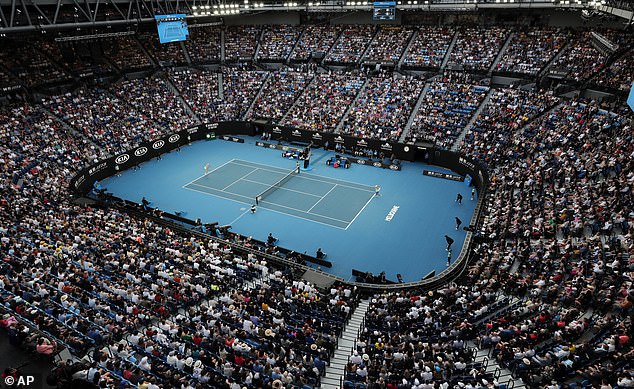 The Australian Open will go ahead as planned and will welcome tennis fans capped at 50 per cent capacity. Pictured is packed Rod Laver Arena at the 2020 Australian Open

‘Hopefully we’ll get the positive outcome in the next few hours that all tests are negative,’ he told Melbourne radio station 3AW.

Tiley hopes fans will still be able to safely attend the two week-long tournament with courts filled to 50 per cent capacity.

‘Spectators will continue to be allowed in the site, and we are still selling tickets,’ he said.

‘The site will be an extremely safe place.’

The tennis grand slam was thrown into chaos on Wednesday night after a hotel quarantine worker tested positive to the highly contagious UK strain of the virus.

Around 520 tennis stars, officials and support staff were identified as casual contacts of the 26-year-old man who worked at the Grand Hyatt hotel.

It forced the cancellation of warm-up matches scheduled to be played on Thursday.

‘For them to freshen up for a day probably wasn’t the worst thing because it was really the only players put in that position yesterday were the ones staying in that particular hotel where the one case came from,’ he told the Today show on Friday.

‘The rest of them were out there actually practising and striking a few yesterday, trying to fine tune.

‘The tough part now is to try to get all the matches in over the next three days before the Australian Open starts.’

Coronavirus vaccine: What vaccine should you have? Is one better than the other? 0

Is this the oldest map in Europe? Stone slab with markings made 4,000 years ago shows part of France 0

A bad omen for 2021? There were 297 wildfires in California in January, nearly tripling five-year average. 0