Rep. Alexandria Ocasio-Cortez spoke on the House floor Thursday night and pushed back at conservative critics who have suggested she's making a 'mo

Sens. Cruz, Durbin accuse each other of lying about stimulus checks to illegal immigrants
Ashley Solis, first woman to accuse Deshaun Watson of sexual misconduct, speaks out: 'I will not let him win'
Tory MPs accuse PM of following 'dates, not data' on lockdown easing


Rep. Alexandria Ocasio-Cortez spoke on the House floor Thursday night and pushed back at conservative critics who have suggested she’s making a ‘mountain out of a molehill’ when recounting her experience during the January 6 insurrection.

‘Sadly, less than 29 days later, with little to no accountability for the bloodshed and trauma of the 6th, some are already demanding that we move on,’ Ocasio-Cortez said. ‘Or worse, attempting to minimize, discredit or belittle the accounts of survivors.’

AOC has been in an argument this week with South Carolina Republican Rep. Nancy Mace after the New York Democrat went on Instagram Live Monday night, to explain how terrified she was during the riot, believing she might die. 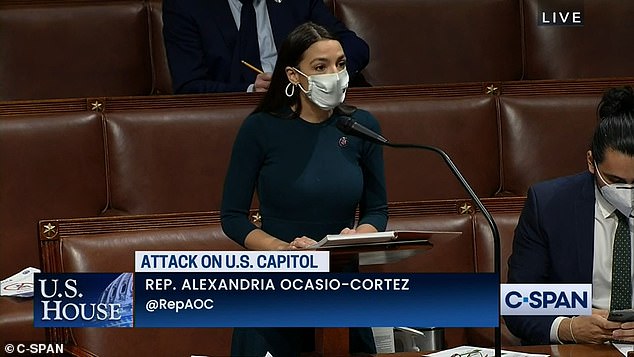 Rep. Alexandria Ocasio-Cortez spoke on the House floor Thursday night and pushed back at critics who tried to say she was making a ‘mountain out of a molehill’ when recounting her experience during the January 6 insurrection 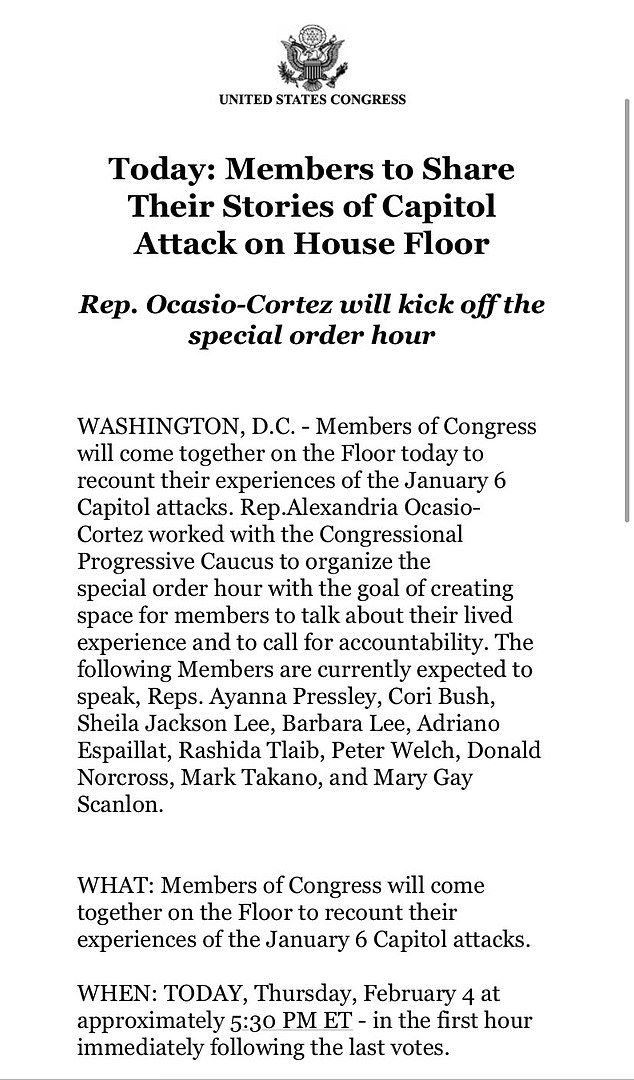 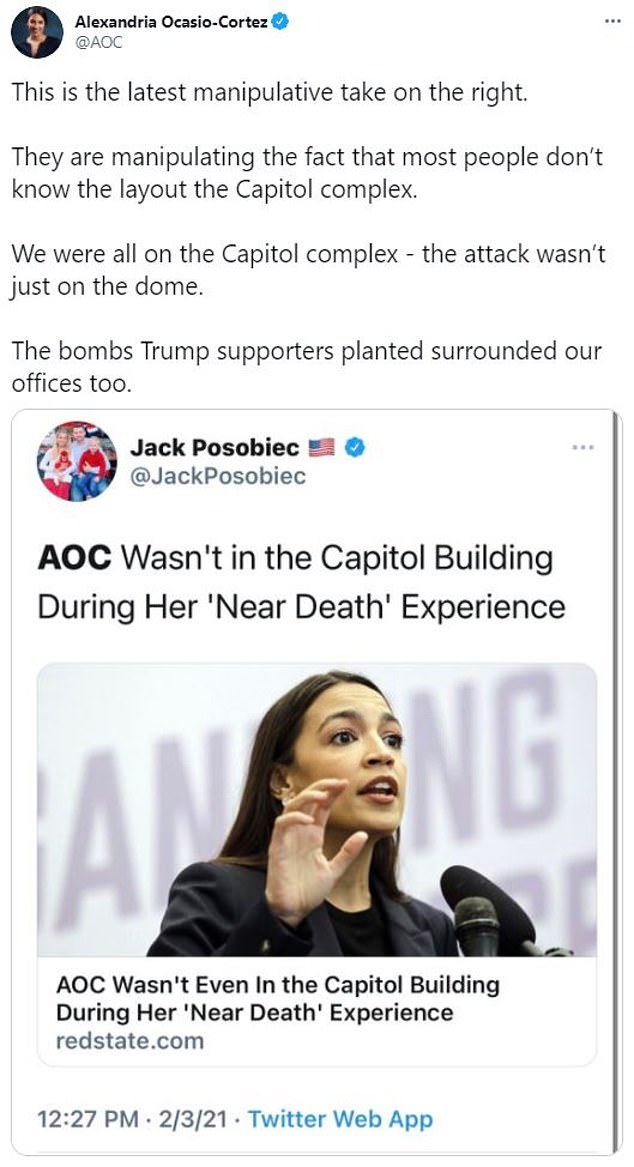 In a tweet Wednesday, AOC called out conservative critics who diminished her experience during the January 6 insurrection by pointing out she was in a Capitol office building 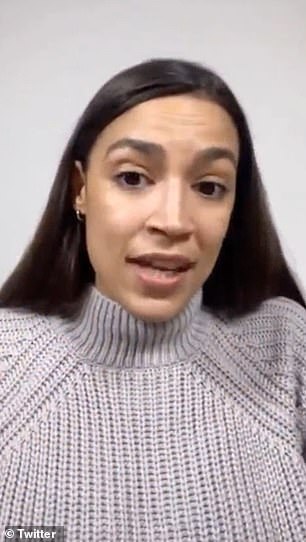 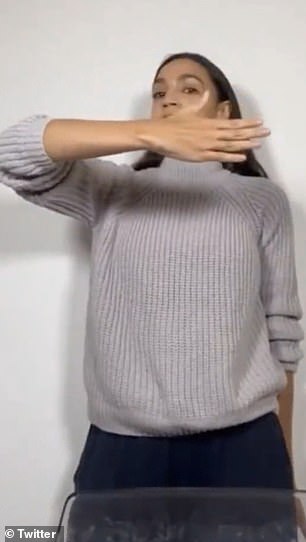 In a Monday night Instagram Live, AOC recounted her experience hiding in her office bathroom and fearing for her life during the January 6 insurrection 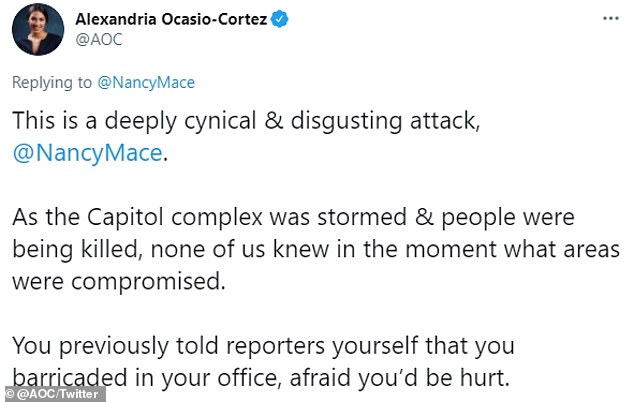 Among the conservatives attacking her this week was Rep. Nancy Mace, who said there were no insurrectionists in their hallway. AOC shot back that ‘none of us knew in the moment what areas were compromised’ 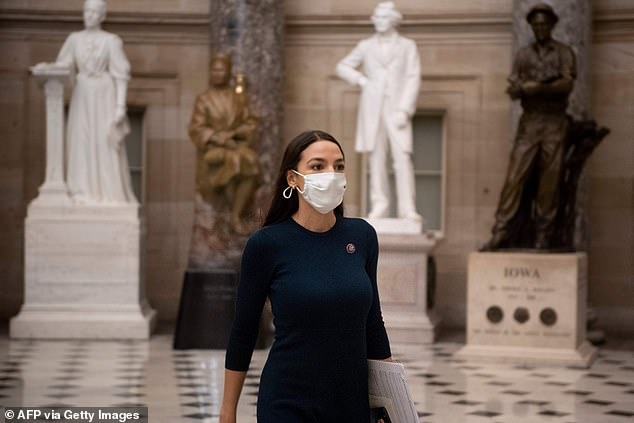 Rep. Alexandria Ocasio-Cortez walks through Statuary Hall on Thursday. She led a special hour allowing her colleagues to speak on the floor about what they observed during the insurrection

Ocasio-Cortez recalled hiding in her office’s bathroom and hearing that someone was after her.

‘I just hear these yells of “Where is she? Where is she?” Ocasio-Cortez said. ‘This was the moment where I thought everything was over. I thought I was going to die.’

The congresswoman than revealed it was a Capitol Police officer who was there to secure her office and ‘was looking at me with a tremendous amount of anger and hostility.’

‘I didn’t know if he was there to help us or hurt us,’ AOC said.

She ended up sheltering in place in her colleague Rep. Katie Porter’s office.

During the Instagram Live, Ocasio-Cortez also revealed she was a sexual assault survivor.

Mace slammed AOC saying that ‘insurrectionists were never in our hallway.’

Ocasio-Cortez hadn’t said that they were, only she had been frightened that they might be.

‘This is a deeply cynical & disgusting attack,’ Ocasio-Cortez tweeted. ‘As the Capitol complex was stormed and people were being killed, none of us knew in the moment what areas were compromised. You previously told reporters yourself that you barricaded in your office, afraid you’d be hurt.’

Ocasio-Cortez pointed to a news story where Mace had told journalists she was hiding in her Congressional office during the insurrection ‘after she voted to certify the electoral votes.’

Mace also tweeted on January 6 that she had been evacuated due to the threat.

Responding to the criticism from the right, AOC organized a special order hour where lawmakers could come to the Hosue floor Thursday night and share their experiences about January 6.

‘Tonight for this special order we will begin to hear and commit to the Congressional record just some of those many stories,’ Ocasio-Cortez said, kicking it off.

During her own turn she talked about the danger in minimizing survivors’ trauma.

‘In doing so, they not only further harm those that were there that day and provide cover for those responsible, but they also send a tremendously damaging message to survivors of trauma all across this country,’ she said. ‘As the way to deal with trauma, violence and targeting is to paper it over, minimize it and move on.’

She said this is the reason trauma victims ‘don’t get care.’

A number of AOC’s top allies chose to speak including Reps. Rashida Tlaib of Michigan and Cori Bush of Missouri.

AOC ended the hour by thanking Capitol Police, food service workers and calling one of her staffers, who stayed by her side that day, a ‘hero.’

He was impeached by the House just days before he left office for his role in inciting the insurrection.

Only 10 House Republicans voted with Democrats to impeach Trump.

Trump pushed the lie for months that widespread voter fraud was the reason he wasn’t getting a second term.

At a rally at the ellipse on January 6 he encouraged supporters to march on the Capitol, where Vice President Mike Pence and members of Congress were gathered to certify the election results.

A MAGA mob ambushed the Capitol and five were killed, including a Capitol Police officer, in the immediate aftermath.

Loading...
Newer Post
Pompeo on Biden declaring 'America is back': 'Back to when ISIS controlled a caliphate'?
Older Post
Christina Ricci is seen for the first time since filing a restraining order against James Heerdegen

If not skinny jeans, then what? Gen Z tells Millennials their jeans are out of style 0