Alexandria Ocasio Cortez on Thursday got into a bitter Twitter spat with Republican Rep. Nancy Mace who she accused of 'minimizing the terror' of t


Alexandria Ocasio Cortez on Thursday got into a bitter Twitter spat with Republican Rep. Nancy Mace who she accused of ‘minimizing the terror’ of the C by pointing out their office building was never actually breached by the mob on January 6 as she fended off claims she’d lied about the experience.

AOC has spoken repeatedly said she feared for her life on January 6 when rioters took over the Capitol. Both she and Mace were in their offices in the Cannon Building – which is 0.3 miles from the Capitol. It was not breached but it was evacuated by SWAT teams.

AOC, in a 90-minute video on Monday night on where she also revealed she had once been sexually assaulted, described seeing a Capitol cop enter her office unannounced, yelling ‘where is she?’

She was hiding in the bathroom and thought he was there to hurt her, she said.

Even after he announced he was a cop, she said he looked at her ‘with tremendous hostility’ and made her afraid. Since then, she has been accused of lying about her experience because she was never in the Capitol Building. Others say she exaggerated.

As the row rumbled on on Thursday, Rep. Mace tweeted: ‘I’m two doors down from AOC and no insurrectionists stormed our hallway’. 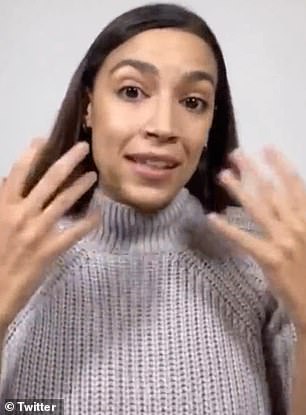 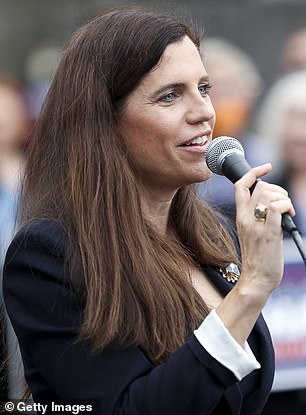 Alexandria Ocasio Cortez on Thursday got into a bitter Twitter spat with Republican Rep. Nancy Mace over their accounts of the Capitol riot. They were in the same building 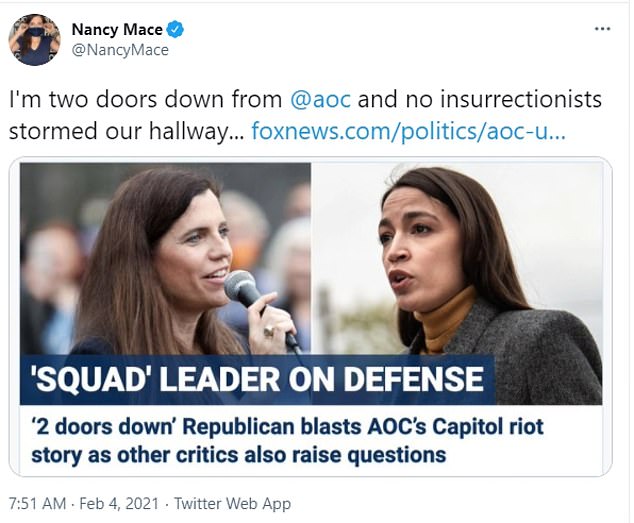 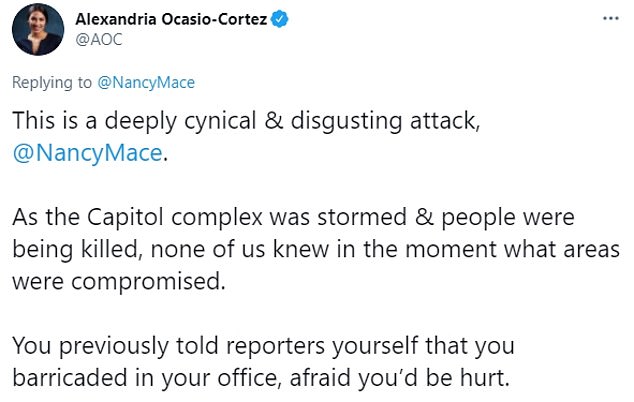 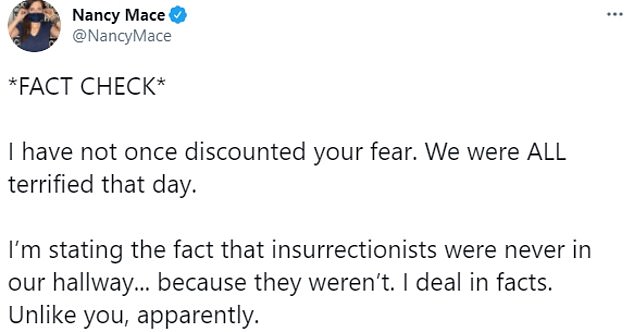 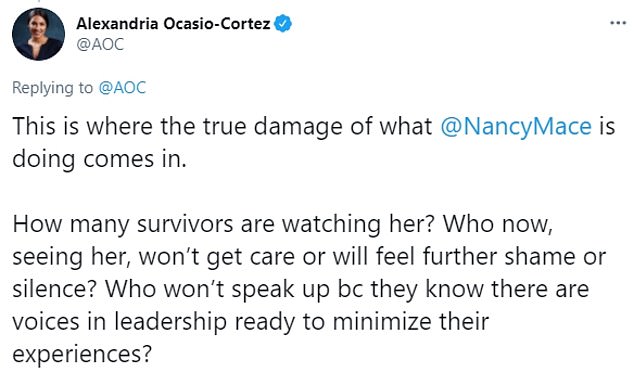 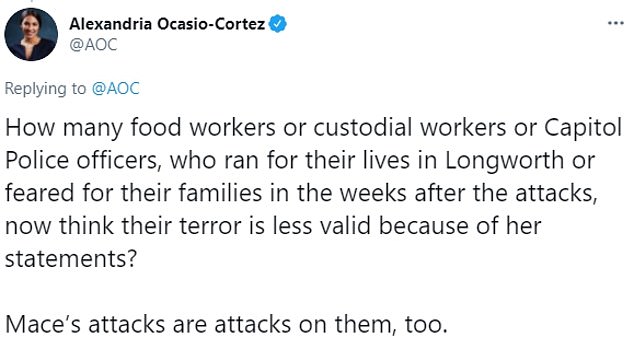 AOC immediately hit back at Mace, tweeting : ‘This is a deeply cynical & disgusting attack.

‘As the Capitol complex was stormed and people were being killed, none of us knew in the moment what areas were compromised. You previously told reporters yourself that you barricaded in your office, afraid you’d be hurt.’

‘This was what you were saying just a few weeks ago,’she said, linking to an interview Mace gave where she said they had all been scared.

‘Now you’re contradicting your own account to attack me for Fox News clicks.

‘It’s honestly pretty sad to see you turn around like this and throw other people under the bus. Thought you’d be better,’ she went on.

‘*FACT CHECK* I have not once discounted your fear.

‘We were ALL terrified that day. I’m stating the fact that insurrectionists were never in our hallway… because they weren’t. I deal in facts. Unlike you, apparently,’ she said.

AOC continued tweeting. She accused Mace of ‘minimizing’ her ‘terror’ and that of everyone else who was in the Capitol complex that day.

‘Wild that Nancy Mace is discrediting herself less than 1 mo in office w/ such dishonest attacks. She *went on record* saying she barricaded in fear. Who else’s experiences will you minimize? Capitol Police in Longworth? Custodial workers who cleaned up shards of glass?

‘All I can think of w/ folks like her dishonestly claiming that survivors are exaggerating are the stories of veterans and survivors in my community who deny themselves care they need & deserve bc they internalize voices like hers saying what they went through ‘wasn’t bad enough. 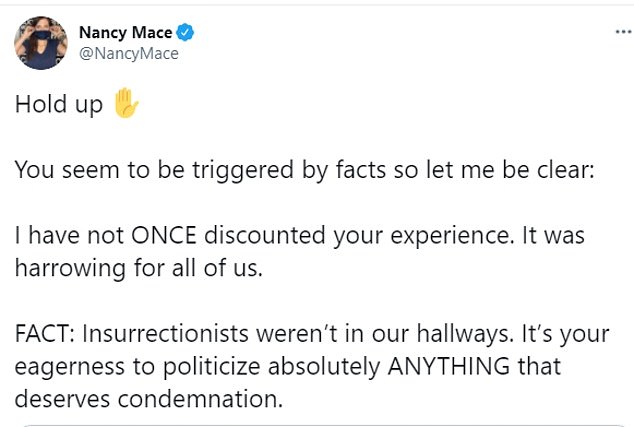 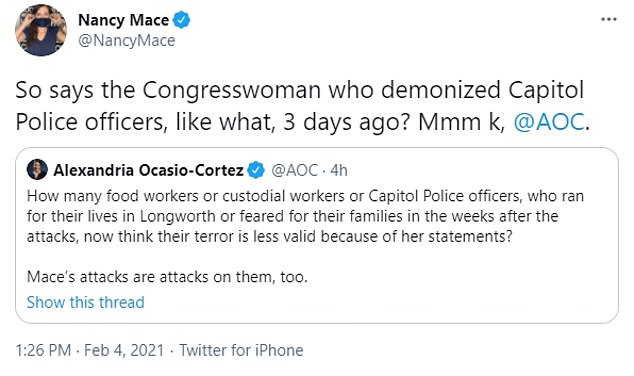 ‘This is where the true damage of what Nancy Mace is doing comes in. How many survivors are watching her? Who now, seeing her, won’t get care or will feel further shame or silence? Who won’t speak up bc they know there are voices in leadership ready to minimize their experiences?

JANUARY 6: I’m okay. Was barricaded in for several hours. I’ll tell y’all about it later.

JANUARY 8: Everyone who was there needs support

JANUARY 13: I can tell you that I had a very close encounter where I thought I was going to die.

‘Many of us narrowly escaped death’

JANUARY 28 TO TED CRUZ: ‘You almost had me murdered’

FEB 1: ‘I thought everything was over…I am processing my death.

‘I thought I was going to die’.

‘How many food workers or custodial workers or Capitol Police officers, who ran for their lives in Longworth or feared for their families in the weeks after the attacks, now think their terror is less valid because of her statements?

‘Mace’s attacks are attacks on them, too,’ she said.

Mace replied again. She read AOC’s tweet as an accusation that she didn’t believe her sexual assault story.

In her 90 minute video, AOC described her interaction with the Capitol cop dramatically.

She reenacted hiding behind her bathroom door and peeking through the gap between the hinge and the wall.

‘I see this white man in a black beanie… he yells “where is she?!”  I have never been quieter in my life…This man is a Capitol Police officer.

‘It didn’t feel right. He was looking at me with a tremendous amount of anger and hostility and things weren’t adding up,’ she said.

The Capitol cops that day were outnumbered by more than 10,000.

The entire Capitol was put on lockdown and people were told to shelter in place – including those in the offices where AOC was.

‘He was looking at me and all of this anger and hostility and at first, in my brain and in my mind, I thought OK I just came from this super intense experience just now, maybe I’m reading into this.

‘Maybe I am projecting something on to him.

‘I talked to G, my legislative director, and he said, “no I didn’t know if he was there to help us or hurt us either.”

‘G was actually like…this man came with so much hostility that G was sizing him up and didn’t know if he was going to have to fight him.

‘We couldn’t even tell, we couldn’t read if this was a good situation or a bad situation.

‘Like so many other communities in this country, just that presence doesn’t necessarily give you clear signal if you’re safe or not,’ she said.

The cop told them to run across the street to the Longworth House Office Building, she said, where Porter’s office was.

‘We can hear, the buildings were not secure yet, that we can like hear all of these rioters behind the glass of the door.

‘I hear the hinges cracking… you can hear all of this screaming.

‘The yells only get louder and louder… so we run to this member’s office start knocking on the door.

‘I realized I had passed by Katie Porter’s office.

‘I saw Katie going into her office just like holding a cup of coffee because all of these developments were happening so quickly… some people were at different urgency levels,’ she said.

Porter corroborated her story and said she consoled her while AOC opened closet doors and told her how she wanted to live to become a mother.

‘I just hope I get to be a mom. I hope I don’t die today,’ Porter recounted Ocasio-Cortez as having told her.

AOC, in her video, then went on to slam the people telling her to apologize to Ted Cruz for claiming he tried to have her murdered.

‘The reason I’m getting emotional in this moment is because these folks who tell us to move on, that it’s not a big deal, that we should forget what’s happened, or even telling us to apologize, these are the same tactics of abusers.

‘I’m a survivor of sexual assault, I haven’t told many people that in my life.

‘As a survivor, I struggle with the idea of being believed.’

She gave no details about the assault or when it took place.