OLEKSANDR USYK has sent an ice-cold warning to Anthony Joshua ahead of their clash. The 35-year-old Ukraine ace dethroned AJ of his WBA, IBF and

OLEKSANDR USYK has sent an ice-cold warning to Anthony Joshua ahead of their clash.

The 35-year-old Ukraine ace dethroned AJ of his WBA, IBF and WBO heavyweight world title belts in September, so they rematch in Jeddah, Saudi Arabia on August 20.

The defending champion, who spent time on the front line repelling Russian invaders before beginning his training camp, is tapering off preparations in Dubai.

And when British boxing legend Amir Khan visited the gym and asked if the former undisputed cruiserweight king was ready, he growled: “I was born ready”.

The undefeated 2012 Olympic gold winner also revealed he has been waking up at 4:45am to squeeze in THREE punishing sessions every day.

The ex-14st 4lbs boss – who boxed as light as middleweight in his early amateur days – has bulked up again for the Rage on the Red Sea.

Before his 2021 points win over Derek Chisora, he explained his ideal weight would be 16st.

But for that Halloween London clash he could only reach 15st 7lbs.

When he dominated AJ at Spurs’ stadium he had managed to hit 15st 11lbs of pure muscle and still be freakishly fast around the ring – while AJ was 17st.

But now he looks well in excess of his dream weight, which could mean Joshua is in for an even rougher night.


Fury's trilogy with Chisora eyed for December at 75,000-seat stadium

SON OF A GUN

'PAINS ME TO SAY IT'


Hearn admits Fury is currently the best heavyweight ahead of Joshua

JOIN SUN VEGAS: GET A FREE £10 BONUS WITH 100s OF GAMES TO PLAY AND NO DEPOSIT REQUIRED (Ts&Cs apply)

After his unanimous decision over Del Boy, Usyk said: “I feel more powerful, since moving up from cruiserweight.

“I put extra weight on my body when I train in the gym and I don’t feel as flexible or sharp as I should but that is only because of the hard work.

“When it comes to sparring and boxing, me and my team will decide on the optimum weight me to fight at.

“I will stay at that weight and it will be ideal for my movement because that is my main skill.” 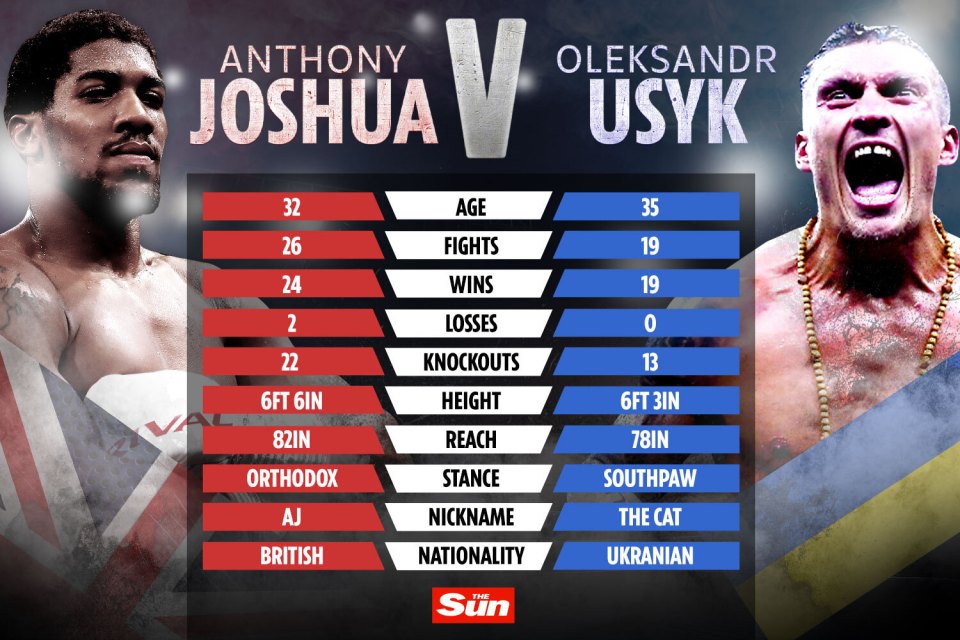 When Usyk visited London for the launch press conference for the rerun, he bumped into Chisora at a Russian spa where they shared a sauna and steam.

And the 38-year-old revealed the crazy training regime Usyk was inflicting upon himself to guarantee success against the Watford icon.

Chisora said: “I was just about to leave the Russian bath house that I go to for recovery stuff, when I am tired and hurt from training, and the owner told me to wait because he had a surprise.

“I sat down on the all I heard was ‘Derek, Deeeerrrrrek’, like he kept saying during the build-up to our fight.

“I started talking and laughing with him and I told him he looked tired.

“But his trainer told me it was true and then showed me a video of him in this huge Olympic pool just going up and down for five hours.”

Biden had COVID fever but symptoms getting better, doctor says 0